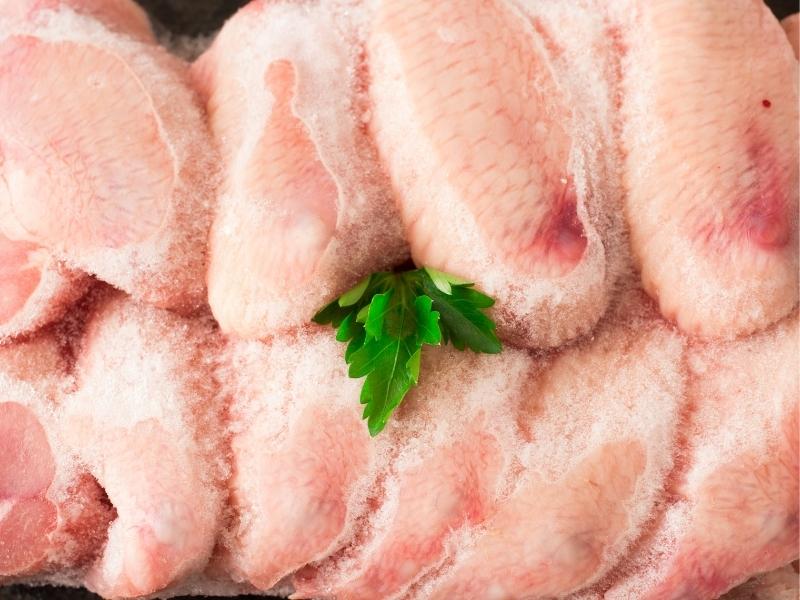 While it’s possible to marinate frozen chicken, it isn’t recommended because the flavors of the marinade won’t be able to properly soak into the frozen meat. As the chicken thaws, the marinade waters down and loses its consistency, potency, and coloration.

Is it Dangerous to Marinate Frozen Chicken? 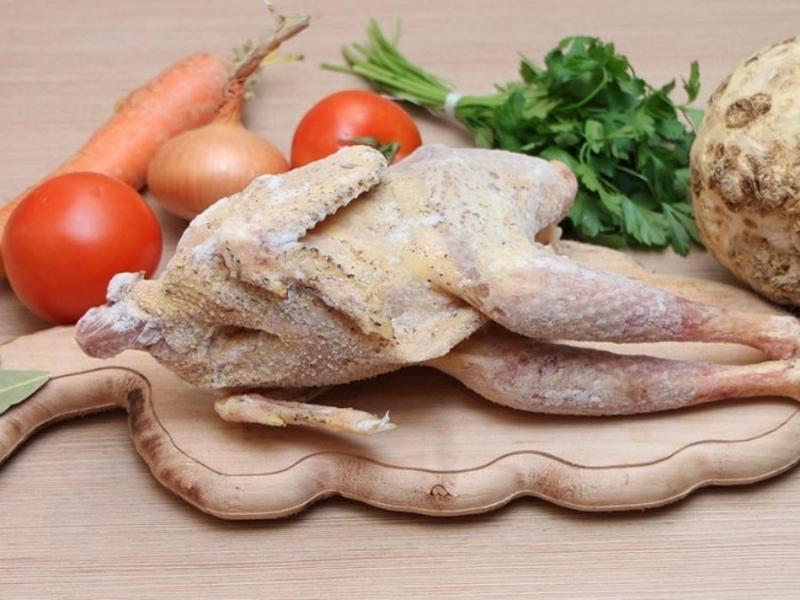 Marinating frozen chicken is safe as long as you take all the necessary precautions to prevent cross-contamination and bacteria growth. Wash your hands before and after handling the poultry, disinfect surfaces the chicken has touched, and don’t thaw the chicken at room temperature before marinating it.

Once defrosted, ensure the chicken is cooked evenly, to an internal temperature of at least 165°F. You should also dispose of excess marinade that contains the chicken’s residues because the liquids could harbor salmonella or campylobacter.

Visit FoodSafety.gov to find out if any of the food products you’re using have been recalled.

How to Marinate Frozen Chicken (& What to Expect) 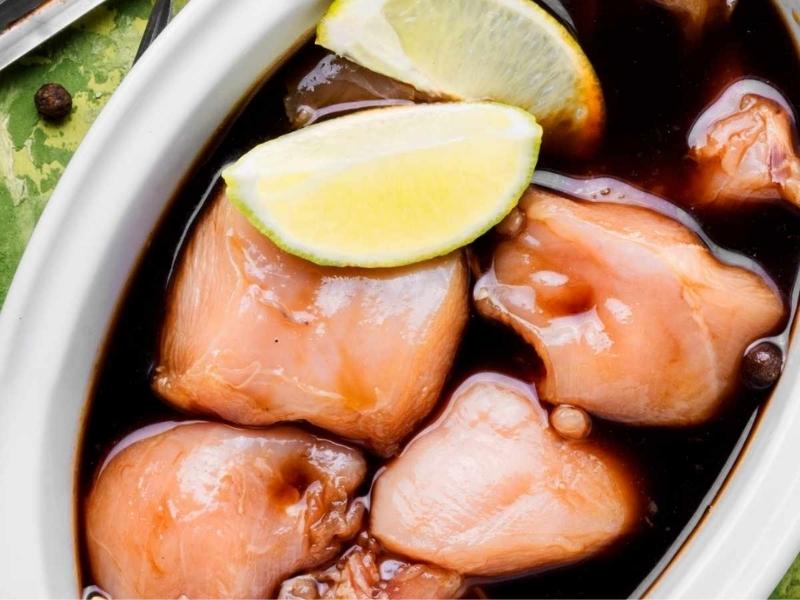 Marinating frozen chicken isn’t ideal because the frozen poultry can’t fully absorb the marinade’s flavors and juices. The water released from the poultry during defrosting also dilutes the marinade.

Most chicken pieces defrost within 24 hours, and the chicken can be marinated while it thaws. Follow the steps below to marinate frozen chicken:

Defrosting the frozen chicken and then applying the marinade is the best approach for flavorful, consistent, tender marinated chicken. There are several methods to defrost chicken, some of which are quicker than others. The fastest methods involve using the microwave or cold water, while the slowest is to leave the chicken to defrost overnight in the refrigerator.

Never defrost chicken by leaving it at room temperature or running hot water over it. These methods aren’t recommended by the USDA and can lead to harmful bacterial growth.

Defrost in the Refrigerator 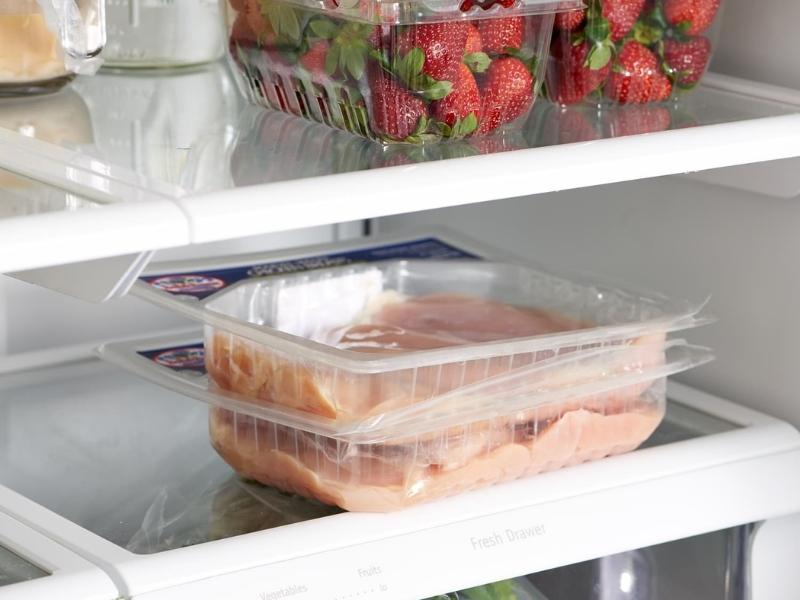 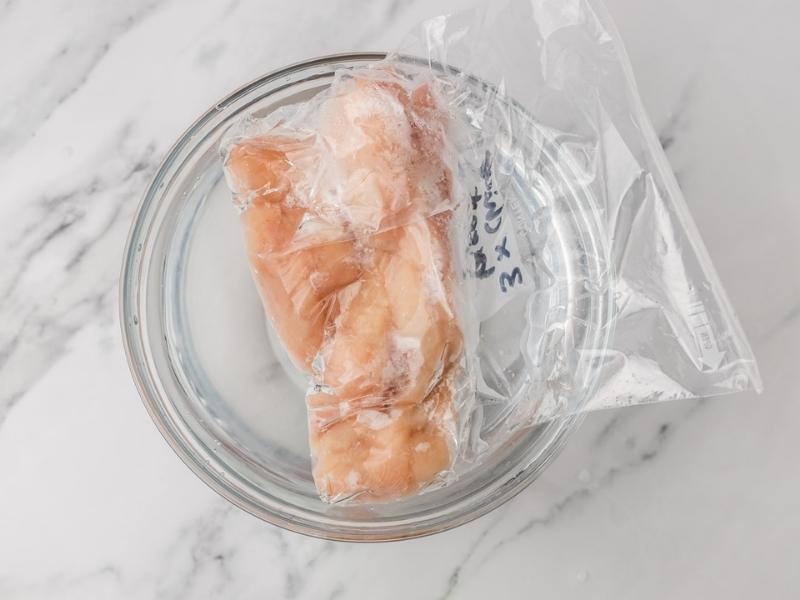 Defrosting chicken in cold water is faster than defrosting it in the fridge, but it takes more work. Put the frozen chicken into a leak-proof, sealed bag, and submerge it in a large bowl filled with cold water, placed on the counter or in the sink. The water temperature needs to stay cool to prevent the growth of bacteria, so change the water every half an hour.

A pound of chicken typically takes up to an hour to fully thaw in cold water, while 4 pounds of chicken can take up to three hours. Chicken defrosted in cold water shouldn’t be stored and must be marinated and cooked the same day.

Avoid using the chicken if the bag splits during the thawing process. While it’ll still defrost, the chicken may be contaminated by bacteria in the air. The chicken may also absorb the water, affecting the poultry’s flavor and texture.

Defrost in the Microwave 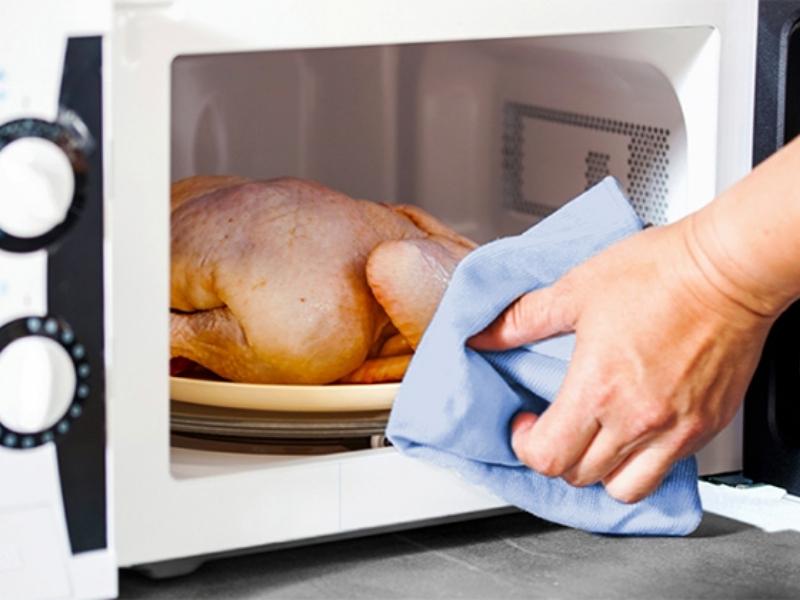 Using the microwave is the quickest method to defrost the chicken. However, this method can cause the chicken to defrost unevenly or start to cook, so extra caution should be taken.

Remove the chicken from its packaging and place it on a microwave-safe dish that’s deep enough to catch the excess water. Use the defrost setting for one to two minutes. Then, check the chicken and see how much it has thawed. Repeat this process until the chicken has fully defrosted, occasionally turning the chicken to help it thaw evenly. 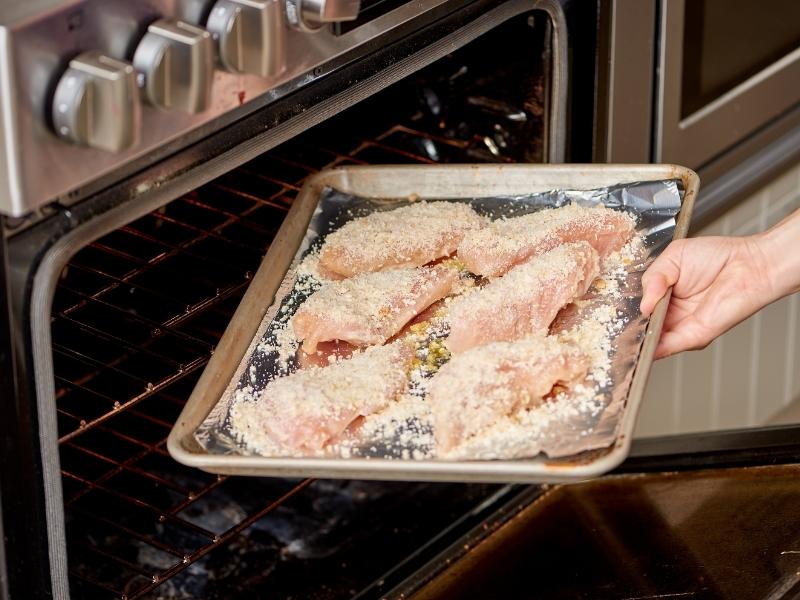 According to the USDA, it’s safe to cook frozen chicken without thawing it first, though this method doesn’t allow you to properly apply the marinade.

To cook frozen chicken, put it in the oven for at least 50% longer than the cooking time advises on the packaging, and if possible, spread out the chicken pieces evenly on the oven tray.

Marinating frozen chicken isn’t recommended because the chicken won’t properly soak up the marinade’s flavor and juices. The best method in terms of flavor and safety is to fully thaw the chicken in the refrigerator overnight, then apply the marinade.

However, marinating frozen chicken and retaining some flavor is still possible, with the right approach. You’ll still need to thaw the chicken overnight and, ideally, prepare double the amount of marinade the recipe calls for. Adding oil or an acidic ingredient can help the marinade better soak into the chicken while it thaws. 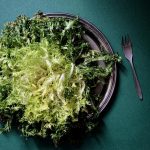 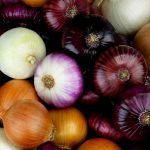