How about sharing a B-52 coffee with friends for the weekend? Whether you’re hanging out with some buddies or just want to chill with a special coffee,  the b52 is the perfect drink for you.


Also called the bifi or bifty –whichever one you prefer, either is acceptable– the b52 is known for its cozy and warm feeling. There’s nothing crazy about it, and it’s the perfect drink to settle down next to a fire with.

You can do so much with this particular kind of coffee, and, if you’re planning a party, you can definitely make this a great part of it. Cool, right? It is not your ordinary, everyday coffee, and it doesn’t pretend to be. The B-52 coffee drink is something better.

Creamy and tasty? Who doesn’t like that combination? And just like any other food, make yours just the way you like it. A little creativity, and you can produce the perfect kind of B-52 coffee suited to your exact taste.

Wondering how this classic coffee cocktail came about?

Its name is attributed to a band, The B-52’s, and is said to have been invented by a bartender, Peter Finch, at the Banff Spring Hotel in Alberta. Peter Finch has been known to name all his drinks after his favorite songs, bands, and albums. The B-52, of course, is not an exception.

The drink began to gain popularity after one of his first customers, an owner of restaurants in Alberta, drank and loved the drink. His love for this drink made him put it on the menu in his different restaurants. For this reason,  the drink is said to have come from Keg Steakhouse in Calgary, Alberta, in 1977.

Another source, however, states that this drink was invented by a bartender named Adam Honigman at New York City’s Maxwell’s Plum.

In 2009, the B-52 became the North London best when Nicklas Bendtner, an arsenal striker, changed his T-shirt from 26 to 52 and was subsequently nicknamed B52. The B-52 slowly gained popularity and, in a very short amount of time, became widespread in many countries. This has, of course, also led to variations of the drink as it has interacted with different cultures and ideas.

What Exactly is a B52 Coffee?

It’s important to know what you’re drinking, so what exactly is a B-52? As interesting as the drink may sound, it’s important to understand what it is before having a cup. 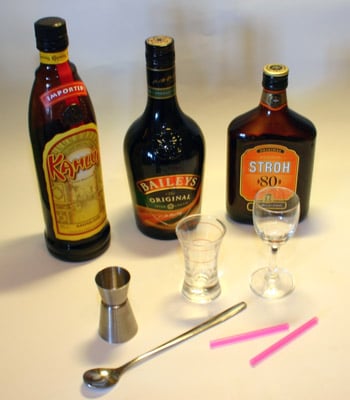 The B-52 is a cocktail made in layers. It is layered with an Irish cream (Baileys), a Grand Marnier (a French brand of liquor), and a coffee liquor (Kahlúa). When made properly, these ingredients should separate into 3 distinct layers.

These three ingredients combine to give this coffee its unique and divine taste.

Sounds like this tripled layered shot is something to look forward to, right?

The B-52 coffee recipe

Who says you have to go to a bar to get a shot or two of this delightful drink? Or did you think it was something you couldn’t make by yourself?

Well, good news: you can enjoy your drink at home without having to take a single step outside your home or spend any extra cash. You can even treat your friends to it as well. There’s nothing better than a homemade food, drink, snack –you name it.

It’s always more fun and interesting because you can get creative with it. Add some variety and try something new. There’s no limit to what you can do with it!

So why not try making one yourself? Don’t panic– here’s step-by-step on just how to make a perfectly layered coffee with no sweat. It’s one of the easiest drinks to make. 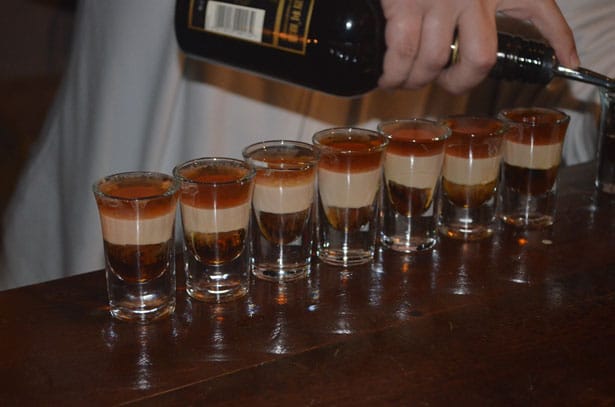 For one serving, you’ll need:

Really quick and simple, right?  The whole process should take you a total of just 4 minutes. However, remember it’s still alcoholic, so don’t get carried away by the taste. 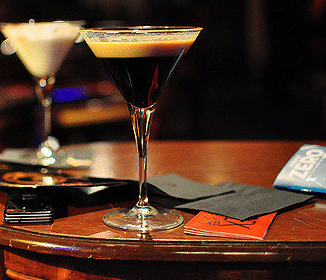 These substitutions might not give you the exact same result as the original ingredients would. The layers may also not be as well-defined. But don’t let that deter you; you never know when you’ll be onto something new!

Variations of the B-52 Coffee

Just like most other foods and drinks, there are variations of the B-52 shot.

The flaming B-52 is a variation of the original B-52 in which the top is inflamed.

The flaming B-52 has almost the same recipe as our original B-52, which, again, consists of Kahlua coffee liqueur, Bailey’s Irish Cream Liqueur, and Grand Marnier orange liqueur. It is layered in the same order of ingredients as our standard B-52 recipe but, this time, with a little layer of rum on top, which sustains a flame and makes the flaming variety different from the popular B-52.

Once ignited, be sure to consume it quickly using a heat resistant straw that should be placed at the bottom of the shot to avoid overheating the glass.

This variety is particularly delightful and loved by many because of the pleasant sight it evokes. 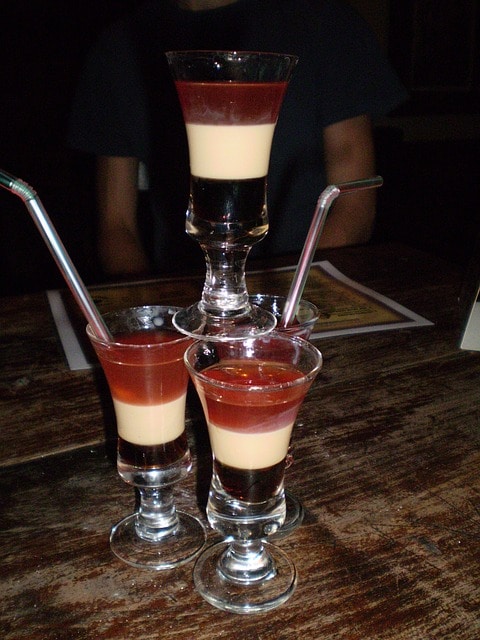 The B-51 cocktail –also known as the B-51 shooter –is the first of the B-50 cocktail series. It is made in the same way with the same ingredients; however, for the B-51, Grand Marnier is replaced with Frangelico hazelnut liqueur.

Just like the B-52, the B-51 is layered, but, this time, in the order of coffee liqueur, Irish cream, and Frangelico hazelnut.

Very simple, and your shot will be ready to be enjoyed in no time.

The B-53 coffee (shot or cocktail, depending on what you find convenient to call it) is the second variation in the B-50 series. It varies a little from the B-52 as the Irish cream used in preparing the B-52 is replaced with  Sambuca for the B-53.

For this one, your ingredients are layered in the order of coffee liqueur, Sambuca, and Grand Marnier. Just like the B-52, this cocktail is very easy to make and takes little or no time before you can drink this delicacy.

Following the B-51 and B-53, the B-54 is next in this series of B-50 shots. This is another variety of the B-52, but it has almond liqueur in place of  Grand Marnier. Its other ingredients– coffee liqueur and Irish cream– remain exactly the same.

The B-54 cocktail is layered in the order of coffee liqueur, Irish cream, and almond liqueur. Just like our B-52, it’s very easy and, within 4 minutes, your cocktail is ready to be served. 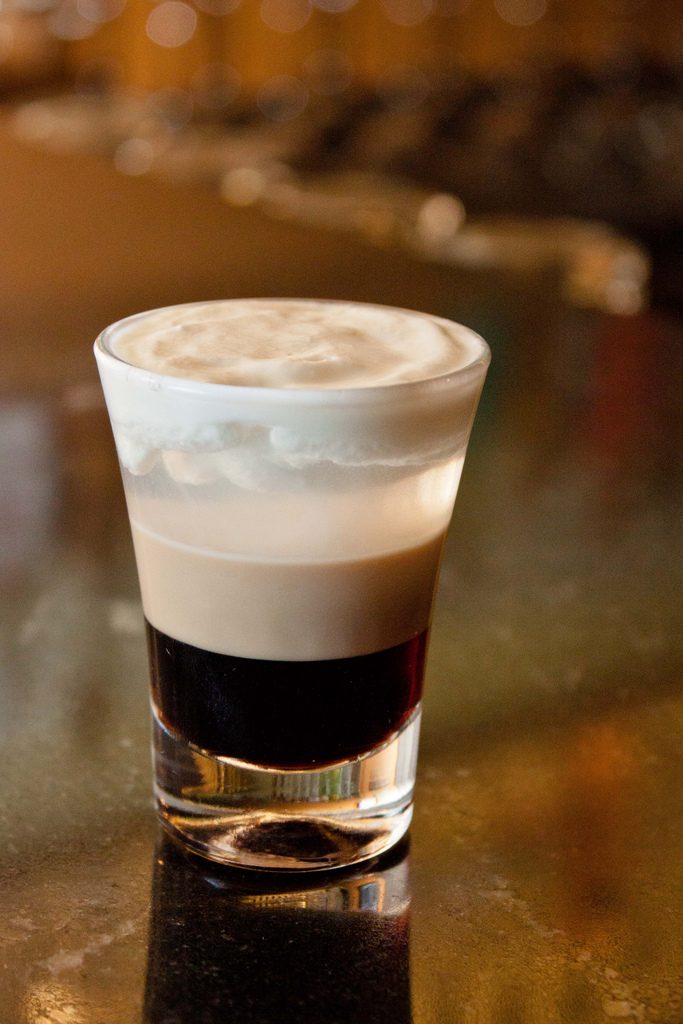 Also known as the B-55 shooter or the B-52 Gunship, the B-55 cocktail is a variation of the b52, replacing Grand Marnier in the B-52 with absinthe. All other ingredients remain the exact same.

To layer, first add coffee liqueur, then Irish cream, and, finally, absinthe. Your shot is then ready to be served.

The B-57 is layered in a shot or glass with coffee liqueur first, peppermint schnapps, and then Grand Marnier. Your B-57 shot is ready as soon as you are done layering. Serve and have fun!

Now that you have the recipe and variations, it’s time to give it a try

We’ve seen what a B-52 shot –or coffee– is, its perceived origin, and the various manifestations it can take. If you haven’t had a taste of this shot yet, what are you waiting for? Take a trip to your favorite bar and ask to have a taste of this cocktail!

If you are open to making one yourself, do not hesitate. Follow the recipe above, and you’ll have yourself a blast. Shots are best enjoyed in the company of friends, so go ahead and invite as many as you can. 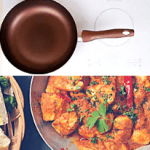 Sex With An Alligator – Cocktail 101