When it comes to the most preferred cookware, cast iron or enameled cast iron usually vie for the number one spot in a home cook’s heart.

Cast iron can usually meet any cook’s needs when it comes to the kitchen, but enameled cast iron pots and pans do have their own advantage. To set the record straight, it’s always better to discuss the pros and cons of both cookware.

Cast iron is technically this cookware’s predecessor. This is because it’s simply cast-iron enameling that gave birth to it. So, one might ask what made this enamel coated cookware just as popular and preferred as its predecessor.

For one thing, this product won’t rust because the enamel coating and iron won’t mix with the food that you’re cooking on it unless you manage to chip the coating.

It’s also more preferable to use this cookware when you want to cook any acidic food like tomato soups or spaghetti sauce, as it won’t do any damage to the cookware.

Seasoning also isn’t needed with this cookware because it’s already pre-seasoned with the enamel coating. They’re also easier to clean and maintain. Not only is the interior surface of the product coated with enamel, but also the exterior part, too, which makes it a prettier pot or pan to add to your kitchen.

One can also consider the enamel cast iron safe because, as mentioned, it doesn’t rust, iron won’t mix with food, and you can cook acidic food on it without damaging the product. 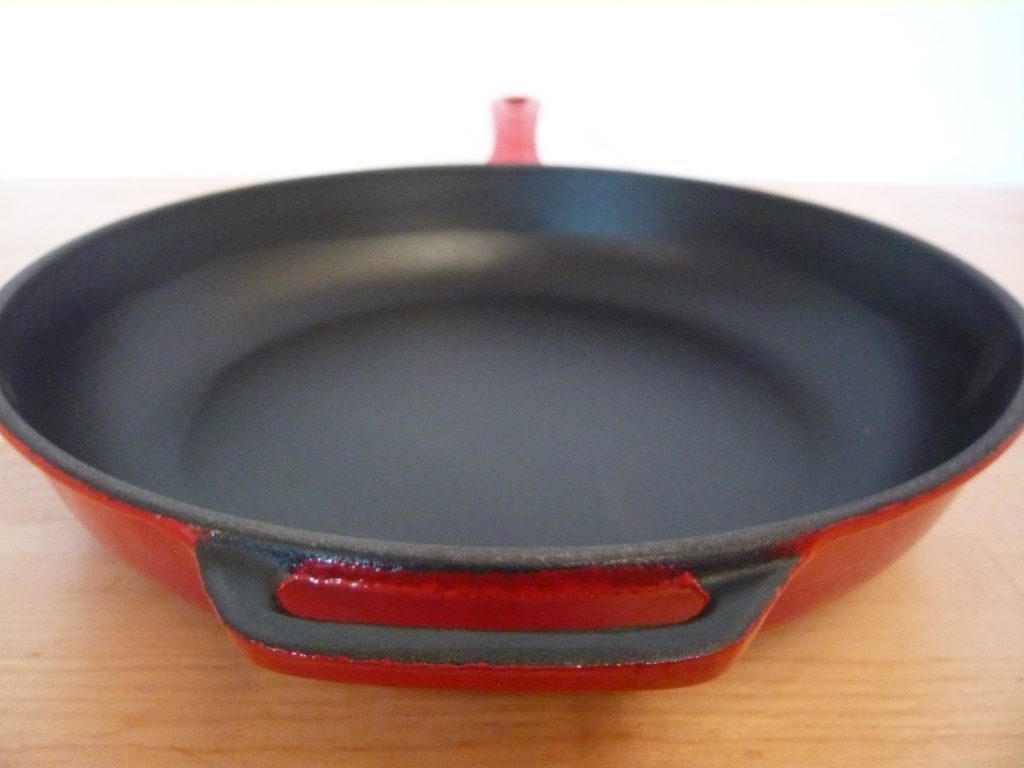 Enamel cast-iron products have the advantage with the cast-iron ones because you will no longer need to season the surface of the cookware. The Lodge enameled cast iron skillet features a porcelain surface that’s easier to clean up than any regular cast-iron cookware.

The exterior part of this cookware is also coated with enamel, and the enamel coating isn’t only meant for appearances, though it does make the product look better. Its other function is that you can use it on any glass stovetop and you won’t have to worry about scratches.

Another great thing about the product is that, since it’s also made out of cast iron, it has great heat distribution and retention capability. The matte black surface also won’t react to any ingredients that are placed on it. This enamel cast iron pan is also durable and weighs a bit more and is oven-safe up to 500°F.

Cuisinart cookware made sure that the porcelain surface of this enameled cast iron pan is made perfect for cooking because it doesn’t affect the flavor of the food that you’re cooking, and the odor of the food won’t stick to the product.

It’s also considerably durable and can be used inside the oven or under the broiler. It retains the heat and evenly distributes it, too, and this is because it is made out of cast iron.

It’s also very versatile so it can be used to sear steaks, braise, or simmer large meals like casseroles. It can also be used on any stovetop and is also compatible with inductions. It’s easy to clean and maintain and is dishwasher safe and has lifetime warranty. 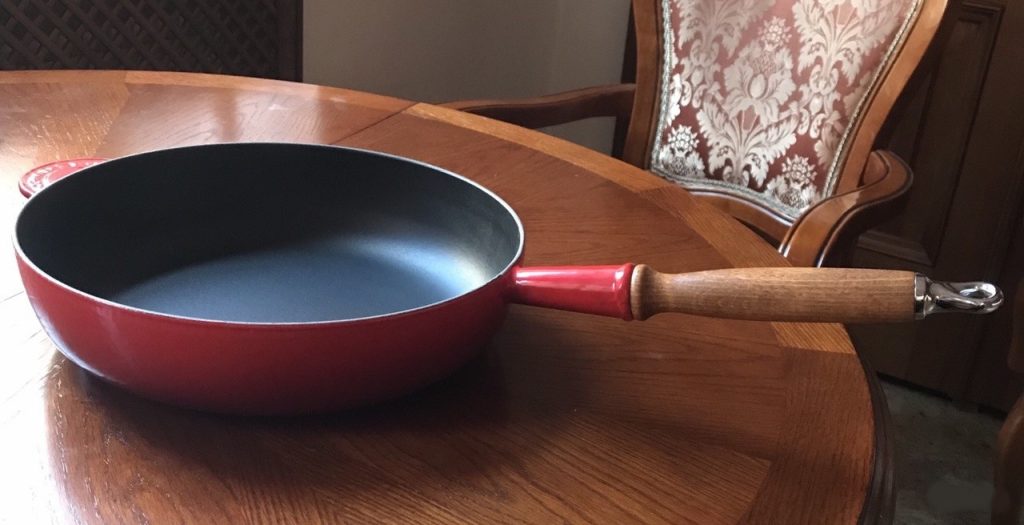 The pan features handle that makes it easier to carry around or use in the kitchen and also allows for comfort and a more secure grip on the product whenever it is being used. The knob that it features is oven safe and allows for easier and durable grip.

It also comes in a variety of colors to choose from and the enamel coating makes it look daintier and prettier, making it a great addition to anyone’s kitchen. With its appearance, it deems the product presentable enough to store food in and use during occasions.

When enameled cast-iron products came into the market, the cast iron comparison became inevitable. Before, cast iron products were preferred in the kitchen because of the benefits and advantages that it provided home-cooks.

The sturdy pans that were made from molten irons have been a part of everyone’s kitchen since it first came out and has gained popularity since.

The cast iron is non-toxic and, although made from iron, iron mixing with food isn’t a bad thing because iron is also needed in your diet. The product can be used in either stovetops or ovens, and since cast irons are known to distribute heat evenly and retain is just as well, it’s an ideal product to use in the kitchen.

They’re also relatively durable and are said to last for a hundred years and they’re also not too expensive. Another great thing about cast iron is that if the product is seasoned well, the non-stick characteristics of the cast iron naturally comes out which gives you a budget-friendly multi-use non-stick pan in your kitchen. 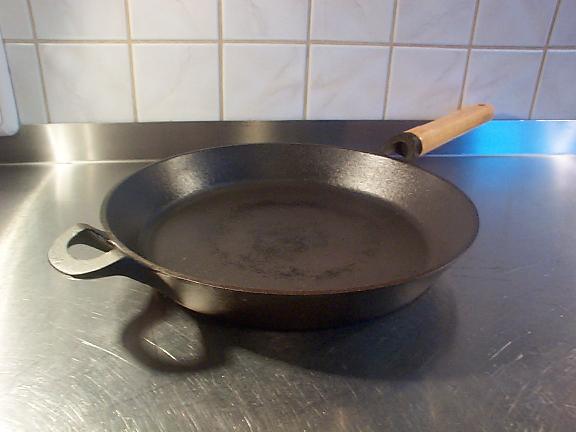 Lodge has been making high-quality cookware since it was first founded in 1896 in Tennessee. Since then, it has always been a brand considered by Americans when it comes to finding a cookware to add in their kitchen.

This cast iron skillet is designed to heat evenly and for long-term use because of its durability. The cookware can be used for searing, sautéing, baking, broiling, braising and frying. The product is already pre-seasoned, and the seasoning only improves as it is being continually used.

Aside from even heating, it can also retain heat and is versatile because it can be used on any cooktop, be it a stovetop, oven, grill or even a campfire. Just don’t try to use it in a microwave.

Because it’s already pre-seasoned, it’s ready to use for to cook any recipe that you want, and it also reduces the use of oils or butter to grease the pan, so the food won’t stick. It also is easy to clean and maintain because all you have to do is to wash it by hand with soap and let it dry or dry it off with a paper towel or lint-free cloth and hang it in a dry place.

Keep in mind that it never mentioned that it is dishwasher safe so that means that you have to hand-wash it to care for it properly to avoid damaging the product. Also avoid using scrubbing the surface of the pan too hard or using any hard sponges.

Lodge has been a brand known for their high-quality and durable products, so if the product is cared for properly, then you wouldn’t have to worry much about it as long as you do your job at cleaning and maintaining it the way you’re supposed to.

A bigger cast-iron skillet is preferred when you want to cook bigger meals. Victoria’s large pre-seasoned cast iron skillet should do the trick for you. The 12-inch cooking area and big pour spouts might make this the choice for you, along with a big assist handle opposite the main handle.

If you’re not yet thoroughly convinced on Victoria’s cast-iron skillet, then you can consider that it’s already pre-seasoned like the Lodge cast iron pan and the pre-seasoned used is a 100% non-GMO flaxseed oil that improves as you continually use the pan for cooking.

It’s also preferred when it comes to searing steaks or making sauces. 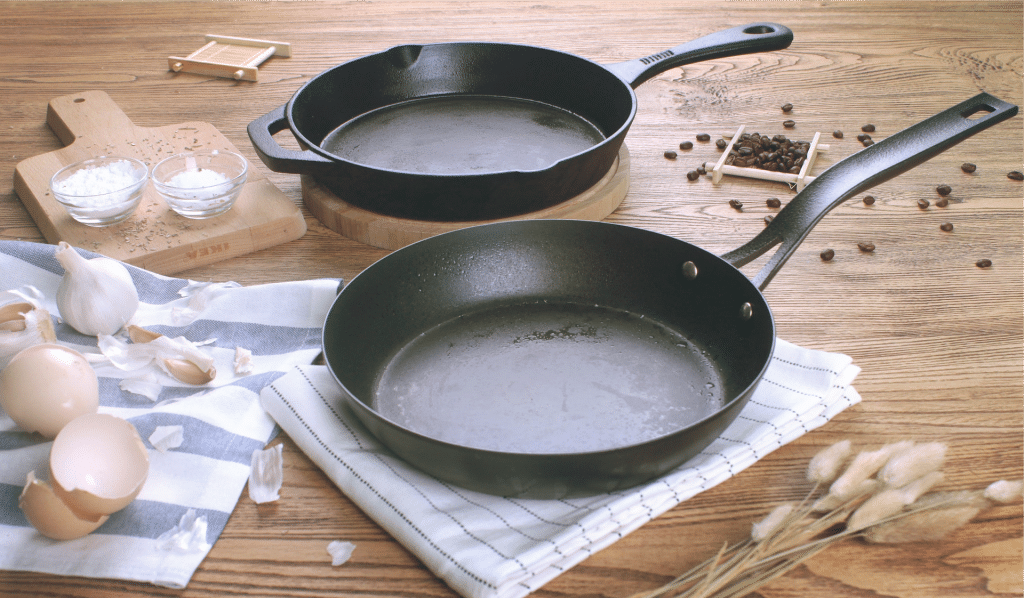 It can be used on any cooktop, be it a gas stovetop, electric or induction, and it’s also oven compatible. The cast iron used is also durable, so it’s meant to last long, and it also claims even heat distribution and heat retention.

Enamel cast iron vs cast iron is a comparison that one will encounter when it comes to delving into the right cookware to use in your kitchen.

While both have their benefits and advantages, it all boils down to which one you deem as worthy to be a part of your kitchen and which one you’re most comfortable with using. Keep in mind that both types of cookware are preferred by many because of the benefits that they offer, and a lot of people consider them superior to other kinds of cookware.

Hopefully, this review has been of help for you and that you’ve decided on which one to purchase!