I can remember growing up when my grandmother would start cooking a holiday dinner. She would always reach for her collection of cast iron skillets. She would prepare everything from gravy to stuffing and even fry up the inners of the turkey in these kinds of ugly looking, heavy things.

I remember her warning me, now don’t you wash that in soap, I’ll show you how to clean it. Little did I know that these heavy skillets that became obsolete for a while in kitchens would make a huge comeback.

Lodge has made a lighter version of my grandma’s cast iron skillet would make a comeback in a huge way. But if you don’t take my word for it, check this out and see for yourself:

When you set out to buy a cast-iron skillet, always look for ones that come seasoned. Lodge has taken the work out of doing this research for you.

Not only does the skillet come pre-seasoned, but they can accommodate any size you want from a three-inch skillet all the way up to a 15-inch skillet.

Lodge has also found a way to make the cast iron skillet a little lighter than those heavy ones from years ago. It is a benefit for those who want the taste of cast iron cooking because some have trouble lifting a heavy skillet loaded down with food. 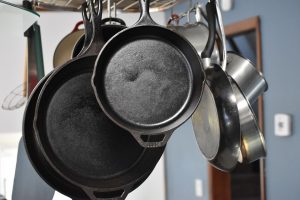 The Lodge cast iron skillet is designed to be more lightweight, coming in a full pound under the competitors. Lodge has also made the handle design much better by not making it too long, but short enough that you will have enough leverage when picking up a full skillet.

They have also put pour spouts for grease draining on these models. They even make a mini three-inch skillet all the way up to fifteen inches to handle the largest of meals.

Lodge has even made the sides two inches high to accommodate splattering that can happen if you fry something. A leather carrying wrap is also included so you don’t have to worry about using a bulky potholder, which can make carrying awkward.

Care and Clean Up

Lodge has made this cast iron skillet and easy to clean. As with any other cast iron cookware, you have to handwash it. It is recommended to wipe it out and season it after cleaning with grease or oil, whichever you choose.

You should store them in a place that they can be kept away from other dishes to preserve the seasoning. I usually store mine in the oven.

I learned about cast iron from my grandmother, as I said earlier. What I love about these skillets is that you can literally mix up a cake in whatever size skillet you want and pop it right in the oven. I had never thought about doing that until I was in girl scouts.

Our troop leader came prepared and taught us how to cook over a fire with a grate using a cast iron skillet to make biscuits and eggs, and we even baked a cake. I have not found may pots and pans over the years that I can use indoors and outdoors over a fire.

The significant part of its versatility as well is you can add all the ingredients to bake something, mix it up right there, and you are good to go. Puts a whole new meaning to “easy peasy.” 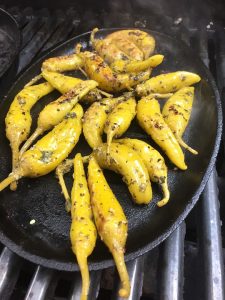 Other Factors to Consider

Lodge has found a way to make the seasoning process better for your skillet. They have made an even, yet somewhat rough surface that will help increase the absorption of the seasoning you use.

It is a rather smart idea when it comes to the concept of seasoning and keeping that seasoning absorbed in your cast iron skillet. Half the taste of food cooked in a cast-iron skillet is all about the seasoning anyway.

The idea that a company has made a large cast-iron skillet that weighs in at about five pounds with a perfectly designed handle is not only smart but clever as well. I mean, the major drawback for those wanting to cook with cast iron skillets is that they are so heavy. At least for me. I remember trying to lug those things around my grandmother’s kitchen. It was hard.

So, the purpose of this? None. Not only that, being exposed to different levels of heat, my expensive cookware burned food anyway.

Cooking with cast iron skillets from Lodge, I tested the theory of non-stick. It does live up to the non-sticking theory, which was surprising. I had not had cast iron cookware in the past and food not stick to it.

When I am looking to purchase cookware, I always look into how the company is when it comes to customer service and backing their products. Lodge does not have a written warranty that comes with it, but they have a disclaimer on their website that assures customers that they will always back their product if there is ever a problem.

They have well-trained customer service reps who are there to lend a hand and solve any problem you may encounter with a purchase or product. That is important when I am spending hard-earned money. It is hard to find perfect quality products these days that always seem to break the day after the warranty is expired.

When researching customer service about products I am buying, I do read customer reviews. Mainly on Amazon because they have a fairly easy to navigate customer review section. 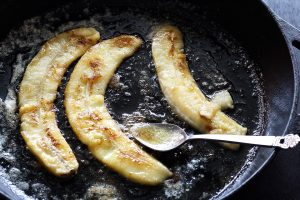 She was impressed that she was able to bake in it and make a cake that she would normally make in her restaurant, and it turned out just as good as if she was cooking in a five-star restaurant. The best review I saw was from a new mom who just got married. She was given the skillet set for a wedding gift.

She said she was scared to death to try cast iron cooking because she heard the horror stories. But she said she got the skillet out and decided to make her new husband homemade sausage gravy and biscuits, and she was so happy when everything turned out perfect, and her husband was delighted. That makes me confident when a new wife can feel confident preparing food for her new family.

To sum it all up, if you are looking to transition to cast iron skillet, Lodge is offering a great set that can accommodate large and small families.

With the variety of sizes offered, you can prepare everything, including dessert, to feed a large family, finicky guests, and even feed your family at the gatherings. The Lodge series of skillets will last for years, are easy to maintain and season and will back their product if you ever have a problem.

I do not normally recommend cookware or think of buying cookware as a gift. I am also set in my ways, and it is hard for me to convert to new cookware and presume to buy anyone gifts. For women, the kitchen is sacred ground (ask any husband).

That being said, I would not think twice about buying friends and family the Lodge cast iron skillet sets. As I get older, I like to make use of what I have. I am a camper. I like that I can pack up a skillet or two and use this when I go camping and not have to buy separate products to serve the same purpose at home or away.

Versatility, good reviews, great design, and a company willing to stand behind its product is what I look for, and Lodge delivers in all these areas.