People who take cooking seriously tend to really like their fancy chef’s knives. The reasons are pretty simple. Food prep is not the most glamorous task in the world, so anything that makes it go by faster, more smoothly, and in a more enjoyable way is cherished. This means that we want our tools to be efficient and enjoyable to use.

Fancy knives fulfill both criteria. They’re sharp, meaning that they enable you to quickly get through any task that involves slicing, dicing, or chopping. The sharpness also allows you to show off your knife skills and utilize advanced techniques to get through your prep faster. They’re also comfortable and nice to look at, meaning that you actually enjoy having an excuse to pull out your knife. This can transform the drudgery of cutting vegetables into something that’s much more enjoyable. 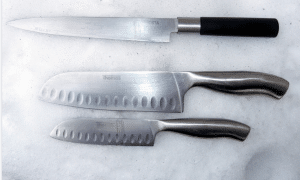 Modern knife manufacturers make knives in many different styles. When you’re buying your first (or second, or third, or fifteenth) chef’s knife, one of the most important decisions you have to make is which broad style of knife you want.

The two big categories these days are German and Japanese. Let’s break down the important distinctions between each type of knife so that you can make an informed choice between the two.

When you think of a chef’s knife, you probably think of the German variety. German knives are heavier than their Japanese counterparts, tend to be made from softer metal, and usually have a larger angle. This means that they require more frequent sharpening and tend to be slightly less sharp overall. 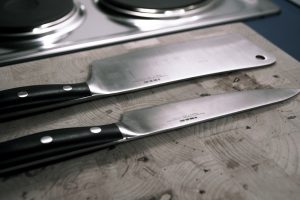 Believe it or not, this can be a good thing. While Japanese knives are sharp and light, they’re also thin and brittle. You can easily chip a Japanese knife by dropping it, using the wrong kind of cutting board, or even by using your knife on certain kinds of hard foods.

By contrast, a German knife is much harder to break. A lot of the situations that might chip a Japanese knife will simply dull a German one. You should still take care to avoid these situations, of course, but when there’s an unexpected bone in the meat you’re cutting there’s much less risk that you’ll ruin your knife forever.

It’s also much easier to sharpen the softer steel of a German knife. While you have to perform this task a bit more often, it takes less time, skill, and effort to get the blade just right. This means it’s often easier to care for your German knives than your Japanese ones.

German knives also tend to have a different style of handle than Japanese knives. They’ll usually have rectangular handles with some curves to accommodate your fingers. By contrast, Japanese knives often have cylindrical handles with no ornamentation at all. Many modern manufacturers make knives in both styles with multiple types of handles, however, so you can find Japanese knives with German-style handles and vice-versa.

A Japanese steel knife is usually sharper, lighter, and harder than its German counterpart. As I mentioned earlier, this makes it a bit more fragile. If you’re willing to care for it properly, however, you can get a lot of mileage out of these attributes. A lighter knife is easier to handle and keeps your wrists, arms, and fingers from getting tired. A sharper knife lets you fly through food prep and make incredibly thin, precise slices, while a hard knife means you don’t have to sharpen your knife as often. 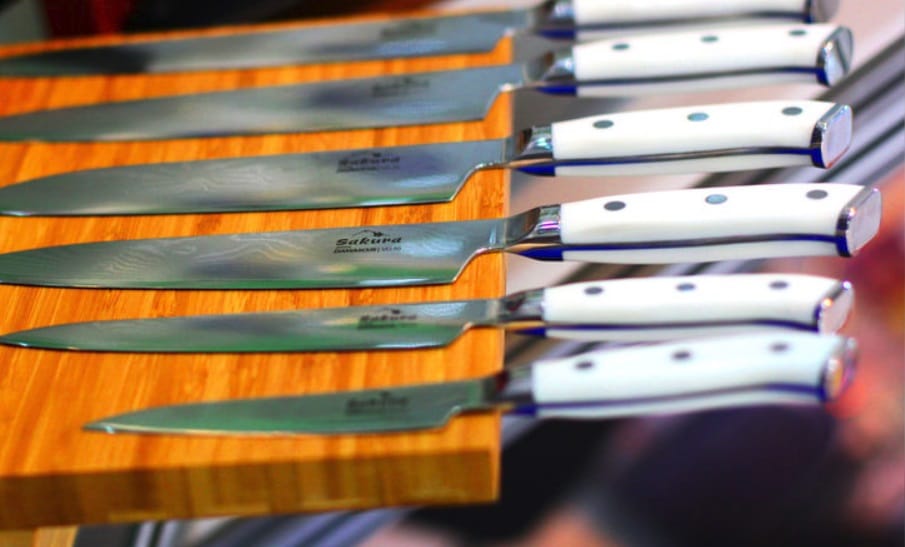 Many Japanese knives are sold with Damascus patterns that run down the blade. This feature doesn’t affect the performance of the knife (in many cases the pattern is a laminate which is literally ground off when the blade is sharpened), but it does make it look pretty cool. You can find some German-style knives with these patterns, but you’ll probably have to look quite a bit harder.

German knives are nearly always sharpened on both sides with what’s called a double-bevel. This means that they can be used in either hand without any problems. Japanese knives, by contrast, are often only sharpened on one side. This means they’re either right or left-handed. It also changes how you cut some foods. Some Japanese knives feature what’s called a “hollow grind” instead, which means that they have an especially sharp, delicate edge.

One variety of Japanese knife you might want to look out for is called a Santoku. Santoku knives are pretty similar to western chef’s knives, but they’re more focused on being chopping tools. They’re long with broad blades and fairly flat tips. They often have air pockets in the blades to help release food more easily. The biggest difference between a Santoku and a western-style chef’s knife is that it’s a lot harder to use the tip of a Santoku to pierce things.

Top Japanese knife brands include Global, Miyabi, and Shun. Most knife manufacturers make Japanese style knives, however, so you can find Wusthof and Henckels-made Santokus and Japanese-style chef’s knives. 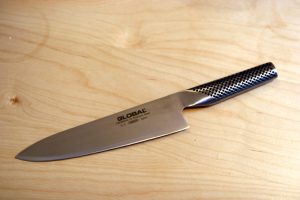 To summarize: German knives are heavier and more forgiving, while Japanese knives are lighter, sharper, and require more careful handling. While these differences can be quite noticeable, you should still get whichever type of knife appeals to you.

Having fun in the kitchen is just as important as all of these other characteristics. If you think that you’ll enjoy a Japanese knife more than a German one (or vice versa), you should definitely get one and try it out.

You’ll love having an excuse to spend time in the kitchen and cook lots of healthy meals. 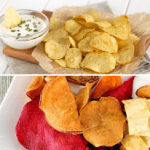 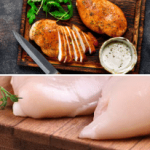