If you’ve never heard of LC Germain knives, you’re not alone. These knives are no longer made but are more than worth knowing about for all you cutlery hunters out there.

After all, they’ve served families for generations, and you can still find an LC Germain knife for sale on websites like eBay today.

We took a deep dive around the Internet to find out all we could about LC Germain cutlery.

What Did They Make?

A thorough search indicates these were well-respected kitchen knives made presumably during the 1970s to 1980s. 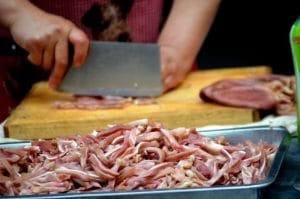 They were not limited to only typical kitchen knives. According to Google images there were also steak knives, meat cleavers, paring knives as well as utility knives available.

Despite the name of the company, this was a Japan-based operation.

Where Can You Buy These?

Nowadays, the only place you can buy these lc Germain knives is on various auction sites. At the time of writing, there was a three-knife set on eBay, which included a 12.75-inch chef’s knife, a 10.75-inch knife, and a third 7.5-inch knife.

There was also a meat cleaver for sale, which at the time of writing was selling for $12.

Based upon the photographs of the items provided, they seemed to be in good condition, if not a little worse for wear after years of use. One listing did talk about the knives being bent a bit, which is to be expected after years of being put to the test in the kitchen.

How Do They Perform?

Users generally liked their LC Germain knives. Users on the Chowhound forums, in a very old thread from 2008, shared both bittersweet and gushing stories about their knives. Although many, if not most, were favorable to the brand.

For instance, user RGC1982 stated, “I got some of these when I got married 25 years ago. I thought they were sufficient until I tried a good Henkel’s chef knife.” RGC1982 then went on to say that they had replaced their entire set of knives. 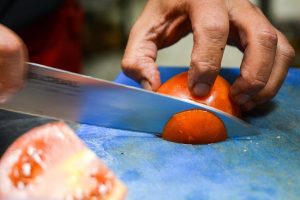 Another user, Joann66, totally disagreed.  This user stated that the LC Germain knives had lasted her a solid 48 years of use. She had found hers at an estate sale and scooped them up immediately.

Despite trying other brands, Joann66 states, “I love my LC Germaines [sic].”

MrReis, another forum user, stated that “I totally AGREE with Joan66. I love my 30+-year-old LC Germain knife set as well.”

And lastly, a user by the name of instantkrma05 stated, “Nice knives, but not expensive. It was $110 for the set with the block.” This user then went on to state that he needed to replace some that were broken and offered an email for anyone that might be able to help.

If you would like to read these posts for yourself, check it out here.

LC Germain is no longer making knives today, but the trademark as of 2012 was filed under Lifetime Brands Inc. The federal status of this trademark is listed as Abandoned—No Statement of Use Filed. You can see the trademark status here.

Lifetime Brands makes kitchenware that many of us make use of in our homes, though it might be unbeknownst to you. Pfaltzgraff, for instance, is part of this family as well as Instant Pot. You will also recognize names like KitchenAid and Farberware.

A visit to the Lifetime Brands website shows that the LC Germain Brand is not listed anywhere on the site. No information about the LC Germain name is available under the “Brands” page or even on the company timeline.

The LC Germain names seem to be one that served families for generations but was left behind in favor of other brands. Would you use an LC Germain knife if given a chance? Let us know!