Last Updated Feb 2023 – Your kitchen’s knives represent a great opportunity to show some personality. They’re vital tools, used in preparing almost every dish (except baking, although you still have to slice apples to make a pie). Many people, myself included, will suggest that you splurge on a chef’s knife you like as your first large kitchen purchase.

If you enjoy doing food prep, it’ll really widen your cooking horizons and help you have fun in the kitchen. Buying an expensive knife that you like is a great way to do that.

Yoshihiro is a high-end knife manufacturer that’s been operating for over a century out of Japan. They’ve only been selling their knives internationally since 2008, so they’re still a bit of a rarity in many countries. 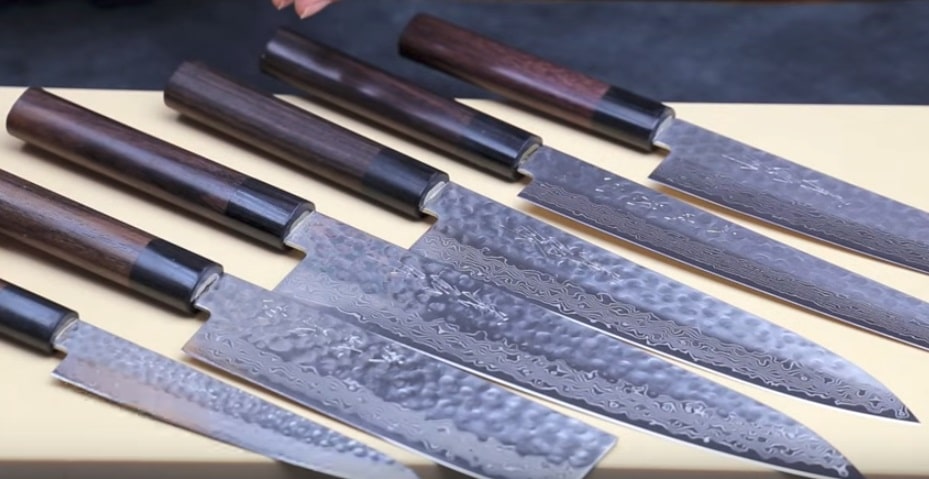 Each knife is handcrafted by master artisans to exacting quality standards. While these knives aren’t cheap, they’re beautiful, sharp, and very well made. Best of all, Yoshihiro isn’t overhyped like some brands (notably Shun) so the knives are surprisingly affordable given their careful construction and kitchen appeal.

One of the most notable features of the Yoshihiro brand is the careful thought put into each knife’s construction. Yoshihiro’s knives feature many different types of metals, many different styles of handle, and many different shapes and designs. This means that you can select an appropriate knife for your kitchen rather than settling for a generic knife with features you don’t want or need.

Before we get too deep into individual knife reviews, it’s a good idea to talk about sharpening. All high-end knives, Yoshihiro included, will require occasional edge maintenance to remain sharp.

This is an upside, not a downside. 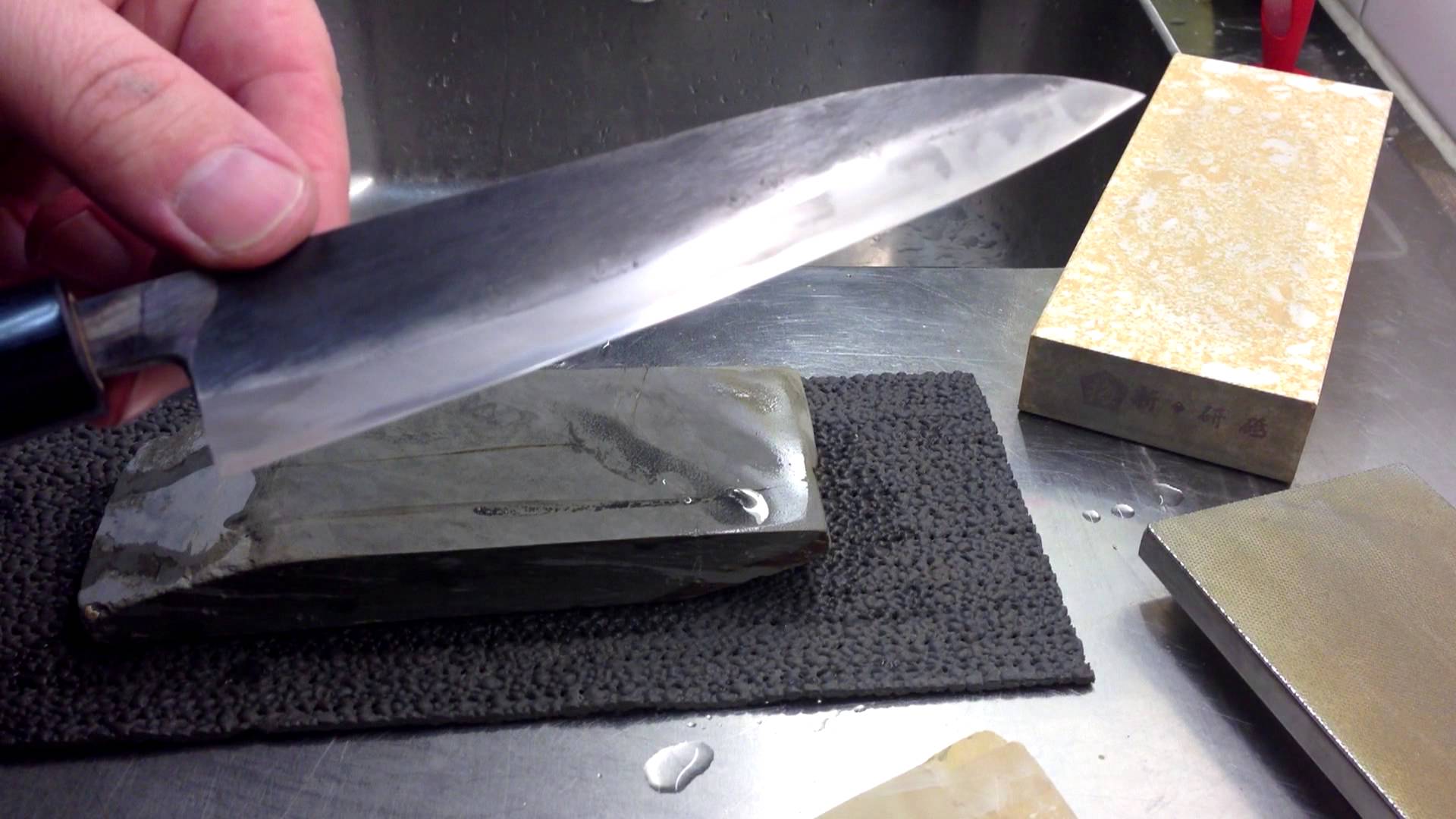 If you’re willing to sharpen your knives occasionally (or visit your local cutlery store and pay them to do it for you), you’ll have very, very sharp knives in your kitchen for many years. Sharp knives make food prep safer, faster, and much more fun.

Yoshihiro knives come sharp out of the box, but you’ll definitely want to spend a bit of time maintaining the edge over the course of your knife’s long lifespan.

You probably won’t get a western-style “chef’s knife” from Yoshihiro. Instead, you’ll want to look at “gyutos” which are the Japanese equivalent. Gyutos are used for the same range of kitchen tasks as western chef’s knives, and they’re shaped very similarly.

In general, gyutos tend to be a bit lighter and thinner, they tend to have a flatter edge (so less curve in the belly), and they tend to use slightly harder steel when compared to western chef’s knives. Again, they behave very similarly in practice. You won’t really notice that much of a difference. 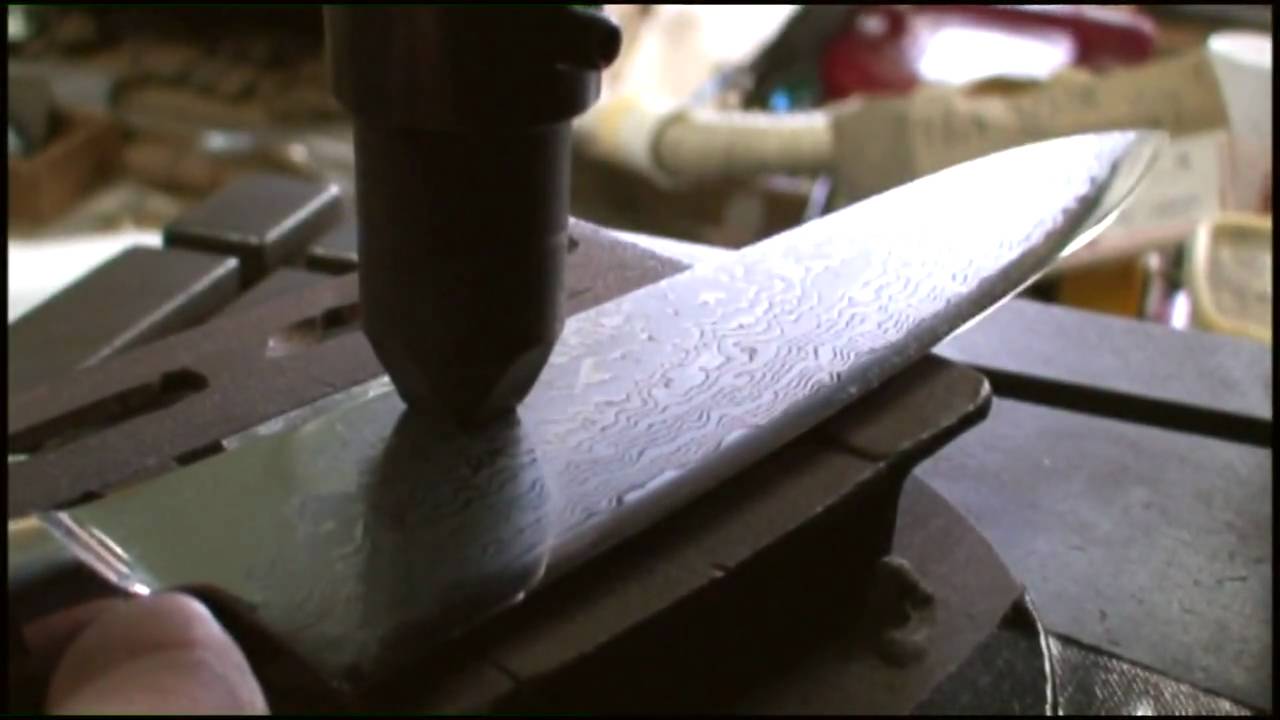 Handcrafted knives are not without downsides. No matter how skilled or careful an artisan is, a defect will occasionally slip through the manufacturing process and wind up in a knife you may receive. With Yoshihiro, this isn’t something you need to worry about.

Their customer service is excellent. If you contact them (especially with pictures), they’re more than happy to replace your defective knife at no cost. Due to Yoshihiro’s high standards, this doesn’t happen often. Best of all, should you contact them, they’ll be incredibly understanding and supportive through the whole process.

Without further mucking around, here are some of the best Yoshihiro knives on the market. Unlike with other brands, however, there’s a lot of variance between Yoshihiro knives. If you know you want a particular feature, feel free to poke around until you find a Yoshihiro knife that’s made exactly to your liking. All of their knives are excellent, so you’ll be sure to find what you want.

This incredible knife is made for western audiences. While its lines are still influenced by classic Japanese gyutos, it’s got a thick 3mm spine , a bit of curve to the belly, and a classical mahogany handle that’s beautiful in its simplicity. In other words, if you want a high-quality Japanese knife but you don’t want something too exotic, this Yoshihiro gyuto is a perfect choice.

Like virtually all high-end knives, this knife is extremely sharp out of the box and features a forged blade with a full tang. It’s clad in water-resistant steel to help it withstand the rigors of everyday kitchen use. When it comes to the blade core, the VG-10 steel is both fairly hard (it’s got an HRC of 60) and incredibly good at holding an edge. You won’t need to sharpen this knife very often.

Instead, it’ll stay sharp for quite a while.

This knife features a double 50/50 bevel at a 15-degree angle. This means that it’s fully ambidextrous, so you can easily use it with either your left or right hand. It’s also a bit more user-friendly than traditional Japanese single bevels. The cutting edge of the blade (the last millimeter or so) has a 70/30 grind in order to increase sharpness. This doesn’t interfere with using the knife left-handed in any way. Instead, it helps it glide through food effortlessly.

I could spend quite a while gushing about how easily this knife cuts through tomatoes or paper or how you can shave with it after you sharpen it. Frankly, however, these features are all pretty standard on high-end knives. You can do all of these things with any Yoshihiro, or any high-carbon forged knife that you’ve sharpened recently. This knife is no different. When you use it in the kitchen, expect excellence.

The aesthetics of this knife are truly wonderful.

It’s got a beautiful Damascus finish that resembles water rippling in a pond and a wonderful mahogany handle. The resulting look is pretty unique and virtually unparalleled at the price of this knife. If you want a high-quality, handcrafted knife with a Damascus finish, you’d be hard-pressed to find a knife cheaper than this one.

Overall, the Western-leaning design, classical handle, and Damascus finish on this knife create an incredibly unique product. This knife is perfect for any kitchen that wants a high-quality Japanese knife that performs like a western chef’s knife, an affordable knife with a Damascus finish, or just an all-around excellent knife with wonderful performance in the kitchen. In other words, it’s hard to go wrong with this choice. 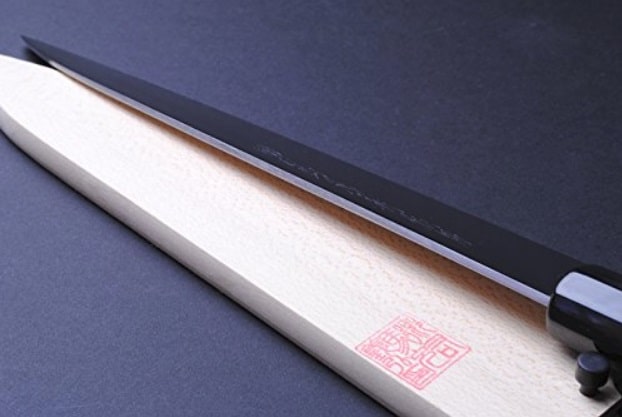 If you want something a bit more exotic than the knife above, this gyuto has a few more Japanese elements in its design and construction. While it’s still got enough curve in the belly for rocking-style cutting, it’s far thinner than the knife above (2mm here, 3mm above). It’s also got a traditional Japanese octagonal handle made from Shitan rosewood. Finally, it features a plain finish instead of a Damascus exterior.

The resulting knife is equally beautiful, just in a different way.

The blade on this knife is forged from Aus-10 stainless steel, which is quite hard. In order to make it even harder, Yoshihiro subjects it to a process called “ice hardening” which makes it even stronger and more resilient. It’s got an ambidextrous (but not symmetrical) complex bevel that’s perfect right out of the box. You’re free to put on whatever bevel you like when you sharpen this knife yourself, of course.

Due to the thin blade, this knife is very light and incredibly fun to handle in the kitchen. It’s perfect for just about any task (as long as you don’t have to cut bones). If you want a great knife with a Japanese-style handle and simple, elegant lines, you won’t go wrong with this Yoshihiro. 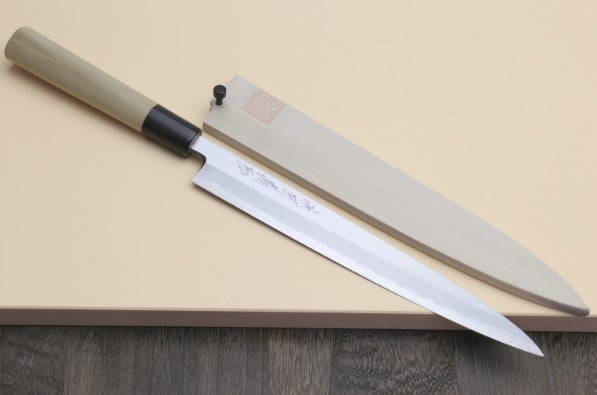 This set of single-edged sushi knives is one of the very best sets on the market. It features three knives: an 11.7″ Yanagi (for sashimi), an 8.25″ Usuba (for vegetables), and an 8.25″ Deba knife (for fileting). The knives themselves are made of Shiroko high-carbon steel (with a HRC rating of 62) and feature magnolia handles in a traditional Japanese style.

Truthfully, you’re unlikely to need these knives unless you’re a sushi chef. This is a darn shame. These are some of the most beautiful knives you’ll find, with bold lines and thoughtful construction. 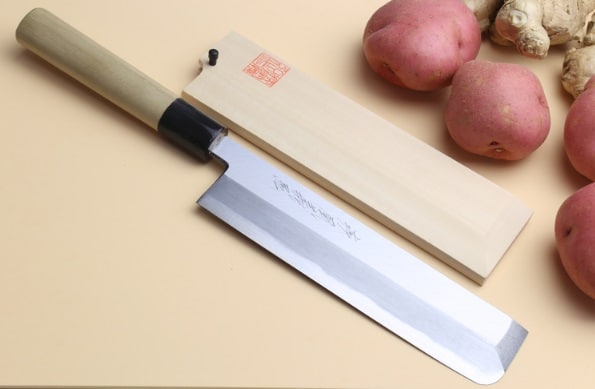 Notably, these knives have a multi-layer construction which keeps the hard, sharp cutting edge safe from everyday wear. The resulting metal sandwich makes a beautiful wave along the side of each knife, right near the cutting edge. This makes these knives a bit easier to maintain than some professional knife sets, although you’ll still need to care for them properly to avoid stains.

If you’re serious about sushi prep (especially if you do it professionally), this is probably the best knife set money can buy.

The knives are incredibly sharp, retain an edge very well, and are made with some of the world’s finest craftsmanship. It is worth noting that like other traditional Japanese knives, these knives are best suited for right-handed use. 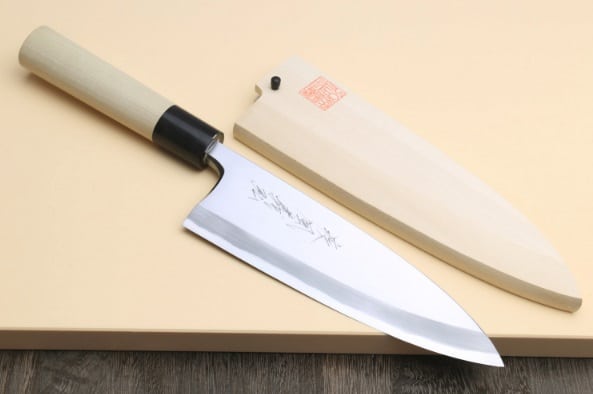 They’re so darn sharp that you can probably get away with using two of the knives as a leftie, but you might still be better off getting a set with the grind on the correct side instead.

This knife set is a bit more suitable for home use by non-professional chefs. While it’s still made with plenty of care and expertise, it features a stainless exterior that makes it easier to care for. 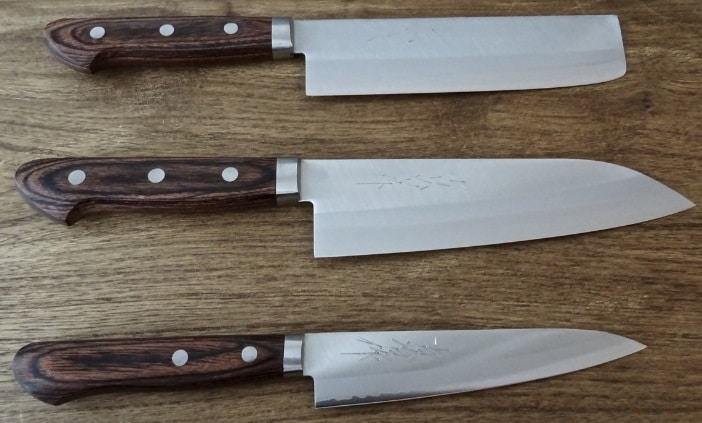 It’s got the same classical mahogany handles as the first knife featured on this page. While these knives don’t feature vivid Damascus lines, there’s a fairly visible wave on one of the knives where the stainless exterior meets the hard interior.

As usual, these are full tang knives with expert craftsmanship. These particular knives are made from gold steel with an HRC rating of 60, which makes them a bit softer than some of Yoshihiro’s other knives. They’re still fairly hard as far as knives go. Each blade in this set is double-edged with a 50/50 grind.

If you want more than one knife, western style handles, and easy maintenance, this set is a steal. It’s incredibly cheap for the wonderful workmanship and high-quality materials featured in these knives. 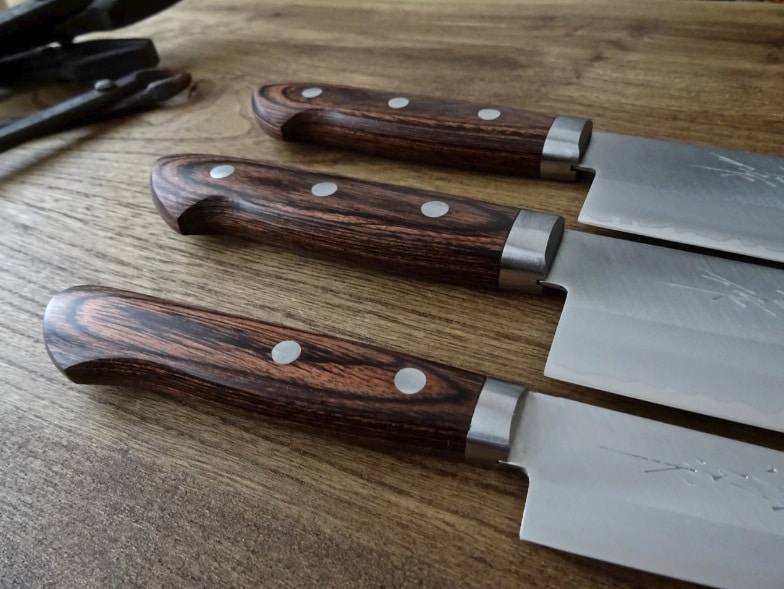 You’ll get three incredibly useful knives at a price that’s lower than some individual Shuns. You’re not missing out on aesthetics, either. These beautiful blades are right at home in any kitchen. 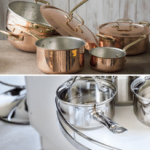 T-Fal Cookware Reviews: Affordable Pots And Pans For Your Kitchen 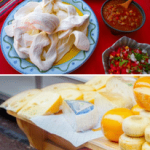 Asadero Cheese: Everything You Ever Wanted To Know!