The blue kamikaze shooter is the drink that looks stunning and is very capable of stunning your senses too.

These alcoholic drinks, blue kamikaze shots, are considered the original shooter recipe by many cocktail historians. Yeah, we actually do have historians on cocktails and drinks.

Blue kamikaze shots can be served either in a shot glass or in a cocktail glass. It depends on how you want your drink—as one quick gulp, or not? Either way, the things you’ll need remain the same. That is, except for the serving glass. But really, the method of preparation is the same.

What is a Kamikaze Drink?

The kamikaze shooter has been around for many years now. According to our cocktail historians, its first documented appearance in the world of cocktails was in the year 1976, meaning it’s considered the original shooter cocktail. 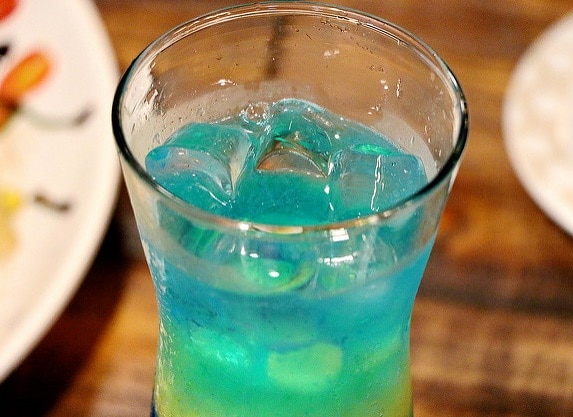 The drink is a favorite among party-goers and non-party goers, especially those watching their diet, due to the drink’s relatively low calorific value. Traditionally, blue kamikaze shots are served straight-up, after the 3 component ingredients have been shaken together and strained.

The traditional kamikaze drink is made with equal parts vodka, triple sec, and lime juice. With just these three ingredients, the drink has gone on to become a classic sour cocktail that is either served in a shot glass or cocktail glass, usually garnished with a lime wedge.

The smoothness of the vodka blends perfectly with the sweet flavor of the triple sec and the refreshing taste of the lime. Kamikaze means divine wind and was a common term used during World War 2.

The word “kamikaze” is a Japanese word, but by no means does it imply that the drink originated in Japan. Actually, some people think it started in an American military base bar in Japan, but no one’s sure for certain.

On the other hand, the blue kamikaze drink, which is a variation of the traditional kamikaze, substitutes the kamikaze traditional sweetener—triple sec—with blue curacao.

The blue kamikaze alcoholic shot gets the “blue” in its name from the blue curacao, which gives the drink a stunning blue color. Blue curacao is an orangey liqueur that’s slightly bitter. Its blue color is actually a result of blue artificial coloring. 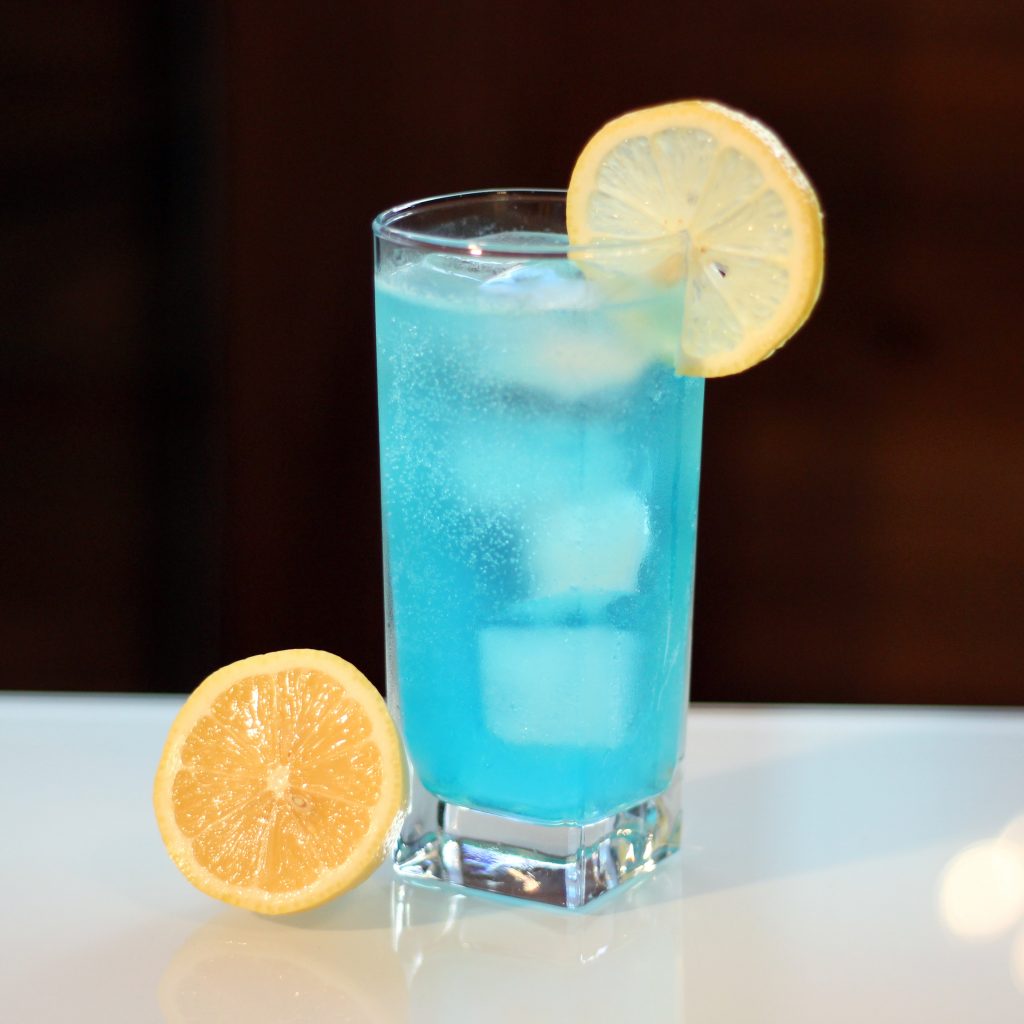 It is an easy and fast drink to make. A shot of this drink is usually less than 100 calories—a good reason why the drink is a favorite.

The drink is fruity and tart with medium alcoholic strength. It is a fruity shot, with lime juice serving as the mixer while the blue curacao and vodka serve as the alcohol components.

Although colorful and kind of sweet, make no mistake that this is an intoxicating drink that clocks in at about 30 percent alcohol.

Tip: Have your glasses chilled before making this drink.

Using a shaker glass or cocktail shaker, add some ice cubes into the shaker before adding the vodka, blue curacao, and lime juice—in no particular order. 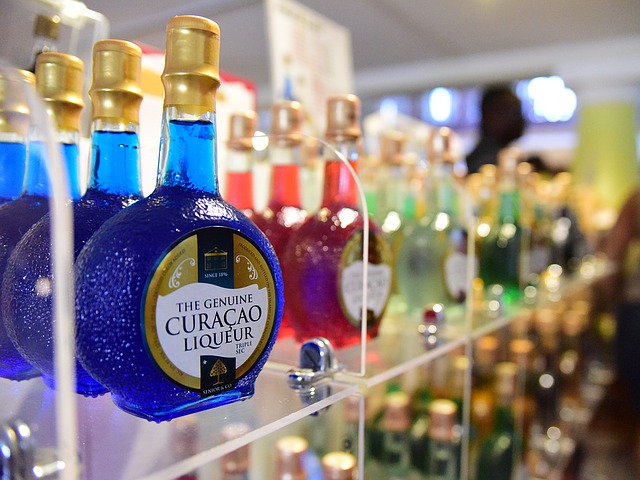 Then, shake well until the mixture is chilled, straining the liquid into shot glasses as blue colored shots (or you can strain into cocktail glasses).

After this, you can then stick your lime wedge onto the rim of the glass, and of course, you know what to do with the lime wedge after downing your drink!

Note: Since the shot is shaken, not stirred, use a Hawthorn strainer. This will retain the finished ice perfectly well, since it’s designed to trap very fine particles of ice and fruit (other drink recipes might call for some) caused by the shaking the mix.

Other Delightful Ways to Make Your Kamikaze Shot

Although the blue curacao vodka shot is made as described above, there are other ways that involve slight changes to the recipe. The changes do not affect the color. If they did, after all, it wouldn’t be blue kamikaze anymore. But, these changes can affect the taste of the shot. Not all changes yield an effect, though.

You do not have to stick to the “equal parts” rule. In fact, the drink tastes better and more refreshing when you go against this particular rule. The quantity of vodka is almost always higher than the quantity of blue curacao and lime juice used. 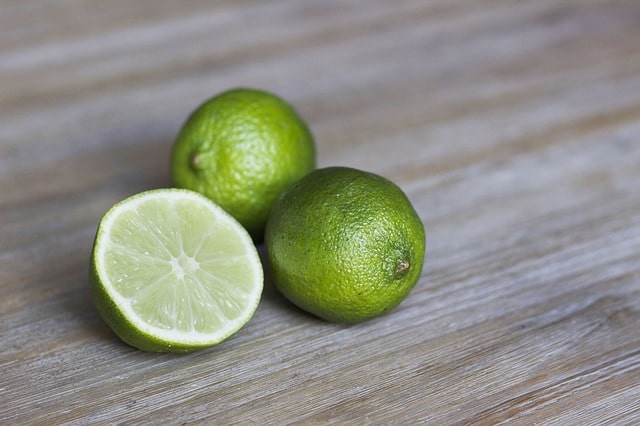 The second way affirmatively answers the question, “Can I use lemon juice? If so, how about fresh lemon juice?”  Many people replace the lime juice with lemon juice, and lemon juice is always a winner, especially when considering its thirst-quenching prowess.

No one said you couldn’t do that, so go for it and get more bang for your (taste) buds. Another thing you can opt-out of is the lime wedge as garnish. You can use a lemon wedge or twist, and for some at least that will be more palatable and easier to suck on.

Try triple sec instead. Although colorless, it has a similar flavor to blue curacao—the citrusy flavor. To make up for this color defect, use a few drops (1 or 2) of blue food coloring. Keep in mind that the blue in blue curacao is also artificial, and without the blue color, it’s just a kamikaze, not a blue kamikaze. 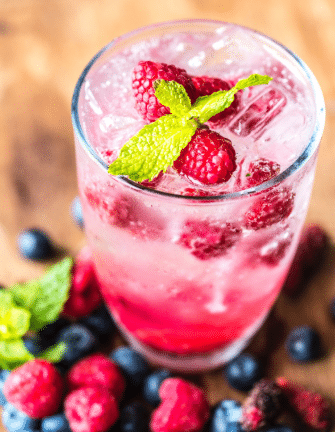 This, just like the blue kamikaze, is an awesome sibling variation of the classic kamikaze.

Like the blue kamikaze, it substitutes one ingredient in the original kamikaze recipe—and this time around, it’s not triple sec but lime juice—for a raspberry liqueur, such as Chambord.

In a glass, mix the 3 ingredients together and serve with ice. These are rarely served straight-up. 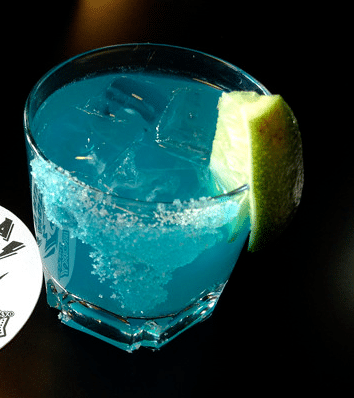 With your bottle of lemon-flavored vodka and a lemon wedge sprinkled with sugar, this chilled shot recipe should be good to go. If you can’t get lemon flavored vodka, use lemon juice with vodka in equal amounts.

If you are using 1 part each of triple sec and lime juice, use 2 parts of strawberry vodka. After filling the shaker glass, shake and then strain the chilled mix into a shot glass. Garnish with a strawberry.

Cranberry vodka, triple sec, cranberry juice, and lime juice are all that’s needed to make the cranberry kamikaze. Use a cocktail shaker to shake the ingredients, then strain into a cocktail glass or shot glasses, if you want a shot.

There are other closely-related drinks, including the blue kamikaze jello shots and the blue lagoon.

The blue kamikaze shooter is definitely a drink worth all the hype it gets. But of course, reading about it takes you only halfway—you have to actually take a shot of it for a great experience. Just don’t forget that this drink can get you really drunk!