Well, you’ve come to the right place. This article discusses everything about brown vinegar, from its production to its usage. The importance of vinegar in everyday cooking cannot be denied. From sauces to condiments, marinades to soups, salads to stews, it is used to enhance flavors to a whole new level.

What is Brown Vinegar?

So what does malting do to barley?

Malting is a process in which the starch present in the barley is turned into maltose, which is later converted into vinegar and has a dark brown color, which gives the vinegar its name. 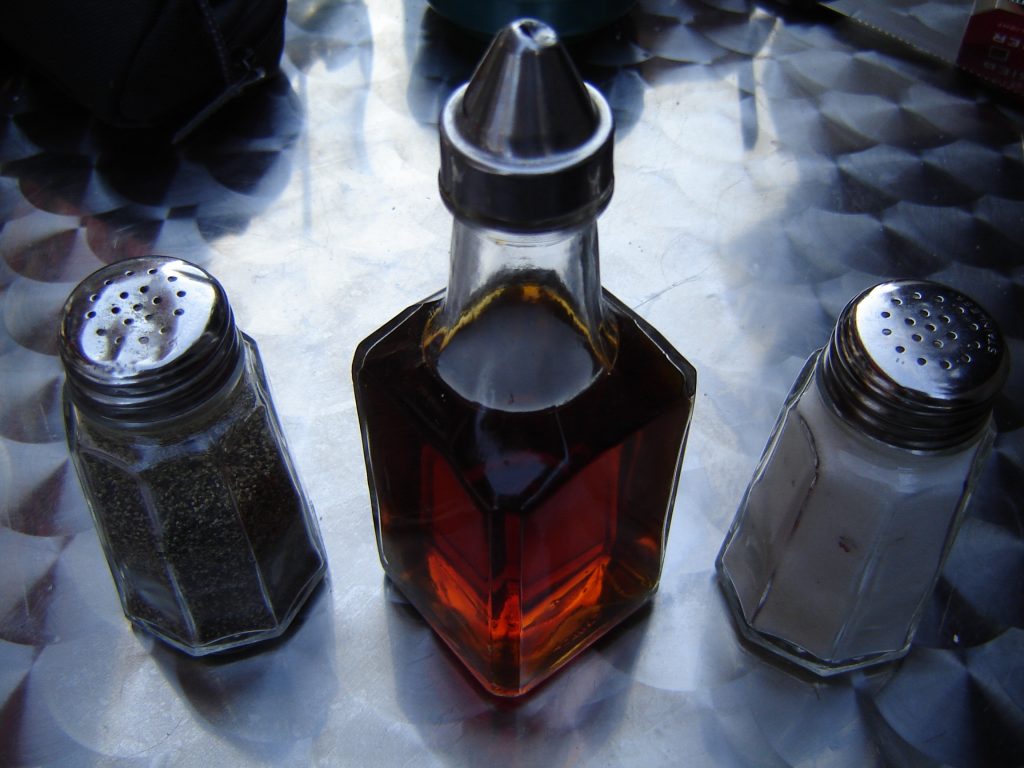 However, several other ways are now used to obtain brown vinegar other than through malting, including extraction from beetroot. These products are prepared for commercial purposes and do not completely substitute brown vinegar in flavor and nutrition. In terms of flavor, this vinegar only shares some similarities with malt.

If you are still wondering about the harms of ‘malting’, stop! It is a basic fermentation process that turns sugar into acetic acid. But maltose is produced in between, which gives the process its name, ‘malting’.

Since every other vinegar contains acetic acid, what makes brown vinegar so different? Well, even though brown vinegar is obtained through the same long fermentation process, it uses barley extracts, which also makes it rich in gluten and other nutrients.

It may sound surprising that brown vinegar is available in different variations. Due to the commercial-scale production of malt vinegar, it is sourced from different ingredients and variation is added to suit the needs of everyone. Pure malt extract from the barley has a darker shade of brown, but the color becomes lighter when it is further diluted or processed.  Its acute taste is also increased.

Such vinegar is lighter and has an amber-like color. It has a mild, soft flavor, which makes it perfect to use for salad vinaigrettes and marinades. You can also prepare a number of sauces using this variety of brown vinegar. 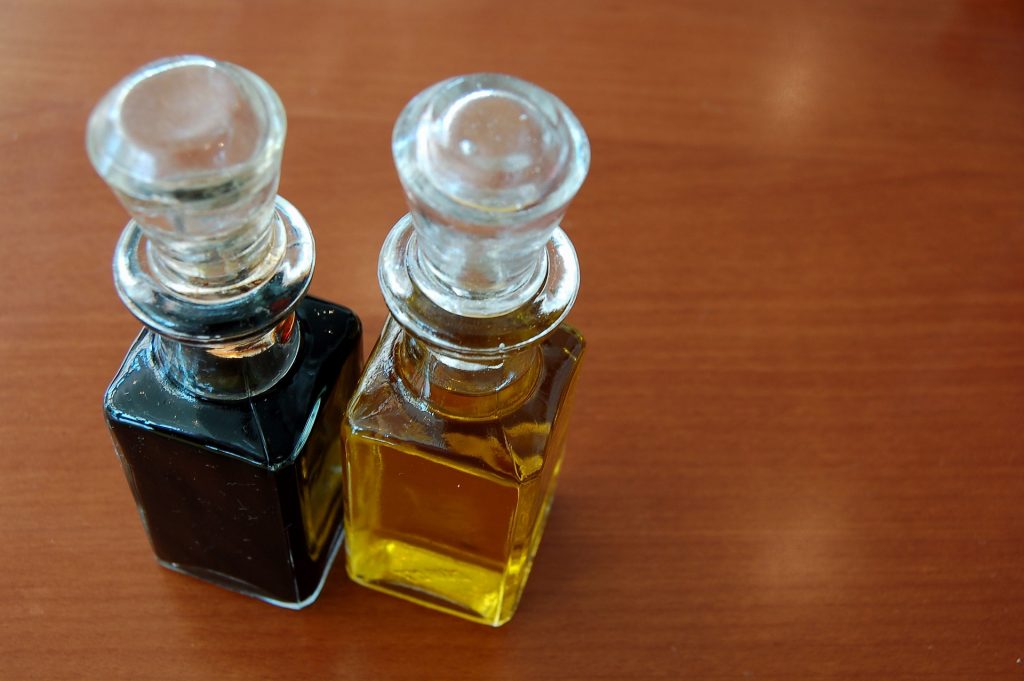 Malt vinegar with darker shades has the sharpest flavor, and it is great for marinating fish among other fish recipes. You can also add brown vinegar to other meat recipes. It is also used in the manufacture of chips.

A full bottle lasts for several months, so it is best to buy according to your needs.

Vinegar has so many uses; it is not only used for culinary purposes but also for a number of cleaning hacks inside the kitchen and out. For the sake of this article, however, we will only be discussing the culinary uses of brown vinegar. From cooking to garnishing, it can be added at any time to add flavors to any recipe.

Whether you are making a mixed vegetable salad or trying something with leafy greens, salads always taste great when seasoned with a juicy dressing. Brown vinegar is a sure-fire way to add flavor to a salad; you can always mix it up with some basic spices to get the best out of it.

A little drizzle of brown vinegar on top always gives an appealing and professional finish with a great flavor. Pour a teaspoon or two over seared meat, cooked soups,  and/or stews and enjoy an inspiring flavor. 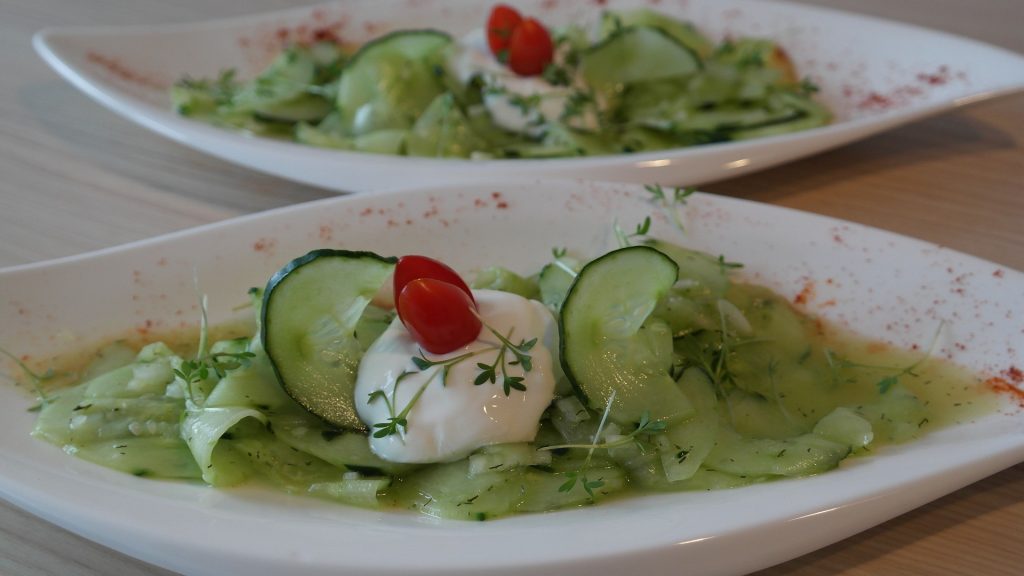 In most parts of the world, chips are served with a little brown vinegar drizzle on top. It is absorbed into the chips and induces a very distinctive flavor. Whether you are frying some potato chips or baking zucchini chips, a light drizzle will always add a kick.

We know that most sauces are incomplete without a little vinegar. Malt vinegar is great for sauces as well as marinade and adds a strong flavor without covering the taste of the other ingredients. It also brings a tasty aroma to any recipe. If you are using dark brown vinegar, just use a small amount as it’s very potent.

Vinegar is essential in storing various vegetables, like pickles. When pickled in brown vinegar, onions taste so juicy and delicious. Likewise, several vegetables can be pickled with a light amount of brown vinegar. Seal the vegetables in a jar filled with amber-brown vinegar, and let it rest for two days to a week.

Using brown vinegar for soups and stews is not essential, but it always helps by adding a soothing flavor. All you need to do is add at least a teaspoon to your freshly-cooked meal. 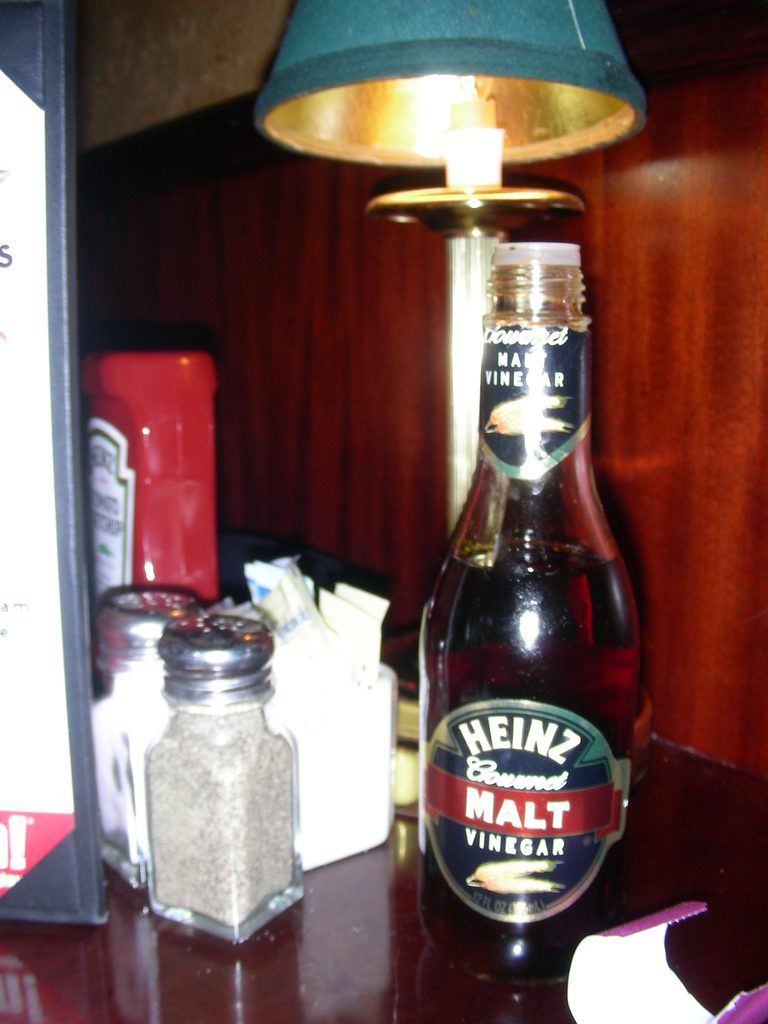 Besides adding the most amazing flavors to your food, there are numerous malt-vinegar health benefits.  It contains important nutrients, and its health attributes backed by modern science. Brown vinegar is prescribed to patients suffering from heart conditions, diabetes, and cholesterol.

According to Diabetes Care, drinking malt vinegar in small amounts before a carb-rich meal can help lower and maintain your sugar levels.  Those who suffer from a greater insulin sensitivity –those with type 2 diabetes–can use malt vinegar to prohibit sugar from getting into the blood-stream.

When you take high glycemic or fat-rich food, gaining a few extra pounds of weight is an unfortunate consequence we have in mind. Brown vinegar can help you control obesity. It adds so much flavor to your food at the cost of only a few extra calories. It aids digestion and does not allow fat to be deposited in the body. Drinking malt vinegar –at least a teaspoon a day, either pure or mixed with water– can have a refreshing effect on your mind and body. It also boosts your metabolism and acts as a natural detoxifier.

Good for Your Heart

The Journal of Food Science published an article in 2014 that states that, in a certain amount, acetic acid is helpful in removing bad cholesterol from the body. Malt vinegar is effective in this regard; it works actively against bad cholesterol and does not allow them to deposit in your blood vessels or heart valves.  If you can not drink it directly, try adding it to a salad or drizzle some over meat before eating. 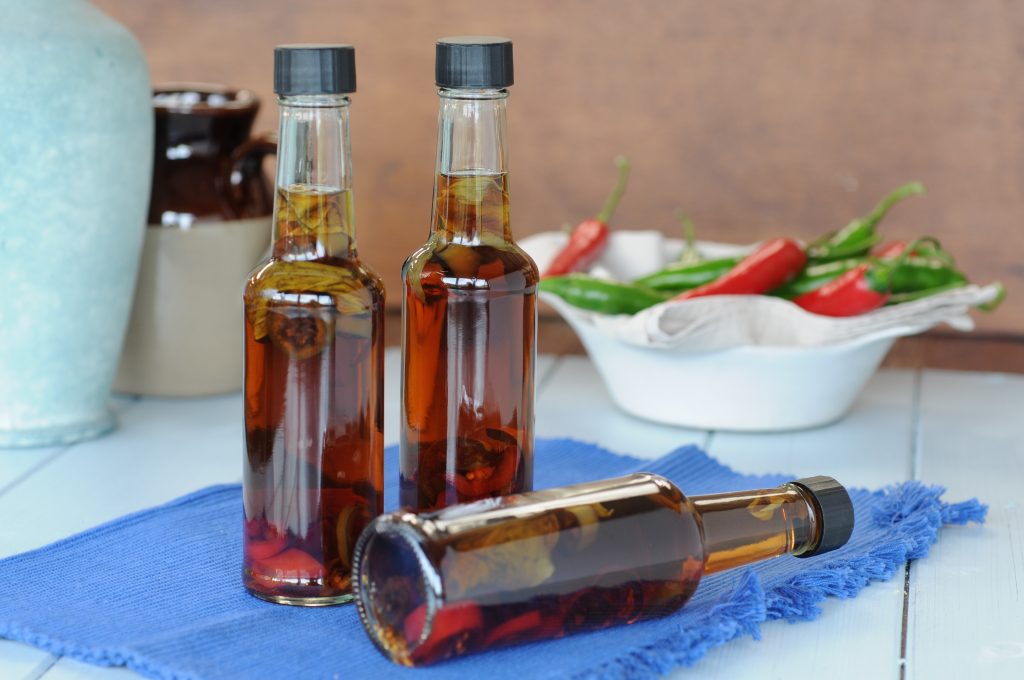 Whether it be fat-rich delectables or protein-loaded meat, brown vinegar helps in the digestion of food. It allows the easy breakdown of complex macronutrients and accelerates the process of assimilation.

Malt vinegar is a strong prophylactic against toxins and other harmful substances, which makes it a great detoxifier. If you have a certain amount of brown vinegar in your diet, it will keep you fresh and healthy round the clock, and your skin will be more beautiful. 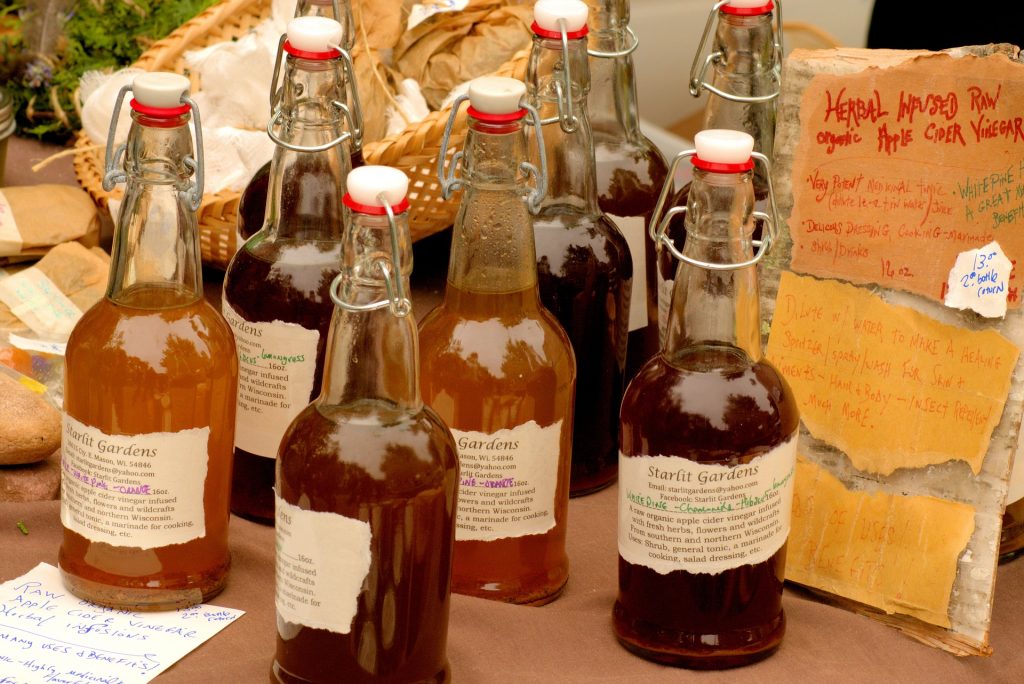 When you substitute any food substance for another, consider the basic characteristic of it: flavor, aroma, appearance, etc. Look for the closest match, and go for it. The same is true for brown vinegar, though, because it is unique, it cannot be entirely replaced with another substance.

However, some options can be considered if you cannot get your hands on brown vinegar. Red wine vinegar is a healthy substitute. It has a somewhat similar taste about as mild as brown vinegar.

You have any sort of sensitivity or allergy that prohibits you from using brown vinegar or anything extracted from barley, then avoid using it and try a gluten-free substitute. Apple cider vinegar is the best choice for people who are gluten sensitive.

It is rich, nutritious, and healthy.

Be careful substituting brown vinegar with other substances; many people simply add the same amount of whatever alternative substance in any given recipe. Since the acute taste of each vinegar varies significantly, you should only add the amount appropriate to a given variety. Otherwise, you will ruin the entire flavor of your cooking. It is therefore suggested to add the substitute according to the taste. Understand what you yourself like, and then add your complement, whether its apple cider vinegar or red wine vinegar.

Brown vinegar is so full of health benefits. Its flavor and nutritional value are characteristics that make it a must on any grocery list. The wide variety of malt vinegar makes it a perfect culinary item to use for entrees and side dishes. If you are not yet familiar with the taste of malt vinegar, and try amber and then work your way to darker brown.

Start adding small amounts to salads, then go for other dishes. It is recommended that a small amount of brown vinegar should be had daily. However, if you are gluten sensitive, always consult your nutritionist or other experts before consuming it. 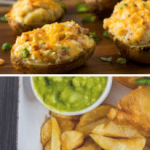 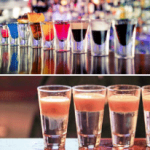