Drinks served in copper mugs are popular in many areas, especially the Moscow Mule. People love copper mug drinks because copper is the perfect cup for keeping drinks cold for a long while and because the interaction between the copper and the slightly acidic ingredients in the drink changes the flavor of the drink.

Copper distributes the chill of the drink better than ceramic or glass, and the handle on the mug prevents warming from the imbiber’s hand.

Recently, there has been some concern that drinking from copper mugs could raise some health issues. In sufficient quantities copper is toxic to humans. With most beverages, drinking from a copper mug is not a problem – as long as the pH is above a 6.

To place some perspective on this, lemons have a pH of 2.2, Limes 1.8 – 2.2, Vinegar 2.4, apple juice around 3.3 and orange juice, depending on the juice brand and origin, 3.3 to 4.2. As you can see, these numbers are all lower than 6, meaning they are sufficiently acidic to interact with the copper. 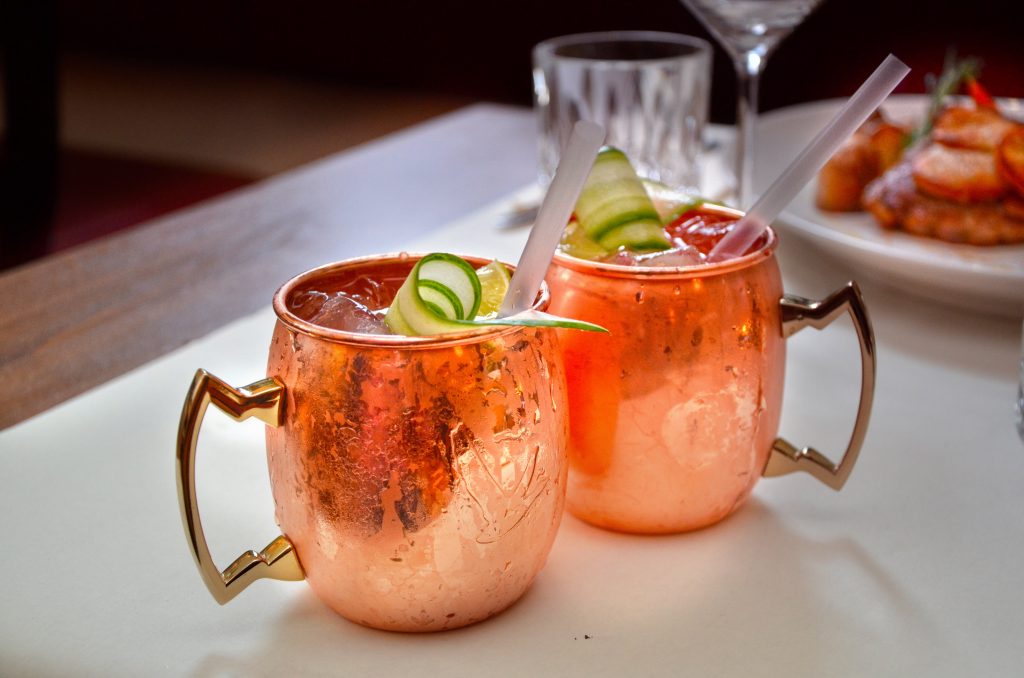 The U.S. Food and Drug Administration has stated that copper should not come in contact with food or drink that has a pH lower than 6. July 28, 2022, Iowa issued a directive that food and drink served in Iowa was to have limited contact with copper and copper alloys. Some people might be of the opinion that this is a bit alarmist, but Iowa is merely reiterating the FDA’s official stance. One suspects that they are running on the “better safe than sorry” approach.

Drinks in Copper Mugs – Are They Healthy? 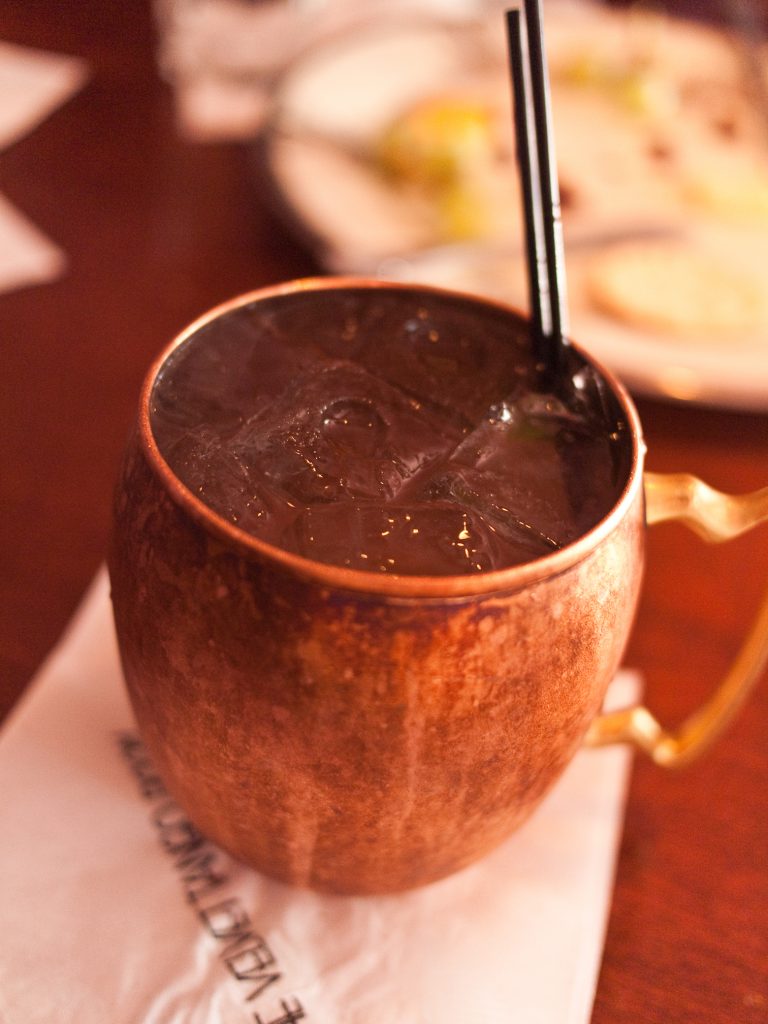 Are drinks in copper mugs a threat to health? While it is known that sufficient amounts of copper in human diet can be toxic, what is unknown is how much copper leaches into the liquid when a drink such as the Moscow Mule is served in its traditional copper container.

In 1991, the Environmental Protection Agency placed the maximum contaminant level for copper at 1.3 mg per liter. When asked if he could put a number on how many drinks one would need to consume to become ill, Professor Marc Solioz said that the human sense of taste should give an early warning sign. He said that long before the person imbibing the drinks would be too affected by the copper in the mug, the drinks would take on a metallic flavor – a clear signal that there was too much copper present.

Professor Solioz went on the add that while for most people, drinking something from a copper mug would present low to nonexistent risk as long as the drink didn’t sit in the copper container for more than about fifteen minutes, about 1 in 30,000 people have a condition that makes copper far more toxic for them. Most people pass the copper out of their bodies, but people with Wilson Disease seem to have difficulty passing the copper, therefore it accumulates in their bodies. For them, even a small amount of copper could be a problem.

Why Use Copper Mugs? 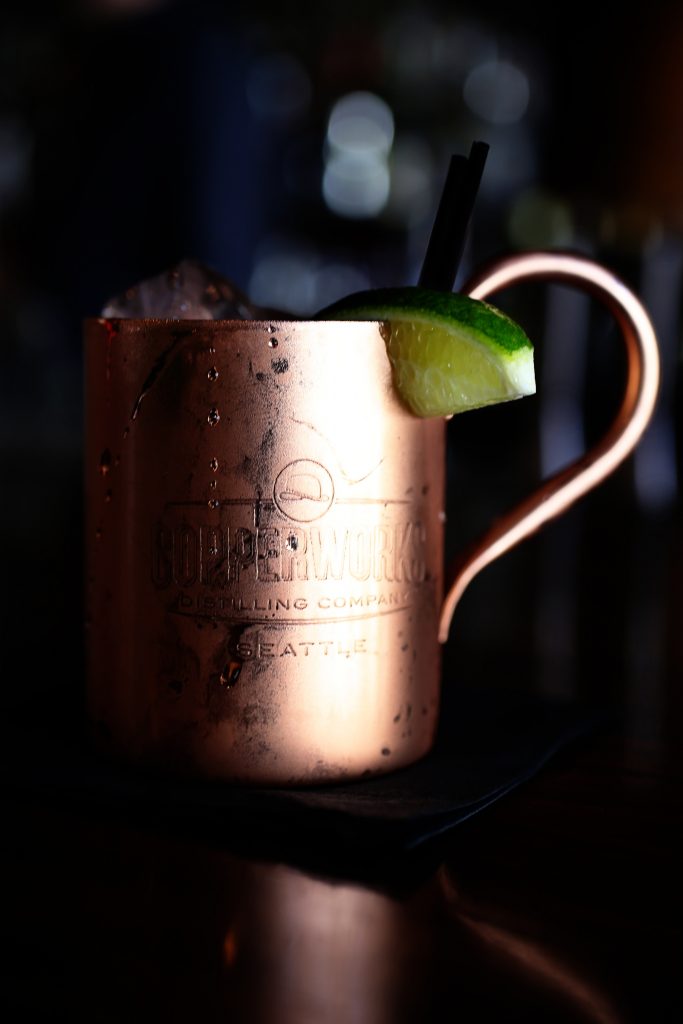 There are many reasons to use copper mugs. They are attractive, they enhance the chill on a drink, and they create a unique flavor. Some drinks simply are not going to taste the same when drunk from a different kind of container. The choice is yours: to drink or not to drink, just as it is for people who enjoy the flavor of absinthe or the tang of poke greens. There are some foods that simply should come with a warning label and sometimes does, such as certain types of cured pork.

The National Institute of Health notes that cases of copper poisoning are rare, but that health complications could occur from long-term exposure to copper. Copper is what knowledgeable chefs call a “reactive metal.” Reactive metals, those that will interact with food, include aluminum, copper, iron, and steel, except for stainless steel. Reactive metals do a good job of distributing heat or cold, but they also leach little bits of mineral into food.

Line the inside of the problematic mug or pan with another material, such as stainless steel. They might not quite have that authentic taste, but they will still look pretty, still have the temperature distribution attribute, and the lining might save you a trip to the hospital. 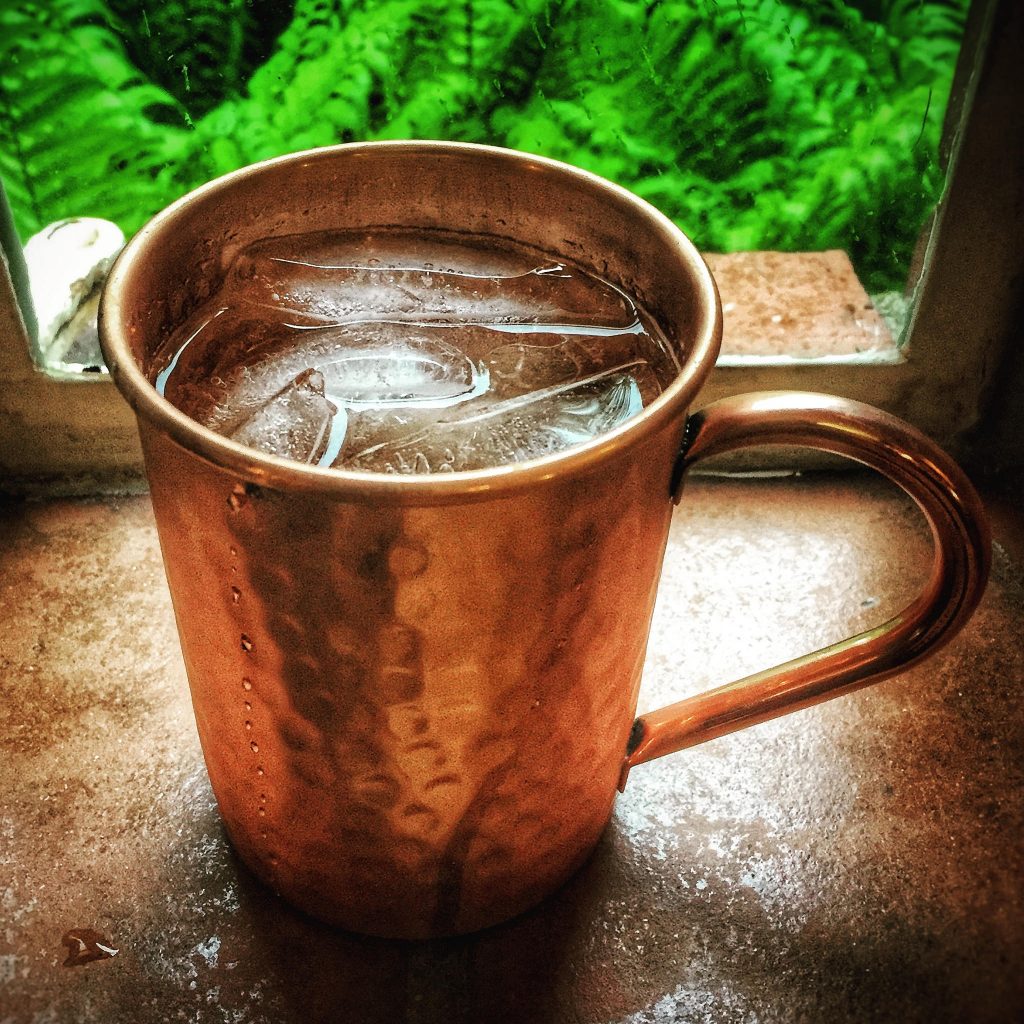 That difference, however, could be a problem.

The drink that makes copper mugs special is the Moscow Mule. It originated in the Cock n Bull, in Hollywood, California. Young Sophie Berezniki was trying to sell beautiful copper mugs she had designed herself. Jack Martin had recently purchased the American rights to Smirnoff vodka, and Jack Morgan had a batch of ginger beer that he had brewed that just didn’t seem to appeal.

But when the vodka and ginger beer were combined in Sophie’s copper mug, something magical seemed to happen – magically delicious, anyway.

Place ice in a lined copper mug and add vodka. Squeeze the lime over the ice, then pour in the ginger beer. Place a lime wedge on the edge of the container and serve. 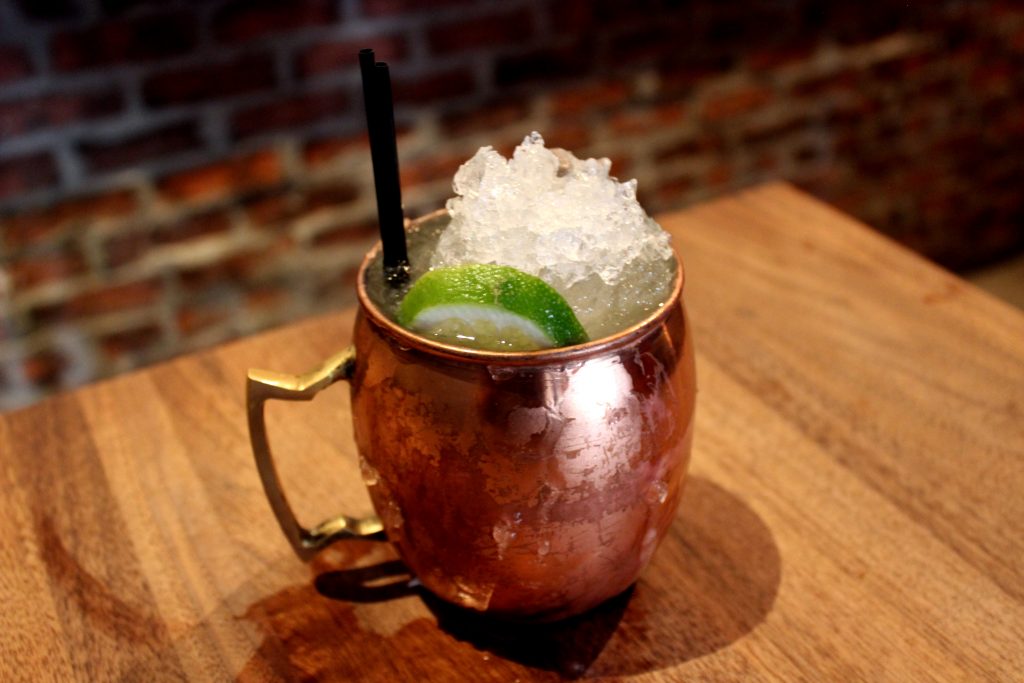 Somewhere along the line, someone must have run out of vodka, or maybe someone just didn’t like vodka. So, the Dark n Stormy was born.

Place ice in a lined copper mug (I know, I know…it just won’t be quite the same as in an unlined copper mug, but after talking about how copper leaches into the liquid…), pour the rum over the ice, then add the lime and the ginger beer. Top with a wedge or slice of lime, and you are set for ghost stories that begin, “On a dark and stormy night…”

Place ice in your lined copper mug, and pour the bourbon over it, follow that with the ginger beer, and drizzle in the ginger syrup. Top with grated nutmeg and enjoy. 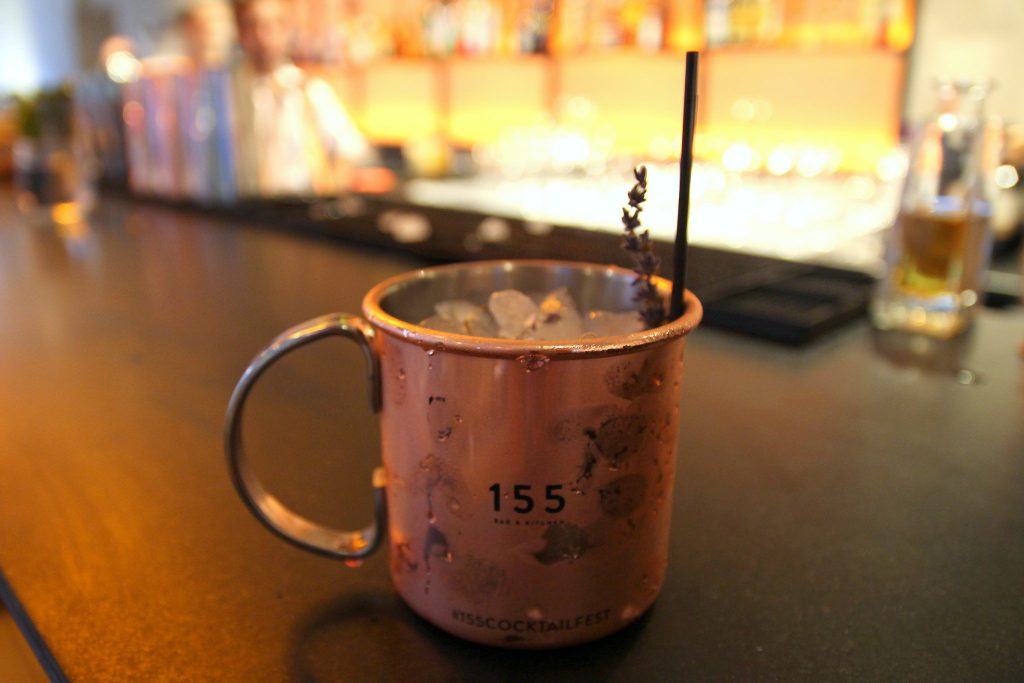 This is a coffee and chocolate mixture that your copper mug will keep chilled to perfection. Unlike the other drinks, this one begins in a shaker.

Combine all the ingredients except the cinnamon stick in a shaker and shake well. Put ice in your lined copper mug, pour the drink mixture over it, and add a cinnamon stick for a little extra flavor. 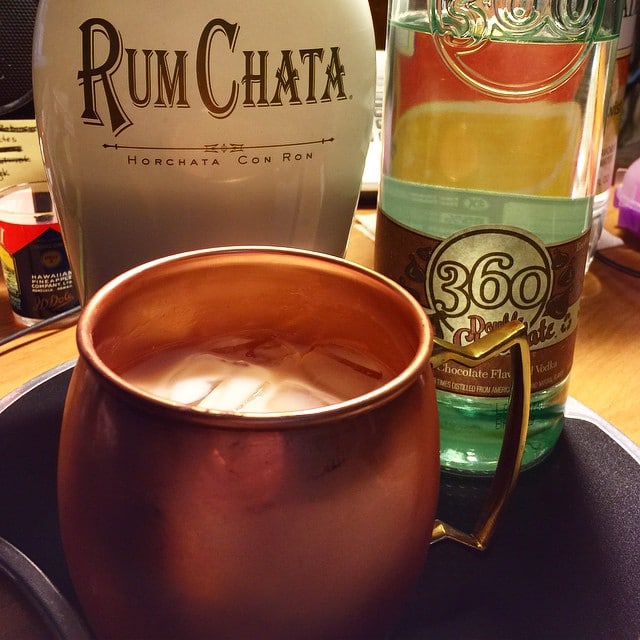 By now you are probably beginning to see a theme. Most of the drinks include 2 ounces of some sort of distilled drink – vodka, whiskey, rum, or similar items. They are mixed with ginger beer and lime or lemon juice, then topped off with a dusting of spice and a garnish to give it a finish.

While the flavor is important, like most mixed drinks, a presentation is also important.

Here is an example of swapping out ingredients to create your mule. The Morning Mule trades out the normal lime juice for fresh squeezed orange juice but keeps the ginger beer and vodka – just to chase the cobwebs out of your brain. But if you don’t like orange juice, you can trade that out for peach or even pineapple.

Where to Get Your Copper Mugs

You can get lined copper mugs almost anywhere, including your local department store. They are listed at Kohl’s, on Amazon, and even in Walmart’s online store.

When purchasing the mugs, look for the ones that are stainless steel coated with copper or copper lined with nickel. Stainless steel and nickel do not interact with foods.

These mugs will be handwash only, not dishwasher safe.

This is to help preserve the lining or clear seal that has been placed on the mugs. Not only should they be hand-washed, but it is also best to use a soft cloth – no scratchers or scrubbing brushes – and a very mild detergent. 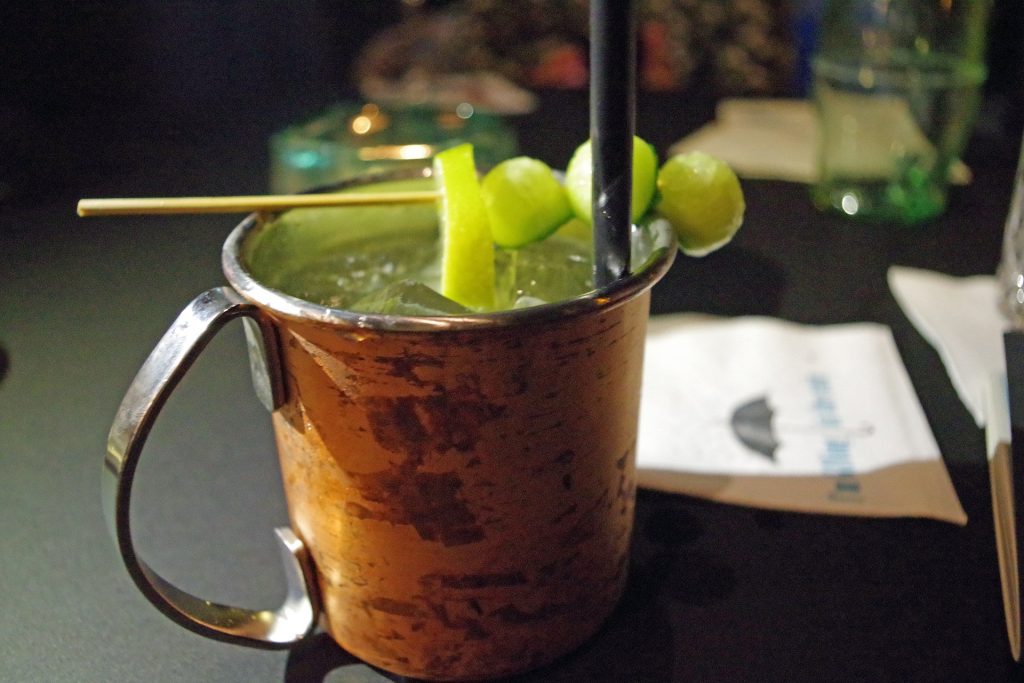 The lined mugs will help keep your drinks cold just as well as a completely copper mug and will protect your health by preventing the risk of copper poisoning. More than that, those that have a clear, protective coating with retaining their bright shine without tarnish.

Copper mugs come in several styles, including smooth sided barrel-shaped mugs, dimpled mugs, and hammered mugs. They can be purchased singly, or as sets. The sets range from two mugs to four and some are accompanied by shot glasses that are shaped like tiny mugs.

You can also purchase pure copper mugs that are replicas of the original mug. These are straight sided with a rolled top and welded bronze handle. The copper is covered with a food grade protective finish that keeps it from tarnishing. These replicas are handwash only, and definitely not for the microwave. If the protective finish becomes scratched, retire the cup from service as a drinking vessel and use it for decoration only.

We have seen that copper mug drinks are not exactly dangerous to health, as long as it’s pH level is not lower than 6. Good copper mugs have a lot of benefits that allow you to enjoy your drinks as long as you have the right mixes. You can try out the cocktails above and leave a comment below on which is your favorite. 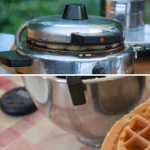