Deriving its name from the Four Horsemen of the Apocalypse, the 4 horsemen shot may well be the harbinger of your own massive hangover; that is if you don’t quite have the tolerance for hard drinks.

The reason behind the name is because four hard liquors are used to make this hardcore drink. Although variations of this drink do exist, Johnnie Walker, Jim Beam, Jack Daniel’s, and Jameson usually team up together to give birth to this hard drink.

Whoever came up with this drink — maybe it was a passionate, albeit bored, bartender who had a lot of time in his hands or a frat boy who wanted to get his mates completely hammered — made sure that the four horsemen shot was out to get you.

But make sure you’ve built up immunity to hard drinks or upped your tolerance, because the last thing that you want to happen is the Four Horsemen giving you a glimpse of what the apocalypse feels like.

The History of The Four Horsemen Shot

As mentioned earlier, no one’s quite sure who came up with this hard drink. Bartenders have a habit of creating drinks on the job when the night is slow, and they have all the time, and alcohol, in the world to create.

Remember that game on your computer or smartphone where there’s a bartender and you have a wide variety of drinks to choose from and you let him mix whatever drink of your choosing and let him have a taste of it and he’ll either love it or throw up in flames? Maybe that’s how this drink was made. 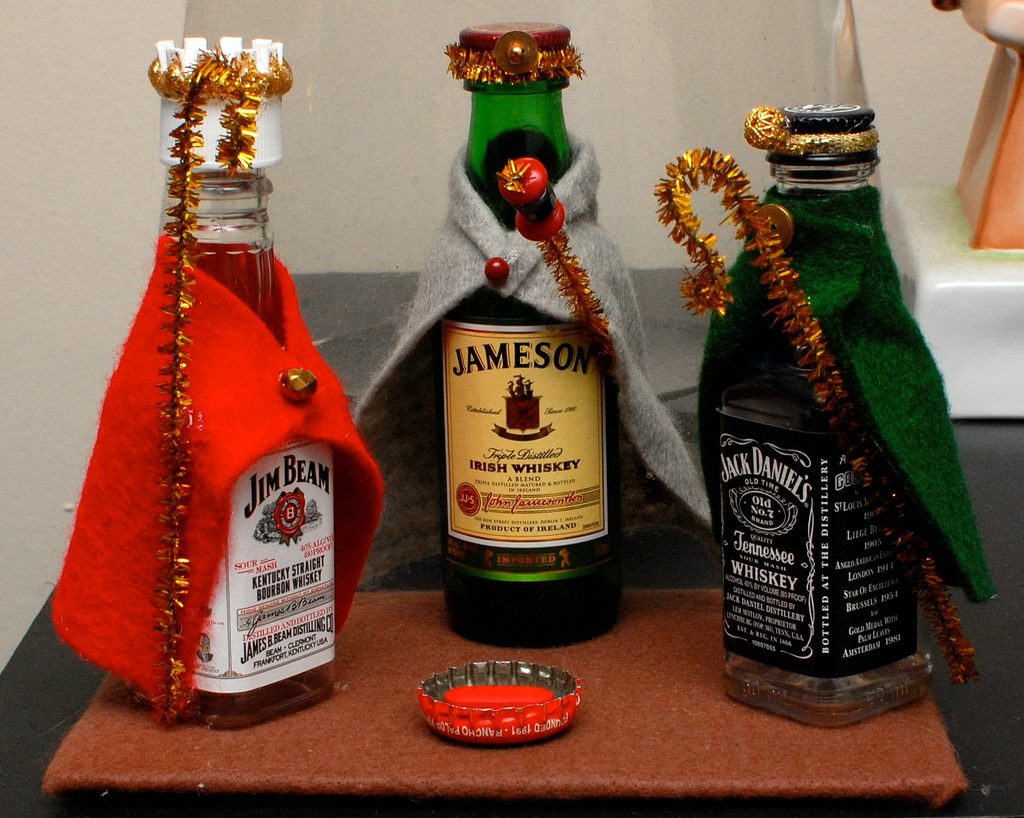 We may not know who created this hard drink, but everyone has an idea why it was called the 4 horsemen shot. This drink has a lot of variations, but the usual three culprits that are never absent whenever it’s made are Johnnie Walker, Jack Daniels, and Jim Beam. Most of the time the fourth one also starts with a letter J. These are considered as the ingredients for the original 4 horsemen shot.

Since the four hard drinks used start with the same letter, it brings a unified approach to the drink, hence why they started calling it the Four Horsemen shot.

Keep in mind that the name came from the Four Horsemen of the Apocalypse, which meant doom for everyone. In a similar fashion, the four hard liquors will bring you to your knees when the kick settles in. The apocalypse will bring the end of time; the shot brings an end to your night.

That is, if you took more than one shot.

If you’re not familiar with the Four Horsemen of the Apocalypse, then here’s a quick recap of what it means. Although it’s quite a popular name for threatening or monolithic groups of four, the original Four Horsemen were believed to be four beings riding horses believed to be a collective harbinger of death. Each of them heralds death, famine, war, and conquest, respectively.

Basically the name jokingly brings to mind death and destruction; considering that the shot was named after that, you might want to reconsider drinking it if you have a low alcohol tolerance level. 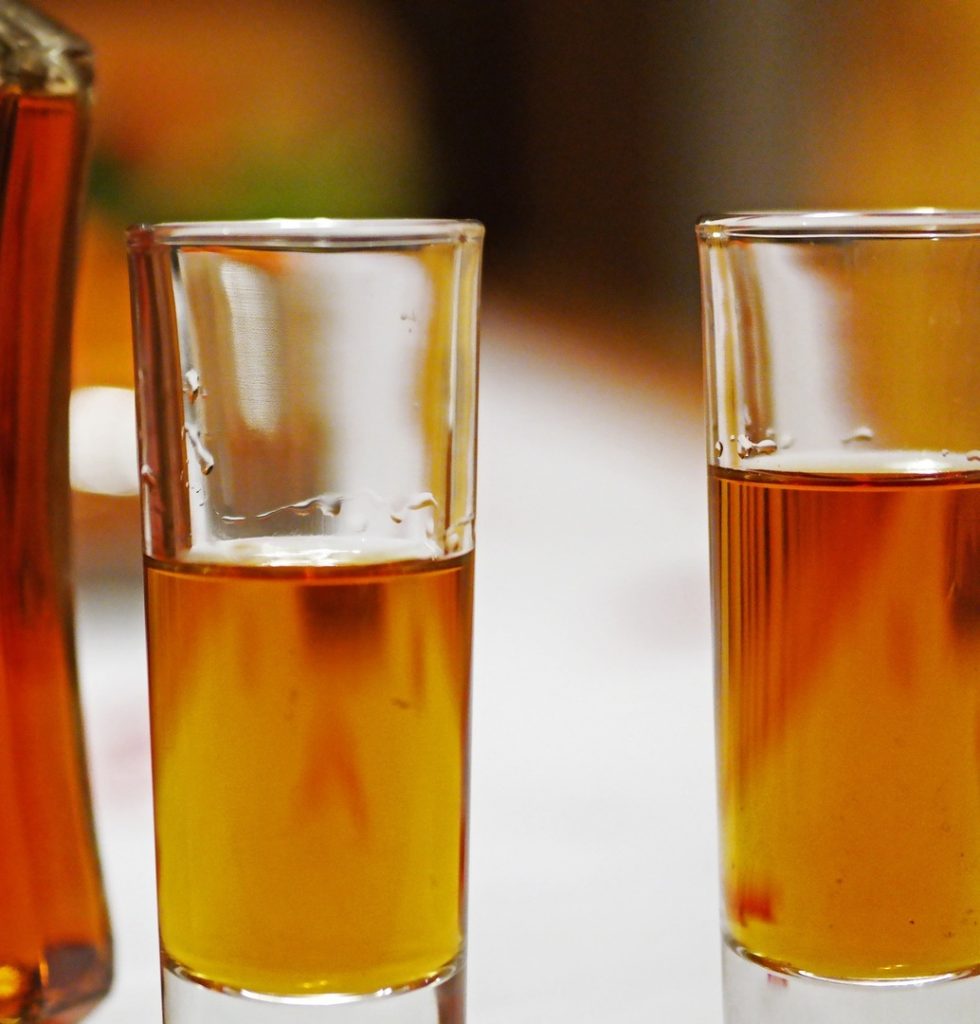 What is a Four Horseman Shot?

The four horsemen shot is definitely meant for those who enjoy their whiskey. If you’ve been indecisive about what whiskey you want for the night, then maybe combining four of them in a shot glass might be a suitable option for you. You’re going to have the best whiskey you’ve ever had in your life, considering that you just combined four of the best in one shot glass.

This drink is served neat, which means it doesn’t require dilution or ice when you serve it. With that said, the reason why this drink hits you harder than most — other than the fact that it’s composed of four of the hard liquors you can get your hands on — is the fact that it is undiluted, maximizing the strength of the drink.

It’s also a pretty easy shot to make since all you have to do is acquire the four whiskeys that you need to use.

These are the four horsemen shot ingredients:

How to Prepare the Four Horsemen Shot?

Considering that it’s such an easy drink to prepare, you can have it during any party as long as you have these four whiskeys in your cabinet, waiting to be mixed together, and waiting for anyone who’s courageous enough to down them altogether. But do note that although four hard drinks are mixed together, it doesn’t necessarily mean that you’re going to pass out right after drinking it, since not everyone has the same tolerance for alcohol.

Should I Use a Shaker to Mix Them or Not?

Usually, a shaker isn’t a necessary tool to use when making the four horsemen shot. You can simply pour the four liquors together in a shot glass and down them straight away. But there are some who prefer to thoroughly mix the four together by using a shaker. It’s simply up to you whether you want to use one or not; it doesn’t really make much of a difference considering that the strength level will still be the same either way.

The original four horsemen shot ingredients is one of many Four Horsemen-style shots. Variations of this drink are done by adding another liquor to the four hard ones that it already consists of, thereby giving it another twist, or making it harder than it already is. There are dozens of variations with this drink, and you might want to check out the others and pick the one that you think you will enjoy. 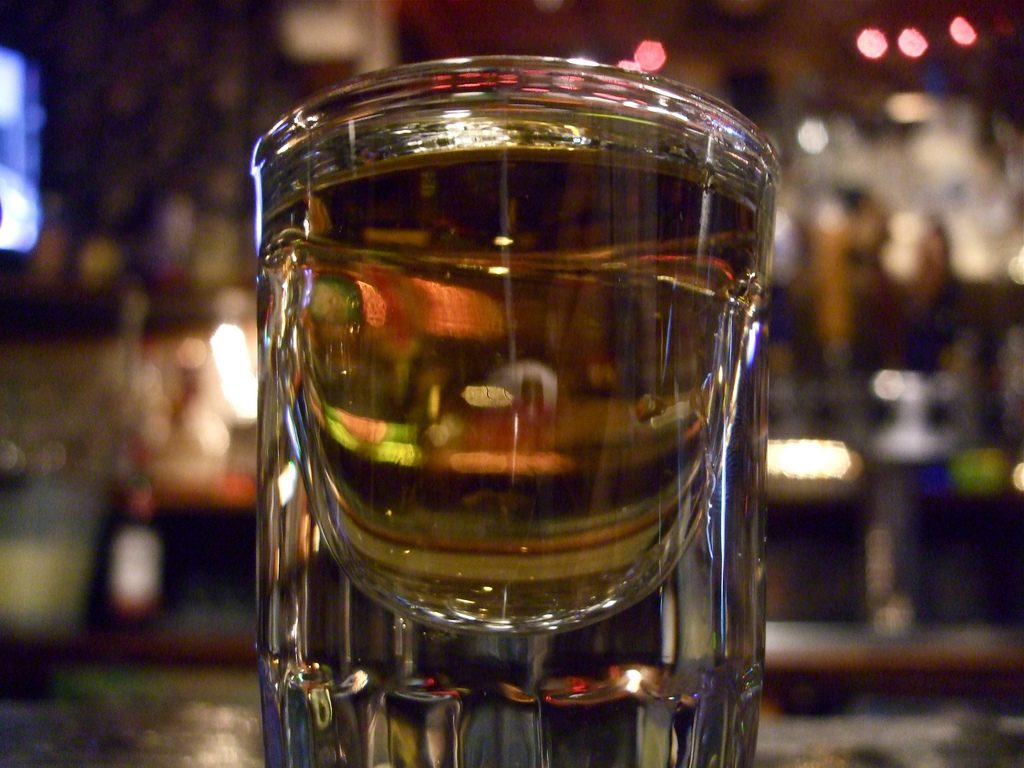 Four Horsemen of the Apocalypse

Technically, the name Four Horsemen shot was taken from the Four Horsemen of the Apocalypse, but there just so happens to be a drink that honors the name furthermore by even adding the word “apocalypse” at the end of it.

This one still uses the basic three, fondly called as the Three Wise Men, but differs in the fourth one and a Jagermeister herbal liquor is also added, which means that the Jagermeister is considered the apocalypse.

You will have to use a shaker with this one. Fill the shaker half-full with ice and add the ingredients together. Shake it for a while and then strain into a high ball glass. Enjoy.

Note: Some might use a Bacardi 151 instead of Jagermeister.

Four Horsemen in a Boat

You’ll still be using the original ingredients with this one, although bunking out John Jameson with Jose Cuervo and letting Grand Marnier join in on the fun. 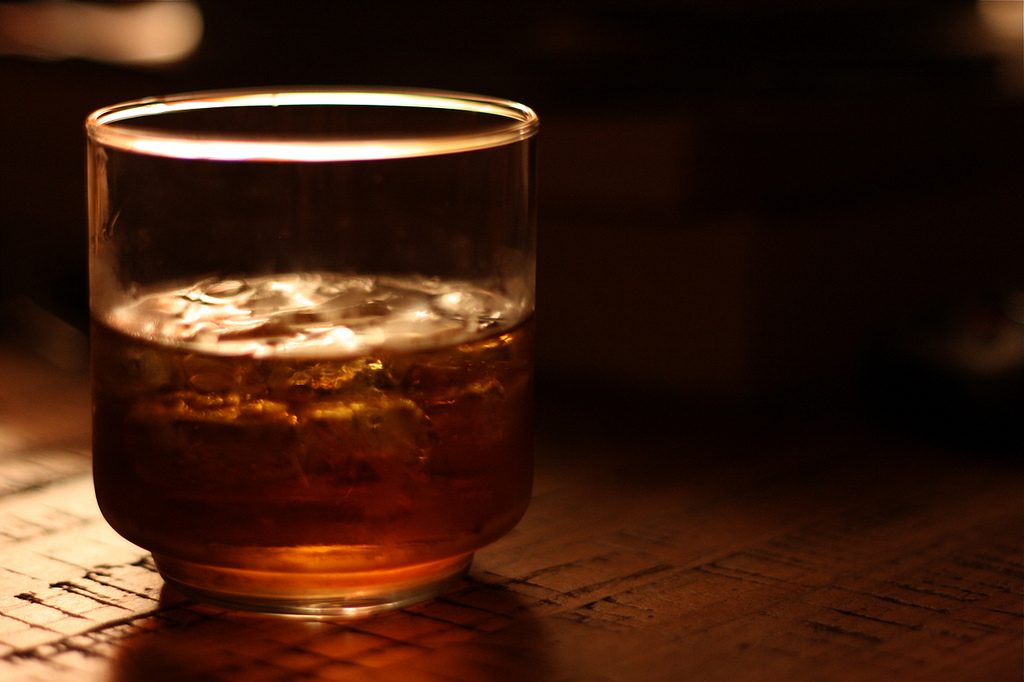 Mix all the ingredients together in an old-fashioned glass and serve it without adding ice or using a shaker to mix them together, in the same way that you serve the original four horsemen shot.

With this one, you will use the same four whiskeys and add Captain Morgan.

The preparation of this drink is the same as when you prepare the original Four Horsemen shot or the Four Horsemen in a boat shot. You serve it straight right after you combine all the ingredients together in a glass.

These three aren’t the only variations for the four horsemen. There are still a lot more variations that you can choose from:

In other recipes, John Jameson is the fourth whiskey being used and then there are some that use Jose Cuervo. John Jameson is considered as part of the original recipe whereas Jose Cuervo can be added to the four hard liquors to make the Four Horsemen on a Mexican trail.

The difference between the two doesn’t really matter, considering that the point of the Four Horsemen is to use drinks that have high alcoholic content and combine them together to make an even stronger shot for hard drinkers to take.

You may notice that Johnnie Walker, Jack Daniels, and Jim Beam are always present in every recipe of the four horsemen, even the alternative ones. Unlike John Jameson, the three are constantly present. With that said, those three are also known as the Three Wise Men.

This drink is technically considered a cocktail, though it doesn’t use any ingredients that would define it as such. Although, like the Four Horsemen Shot, there are also a number of variations for this drink in which one of the whiskeys is changed into tequila or rum. Still, it doesn’t change the fact that this drink should also be considered as a hard-mixed drink. 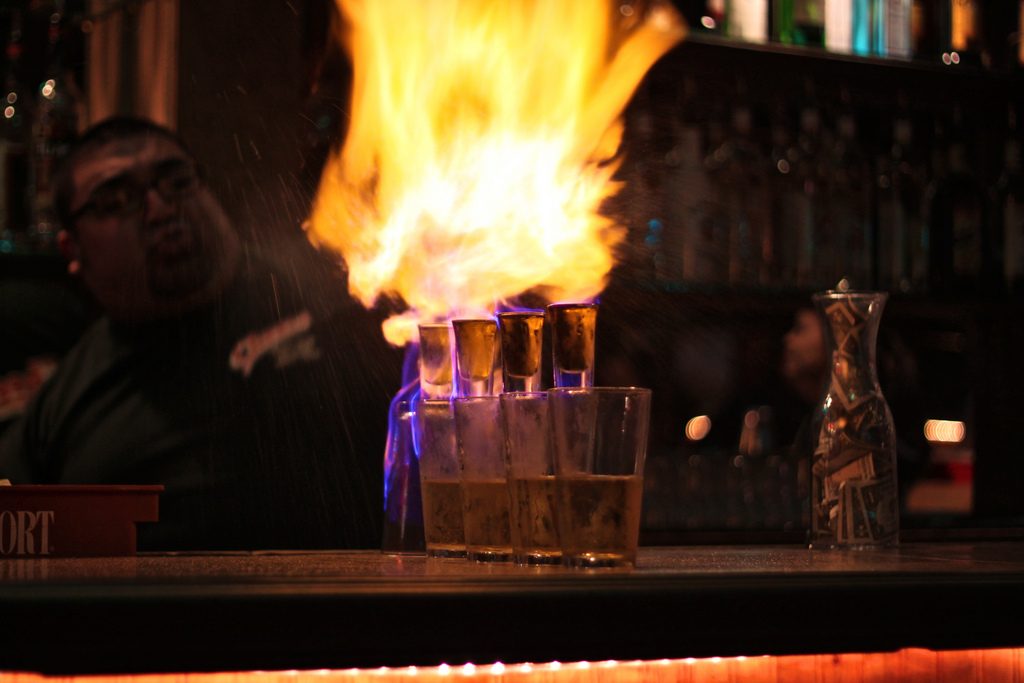 Three Horsemen and A Drummer

You will still use Johnnie, Jack and Jim with this drink, but you’re also going to add Drambuie.

Flaming drinks have become a thing recently. But for the Four Horsemen, you don’t pour them altogether in one shot glass. Rather, pour each whiskey in a respective shot glass and top it off with flammable liquor like Bacardi 151 or Everclear. Line the four glasses and then light one side up until the flame will reach all four glasses.

Blow the flame and drink it.

The flaming Four Horsemen shot is usually done in groups.

Is the Four Horsemen the Manliest Drink?

It’s tough to decide which drink should be considered the manliest among all. Whiskey is hard alcohol, given that it contains a high level of alcoholic content. Considering that the Four Horsemen is made up of four whiskeys, one might consider that it is the manliest drink out there.

But it’s not. It’s just one of many. If you’re looking for a classic manly drink, then this is one that you can ask the bartender to whip you up if it happens to be a night where you want to prove something to your peers. It’s tasteful, you can give it that, but it’s not everyone’s cup of tea.

Other types of Hard Shots

The Four Horsemen is one out of ten manliest drinks; one might wonder what the rest are. Here’s a compiled list of manly drink that you might want to ask your local bartender to make you:

Compared to these manly drinks, the Four Horsemen shot seems a tad bit safer than the rest, but if you’re the kind of guy who’s willing to take the risk, then by all means, choose your drink and bottom’s up.

The Four Horsemen shot is an easy drink to prepare as long as you have the four whiskeys in your liquor cabinet. The fourth horseman, John Jameson, can be substituted with Jose Cuervo or another hard whiskey of your choosing for as long as the Three Wise Men are consistent in the recipe.

This shot might be a fun idea to do, but keep in mind that it’s meant as a one-shot drink only. If you want to drink more than one shot, considering how strong it is, that’s your choice. Do note that not everyone has the same threshold for alcohol, but it’s also better if you keep in mind that drinking should be done in moderation. If the Four Horsemen shot is meant as a one-shot thing, it’s better for it to stay that way.