A green apple smoothie is often recommended as a detoxifying green smoothie. Just as a cautionary aside, don’t – seriously, do not – look up “sour apple smoothie” in the urban dictionary. Let’s just say the definition is no less disgusting than the green pea soup used in the Exorcist.

Fortunately, the sour apple smoothie under discussion here involves healthy ingredients such as kale, spinach, and fresh apples. With some attention to some small additives, it can even be tasty, as well as being the perfect solution for a tummy that is irritated by too many holiday goodies.

What are Green Apples?

Green apples that are ready to eat are not unripe apples. Apples that are not ripe, as many a saddened farm child knows, is a good way to gain a severe stomach ache. This is because ripening fruit emits ethylene gas, a substance that encourages the plant to ripen. When you place an apple or a tomato in a brown, paper bag, you are trapping the gas which encourages the plant to ripen.

While ethylene gas is beneficial for getting a fruit to ripen, it is not desirable inside the stomach where it will, as do gas bubbles of any sort, cause gastric distress. While on the topic of gastric distress, not everyone can eat apples. Some people are frankly allergic to them, while others might experience mild distress.

In some cases, substituting a different kind of apple or one that is a little riper can help. In other cases, where apples cannot be eaten at all, substitute some other kind of fruit, such as an avocado, for the apple. 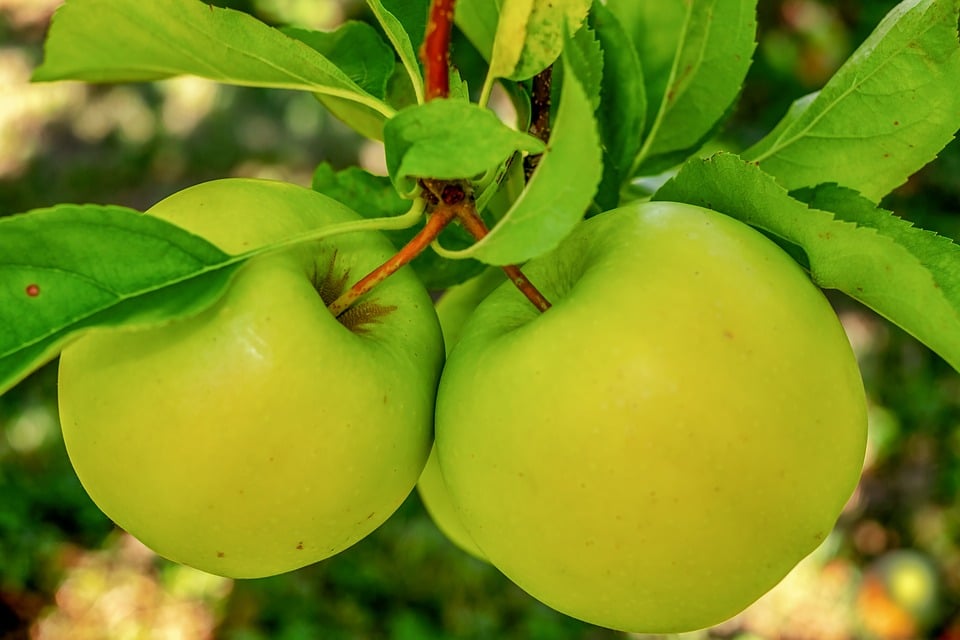 Ripe green apples come in several varieties. These include the very well-known Granny Smith, followed up by Pippins, Shizuka and Crispin apples. Yellow delicious apples can substitute for the more piquant species, especially if selected just when they are on the cusp of true ripening.

At that stage, instead of the mealy, sweet apple that cooks down into applesauce, yellow delicious apples are crisp and juicy with a bright flavor, but still not as sharply acid as some of the other green apple varieties.

You don’t have to create a mystical chemical brew to have a good, green apple shake that can boost your morning energy and help you get in gear  the morning after that night of incredible fun (or hard work, which can be fun).

The ingredients in a green apple shake can vary. In fact, possibly should vary because individual tastes are different, but it all starts with a green apple.

A quick and easy green apple shake should start with your apple or apple substitute. Cube up about 1 cup of apple, with or without the peel. Strictly speaking, it doesn’t absolutely have to be a green apple. A tart red apple will also do.

The next ingredient is a strong leafy green such as spinach or kale. Spinach tends to be a little milder than kale. You can also use a bit of wheatgrass, if that strikes your fancy. Add some agave for sweetness, and a teaspoon of chia seeds for the omega 3s and a bit of a protein boost and fill up the spaces in your mix with almond milk. You can also add a tablespoon of almond butter for more protein. If you like it, cinnamon can be a nice flavor and, it is said, a bit of a mental boost.

There you have it. 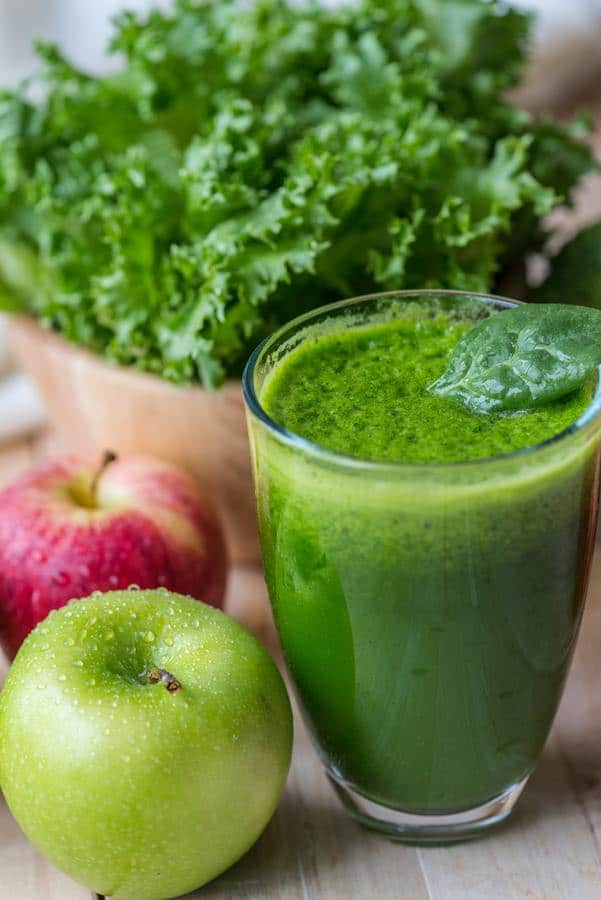 A morning pick-me-up that doesn’t include caffeine, protein powders or any other additives.

Don’t be afraid to Experiment

Tinker with the general ingredients until you have a balance of flavors that you enjoy. Don’t throw out your failures; instead, use them as the liquid in a health-conscious cake or batch of cookies.

Sour apple or green apple smoothies are just an advanced sort of green apple shake. They might be a little more robust or complex than a shake. You can explore Sour Apple Smoothie Nutrition with ease because apples are almost always available just about anywhere. Apples work well in smoothies because they have a strong flavor that can disguise other ingredients that can overwhelm more delicately flavored fruit.

Apples harvest begins in late June in most temperate zones and lasts until late autumn. Apples are, as the old timers say, good keepers. Properly stored, and with a close eye kept on their condition, autumn apples can remain a viable fruit into late February or even early March.

Apples can be canned or frozen. While this is likely to diminish the Vitamin C in the fruit, there are other nutrients, such as Vitamin A, are still available. Apples are high in fiber. Green apples are slightly lower in carbohydrates and sugar than red apples and contain a little more fiber. A lot of the nutrients in an apple are next to the skin, so if you can digest apple skins, avoid peeling.

Other Ingredients that You Can Add to Apples in Green Apple Smoothies or Shakes:

While not quite the powerhouse vegetable portrayed in the Popeye comics and movie, spinach is an excellent green, leafy vegetable. Raw, it contains quite a lot of vitamin C, and it is often available throughout the winter because it can readily be grown in a greenhouse. Spinach also contains vitamin A, folate, and several other vitamins and minerals that are important for good health.

Kale is even more nutrient dense than spinach, but it can be a little difficult to digest. It is, however, and an excellent source of vitamin C and A, has super amounts of fiber, and  have a nice assortment of minerals besides.

Wheatgrass is the immature stalks of Triticum aestivum, which is the wheat commonly grown to produce the grain from which bread, animal feed, and many other things are made. It contains Vitamin C and Vitamin E, the latter being more difficult to obtain. It is high in antioxidants and might be beneficial toward lowering bad cholesterol – the kind that clogs up your arteries.

These dried fruits taste sweet, so you don’t need very much of one in your smoothie. Figs are not as sweet as dates, and they contain vitamin A, B1 and B2. Dates are super sweet but are also teaming with vitamins and minerals. They are a healthy alternative to sugar and artificial sweeteners and even contribute some fiber. Just remember, they are the super candy of the fruit world, so you only need one. 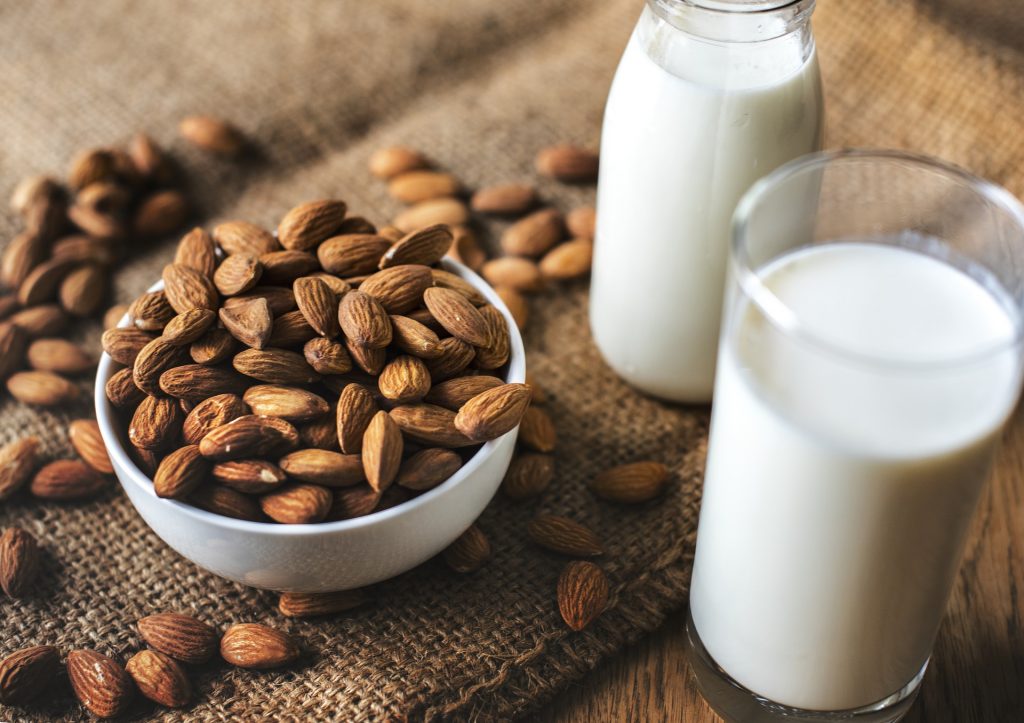 Almond milk contains a gram and a half of protein per serving, along with calcium and other minerals. Almond butter is a high-calorie, nutrition dense food, containing 98 calories per tablespoon and 2.4 grams of protein without any sugar at all. Peanut butter has similar nutrients if you can get the kind that contains only peanuts, no added sugar or fat. However, it comes in as a poor second to almond butter.

Nut butters, however, are not a good choice for everyone. Almonds are tree nuts, peanuts are a legume, and both are known to trigger allergic reactions in some people.

What is apple anything without a dash of cinnamon? In addition, cinnamon is an excellent antioxidant, boosts sensitivity to insulin, and lowers blood sugar levels. Cinnamon is also a powerful anti-inflammatory. Like many such spices, a little each day in sensible levels is enough.

Yogurt is one of those probiotic cultures that have gotten a lot of popular press recently. More than that, some people who have trouble drinking whole milk can digest yogurt. Furthermore, a dollop of yogurt in your smoothie can act as a binder that makes all the rest of it work together.

Chia seeds are a super source of omega three fatty acids and an added protein source. If you can’t handle yogurt, let your smoothie sit for a few minutes with an added tablespoon of chia seeds, and you will quickly have a smoothie gel that can be eaten with a spoon.

With these ingredients in mind, let’s explore making smoothies.

Place all of the ingredients in a quart blender or food processor and pulse until the mix is smooth. Alternative or added ingredients include, but are not limited to: almond butter, sesame seeds, dried dates, or agave nectar.

Try different combinations until you have developed a smoothie that you enjoy. While a green goo that makes you gag might be a fun trope for urban fantasy fiction, it isn’t a pleasant way to begin your morning. A drink that tastes good can be just as effective and will begin your morning on a much brighter note.

Granny Smith is the queen of sour apple species. The tart, green-skinned apples are crisp, white-fleshed and juicy even though the outer peal looks green. It has long been the apple of choice for apple pies, apple dumplings, and cobblers. It makes a piquant apple juice that is practically cider just straight out of the press. You can harness that potential party-in-your-mouth by adding half a Cubed Granny Smith apple to your next smoothie. 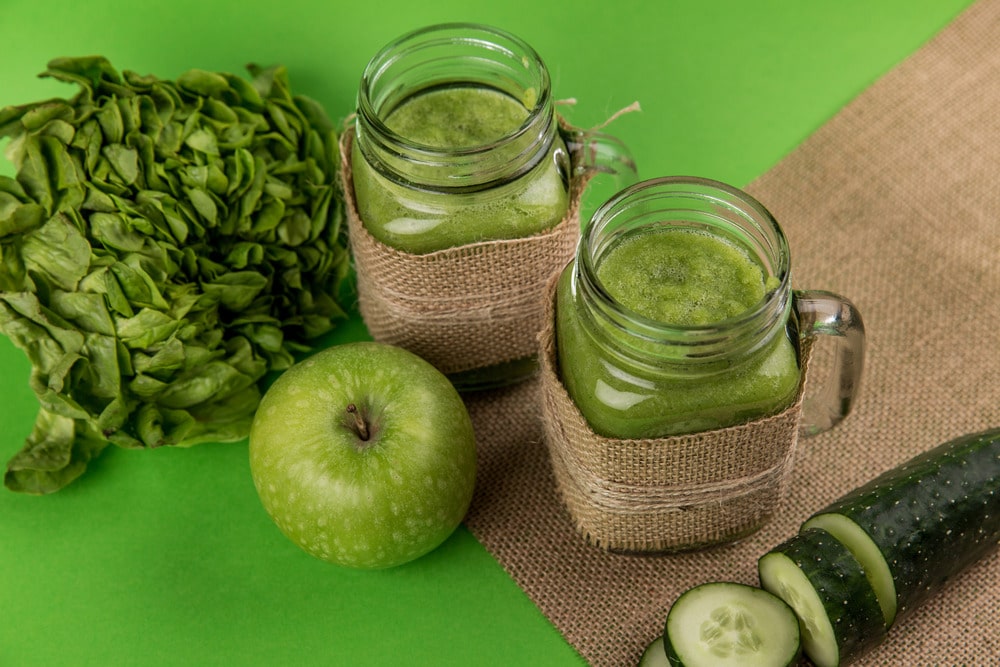 Granny Smith apples are tart, so you can expect a Granny Smith to perk up your smoothie in the same way that the first strawberries of the season are likely to do – or maybe a little more. This green skinned apple isn’t quite as sharply flavored as a lemon, but you are going to want a little sweetener added.

Dried dates or figs are a good choice. Just one or two – don’t overdo it. Team this with a handful of fresh spinach leaves and a clipping of wheatgrass from your window box, and you almost have a flavorful health drink all on its own. Add either a splash of fresh apple juice or almond milk to create the liquid.

Summing it all up

Sour apple smoothies are a tasty way to deliver much-needed nutrition to your system. They are best when made fresh since many of the ingredients are sensitive to quick degeneration after being cut or bruised. There is no one right way to make a green apple smoothie. You can even substitute avocado for the apple if apples are off your list of allowable foods. But like all smoothies, it is a chance to experiment with a variety of foods.

When you find a combination that you like, be sure to write down the ingredients so that you can repeat the recipe. If writing them down is too much trouble, put all the ingredients together in one place and take a picture of them with your phone or tablet as a quick way to create a record of your successfully flavorful green apple smoothie.