Flaxseed is tiny brown or golden seed that gives dishes a nutty flavor and crunchy texture. Flaxseed has many uses and is commonly used as a binder, thickener, or a crust in vegan and vegetarian dishes.

Flaxseed is one of the best egg substitutes for binding and thickening, and it’s often used in vegan recipes. Flax eggs have half the calories of regular eggs, are higher in omega 3-fatty acids and fiber, but are low in protein. Learn how to make flax eggs correctly to have a plant-based alternative in vegan baking. 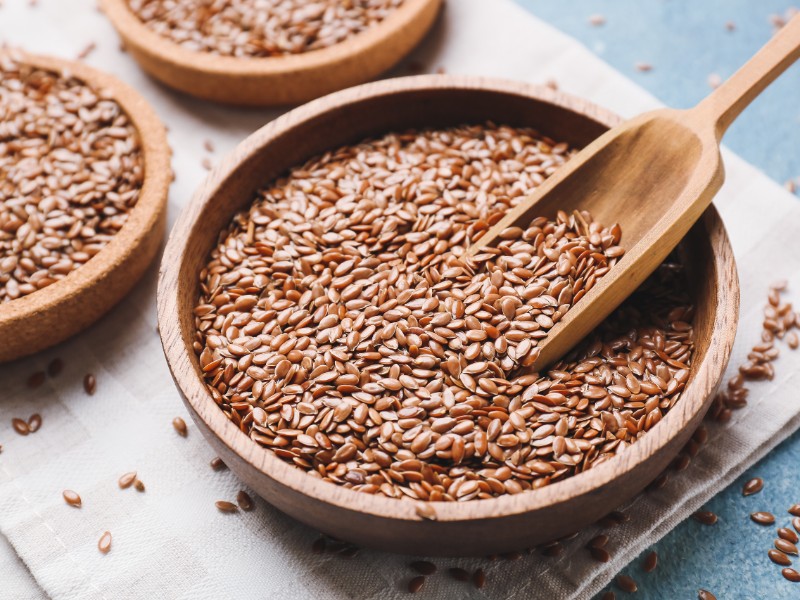 The best substitute for flaxseed is chia seeds. Chia seeds and flaxseed have many nutrients in common.

Keep in mind that chia seeds become gelatinous when exposed to moisture and can’t be used as a flaxseed replacement in all dishes. For example, soaked chia seeds aren’t a good choice for salads, but they work well as an egg substitute in some baked goods.

Chia seeds are one of the most versatile flaxseed substitutes. They can be used for savory snacks, desserts, oatmeal, and many other dishes.

When making an egg substitute, replace flaxseed with a 1:1 ratio of chia seeds. Combine ground chia seeds with three tablespoons of water and let the mixture sit for 10 minutes before adding to your recipe.

Other Flaxseed Substitutes, Alternatives, and Replacements 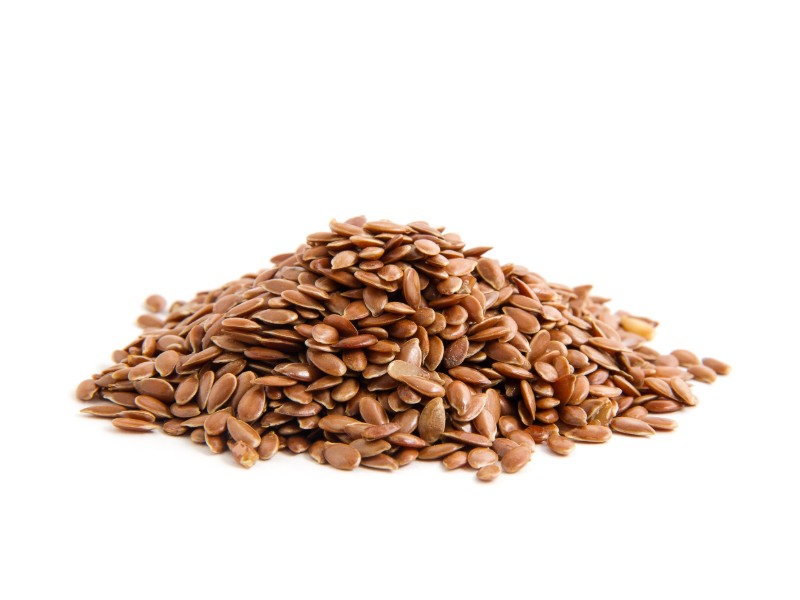 There are a number of ingredients that have a similar texture and flavor as flaxseed, and that you can use in place of flaxseed.

Hemp seeds are small, brown seeds from the Cannabis sativa plant. Unlike cannabis, hemp seeds don’t have a mind-altering effect. Hemp seeds have a nutrient-rich profile and offer many health benefits.

Like flaxseed and chia seeds, hemp seeds are rich in omega-3 fatty acids and contain an array of vitamins and minerals. Hemp seeds and flaxseed have a similar nutty flavor that’s great in many dishes.

Hemp seeds are easier to digest than flaxseed because they have a softer outer covering. The bulk of fiber in hemp seed is found in its outer shell.

Unlike chia seeds and flaxseed, hemp seeds don’t contain mucilage and aren’t a good thickening agent. Don’t use hemp seeds as a flaxseed replacement when making muffins, bread, cookies, or in other baking recipes where it should act as a thickener or binder – it won’t.

Wheat germ is a part of the wheat kernel and has an excellent nutritional value. Like flaxseed, wheat germ is an excellent source of omega fatty acids and fiber. It’s also high in vitamins B and E, and other antioxidants that neutralize free radicals in the body.

Wheat germ has a grainy texture and nutty flavor that gives baked goods a distinctive aroma and consistency. Wheat germ can function as a binder, thickener, and topping, making it a go-to substitute for flaxseed in many different recipes.

Use raw wheat germ to top cereals and yogurt, or to act as a binding agent when making muffins or pancakes. Wheat germ helps bind and thicken meatloaf, and is a nutritious thickener in smoothies. When making sourdough bread, use wheat germ instead of flaxseed to enhance the bread’s flavor and improve the texture.

Almond meal is made of ground raw, unpeeled almonds. Almond meal has a coarser texture than almond flour because it’s made with almond skins. Almond meal holds onto the nut’s flavor, and highlights notes that are slightly sweet, nutty, and a tiny bit bitter.

Almond meal is a great protein-rich egg substitute and replacement for flaxseed. It works well for binding different ingredients together and is a good thickening agent.

It has a good nutrient profile and is an excellent source of omega-6 fatty acids, fiber, and essential vitamins and minerals.

Yogurt is a milk product produced by the bacterial fermentation of milk. This creamy food has a smooth texture and mildly sour flavor because of its lactic acid content.

Yogurt that’s made from dairy-free products can also be used as a replacement for flaxseed. Plant-based yogurt is also a good alternative for lactose-intolerant people and can be used in vegan recipes.

Thick and creamy plain yogurt is a good replacement for flax eggs in baking. Yogurt acts as a binding agent and adds moisture and texture to the dough. As a substitute for flaxseed, yogurt can be used when making bread, brownies, cakes, and cookies.

Substitute four tablespoons of plain yogurt for every one tablespoon of flaxseed or flax egg in the original recipe.

Tofu is made by coagulating soy milk and then pressing the resulting curds into blocks in a process similar to cheese making.

Tofu is a good substitute for flaxseed because it acts as a binding agent, and adds moisture and density to baked goods.

Although tofu is used in many savory dishes, it also makes a good protein-rich flaxseed alternative in dessert recipes. Tofu might not work well as a binding agent in all recipes, but it works well for making dough. When baking desserts, use tofu as a flavorless binding agent in place of flaxseed.

When using tofu as a binding agent, substitute each tablespoon of flaxseed in the original recipe with one-quarter cup of blended silken tofu.

Psyllium is a form of fiber obtained from the husks of the Plantago ovata plant’s seeds. Flaxseed and psyllium husks are both great sources of fiber. Psyllium husks, however, lack both the protein and fat found in flaxseed.

Psyllium husks act as a binder and thickener and are a versatile substitute for flaxseed in baking and cooking.

One of the easiest uses of psyllium husks is to thicken a shake, smoothie, gravy, soup, or dressing. To substitute flax eggs, mix one teaspoon of psyllium husks with three tablespoons of water and set aside for 10 to 15 minutes.

For most recipes, use psyllium husks as a 1:1 replacement for flaxseed.

Pumpkin seed meal is made by finely-grinding raw, fresh pumpkin seeds. The resulting meal has a light and fluffy texture and a slightly earthy flavor that works well with both sweet and savory dishes. 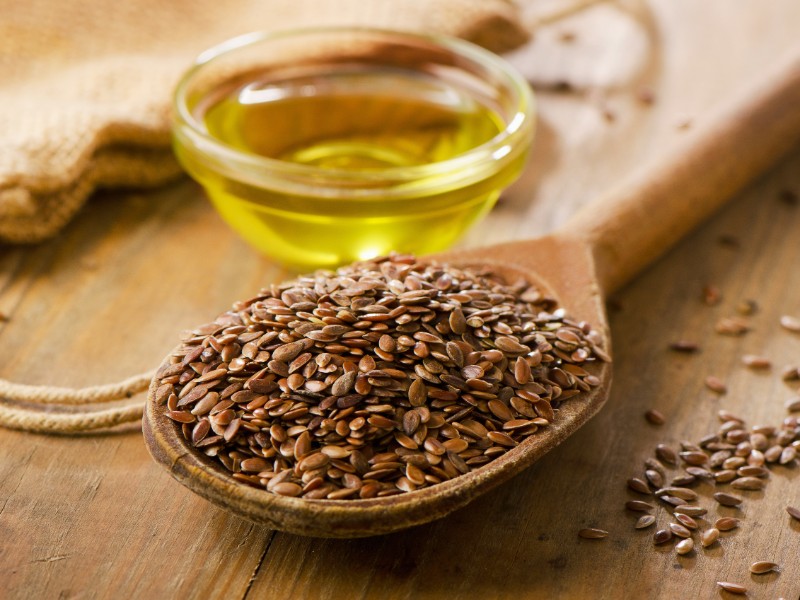 Sesame seeds are small, oil-rich seeds that grow in pods on the Sesamum indicum plant. These tiny seeds have a nutty and sweet flavor and a slightly crunchy texture.

Like flaxseed, white sesame seeds are full of nutrients and a great source of fiber, protein, and omega-3 and -6 fatty acids.

Applesauce is a sauce made of peeled or unpeeled apples. Applesauce can be spiced or sweetened, and is commonly used as a flaxseed substitute in baking.

Like flaxseed, applesauce is a good substitute for eggs and a popular ingredient in vegan baked goods. Applesauce is a good binding agent and has a sweet and tart flavor that goes well with cakes, quick breads, pancakes, and muffins.

When using applesauce instead of flax eggs in baking, substitute ¼ cup of applesauce for one flax egg. 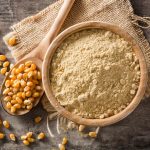 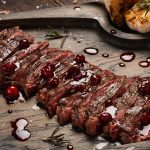