A seven-course meal doesn’t have to be heavy or complex. While it might mean a table groaning with food to some people, in reality, it can be very light and simple. The Italian and the  French both have a simple seven-course menu. The secret of the seven-course dinner is the 7-course meal order. You might have familiar and recognizable foods, but the order in which they are served is important.

What is a 7 Course Meal?

A seven-course meal is a meal during which select foods are offered to guests in a specific order. The Italian and French 7 course meals are quite similar, beginning with finger foods, a soup, perhaps a salad, then the main course, followed up by a lighter offering, then a dessert, and finally an after-dinner drink. 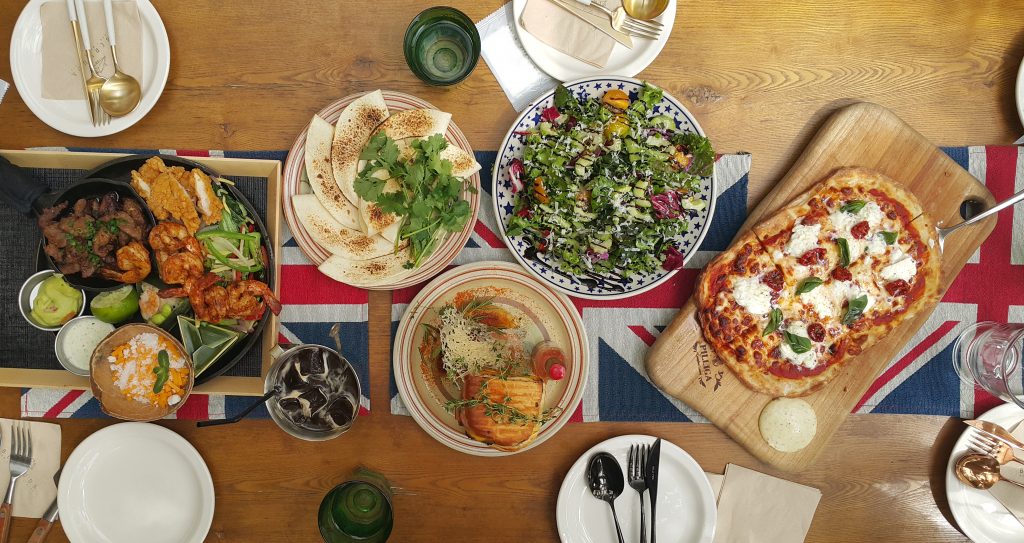 Meals can have nine or more courses, but those become rather complex, including palate cleansers and a chance for your stomach to adjust and catch up to all the food coming your way. Just to give you an idea, here are the meal orders for French, then Italian seven-course meals:

Sometimes there is a drink after the coffee. It might be called the digestivo or the ammazzacaffe “coffee killer.”  It will be a liquor or similar beverage.

Coffee is served after the dessert, not with it, and a cognac might follow after the coffee.

If you Americanize the courses, you can produce even greater differences while still maintaining the seven-course meal concept. Let’s take a look at how that might work.

Just to take the this meal down to its most basic possible concept, let’s suppose that you are planning the meal for a group of ten-year-old who have been reading historical fiction. However, since it is a school setting, you must also keep the menu within the health constraints for school lunches. Or to put it another way, this is an exercise in simple food as a seven-course meal.

As you can see, it isn’t difficult to plan a seven-course meal, even within the constraints of foods allowed for elementary school students. It can be as elaborate or as simple as you wish and can easily be made up of familiar foods.

You might notice that there are no nuts in this menu. That is because school menus no longer include any sort of nut or nut butter because of the risk of allergies. And, of course, elementary students shouldn’t be drinking tea, coffee or alcoholic beverages, so those are off the menu, as well. Even so, this menu could easily be used to teach students the correct flatware to use at a formal dinner and to allow them to explore manners beyond picking up a food tray and side dishes in the cafeteria.

Serving the liquor afterward is a matter of judgment. If your guests will be driving home, you could skip this. If they are staying over, a little something could make a mellow conversation time to end the evening.

The French menu tends to stray over into eight or nine courses, depending on how you are counting. There can be a fish course after the soup, or you could skip that one. Or you could skip the dessert course, especially if you have several guests who are habitually dieting. To put it another way, the French seven courses are somewhat (but not entirely) flexible. Therefore, this is very much a sample course layout. 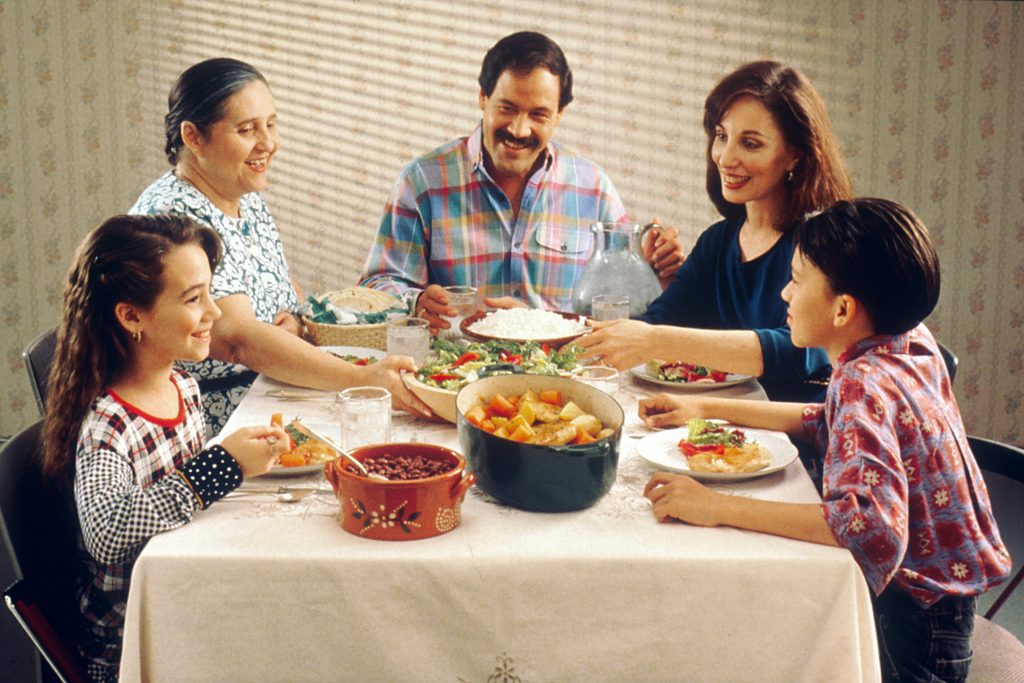 After the dessert, serve the best locally ground coffee available. Have cream and sugar available for those who want it.

As you can see, the French menu is just a little leaner than the Italian one. The Italian menu tends to lean a little more toward pasta.

Although the service method might be a little different, the seven-course meal contains the primary elements of any good food presentation. By presenting and clearing away each course, the host or hostess can control the flow of a party. The meal can progress in a leisurely fashion with plenty of time between courses for conversation.

But what happens when the food must be presented at a faster pace?

For that, let’s look at an old-fashioned harvest-hand meal from the Midwestern part of the United States.

In the late 1800s and early 1900s, large numbers of German families settled in the central part of the US. Many of them were farmers, and it was a matter of pride to do a good job feeding the hired workers who helped at haying time. Since the men needed to eat quickly and get back to the fields, the food was usually served family or buffet style. But let’s take a look at a typical menu.

Does the menu look similar to the seven course Italian and French meals? Geographically speaking, Germany isn’t all that far from France or Italy. Small surprise that European dining habits should have made their way to the farms in the Midwestern USA.

There is another way of looking at it. The combination of proteins, fruits, and vegetables provide a balanced diet that would give plenty of energy for a crew that would do manual labor throughout the rest of the afternoon. 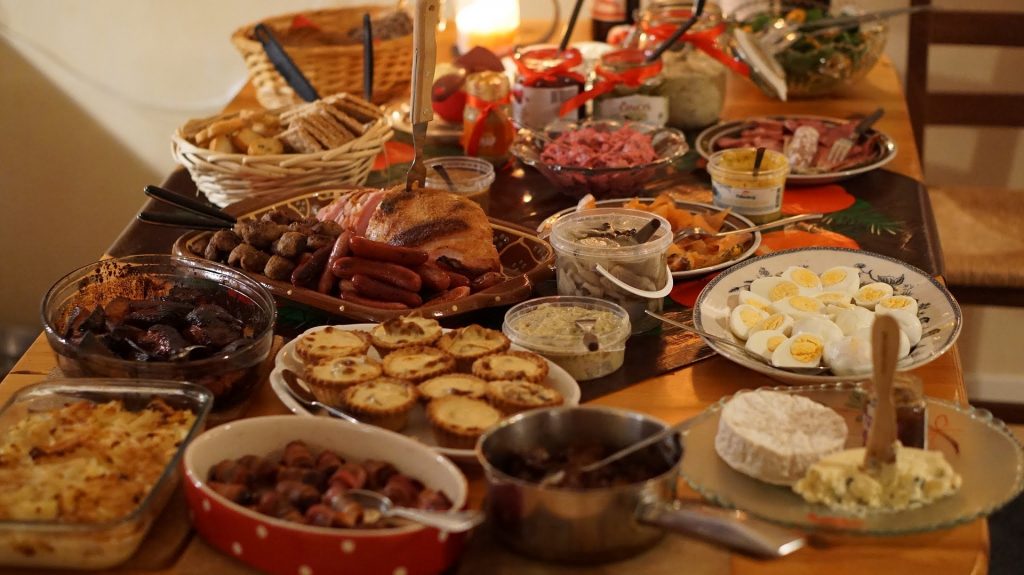 Differences Between the Formal Meal and the Casual Harvest Hand Meal

The seven-course meals were developed for leisurely dining at the close of the day when the upper class would meet for a social evening. The serving of dishes in order and the emphasis on eating each course with the correct utensil set them apart from those who labored daily. Yet the similarities between the two are there. 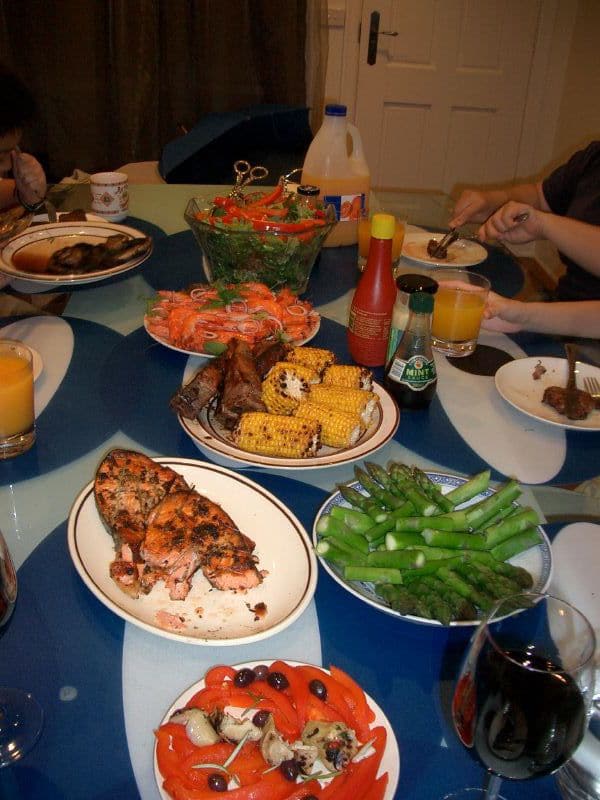 Putting Together a Seven Course Meal

Assembling a menu for this meal isn’t difficult, nor is serving one. If you will be serving a meal that you cook yourself, be sure to do most of the preparation ahead of time. When clearing away, stack the dishes for washing later so that your guests won’t feel obligated to help. Take time to sit down with your guests and talk.

Enjoy a serving of the fine food you have prepared.

The point of a seven-course meal is to appreciate and enjoy good food, good company, and finally, a nice visit after the meal is over. Keep your menu simple but varied. Plan no more than two complex dishes (one is better) and practice preparing the food before you attempt to cook it for a dinner party.

If you don’t have anyone to help with serving your 7-course meal, a rolling cart can be a huge help in getting items from and back to the kitchen. If you don’t have a dishwasher, you might want to plan for a large tub of sudsy water in the kitchen, so the dishes can soak while you finish your beautiful meal and enjoy your guests. 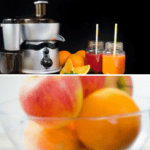 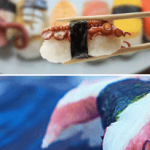 Octopus Sushi/Tako Sushi: Not To Be Confused With Taco Sushi!