Italian food is an American invention. I’m not trying to say that the Italians don’t have their own unique cuisine, of course. They love to make delicious dishes that you can’t really find outside of Italy. What I am saying is that the pizza, pasta, and tomato sauce you probably think of when you think about Italian food are all very Americanized dishes.

Marinara sauce is one of the more authentic parts of Italian-American cooking. It’s not quite the same as what you’d find in Italy, but it’s descended from a tomato-based sauce originally used for seafood. The name “marinara” comes from the word “mariner’s” and describes how fisherman would use the sauce on their freshly-caught fish.

Today, of course, the sauce is a bit different. In the US, the terms “marinara sauce” and “spaghetti sauce” are used almost interchangeably. So what’s the difference? Let’s go over the key factors that define each sauce and discuss how you can choose the right sauce for your recipe.

What Is Marinara Sauce and What Is It Used For?

Marinara sauce involves tomatoes, garlic, herbs, and onions. Like most dishes, there are some variations. In some regions and recipes, sour ingredients (like olives, capers, or wine) are added. Traditional Italian-style marinara sauce is quite thin, while many Americanized variations get pretty thick.

While you can add quite a few things to marinara sauce and still call it marinara sauce, it never contains meat, anchovies, or cheese. When you start adding these things you start creating bolognese or spaghetti sauce.

What Is The Difference Between Marinara Sauce and Spaghetti Sauce?

Some sticklers might be keen to claim that there’s no such thing as “spaghetti sauce.” Spaghetti is a food that can be eaten with a huge range of sauces, from alfredo to bolognese to marinara to a simple drizzle of olive oil. They’ll remind you that spaghetti and meatballs is an American dish, not an Italian one and that Italians are more likely to eat something like spaghetti carbonara over a tomato-based meat sauce.

They’re not wrong, of course. I think this is a poor way of looking at things, however. When you or I hear “spaghetti sauce,” we immediately think of a thick, savory tomato-based sauce, usually with meat. Rather than discarding this label out of the pursuit of unnecessary correctness, we can use it to describe an American variant of bolognese sauce. 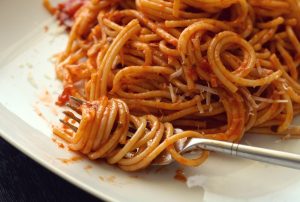 The primary difference between this American bolognese and marinara sauce is the inclusion of meat. Marinara sauce tends to have a small number of vegan ingredients. If you start a marinara sauce with ground beef, however (or another type of meat), you get something with a different flavor profile that can add richness to your dishes. 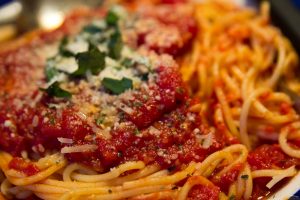 Can I Use Marinara Sauce For Spaghetti?

Of course! Spaghetti is often served with marinara sauce. If you’re after something with protein, you’ll want to serve meat on the side or add some meatballs or sausage to your pasta. This isn’t necessary, though.

Many people prefer the more subtle, delicate flavor of marinara sauce on their pasta with no meat to overpower it.

How Does Carbonara Factor Into This?

Spaghetti carbonara is a famous Italian dish that doesn’t use a tomato-based sauce. Instead, the sauce is mixed directly on the pasta with eggs, cheese, and bacon. It’s a pretty different dish overall. Carbonara is incredibly simple to make, so if you’re not familiar with the dish, you should definitely give it a try.

Should I Use Spaghetti Sauce Or Marinara Sauce For My Pasta?

American bolognese-style spaghetti sauce is pretty similar to marinara sauce. There are some differences in flavor, texture, and prep time, however. Here’s are some quick tips to decide which sauce you should use for your dish. 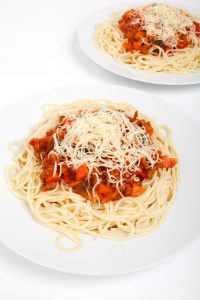 Spaghetti sauce is a bit richer and has a decidedly meaty flavor. The flavors in this sauce are usually well combined. Marinara sauce is a vehicle to deliver the complex flavors of the individual ingredients. It’s a bit less bold and you can definitely make out individual flavors a bit more.

The above differences apply to both canned, jarred, and homemade sauces. There are a few additional factors you may want to consider when making the sauces yourself.

The ingredients list for both sauces is very similar. The big difference is that spaghetti sauce requires meat. If you don’t have any meat but have the other ingredients, making marinara sauce can save you a trip to the store.

Spaghetti sauce requires you to cook meat. It also needs to be simmered for longer to achieve the desired thickness and has more ingredients overall. This means that it takes longer to make than marinara sauce. If prep time is a primary concern, choose a marinara sauce.

Now that you know the big difference between spaghetti sauce and marinara sauce, you can choose between the two in your own cooking. You’ll be able to modify recipes and create your own unique dishes that turn out just the way you want.

If you want to find out the differences between other foods (like chimichangas and burritos), be sure to check out our other pages here.