Have you ever tried a stack of delicious airfryer frozen fries? While it’s common for there to be new fads in food prep like the George Foreman Grill or the NutriBullet, nothing has quite taken off like the air fryer. I’ve been a fan for years of the deep fryer – I’ve gone to the store, purchased a quart of oil and fried up a myriad of dishes like Korean fried chicken, onion rings, and French fries.

Having said that, if you’re trying to cut saturated fats, the standard deep fryer just isn’t your friend.

Enter the air fryer: I’ve become a big fan of this invention because it’s so much healthier than frying in a vat of oil. Air fryers use hot air circulation to effectively “fry” your foods so that you can have a more health-conscious experience. Additionally, I love the fact that air fryers won’t make my home smell so much like hot oil when I’m done cooking.

Other Advantages of Using an Air Fryer

When you’re using one of these appliances, there are also a few other key benefits that you should consider. When I’ve deep fried my food in the past, I’ve had issues with the batter sticking to the mesh body of my fry basket. With an air fryer, this tends to happen less often because the fryer cooks all of the food at once. 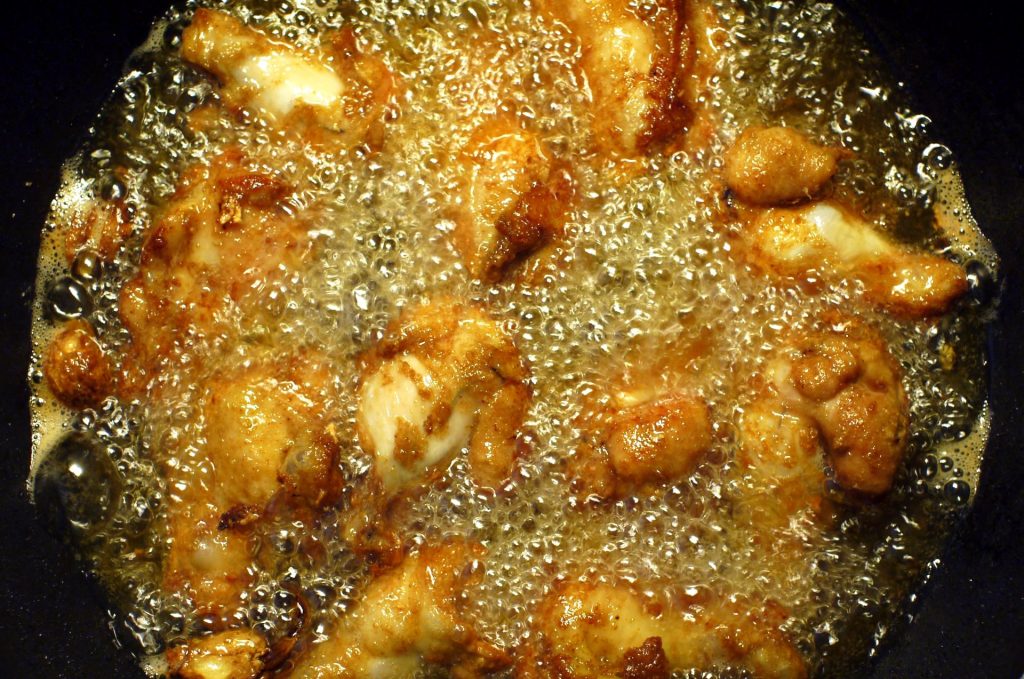 Also, with one of these appliances, you tend to save more money – I’m fairly meticulous about my oil, and I tend to throw it out after about three fry sessions. With an air fryer, you never end up having to buy oil, which will save you some cash in the long run. This also makes cleanup so much easier; you’ll never have to strain out bits of batter, and usually, most air fryers are coated in non-stick materials, so cleanup is a cinch.

With an air fryer, you can even cook multiple foods at once via the food separator. This is perfect for when you want to serve up some onion rings with your air fried French fries, and it’s perfect for frying up chicken with your sides as well.

Why Make Your Frozen Fries in an Air Fryer?

So, how much healthier are these fries? According to some sources, air frying your French fries can cut as much as 75 percent of the fat. This is primarily because you end up consuming much less of the oil, which has a lot of saturated fat. While I do suggest using a bit of oil for your French fries, even when you’re making them in an air fryer, the sheer amount of this oil is drastically reduced. 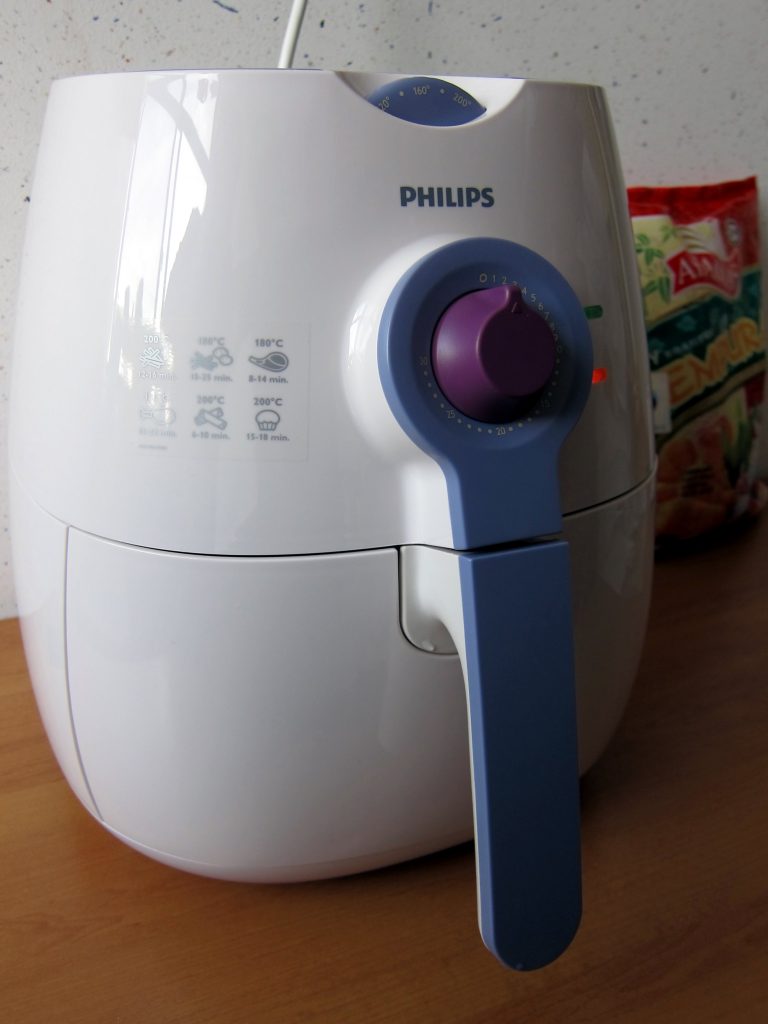 How to Cook Frozen French Fries in Airfryer

So, you love fries, but you don’t quite have enough time or patience to go cutting up potatoes so that you can air fry them. Fortunately, one of the best ways to prepare frozen French fries is in an air fryer, and in this section, I’m going to show you the best method. This method works well for frozen waffle fries, shoestring fries, or just standard fry variations of frozen French fries, and the result will be delicious air fried French fries.

There’s something elegant about French fries from a bag – you simply unpack them and air fry them up without a lot of hassle, and the air fryer makes the preparation process even simpler. Here’s what you’ll need:

Using the cooking spray, evenly coat the basket of the air fryer so that there’s no chance of the fries sticking and creating a mess. To ensure a good coating, I sometimes opt to use a paper towel.

Place about half of the bag into the basket and cook them for about 20 minutes at 400 degrees Fahrenheit. If you have a larger-capacity basket, you can fry the entire bag at once. Once the fries are thoroughly cooked in the air fryer, coat with as much salt and pepper you prefer and serve. 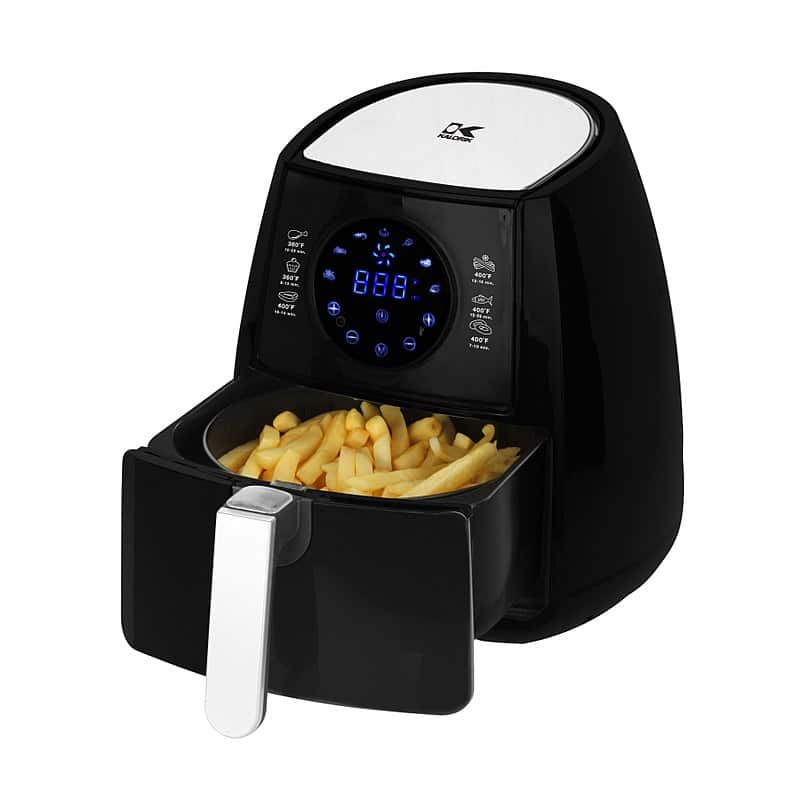 While I’m not Canadian, I’ve become a major proponent of poutine – this uniquely cheesy French fry dish is very delicious and filling, and it’s also very easy to make. Here is what you’ll need:

Start by air frying frozen French fries according to the recipe above. As the fries are cooking for the full 18-20 minutes, it’s time to prepare the gravy. In my opinion, poutine relies heavily on the gravy, so this is where you’ll spend the most effort.

Grab a small bowl and combine the cornstarch and the water so that it forms a paste. Using a skillet, melt the butter and add the flour. Cook this butter/flour mixture while stirring for about five to six minutes. 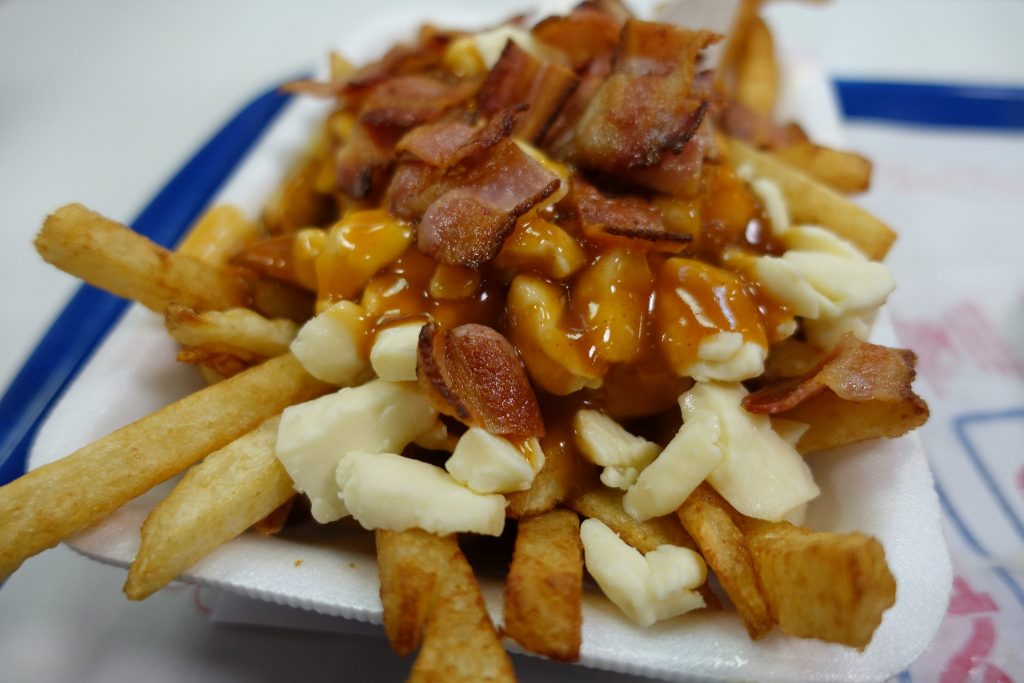 Eventually, the mixture should turn golden brown. Add in both broths and continue to cook the mixture until they begin to boil. Once you see bubbles forming, pour in the cornstarch and water mixture and simmer on medium for about five minutes. At this point, the gravy should be heavily thickened and very aromatic. Sprinkle in salt and pepper. If your fries aren’t quite ready, stir occasionally and keep the gravy warm over low heat.

Season your finished air fried frozen French fries with salt and pepper and toss them into a bowl. After they’ve cooled for about a minute, ladle the gravy into the bowl and toss the fries so that they are well-coated. Simply toss in the cheese curds or mozzarella and serve up your hot poutine while it’s nice and hot!

For this particular recipe, I suggest using a more substantial type of fry, like waffle fries because they have larger surface areas to soak up the flavor. If you are a fan of Tex-Mex, this is a recipe worth trying. It even works as a main course that doesn’t necessarily need any meat components, so if you want to go for a more vegetarian option, this is a good recipe. Also, for this recipe, I tend to shorten the fry time somewhat to about 15 minutes and let the waffle fries cook up for a few more minutes in a skillet. In any case, for this recipe, you’ll need:

Prepare your air fryer frozen French fries as described above, but only cook them for 15 minutes or until they are very lightly browned. Once they are cooked, place them in a large ovenproof skillet – for this part, I like to use a cast iron pan. Once you have the fries in the pan, toss the bacon, the onion slices, the olives, the tomatoes, the salsa, and the shredded cheese (both types) on top of the fries.

Once the fries are coated in all of your fixings, toss the entire thing into the oven at 350 degrees Fahrenheit. Cook this mixture for about five minutes or until the cheese is thoroughly melted through. Once the cheese is ready, remove the skillet from the oven and place on your stove top. Toss the jalapenos on top of your waffle fry combination and serve with sour cream.

I’m a big fan of French fries, and the air fryer has made one of my favorite foods much healthier without really sacrificing any of the flavors. Each of the recipes that I’ve featured here is delicious and can easily be made using most varieties of the air fryer frozen French fries. Try them out for yourself or increase the yield so that you can serve them up to your guests.