Can you make bacon jerky at home? Is it difficult or too time-consuming? These are some fairly common questions and they come mostly from Moms wanting to make a healthy snack for their kids. Sound familiar? Are you looking for some great bacon jerky recipes? If so, here are a few tips, hints, and yummy bacon jerky recipes to get you started.

Since bacon jerky is such a delicious treat that nobody can say “no” to, it’s kind of like that “Bet you can’t eat just one” commercial. It also has such a nice chewable texture that they’ll all want more. And, that’s not to mention that bacon smell that can get even the laziest kid out of bed and heading for the kitchen.

That’s why you should be sure to make plenty of it. The best thing about homemade bacon jerky is that you don’t have to be a wizard in the kitchen. All you need is an easy to follow bacon jerky recipe and the right tools for the job. 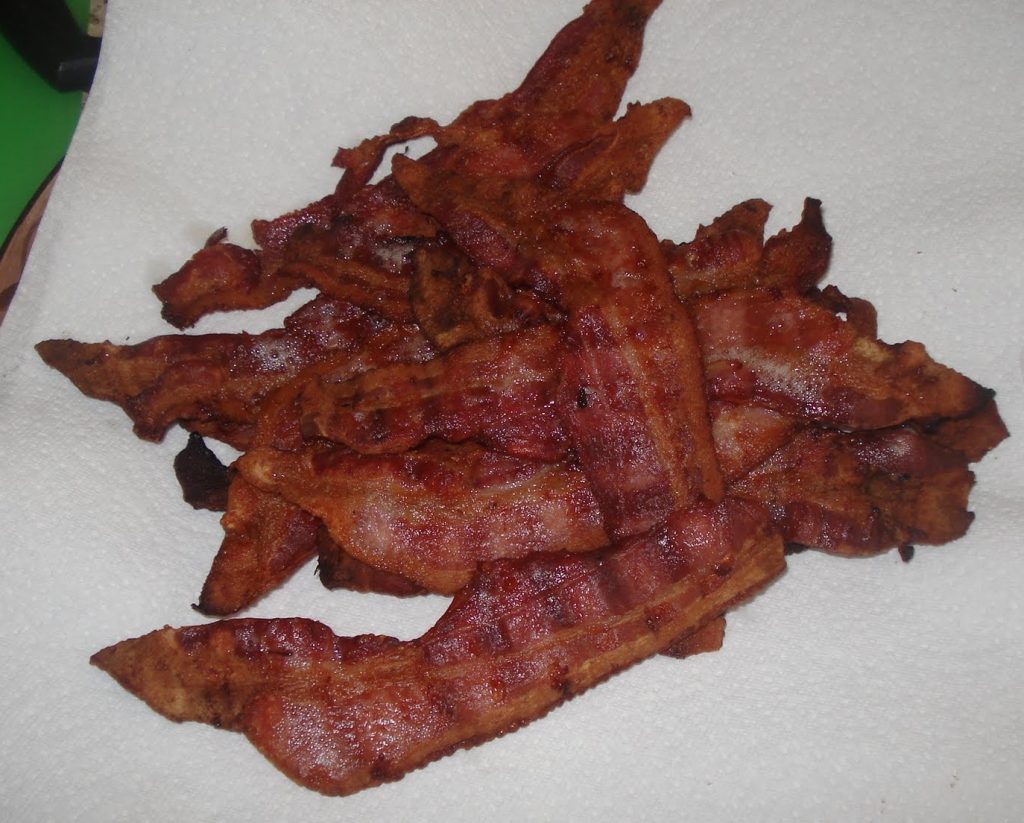 Now, besides being quite yummy, bacon jerky is also known for being pretty nutritious. Since preparation involves few additives, you know that your homemade jerky doesn’t contain any added harmful preservatives. And no, it’s not difficult to prepare. All you need is the right recipe and then you can make bacon jerky at home.

Mastering the basic recipe is your starting point and later you can invent an original bacon jerky recipe of your own.

How to Make Bacon Jerky

Basically, making bacon jerky isn’t as much of an ordeal as you might think it would be. There are, however, some important parts of the process that must be precise and the main one is the temperature. The actual cooking method is called “drying” and you must dry the meat in order for it to become dehydrated of the internal oil and fluids. And, that’s exactly why bacon jerky that is properly made will have a texture that isn’t oily but is chewable. There are really only a few steps involved in any bacon jerky recipe, including: 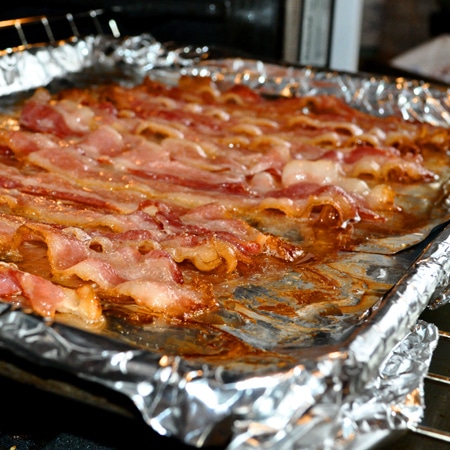 The ingredients in any bacon jerky recipe are pretty standard, although there may be a few differences depending upon the flavor you choose. Here are the basics:

When considering which piece of equipment to use for the drying process in your bacon jerky recipe, here are a few helpful hints. A food dehydrator is an ideal option as it allows you to both measure and controls the internal temperature.

That control ensures you that your bacon is drying perfectly. If you don’t have one though, a smoker or just your oven will work just as well. In fact, the only prerequisite, no matter which you use, is subjecting the bacon to the proper temperature level for getting the desired result.

If learning to make bacon jerky, whether for yourself or family and guests, is something you’d like to try, here’s a simple recipe with a little extra kick that anybody can follow and have successful results. 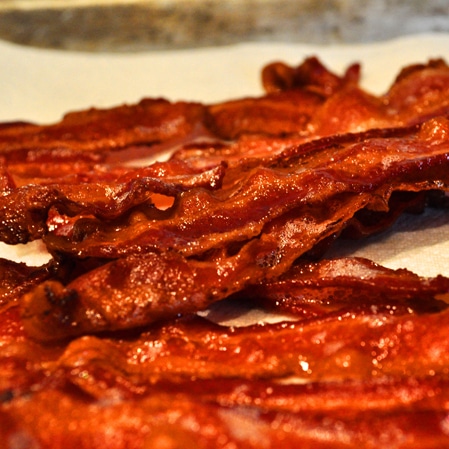 Start by heating your oven to 170 degrees, or the lowest setting if it doesn’t go down to 170. During preheating, combine half the bacon with 1/2 cup of brown sugar. Lay out your bacon strips then put them in the oven once it’s preheating. Combine one part honey and one part sriracha sauce in a bowl. Once the bacon has been in the oven for one hour, brush it with the honey/sriracha mixture. 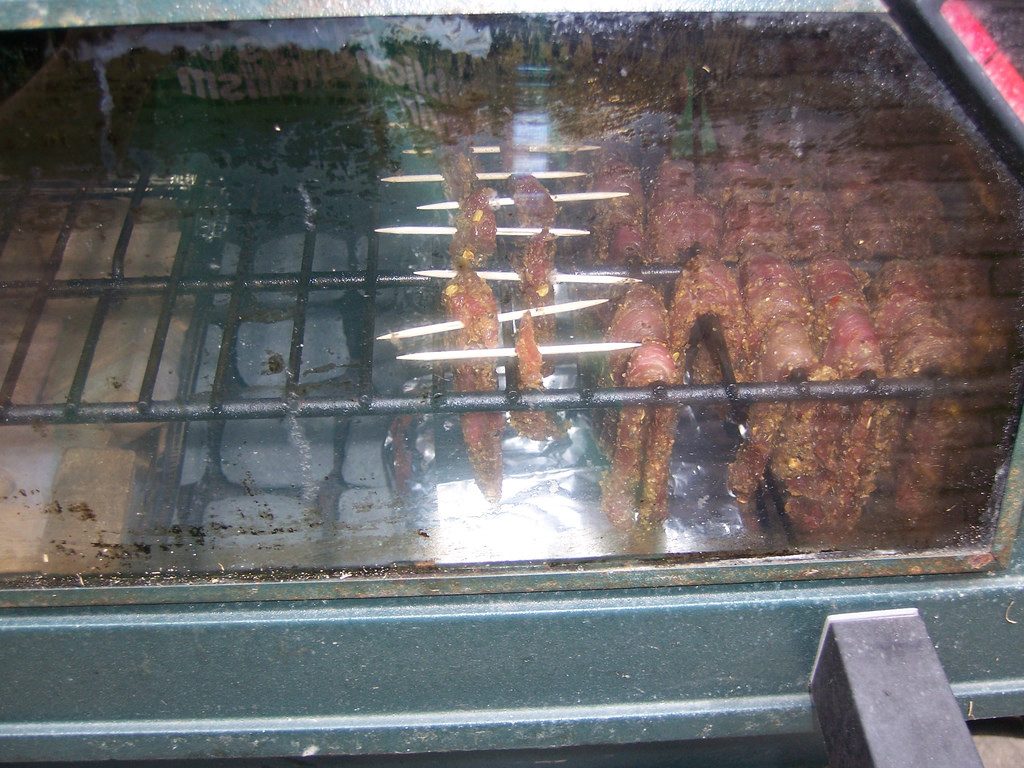 There are a number of methods for creating bacon jerky but many bacon jerky connoisseurs feel that there’s only one. It’s actually smoking because it gives the bacon a natural feel, not to mention that amazing smoked flavor. And, it’s really not that difficult either. It’s also considered to be the most cost-efficient and practical bacon jerky recipe process.

However, many chefs often wonder how you can tell the exact temperature and cooking duration as opposed to a dehydrator or oven. The definitive answer to that question is simply to heat your smoker to 165 degrees Fahrenheit because that’s the optimum drying temperature. In addition, use a food thermometer for checking your temperature consistency.

The bacon should be exposed to that same level of heat for approximately four to six hours. You can remove it from the smoker after it has gained a texture that is both firm and chewable.

Testing your bacon jerky is quite simple.

Just take a piece out and, holding it with your fingers, just shake it. If your jerky feels elastic or limp, put it back in the smoker. Keep checking your bacon jerky every 45 minutes to ensure that it’s neither undercooked nor overcooked but just right!

How to Make Bacon Jerky in a Dehydrator

This recipe takes around 6 hours and 10 minutes to complete. 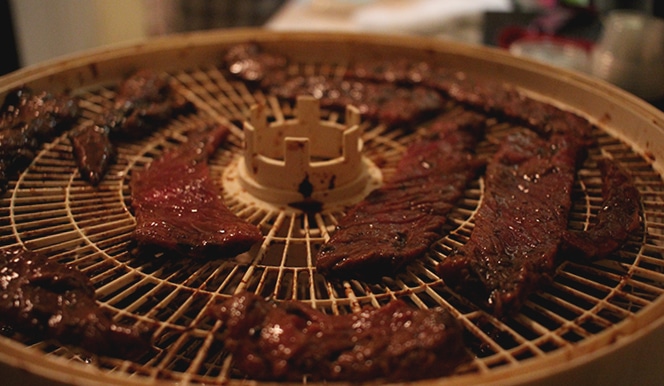 Remove your drying bacon twice during this process, wiping it with the paper towels. This is important for removing as much fat as possible. Then, just return it to your drying trays, drying the bacon until it’s easy to crumble. This will take approximately six to eight hours, depending upon what make and model of dehydrator you have. A pound of bacon will yield two to three ounces of bacon jerky. 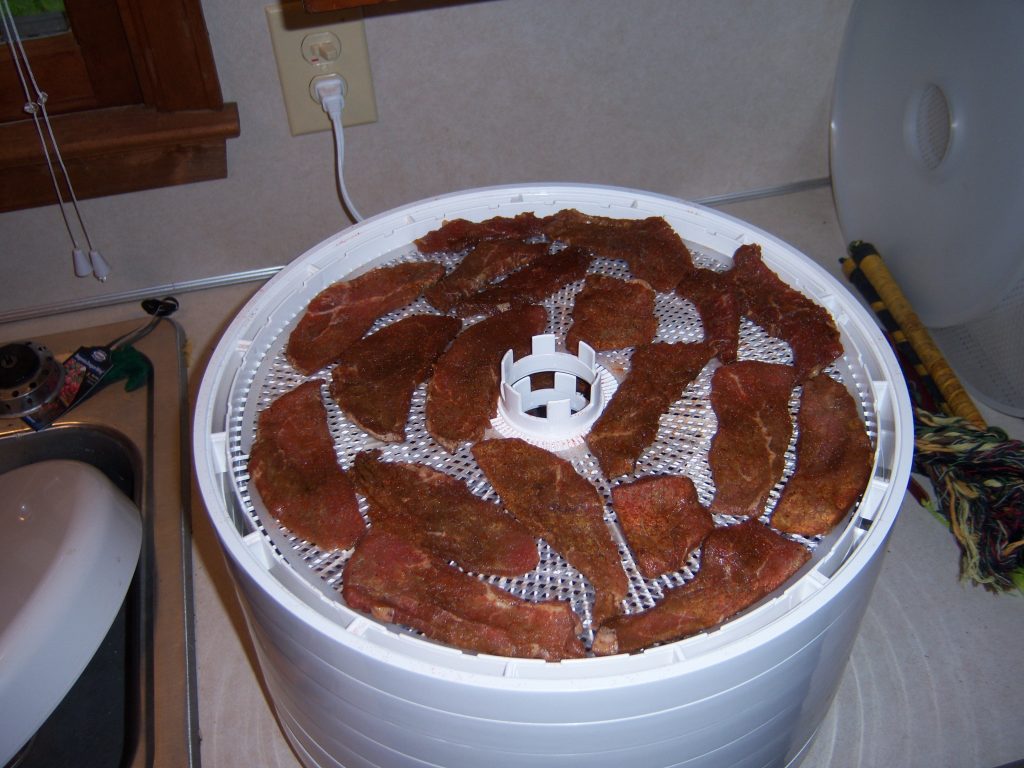 For properly dehydrating cooked bacon, electric dehydrators are the perfect kitchen appliances. They remove the moisture from your bacon via electricity, thereby reducing the effort that’s required for drying the bacon.

Use your cast iron skillet for cooking the bacon, turning it with a fork. Wipe and soak the grease from your cooked bacon both prior to and during dehydration with paper towels. Be sure to store your dried bacon in a ziplock bag or another airtight container to prevent any spoiling.

Dehydrating any kind of meat can prolong the shelf life, which allows you to enjoy it as a snack or just to rehydrate it at a later date. Cooked bacon can be dehydrated to make a tasty snack that is also packed with protein, a soup ingredient, or a salad topping. Dehydrated bacon is also great for packing to take on a camping trip or an extended hike.

What could possibly be better than candied bacon jerky? How about Candied Bourbon Bacon? Don’t drink all the bourbon, however, until you’ve saved a little for your jerky! 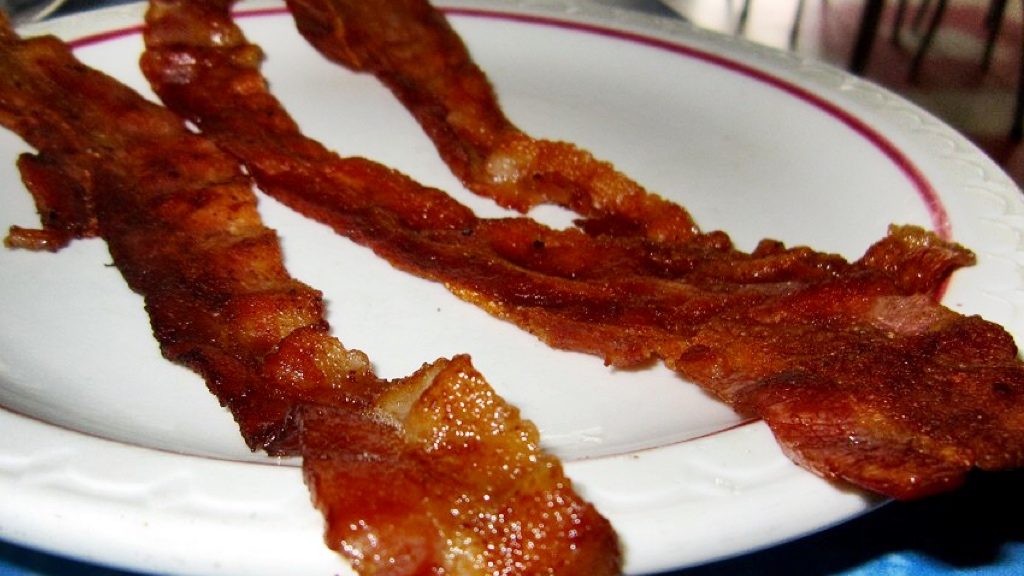 How to Cook Before Drying:

Lay your bacon on a rack in your baking dish. Mix one tablespoon of the bourbon with the brown sugar and spread the mixture on each piece of bacon. Bake at 300 degrees for one hour, or just until your bacon is crisp. Sprinkle with the rest of the bourbon.

How to Make Bacon Jerky in the Oven 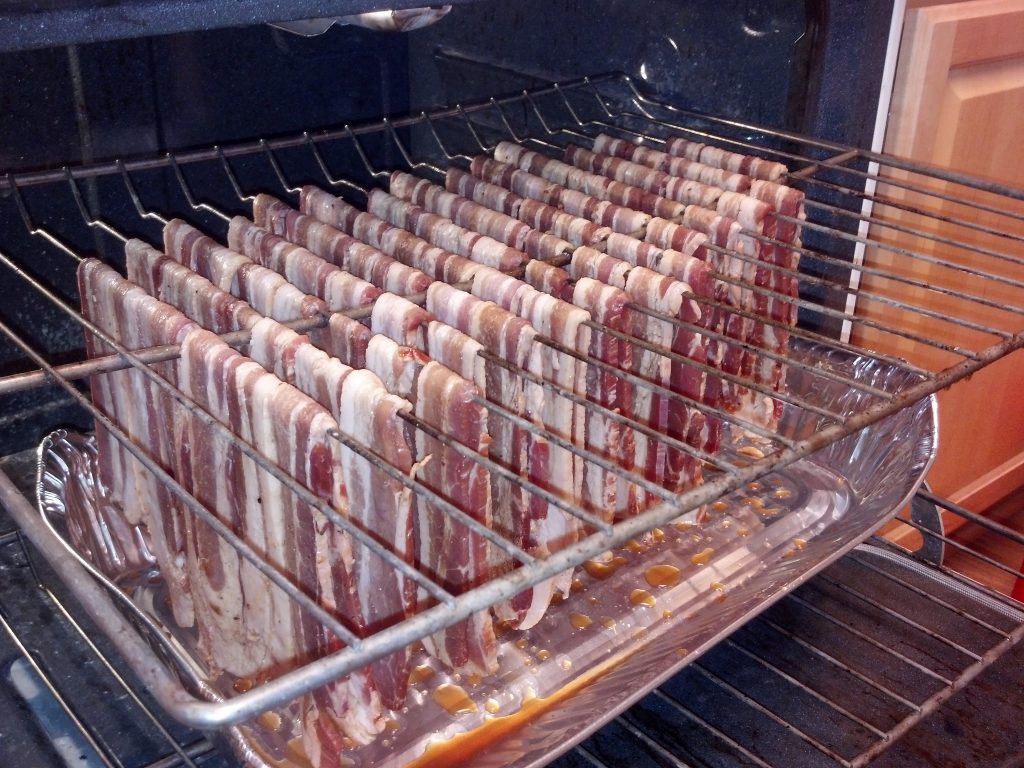 When you’re at the supermarket, do you ever pick up a package of bacon jerky only to return it to the shelf because it’s so expensive? Well, the good news is that making your own at home can save you money. And, you can make it in a variety of flavors, too.

Besides being cheaper, home-made bacon jerky also happens to be healthier.

Why you may ask?

Because you’re in complete control of how it’s cooked and what ingredients you use. You can make your bacon jerky as salty, sweet, or even spicy as your taste buds want. Most importantly, we’re going to show you why you don’t need to have a smoker or dehydrator to make it because your oven works just as well. Here’s a spicy one to try followed by some tasty marinade ideas for imparting some different flavors to your bacon jerky. 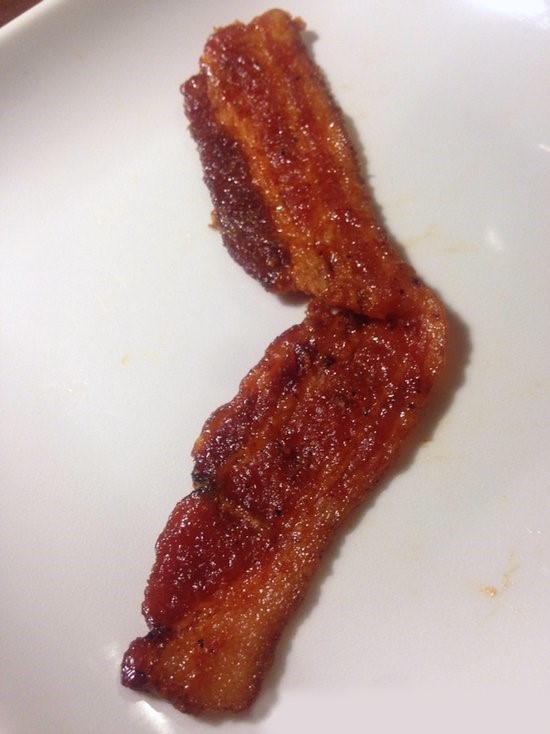 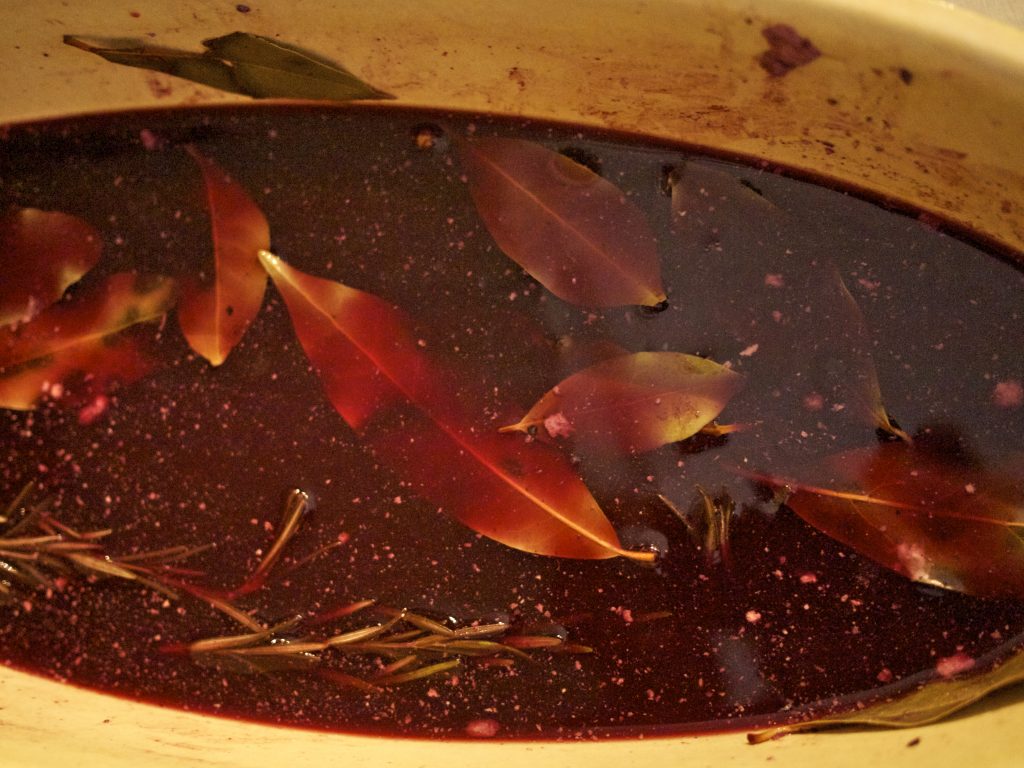 Marination can add fun flavor to your bacon jerky so you might want to try experimenting with various marinades. The marination time should be no more than 24 hours and no less than 4 hours.

This gives the marinade time for seeping through the bacon and take on the flavor of your seasonings. The longer you marinate, the tastier it will be. So, here are some basic marinades that you can try:

Try it For Yourself

It’s true that making bacon jerky takes some time but it’s also true that the entire process is pretty straightforward and uncomplicated. Once you’re familiar with the basic steps, you’ll be able to experiment with a new bacon jerky recipe to please everyone in the family. We certainly hope that we’ve helped you to learn how to make your own homemade bacon jerky. You, too, can make delicious and affordable bacon jerky in the comfort of your own home.