Mexican food is delicious and convenient. When I’m hungry at some odd hour of the night or I want something cheap, fast, and easy to eat, I love visiting a taqueria and grabbing a burrito.

Despite this, I’ve had many of my friends tell me that they’re unfamiliar with half of the things on our local Mexican restaurant’s menu. They’ve managed to get by so far by only ordering chicken burritos and simply ignoring any choice that might bring variety to their palate. Worse, when I get something that features tortillas but isn’t a burrito, they lump it in with the other options and simply call it “that thing you got last time.” 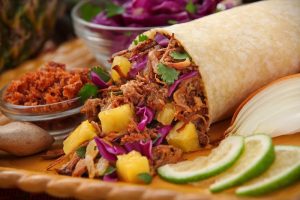 Some of my friends are lost causes. You don’t have to be one, however. Here’s a quick rundown of several common types of Mexican food and what characteristics define each of them.

What Is A Burrito?

Traditionally, a burrito involves a flour tortilla that’s fully wrapped around one or more ingredients. In other words, you could call a Subway “wrap” a burrito. Burritos can be filled with just about anything, including meat, cheese, eggs, sausage, sauce, beans, and several different types of vegetables.

There’s a huge amount of regional difference when it comes to burrito fillings. The first burritos (and the ones you’ll still find in northern Mexico) were fairly small and made with one or two ingredients only. Traditional fillings include meat, cheese, vegetables, sauce, rice, beans, and potatoes. 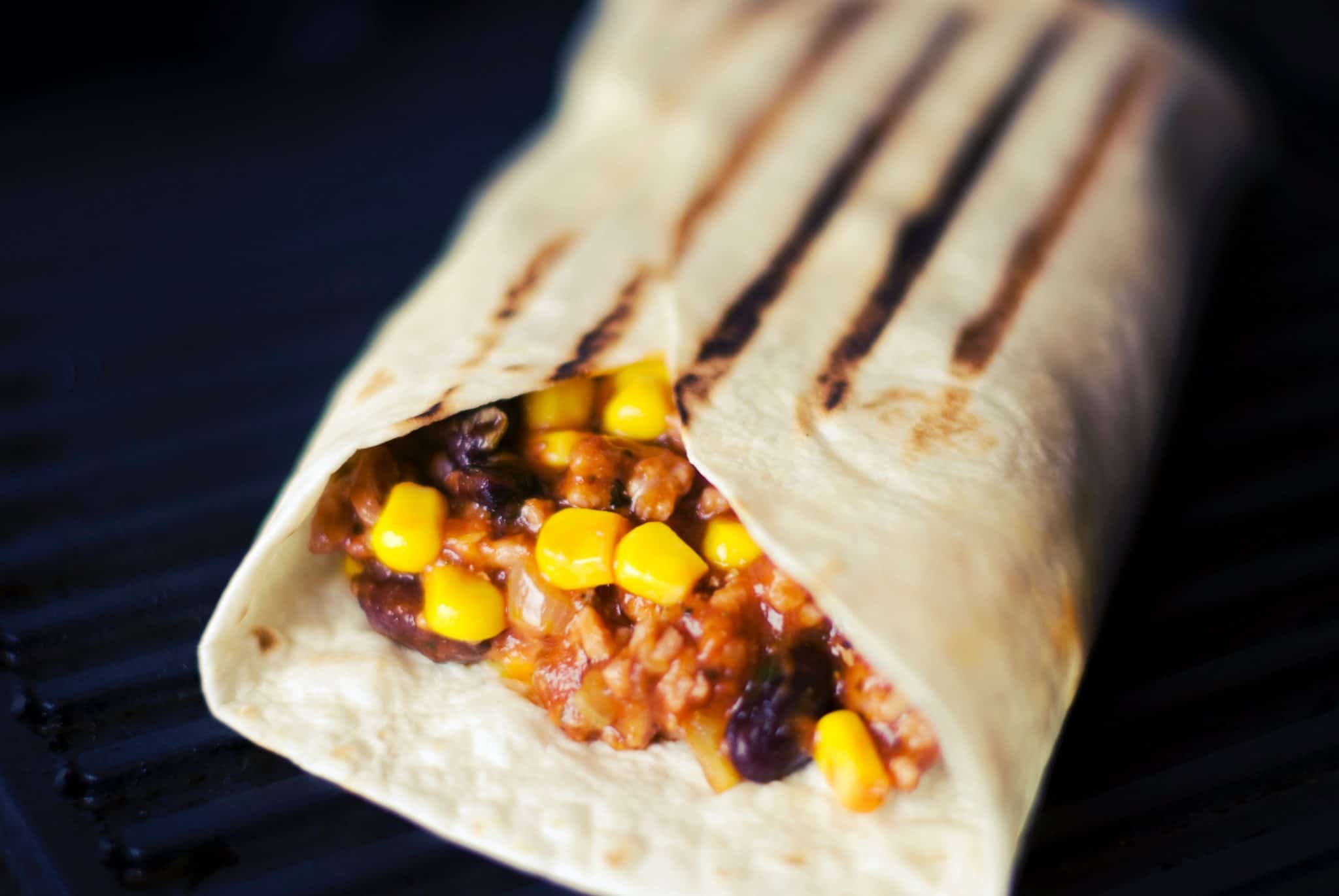 If you’re not from the southern United States, you probably think of a San Fransisco-style burrito when you hear the term. These burritos are large and usually have lots of ingredients. A fully loaded SF-style burrito might have whole beans, cheese, meat, lettuce, salsa, sour cream, rice, and guacamole. The burritos Chipotle serves are good examples of SF-style burritos.

San Diego style burritos eschew the “filler” ingredients in this list. They’re still big, but they’ll often only contain meat, pico de gallo, and guacamole. One notable exception is the “California burrito,” which contains french fries and cheese in addition to the usual blend of carne asada, guacamole, and pico de gallo. You mostly find California burritos in taquerias in Southern California and Texas.

What Is An Enchilada?

Enchiladas are small corn tortillas wrapped around a filling. They’re usually served in a bed of sauce with a sprinkling of cheese on top. The sauce and fillings both vary somewhat based on where you are and what you order. 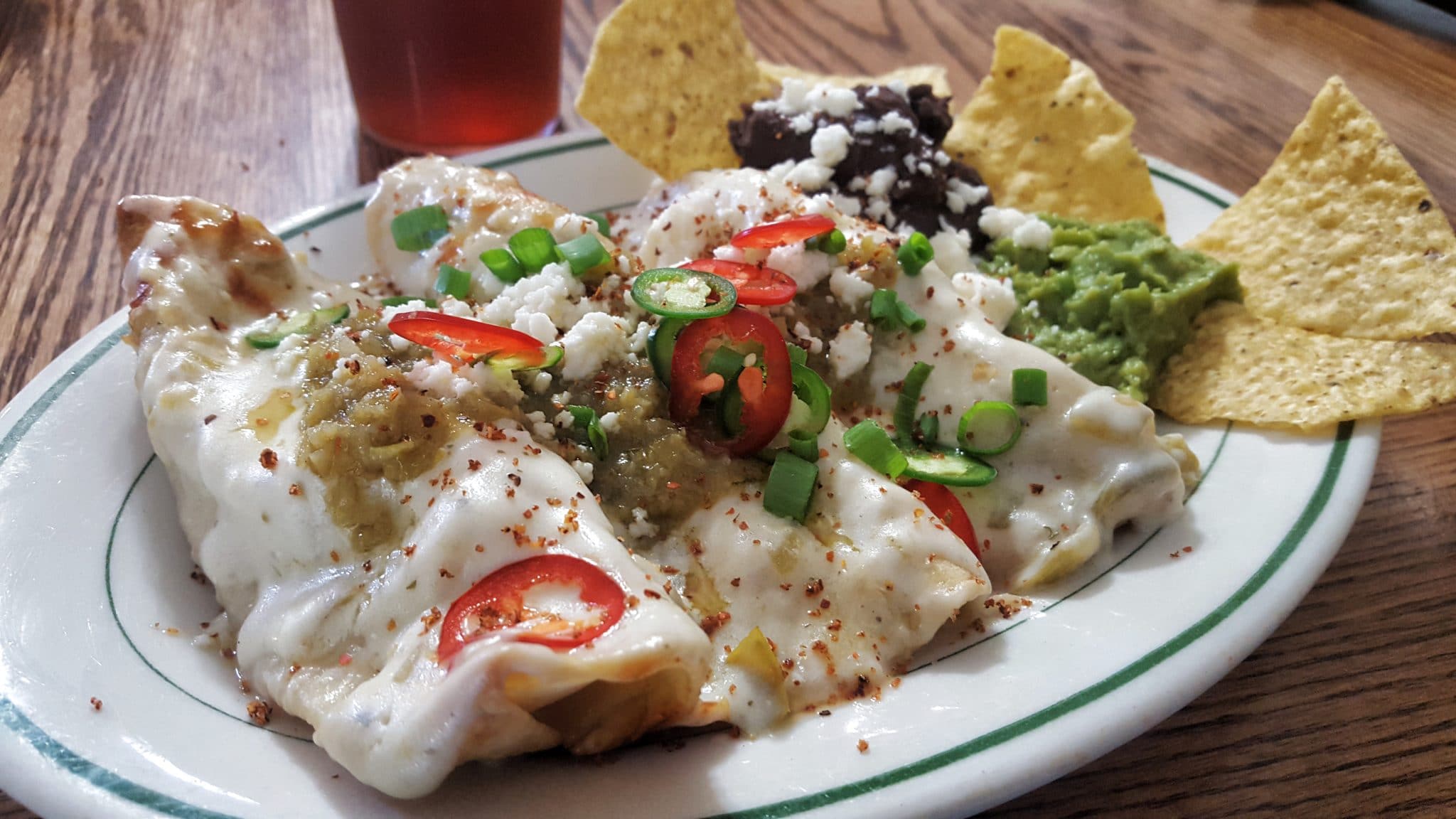 There are two important differences between an enchilada and a burrito. First, burritos usually are made with flour tortillas, while enchiladas are usually made with corn tortillas. Second, you eat enchiladas with a fork. You pretty much have to – they’re literally smothered with sauce. You usually eat a burrito with your hands. Enchiladas are also fairly small individually, so a regular serving involves three or more enchiladas in a row on a single plate (or takeout tray).

Enchiladas usually are stuffed with meat and not much else, but you can find them with a variety of fillings. Traditionally, the sauce used is chili-based (“enchilada” means “to season with chili”) but you can find Tex-mex style enchiladas that don’t use any chilis at all.

What Is A Chimichanga?

Chimichangas are deep fried burritos. Fillings vary based on location and exactly what the chef is going for, but I’m most familiar with chimichangas having slow-cooked beef and peppers inside of them. Other fillings include rice, beans, cheese, and different types of meat. Chimichangas are often served with a generous helping of sour cream, guacamole, enchilada sauce, and/or cheese on top, although this also varies. Notably, you usually don’t find these things inside the burrito due to the fact that it’s deep fried. 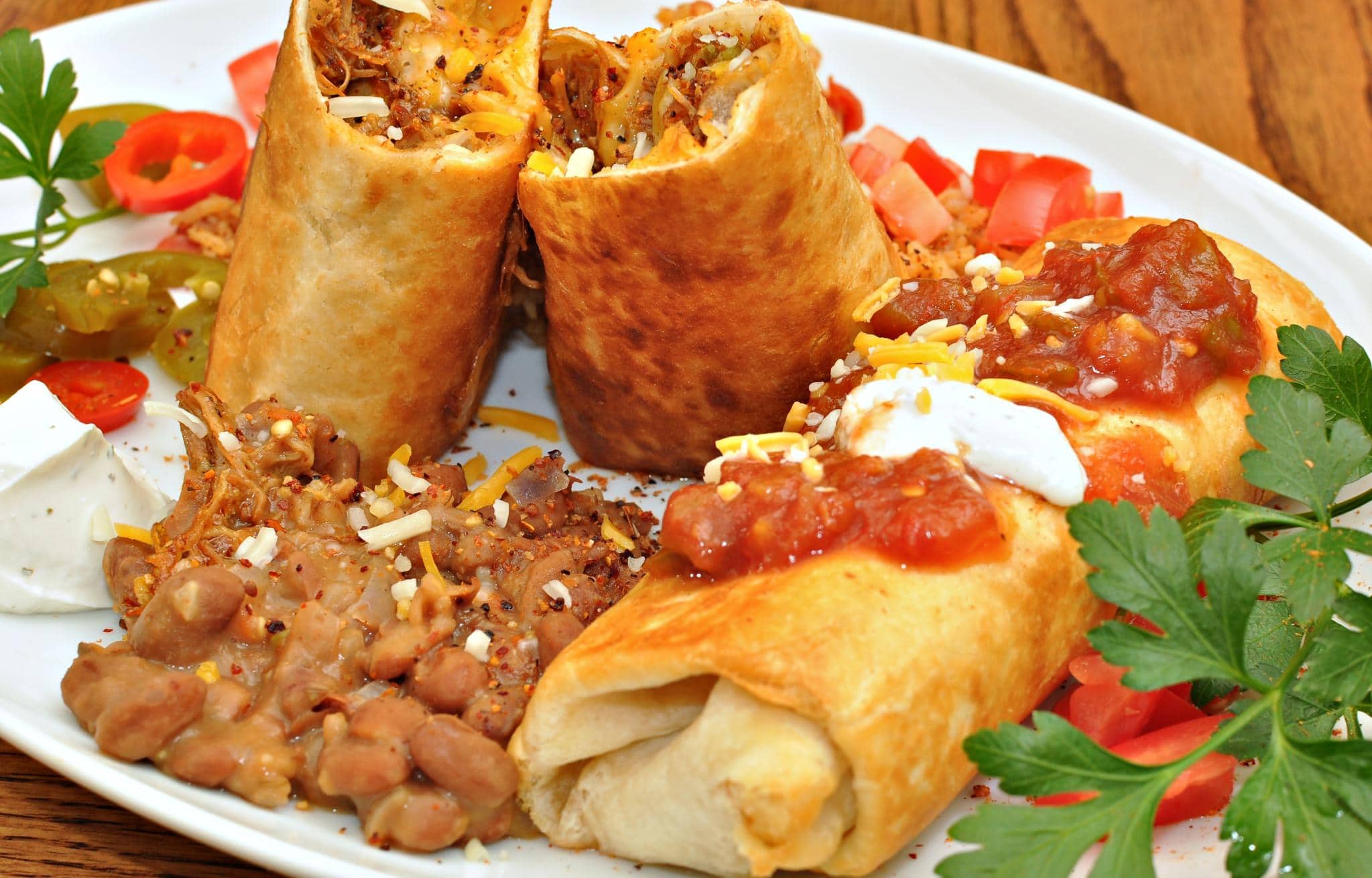 It’s thought that chimichanga burritos were invented in Arizona, but they’ve since spread to the whole southwestern United States.

The style of chimichanga that I’m most used to is actually closer to an enchilada than a burrito. While it’s made with a flour tortilla instead of a corn tortilla, it’s covered in sauce and cheese, doesn’t have many non-meat fillings, and requires the use of a fork (and knife) to eat. On the other hand, chimichangas are pretty big (like a SF or SD-style burrito) and don’t technically need to be covered with messy liquid ingredients. You can certainly try to pick up a dry chimichanga and eat it like a regular burrito, but this may still be awkward. It’ll be very hot and have a bit of crunch due to the fried tortilla.

You can find frozen chimichangas in many grocery stores in the United States. While these fit the definition of “deep fried burrito“,they’re not very similar to what you get when you order a chimichanga in most restaurants. Instead, you get a small frozen burrito with a bit of crunch on the edges that’s actually pretty easy to eat by hand. There’s nothing wrong with these, of course, but they’re certainly not the only style of chimichanga around.

Chimichanga vs Burrito vs Enchilada: The Final Answer 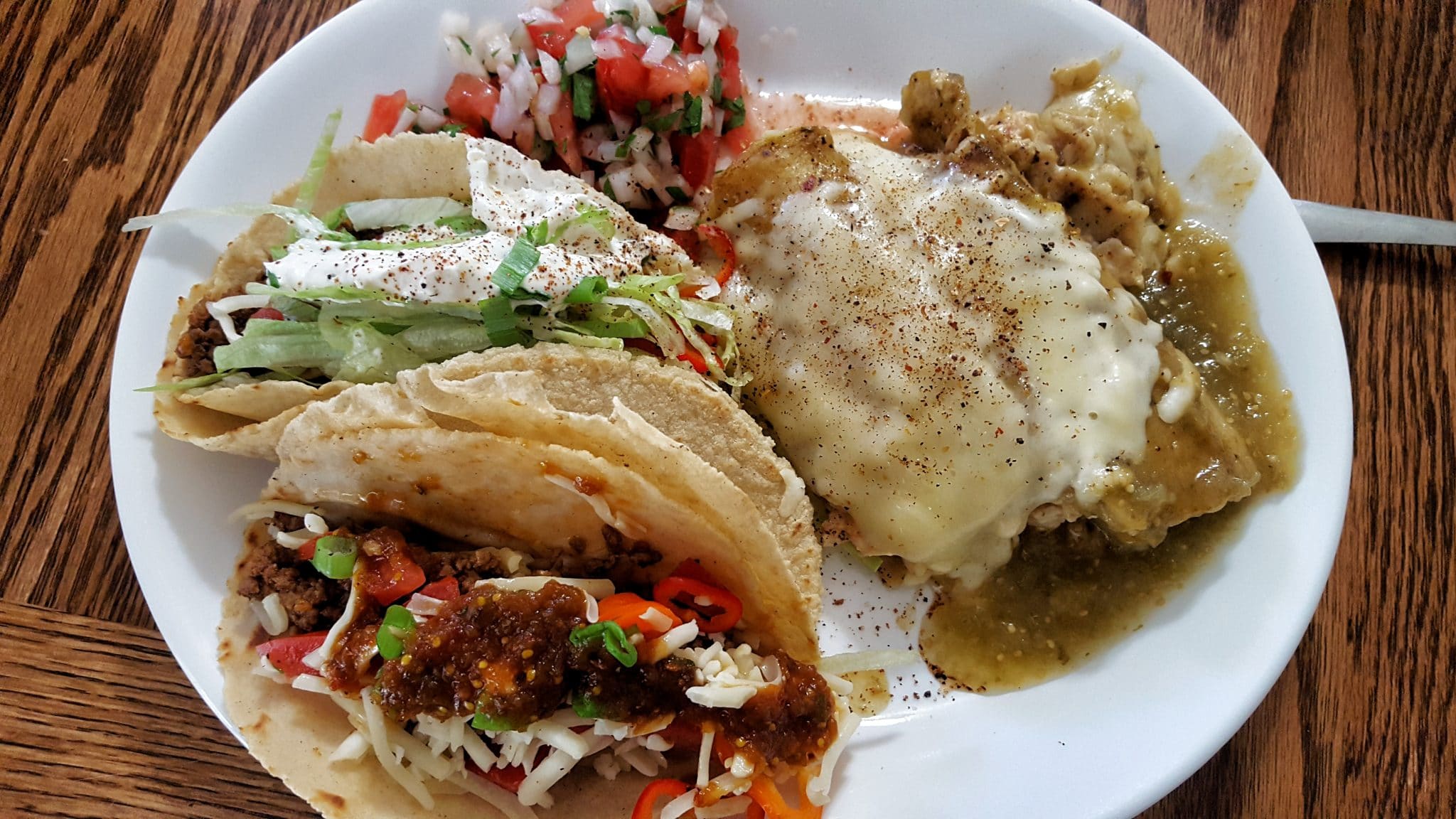 To review: a burrito involves a flour tortilla wrapped around fillings, which vary quite a lot. Enchiladas involve corn tortillas that wrap around meat and are served with lots of sauce. Chimichangas are deep fried burritos, although they’re often served in a way that’s more reminiscent of enchiladas than burritos. You can usually eat burritos with your hands, while you have to eat enchiladas and some chimichangas with a fork.

Of course, you don’t need to stick to these specifications in your own cooking. While it’s handy to know what you’ll get when you order at a restaurant, there’s no need for you to follow these rules when you make food for yourself. You can make burritos with corn tortillas, deep fry an enchilada and make a new dish, or anything else that strikes your fancy. If it sounds tasty, try it first then worry about what it’s called afterward. 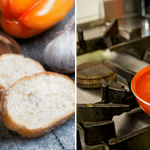 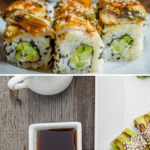 Japanese Dragon Roll – A Sushi With No Parallel!