Indian food is my absolute favorite for entertaining people for the first time. When you’re hosting dinner, there’s always some pressure to deliver something that’s simultaneously exotic, fancy, and accessible.

For me, chicken curries are the very best way to achieve this trifecta. Dishes like this butter chicken recipe are incredibly tasty and manage to feel bold and unusual without excessive spice or odd flavors.

Make It Your Own

I also love Indian food because of how customizable it is. While I have a standard recipe that I’ve written down (and transcribed for you below), the mixture of spices and flavors that you put into your curry is very much up to you. If you like cinnamon, add more!

Try using coconut milk instead of heavy cream. Vary the proportions of the spices you use until you find the perfect blend for you. If you want to kick things up a notch, try adding some sliced chilis to the curry in order to give this flavorful dish a bit more kick.

Any true fan of Indian food will tell you that there’s nothing better than fresh naan bread to go with a curry dish like this. If you want to be restaurant-authentic in your preparation, try serving this butter chicken with warm naan, jasmine rice, and black tea.

Of course, these things aren’t always easy to find. If you don’t have a local market that sells fresh naan (and you don’t want to make it yourself), try brushing pita bread with a bit of garlic-infused butter and toasting it very lightly. You’ll get the next best thing.

Is Butter Chicken Easy To Make?

This dish isn’t as simple as heating a frozen pizza or cooking pasta from a box. That said, none of the steps involved in preparing it are particularly difficult.

If you take your time, go slow, and follow the instructions, you’ll be able to make a delicious butter chicken in the style of Sanjeev Kapoor, even if you’re a total novice when it comes to cooking.

Without further ado, here’s the recipe: 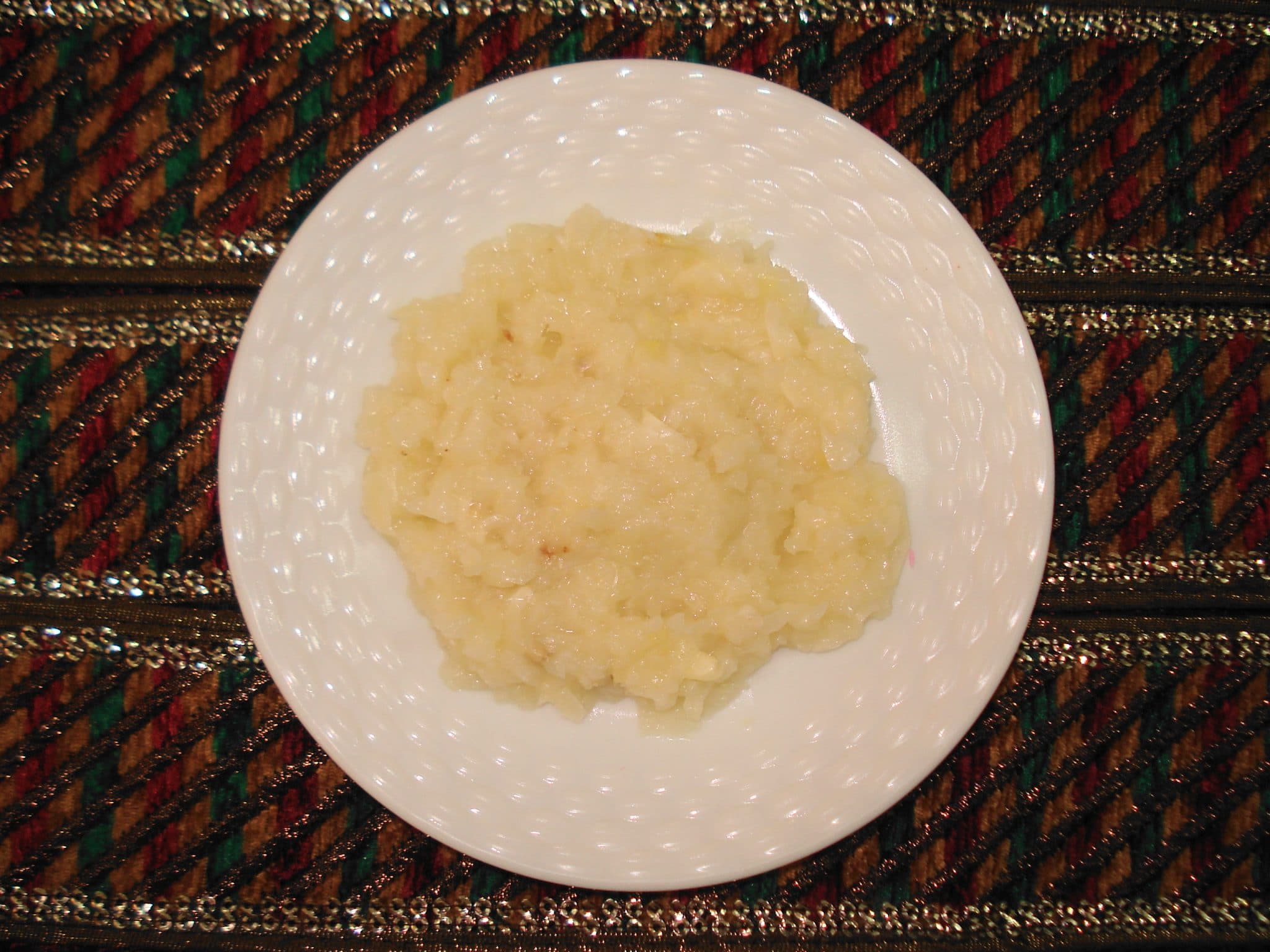 If you don’t have ginger or garlic paste handy, don’t worry! That’s totally normal. You need about 3 teaspoons total (or a tablespoon) of each in order to make this dish. I prefer to make a combination ginger/garlic paste when I make this recipe.

In order to make it yourself, simply put garlic and ginger in a food processor (or blender) with a bit of water, edible oil, and a hint of lemon juice. Don’t worry too much about the proportions. Your goal is simply to pulverize the crap out of your ginger and garlic in order to maximize the surface area of these flavorful roots. The liquids simply serve as a medium to make processing things easier.

Garam masala is an Indian spice blend that makes cooking curries like this one easier. You can safely omit it entirely from this recipe and use cumin instead. The taste will be pretty close since you’re adding most of the other spices found in garam masala on their own. 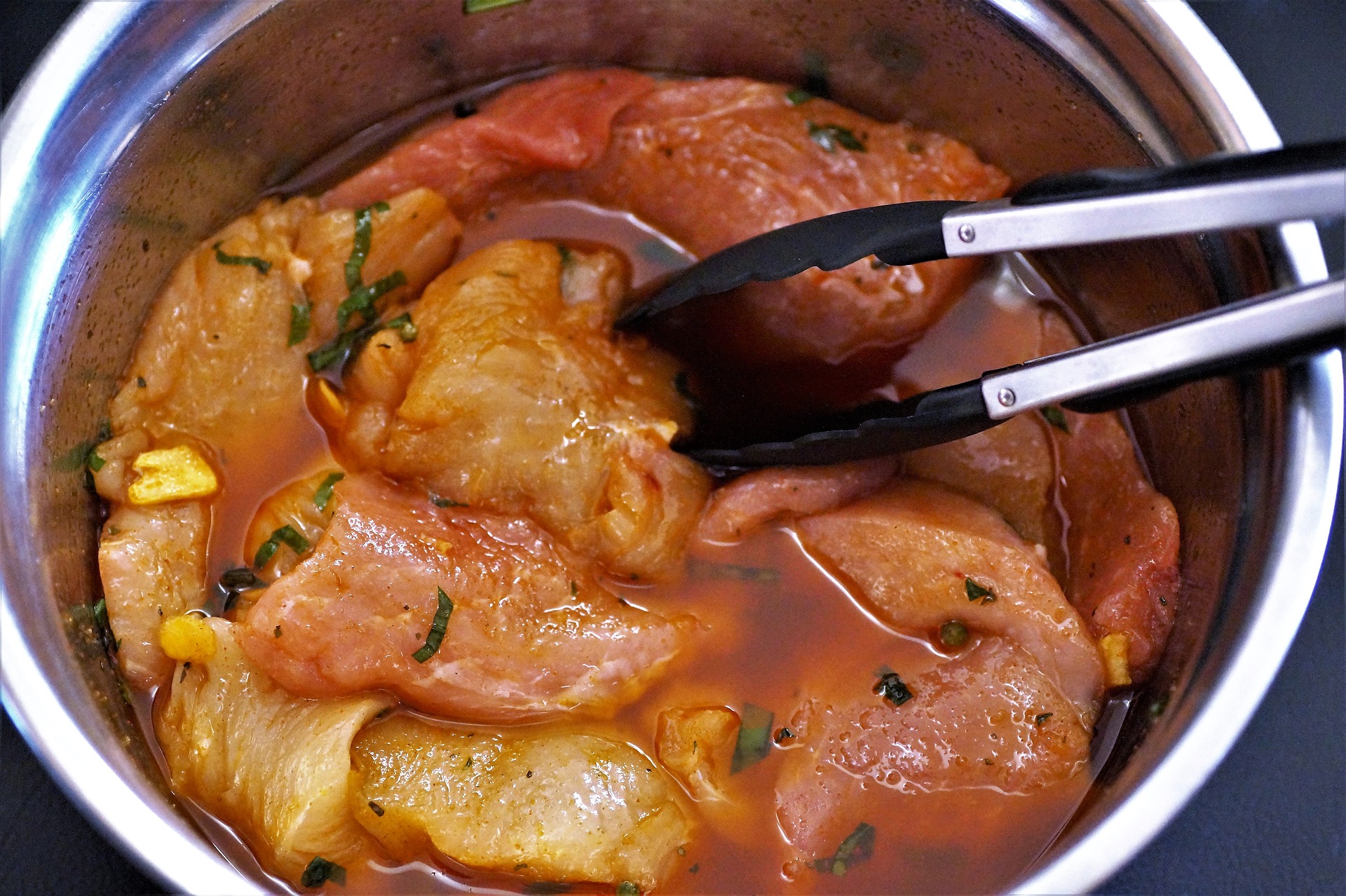 About a half an hour before you want to marinade your chicken, rub it with a mix of chili powder, salt, and lemon juice. Let it sit like this in the fridge for at least 30 minutes. Don’t let it sit for more than a few hours, however, as you’re going to marinade it afterward.

To marinate the chicken, mix the yogurt, garlic and ginger paste, chili powder, and garam masala (or cumin) as well as the salt to form a paste. Then, generously coat your chicken with this paste and throw it back in the fridge. You can add a bit more salt if you like, but I find that the chicken is plenty salty already due to the dry-brine we’ve performed.

Let the chicken marinade for a few hours, at least three but not more than 12. 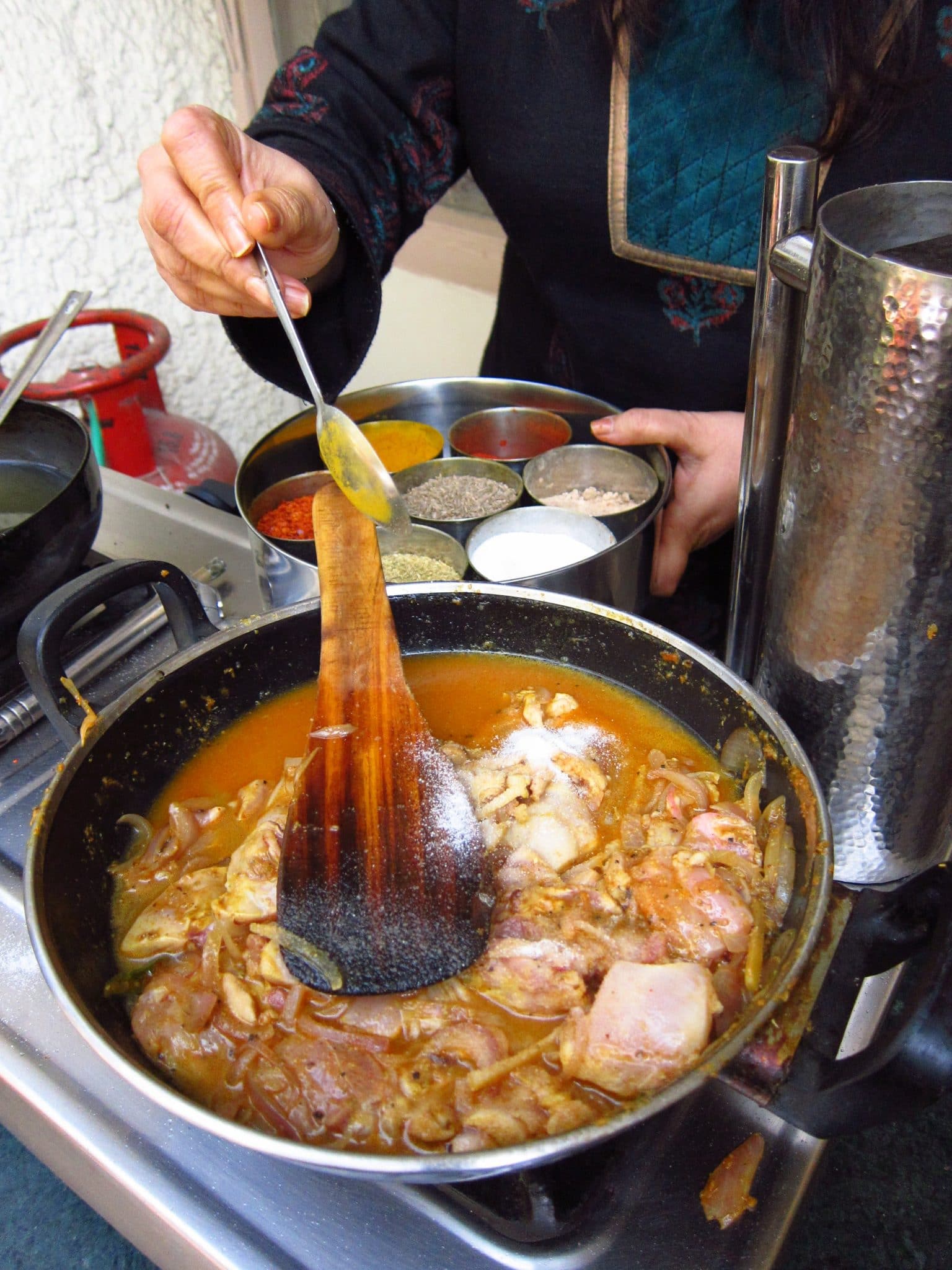 Sanjeev Kapoor prefers to bake his chicken at 400 F for about twelve minutes. This works, but I’m a fan of frying it in a bit of oil (or butter) instead. In either case, you’ll want to discard any excess marinade before you cook it. You don’t need to rinse off the chicken or anything, but any marinade that’s left over in the bag after you’ve removed the chicken should be thrown out.

If you want your chicken to be a bit more buttery, you can consider basting it in a couple tablespoons of butter as the cooking process nears completion. I find that there’s plenty of butter in the curry to satisfy my needs.

First, you’ll want to grind the whole spices you may be using. It’s totally fine if you prefer to use pre-ground cloves, cinnamon, and cardamom instead, but you’ll need to fiddle with the proportions a bit. It won’t be as strong as the stuff you grind yourself.

Note that I don’t think you should grind your cinnamon stick. Instead, you’ll want to add it to your curry whole and simply fish it out afterward.

In order to make the flavorful sauce that gives this dish its name, you’ll first start by melting the butter in a pan. Add your cardamom, cloves, cinnamon, and pepper and let the flavors blend together over low heat for a couple minutes. 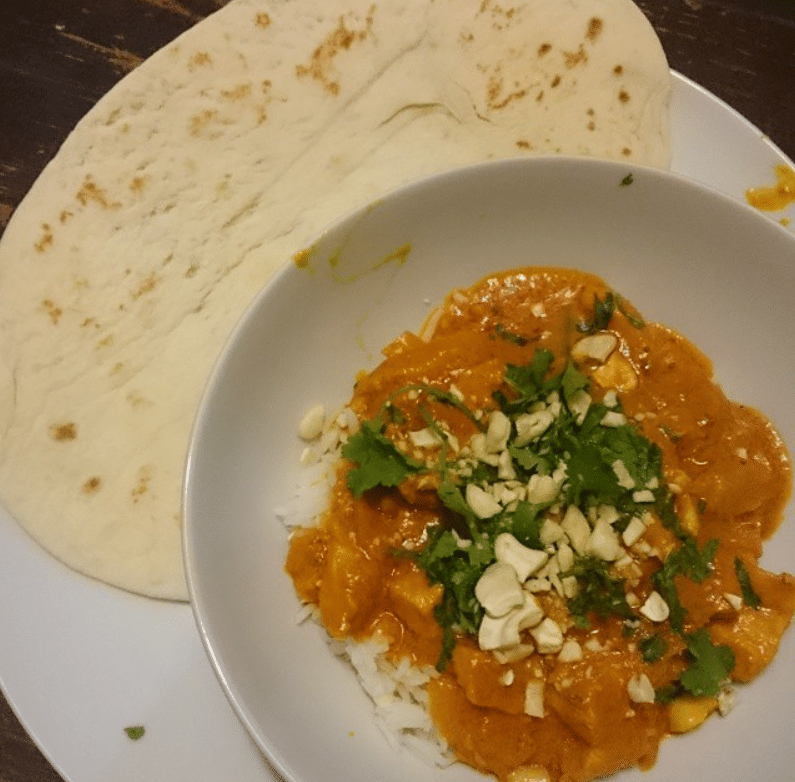 When you’re satisfied that the butter is properly infused, add the ginger and garlic paste and gently stir everything together. Let this cook for another couple minutes and then add the tomato paste, chili powder, and plenty of salt. Don’t stick to the single tablespoon I have listed. Instead, add a bit of salt, stir your curry, and taste it. Add more salt until it tastes perfect.

When everything tastes perfect, add about a half cup of water and let the mixture simmer for about ten minutes. The water is just there to prevent your curry from burning while you let it simmer. At the end of the simmer, add the sugar, celery leaves, and chicken.

Let the penultimate mixture simmer for about five minutes and then stir in your cream (or milk or coconut milk). As soon as your butter chicken is cool enough to eat, serve it to your eager dinner companions. They’ll be sure to love it!

Even if I’m eating by myself, I find that this dish disappears impossibly quickly. If you’re serving ravenous adult guests you can easily double it and wind up with no leftovers. 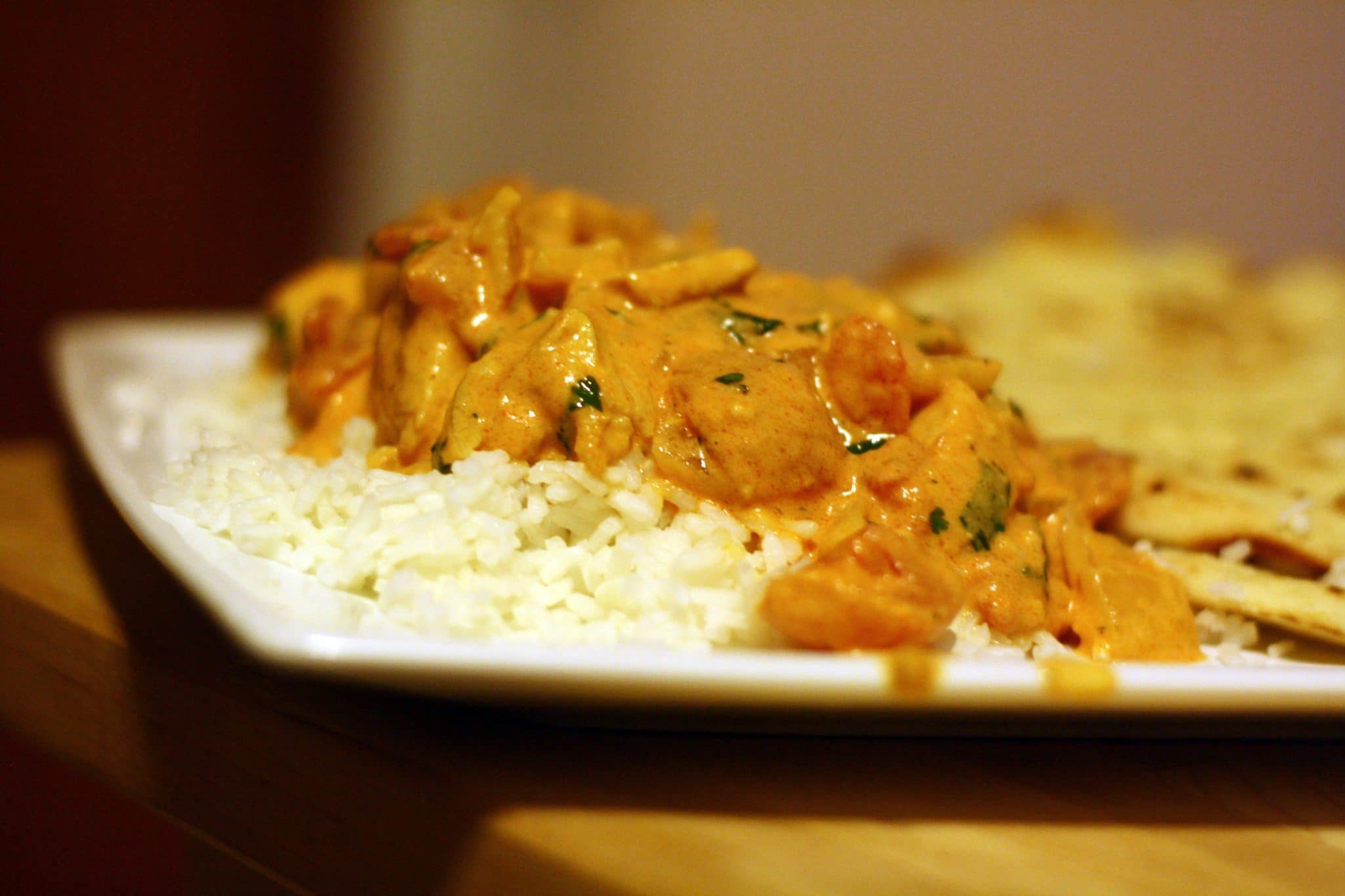 While the above instructions might seem long and complicated, they’re really not. All you’re doing is adding a bunch of delicious flavors to a pan and letting a little bit of heat melt everything together.

The hardest part is definitely waiting for things to simmer. Your kitchen will smell wonderful and you’ll hardly be able to resist calling the dish done and eating it immediately. 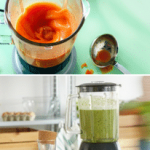 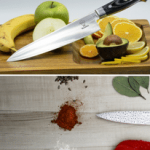