Warning: Use of undefined constant ‘do_shortcode’ - assumed '‘do_shortcode’' (this will throw an Error in a future version of PHP) in /home/customer/www/onthegas.org/public_html/wp-content/themes/yoo_bigeasy_wp/functions.php on line 32
 Chiavetta's Marinade- The BEST Chicken Marinade Recipe

Chiavetta’s Chicken Marinade is popular among the locals of Buffalo, New York, and it’s traditionally used for summer barbeques. Along with the marinade being so popular, Chiavetta’s themselves cater the chicken at state fairs and other local events.

It always leads to the same statement from those residents, however: ‘You haven’t truly lived here if you haven’t had it!’. The marinade can now also be bought on Amazon for people not local to Buffalo to purchase.

In addition, there is also a wide variety of copycat recipes scattered throughout the internet. It is also because fans of the marinade also take a trial and error approach and make judgments on how their recipe tastes compared to the official recipe.

Let’s have a look at some popular recipes: 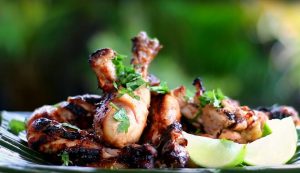 Get your mixer of choice (blender or professional mixer) and start to beat the egg. Continue this while slowly adding oil. Continue beating once more, while adding ¼ of the vinegar, along with the salt, pepper, and poultry seasoning. Add the remaining vinegar and mix thoroughly.

After this is done, baste the mixture onto chicken. If the grill is already on, go ahead and put the chicken on the grill. While on the grill, turn the chicken pieces as often as possible. Put the remaining sauce in a container and refrigerate it.

Grab your mixing bowl of choice and pour in sugar, vinegar, vegetable oil, Worcestershire sauce. Then pour in the garlic salt, onion powder, white pepper, and either the sea or kosher salt. Once all of these are poured into the mixing bowl, then stir thoroughly.

The Background Behind Chiavetta’s Chicken Marinade

Let’s get more into the background behind what people would call a ‘cult favorite’, and how it came to be that way. It originated as Chiavetta’s Catering, by poultry farmer husband and wife Thom and Eleanor Chiavetta.

Thom and Eleanor learned how to make barbecue chicken at the Erie County Home and Farm Center. After their time there learning, they put what they learned into good use. They then started to begin offering catering services, specifically at events like banquets and weddings.

While running the catering business, they also were running their farm, Chiavetta’s Churchside Farms. According to their official website, it mentions that by 1957, they were booming with so much business that it led them to make enough money to buy a brand new food truck, which led them to expand the business.

On that same website, they also mention that by 1980, people were praising the marinade that was put on the chicken, so much so that the company decided to make it, store it in a bottle, and sell it at all the local supermarkets in Buffalo for the public to buy.

It was their most successful business decision, alongside the already existing success behind them, which is what is leading them to be still thriving to this day. Chiavetta’s is, and has been, considered a ‘family-owned and operated’ style business, catering to the famous chicken at events like local state fair Erie County Fair.

Like mentioned earlier, this success also contributed to them selling the marinade on sites like Amazon, which in turn spurred the various ‘copycat’ recipes scattered on the internet.

Different Ways You Can Use the Chiavetta’s Chicken Marinade 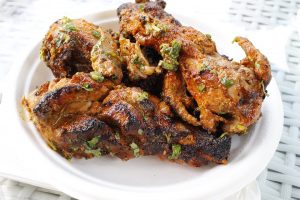 While the marinade is mainly famous for being basted onto the chicken, people are also able to put it to use on other meats, such as beef, steak, lamb, and pork, as mentioned in this listing by a food shipping company that’s also based in Buffalo, Buffalo in a Box.

In the same listing, they suggest that it’s also able to be used on foods like veal, and they also mention that it is universal due to it being a vinegar-based marinade.

There are many recipes scattered throughout the internet, being tailored to the individual and their taste buds, so an official recipe is hard to come by.

The first recipe is for if you’re cooking the chicken on a grill. With that being said, the second recipe is for when it’s being cooked in the oven.

With these recipes, you’re sure to see why Chiavetta’s marinade is widely received in the town it originated from and why it expanded the way it did. It should also be worth mentioning to remember that the chicken with the marinade doesn’t have to be grilled or used in the gathering setting even.

This recipe would work for people who want to try something different with their chicken for dinner, or someone who is generally looking for a new meal that they think the family will enjoy. It should also be worth remembering that the marinade can be used on other meats like beef, pork, and steak as well.