One of my favorite recipes that call for chicken broth is Mexican Tortilla Soup; we all love this flavorful, soul-warming soup filled with tender pieces of white meat chicken, but making it brings up one problem. I think it has been solved by the use of chicken bouillon granules.

Have you ever bought chicken broth, used some in a recipe and then had to throw out the rest because it was spoiled? I have, and I kept wondering if there was a solution to this waste of food. I vary my recipes and often do not use chicken stock more than once a week or at the most, twice a week. I have tried both boxed and canned chicken stock and I still wasted most of the box or can, having it sit in the refrigerator doing nothing until it is thrown out.

I have been looking for chicken bouillon substitutes for a while. My mom used bouillon cubes, and I used them in my early cooking days. Waiting for the cube to dissolve is kind of annoying, especially when you finally have all the ingredients together and ready to go into the pot. With chicken bouillon granules, the problem is now solved. 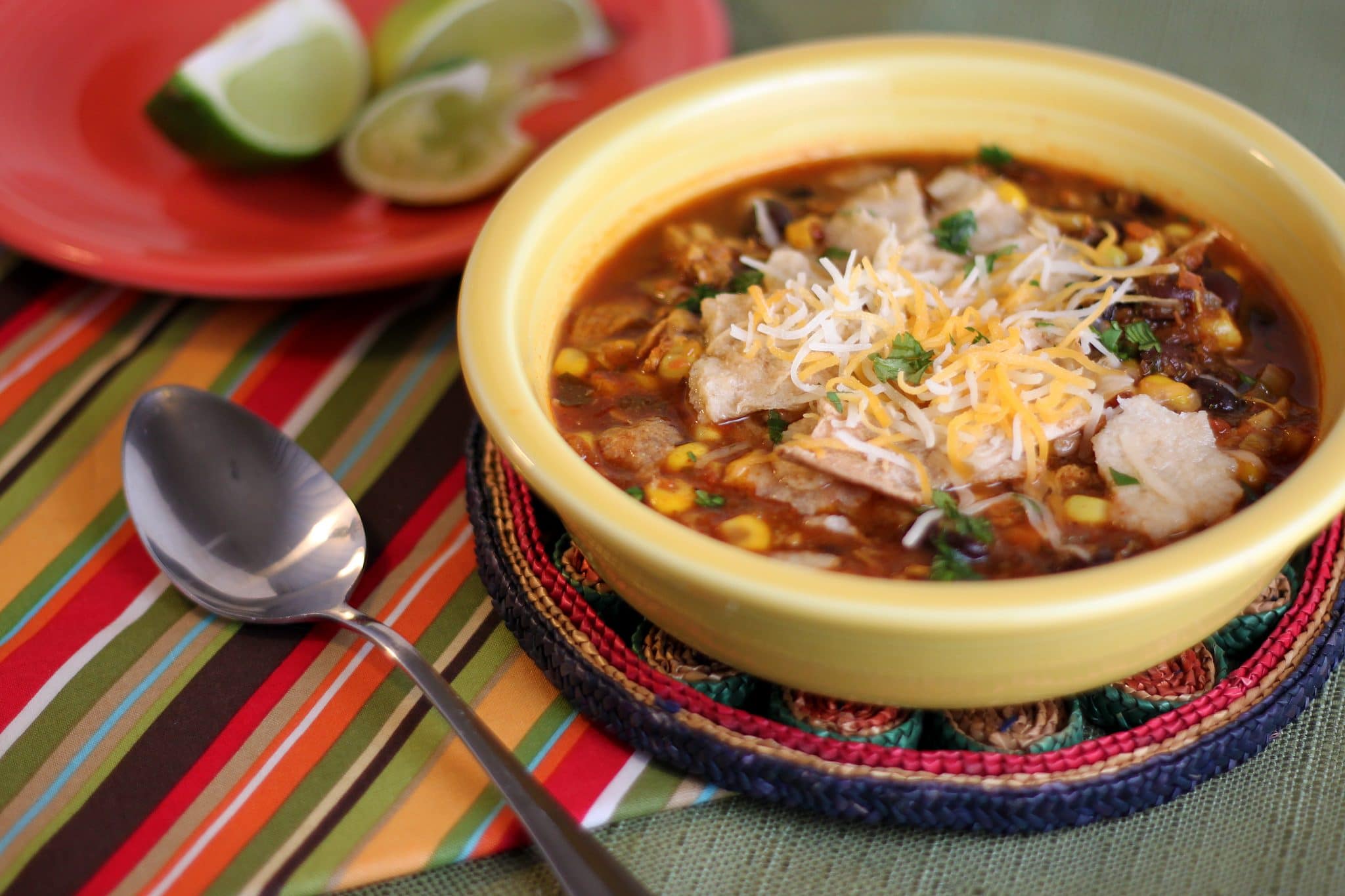 What are chicken granules?

Similar to bouillon cubes, chicken granules come in a small jar and quickly dissolve in water. One jar of Wyler’s chicken granules makes about 30 cups of broth. The best part of using chicken granules is that what is not used can keep well until used in another recipe. As far as chicken bouillon substitutes are concerned, this is my choice.

Some people even drink the dissolved powder as a beverage, especially on cold days or mornings if they are not coffee drinkers. It makes a great broth, and I have been using it my crockpot tortilla soup recipe, which calls for chicken broth. In a taste test of chicken bouillon vs chicken broth, there is really no difference when used in a recipe. Chicken granules make great bouillon, so the chicken broth is ready in a quicker and easier manner with little waste.

Advantages of using chicken bouillon powder in this recipe 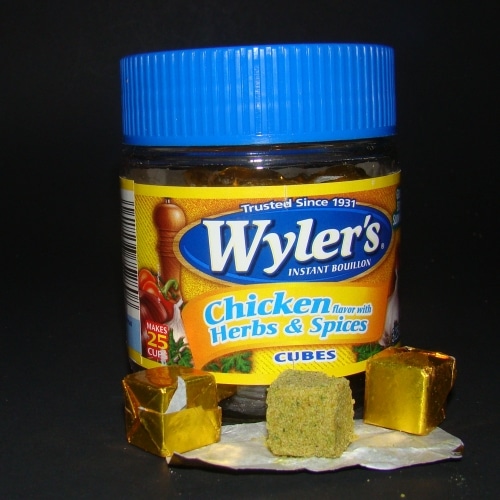 I used the granules ( 1 teaspoon is equal to 1 cube) because I can always add more for additional taste if needed. Some might prefer to use less than a full cube if making a smaller amount; adding more or less with chicken bouillon granules is easy.

I prefer to adjust my recipes to taste. Towards the end of cooking time, I sneak a taste of this delightful dish, even though lifting the lid is not really recommended when doing crockpot cooking. So wait until it is almost finished; then add a bit more of the granules if needed.

Mexican Tortilla Soup in a crockpot

Friends of mine have made this recipe using cooked shredded chicken, as from the supermarket. This will shorten the cooking time but it does not really save on preparation time. I use fresh uncooked chicken and then toss everything in the pot and plug it in.

Toss it all in the cooker and begin to time it. Preparation is quite quick- approximately 15 to 20 minutes. 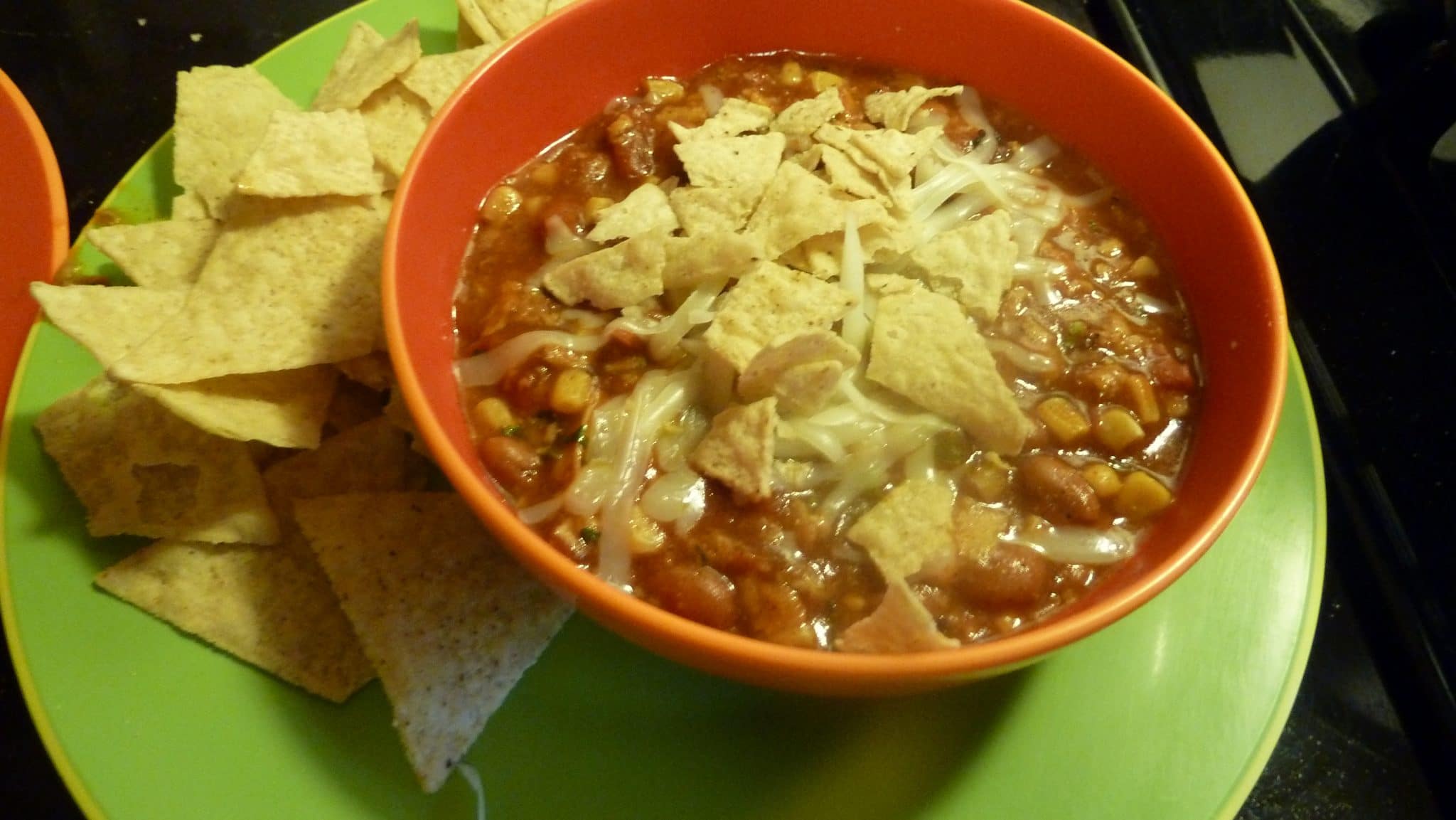 For those of you who like it hot, you can add minced jalapeno peppers to the pot. I find the dish tasty enough, so I avoid the jalapeno, but this is up to you. 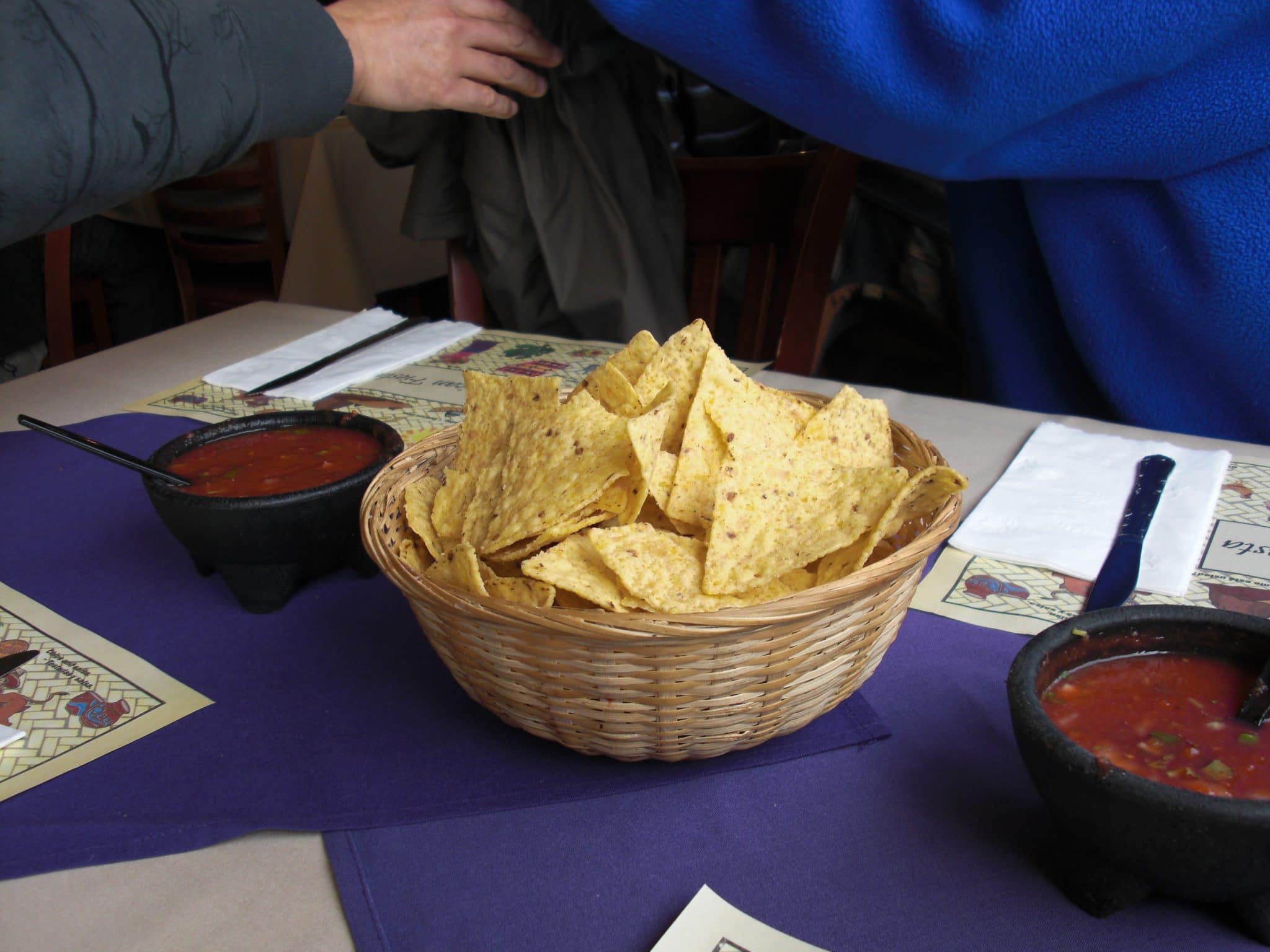 Cooking time on high should be about 6 hours. I have made this dish in 4, using half the quantities suggested. The most important thing is to make sure that the chicken is cooked. When the dish is almost done, open the cooker and shred the chicken with two forks.

For the tortilla pieces as a garnish, I use tortilla chips if I have them. Otherwise, I brush tortillas with oil, cut into strips, and bake the strips at 350 degrees for about 10 minutes. They tend to burn easily, so watch them.

Garnish liberally with the cheddar or Monterey Jack cheese, add a dollop of sour cream and those delicious diced avocado and tomato pieces. Then enjoy this savory meal that was so quick to make. Watch friends and family enjoy your dinner, which took all day to cook!

If you decide to do this dish without using the crock pot method, it can be cooked in one pot on top of the stove. It still does not take a lot of time and will be ready in under an hour, from start to finish. 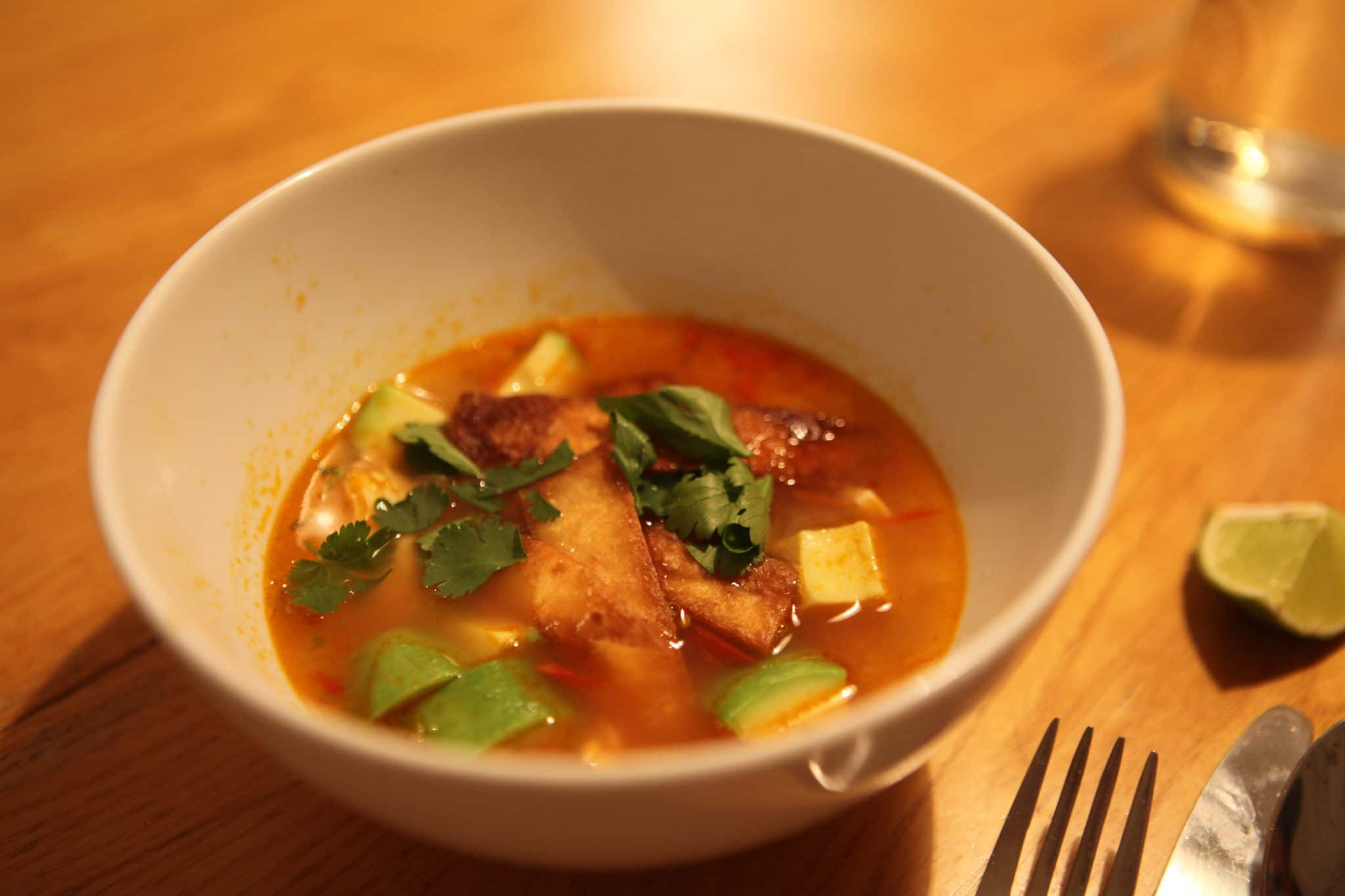 No one really knows where Mexican tortilla soup originated, but it is a favorite throughout the U.S. especially in California where this classic dish is made to resemble the real soup from Mexico. Having lived in California as well as New Mexico, the southwest flavors are part of my soul and making this soup is very comfortable, especially in cooler weather.

Although the origin of this soup is not really known, there is an area in Mexico where Sopa de Lima originated. It is located on the Yucatan Peninsula and is known for its abundant lime trees.

The inclusion of limes in a tortilla-based soup was a way to use all those limes. This Mexican soup called for a chicken stock or broth and chicken. Since soup is an important beginning course in a Mexican meal; it may even be served in some homes twice a day during lunch and the dinner meal.

Numerous chefs have made the Sopa de Lima recipe and claim it is not that different from Mexican Tortilla Soup. Both use crispy tortilla strips and meat that is shredded. In some Mexican households, turkey is used instead of chicken. Although they are not as easy to find in the U.S., parts of this tasty bird will work in the soup as well as chicken.

The crock pot version of Mexican Tortilla Soup is quick and easy, for those who do not want to spend a lot of time cooking this dish. If you work and leave the house, it is certainly a comforting dinner to come home to after a long day. Your home and kitchen will be brimming with wonderful aromas and spicy flavors when you walk in the door. Using the chicken bouillon granules to replace the chicken stock is just one of the shortcuts that I have developed over time.

Making use of store-bought tortilla chips saves the time in the end-step of garnishing. It also allows for scooping up the chicken and other goodies straight into your mouth, along with the tortilla chips on top that have softened.

I found that this dish is great for get-togethers or at-home sports watching in front of the TV. It also makes a good dish to serve to guests as a starter for a Mexican-themed meal. Feel free to adapt this recipe by adding your own other tastes, such as hotter chiles. Provecho!