Warning: Use of undefined constant ‘do_shortcode’ - assumed '‘do_shortcode’' (this will throw an Error in a future version of PHP) in /home/customer/www/onthegas.org/public_html/wp-content/themes/yoo_bigeasy_wp/functions.php on line 32
 ᐅ CHICKEN CHESAPEAKE RECIPE • Easy, Fast, Meaty and Delicious

Everyone loves chicken, and this love for it goes a notch higher when you’re digging into a bowl of chicken Chesapeake. The chicken Chesapeake recipe has been around for a very long while now, but it’s okay if you’re just now hearing about it.

The recipe has two main ingredients—chicken breasts and crab meat. Combined with spices and the baking process, you’re left with an irresistible dish. It is simple to make, and if made the fast way, it only takes about 30 minutes to get ready.

Seafood-stuffed chicken Chesapeake is always a double-meat treat. There’s already the delicious, mouth-watering chicken, and inside is seafood like shrimp or crab. This Chesapeake will be worth making after a long day where all you need is a delightful quick-fix.

Chicken Chesapeake is actually a boneless (and skinless) piece of chicken breast stuffed with crab filling. The crab filling is often referred to as imperial sauce, crab imperial, or Chesapeake sauce.

So what’s the right term?

Imperial sauce is a sauce made basically from egg, mayonnaise, spices, and seasoning—almost always Old Bay seasoning. This imperial sauce becomes crab imperial when crab meat is introduced into the imperial sauce mix and then baked to a golden brown color. 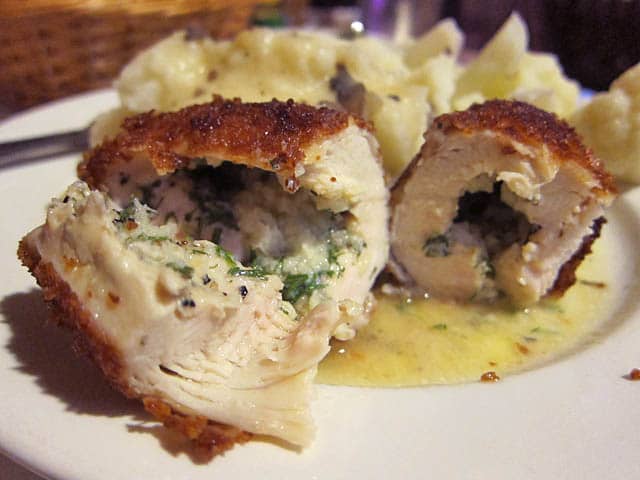 To make a crab imperial, you can use any cut from the crab. Jumbo lump, lump, and backfin crab cuts are the best types of crab meats to use. Others include claw and imitation crab meat. Getting good quality crab meat doesn’t just affect the crab imperial, it also affects the chicken Chesapeake.

For chicken Chesapeake, both imperial crab and imperial sauce can be used. That means that you can either bake your imperial sauce with crab first (see recipe below) or you can bake it along with your chicken breast.

How To Make Chicken Chesapeake

Making this baked dish is definitely not complex. As a matter of fact, it is extremely easy to make and doesn’t take so much time to get ready. There are quite a number of variations existing for the dish. The spices used might vary, but there are definitely certain elements in common. In general, there are a lot of optional ingredients.

For example, cheese wasn’t considered an ingredient in the past, but eventually, it became one version of the standard. Some people add cheddar, parmesan, or cream cheese to their chicken stuffed with crab.

As already mentioned, the recipe for this dish varies from one person to another. The difference is not just in the ingredient list; it also comes down to the method of cooking. Generally, the constants are crab meat, chicken breasts, crab imperial or imperial sauce as filling, spices, and seafood seasoning (preferably, Old Bay seasoning).

To some people, Old Bay seasoning is just as important as the crab meat and chicken breasts. Some consider the recipe incomplete without it, and you can’t actually blame them for that—this seasoning is awesome.

Note #1: The crab imperial does not necessarily have to be baked first before it can be used as stuffing (as shown in the recipe above). The chicken Chesapeake sauce, being imperial sauce, can be stuffed into the chicken breasts and subsequently baked together with it. This saves you time since the total baking time is about 25 to 30 minutes. So yeah, you can go with this method by skipping steps 5 and 6 in the recipe above.

Note #2: You can make the chicken breasts more flavorful. The simplest way to do this is to marinate the chicken in a mixture of white wine and extra virgin olive oil EVOO. Keep it in the refrigerator until you’re done making the crab imperial. Or, you can pour melted butter over your stuffed breasts. 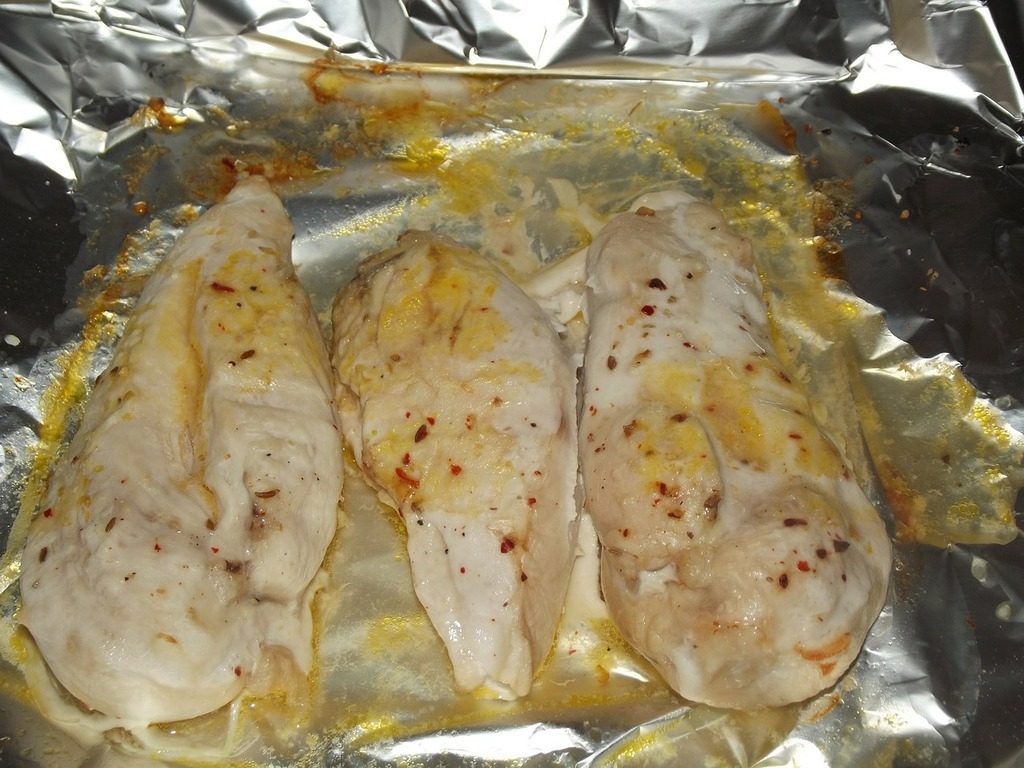 Note #3: Breadcrumbs or crushed saltine crackers can work as a coating. Also, you can let the chicken breasts cook in a skillet with melted butter before transferring them to the oven for just 10 minutes. Instead of a skillet, you could grill them before baking, for about 5 to 10 minutes.

Note #4: On the type of meats to use—use jumbo lump or lump for the crabmeat. For chicken breast, use an organic, free-range chicken breast. The breasts should be tenderized and thick enough to accommodate a filling, lest the filling bulges out. I definitely do not recommend imitation crab meat for this recipe. Just in case you didn’t know, most of them are Alaskan pollock.

Note #5: Using the crab imperial as a topping, rather than as a stuffing, is one variation. In situations where you’ve got more crab imperial sauce than chicken breasts and stuffing will yield way too much excess, then, by all means, top it up.

Note #6: You can make the crab imperial ahead of time, just cover it up and refrigerate. Oh, and experiment! Try a new ingredient, like wrapping up the chicken Chesapeake with imperial sauce and smoked ham. Do anything; just be creative.

What To Do With Leftovers 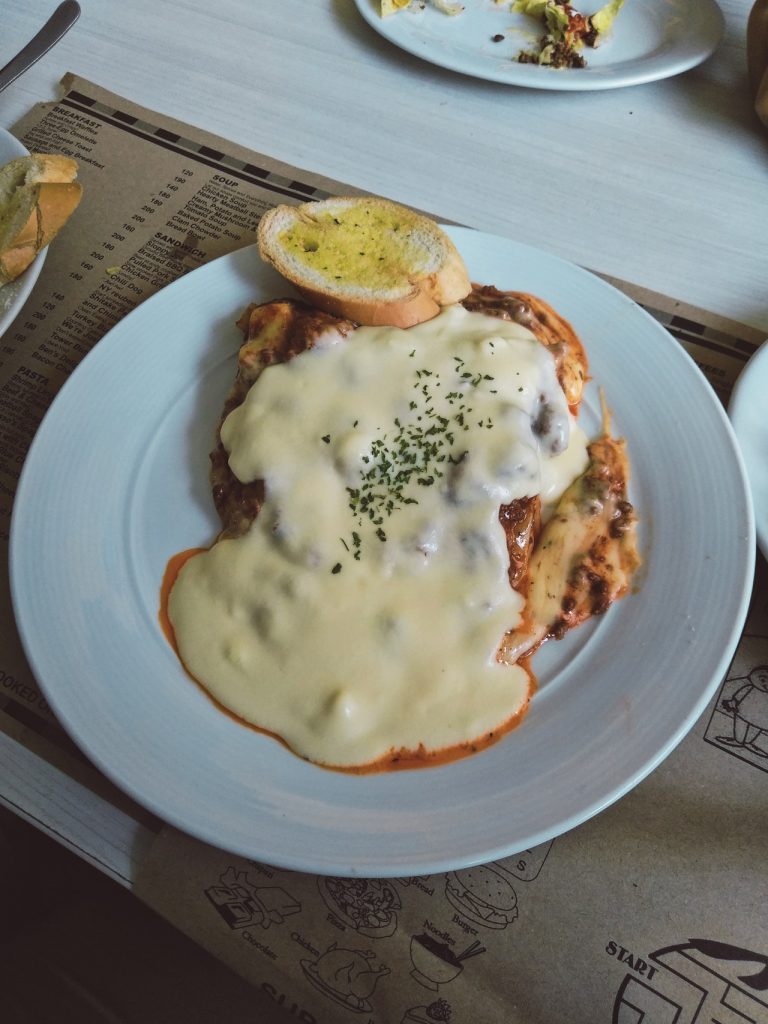 Though this most likely won’t happen, you might end up with excess chicken breasts. Well, that’s easier to deal with, and there are a lot of dishes to try out that require chicken.

You can choose to pair your leftovers with side dishes. Garlic bread, for example, is an excellent choice. And then there’s plain rice, French fries, salads, couscous, mashed potatoes, rice pilaf, soup, orzo, green vegetables, and anything else you are thinking of right now. Trust me, there’s no one way of eating your Chesapeake. It’s all about a creamy-based crab stuffed in chicken which is flavorful, moist, and delicious.

Following the chicken Chesapeake recipe up above will guide you toward a spiced, nicely-balanced dish. You can make plans to marinate the breasts first before stuffing and baking them. Personalizing the recipe to fit your own favorite cravings such as bacon, Tabasco sauce, or parmesan cheese, is also an awesome experience. You get to have fun while cooking and feel blessed while eating.