Cîroc – just the name itself with it’s weirdly accented “i” is enough to clue you in that Ciroc is not your average store-brand vodka. Since it was introduced in 2002, Ciroc has positioned itself to be a direct alternative to other brands of vodka, primarily due to the fact that it is made out of grapes instead of wheat (that traditional vodka is made out of).
Due to its origins, Ciroc has a very light, aromatic, and citrusy flavor that lends itself well to fruit cocktails and other sorts of sweet alcoholic drinks. In addition to this, Ciroc is also great in baked desserts!

Here are a few yummy recipes that you can try out at home: 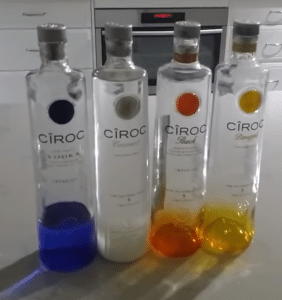 1. Prepare the oven by preheating it to 350 degrees Fahrenheit.

2. Prepare the cake mix by following the directions on the box. However, instead of using water, replace it with the Ciroc Peach Vodka. The ratio of water to vodka is up to you. If the cake mix recipe calls for a cup and a half of water, you can use a cup of vodka and a half cup of water. Just make sure that you’re using the right amount of liquids so that your cupcakes won’t turn out too dry.

3. Mix the cake batter well. Get a lined cupcake pan, and use an ice cream scoop to fill each cup in the pan. The cup should be filled about three quarters full of batter (Note: the extra space is to account for the batter expanding during the cooking process). Cook for about sixteen to twenty minutes. To test for doneness, you can insert a toothpick into a cupcake. If it comes out clean, then it’s already done.

4. Prepare your buttercream frosting by simply whipping your butter with a shot of Ciroc Peach Vodka, three tablespoons of peach juice, and confectioner’s sugar. Aim for a consistency that is light and fluffy, with an off-white cream color.

5. Take the cupcakes out from the pan and place them on a wire rack to cool. Once they are completely cool, garnish and decorate them with the buttercream frosting and the peach slices. (Decoration idea: spread a tablespoon of frosting on top of the cupcakes, and top it with a couple of peach slices).

1. In a large pot, add in the canned sliced peaches (including their syrup), with butter, nutmeg, cinnamon, and sugar. Turn the heat to medium and cook for a few minutes until hot. Finally, add in the lemon juice and vanilla extract then stir.

2. Take out a cup of the peach syrup filling, sprinkle in the cornstarch, mix well, and pour it back again into the pan with the rest of the liquid. Keep on cooking and stirring the liquid until it thickens. Once thick, pour in the Ciroc Peach Vodka and stir well. Remove the pot from the heat after a couple of minutes. 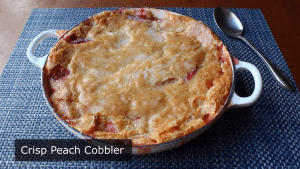 3. In a bake dish, spoon out about half of the peach filling, spread evenly, then add a layer of cake mix on top of it (about a cup and a half should do it). Add four tablespoons of butter on the cobbler mixture.

4. Bake the cobbler in the oven until the crust has a nice golden brown color. Let it cool until it is safe to eat. Transfer to another plate or container.

5. Repeat the steps above for the remaining cobbler mixture and filling.

While Ciroc might not be the vodka that most people are used to, you can still give it a try in your drinks and recipes. Hopefully, the recipes above gave you an idea on how to use it in desserts.