Have you ever wanted to make potato dauphinoise without cream? There are a plethora of reasons why someone might want to omit the cream from this delicious gratin-style recipe, but how do you go about doing it? I am a big fan of this French recipe, but as I know a few good friends that are lactose-intolerant, I like to make up this tasty side without some of the dairy.

In the traditional recipe, potatoes dauphinoise uses heavy cream, and the result is a very rich dish that really blends well with lean meat or even poultry. With that said, healthy dauphinoise potatoes could really do without all of the extra fat that comes with the addition of this thick dairy product.

In fact, if you’re a vegan or a vegetarian or are serving those types of folk, omitting the milk-based components can really open up options when you’re searching for an accompanying side dish. In this guide, I’m going to present you with some of my favorite dauphinoise potatoes no cream recipes. 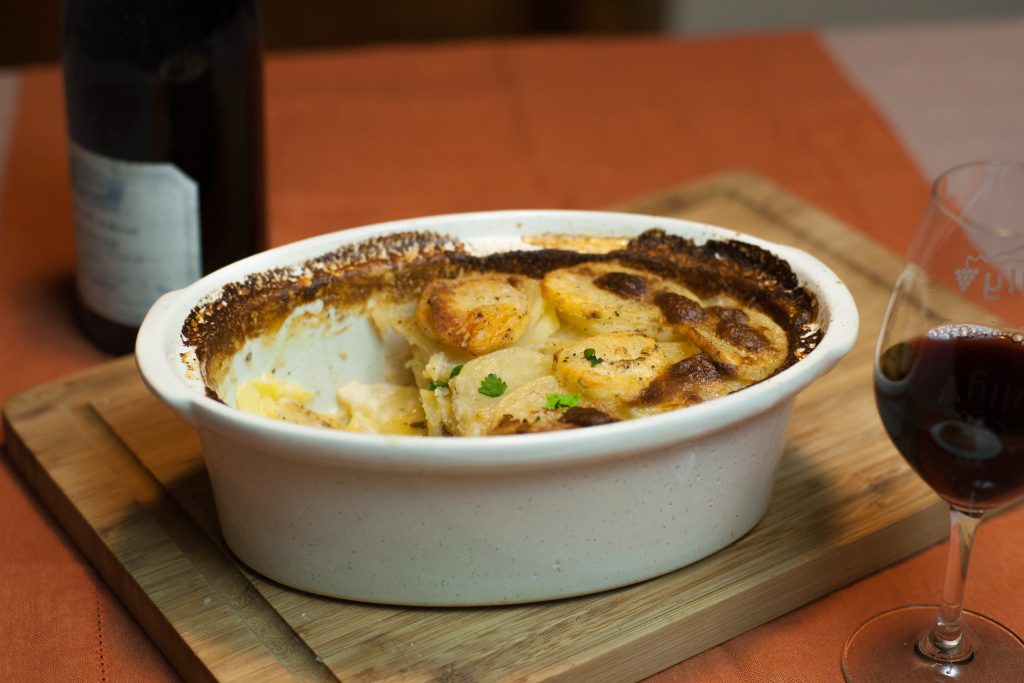 What’s the Difference Between Au Gratin and Dauphinoise Potatoes?

If you like your potatoes creamy, then the French have you covered! Even though this is a guide on making your dauphinoise cream-free, both of these recipes were designed for a palate that loves creaminess, but there are definitely more than subtle differences between both of these recipes:

If you’re looking to make low-fat dauphinoise potatoes that aren’t necessarily dairy-free, I’ve got you covered. This recipe incorporates some cheese, which partially takes the place of the creaminess that you’d expect from the standard recipe.

Still, the cheese I use here is a lower fat cheese, which can make you feel significantly less guilty when you’re counting your calories for the day.

To start, you should preheat your oven to a fairly high temperature – I find around 425 degrees Fahrenheit to be good for the recipe. Typically, I allow the oven to preheat for at least five minutes before I put in the dish.

Grab a shallow baking dish, and using a paper towel, oil the bottom of the dish with olive oil until it has a sheen over its surface. Next, using a spoon, rub the base of the dish with the minced garlic. Apply pressure so that the flavor of the garlic melds somewhat with the oil coating. This will really enhance the flavor of the dauphinoise. Once rubbed into the base of the dish, you should remove all the minced garlic. 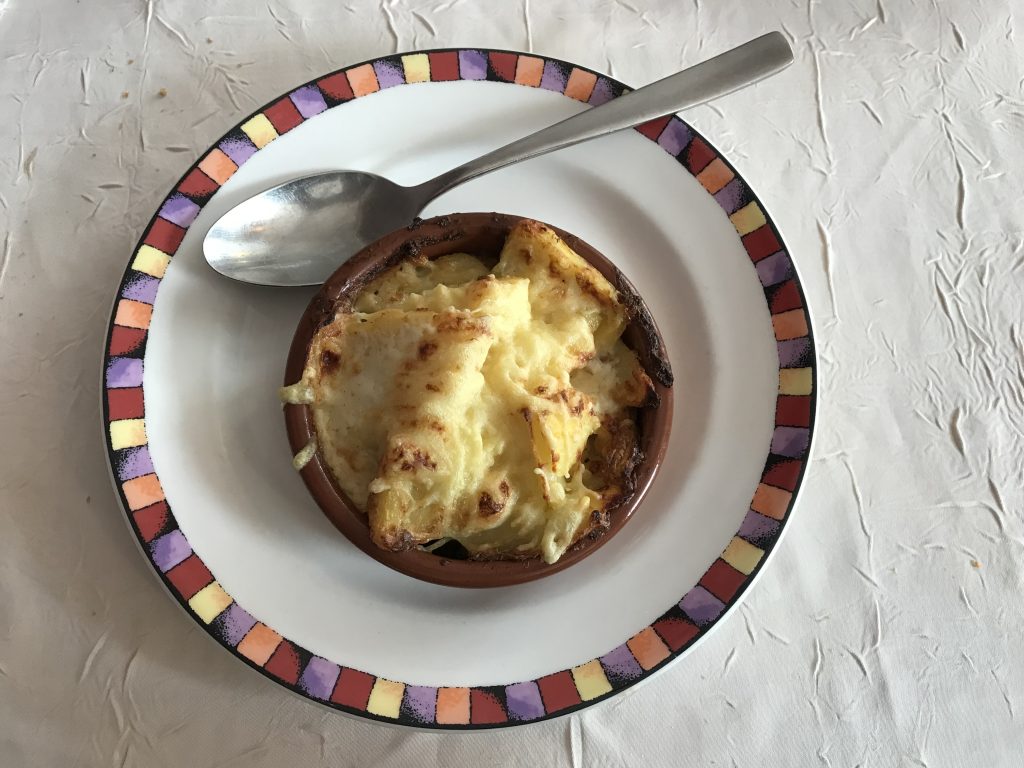 Since we’re substituting gruyere for the cream, we’ll be creating cheesy layers. To start on the preparation process, slice the potatoes until they are moderately thick; for the most part, I usually cut mine so that they are anywhere between an eighth to a quarter-inch thick.

In a large bowl, combine the melted fat-free butter, the salt and pepper, the minced garlic from before, and the potatoes. Stir it around until they potatoes are well-coated. With about a third of the potatoes, coat the bottom of the dish. After there is a nice layer, place a thin layer of gruyere. Repeat by adding another layer of potatoes and gruyere, and repeat one more time until you have no more of either.

Next, grab the milk, bay leaf, and thyme to a boil. Pour this milk mixture over the potatoes, which should melt the cheese. For this step, it’s important to get as much coverage as possible so that the seasoning on the potatoes blends well and the cheese becomes incorporated into the other liquids of the dish.

Cover the dish in aluminum foil and bake at 425 degrees Fahrenheit for about 40 minutes. You’ll be able to tell it’s mostly done when you can peel back the aluminum foil and determine that the potatoes have become tender in the sauce by poking them with a fork. Once it’s reached this stage, remove the foil completely and allow it to bake for another 10 minutes so that the dauphinoise becomes browned on top.

Remove the baking dish from the oven and let it sit for about five minutes and serve. For me, this is a great cream-free dauphinoise that tastes more like traditional dauphinoise due to the use of creamy-tasting gruyere. You can try other cheeses if you like, but some may make the recipe taste a bit more like au gratin potatoes.

How to Make Vegan Dauphinoise Potatoes

Okay, so that last recipe might not work for those looking to have diets without any animal by-products. In this situation, there are alternatives that are completely dairy-free. This recipe perfectly mimics the creaminess of traditional dauphinoise without any milk or cream. A bonus for this dish is that it uses nutritional yeast and other healthy ingredients, so this is one that will also be good for you! 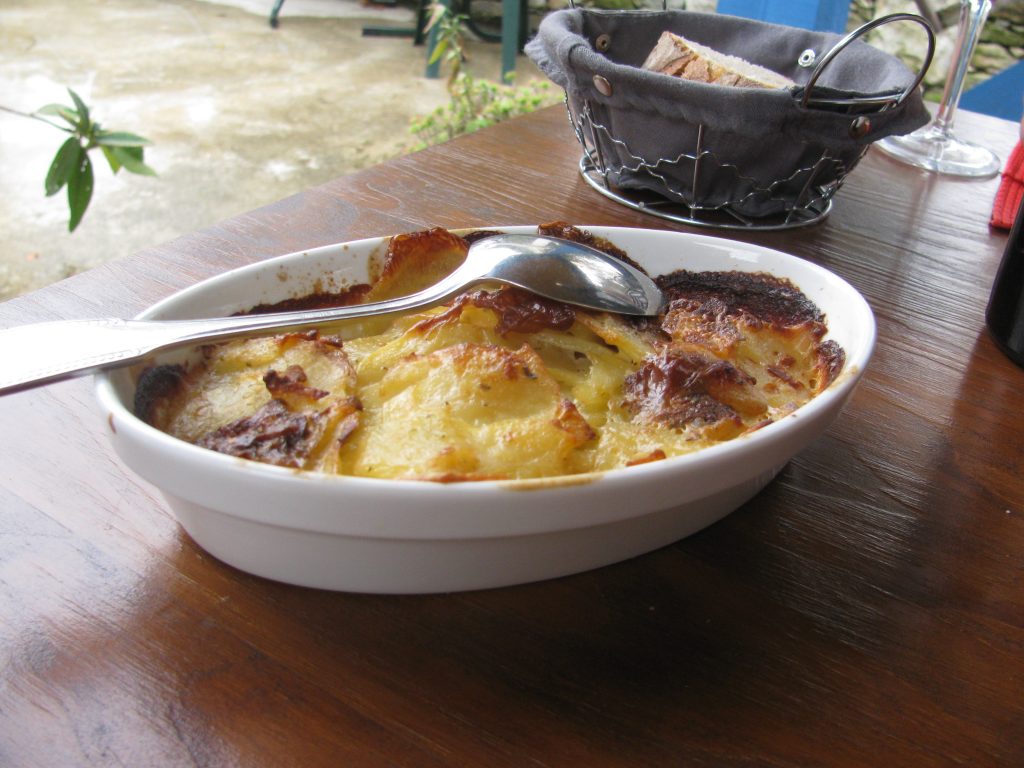 For this recipe, you don’t need an oven that’s heated to a high level; in fact, preheating your oven to 350 degrees Fahrenheit for about five minutes should do the job. Start by slicing the potatoes so that they are anywhere between an eighth to a quarter-inch thick. Next, place the potatoes inside of a large baking dish. 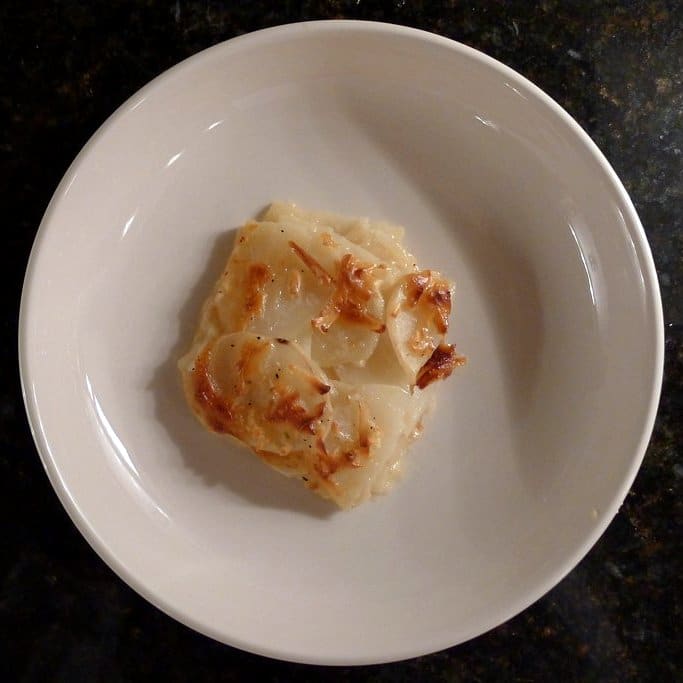 In a skillet, sauté the onions in olive oil for about two minutes or until they become translucent and have browned slightly at the tips. In a bowl, pour all of the almond milk and add cornstarch and mix well until the cornstarch is completely dissolved. In a large saucepan, pour in the almond milk mixture, the nutritional yeast, the cube of veggie stock, and the salt and pepper and bring to a boil. Once you see bubbles, reduce heat to low and simmer.

While it’s simmering, stir continuously; the mixture should start to thicken significantly. Once it’s creamy, pour the mixture on top of the potatoes and cover the baking dish with aluminum foil. Transfer the dish to the oven and bake the dauphinoise for about a half hour.

Like the previous recipe, test the potatoes for consistency using a fork, then remove the aluminum foil and bake for an additional 15 minutes in the oven. This will allow the potatoes to brown on top and form a crust. Serve after it’s cooled for about five minutes.

How to Make Quick Dauphinoise Potatoes without Cream

If you know what you’re doing, you can cut down on the prep time for dauphinoise potatoes by using the saucepan to thicken the sauce. Let’s take a look at one such method:

Preheat the oven to 350 degrees Fahrenheit. Slice the potatoes until they are about ¼ of an inch thick or slightly smaller. To prevent browning, you can rinse the potatoes in cold water. Next, in a large saucepan, pour in the milk, garlic, and cornstarch in a pan and bring to a simmer. Gradually, it should start to thicken somewhat. After about two minutes simmering, place the sliced potatoes into the mixture, and let it simmer for an additional 10 minutes. You should be able to tell the potatoes are ready when they are tender.

After this simmering stage, transfer the potatoes to a buttered baking pan or ovenproof dish. At this point, you can just bake these potatoes for about 25 minutes and serve.

If you’re a fan of French cooking like me, these delicious dauphinoise potatoes are guaranteed to provide you with a lot of dining satisfaction. In fact, I’ve even had nights where I’ve eaten this recipe as something of a main course, which is much easier to accept when you’ve cut some of the calories by using some of the low-fat dauphinoise potatoes recipes that I’ve selected for this guide.

Dauphinoise potatoes without cream doesn’t mean that you have to sacrifice flavor; each of the recipes that I selected is loaded with flavor, so give them a try the next time you’re cooking. 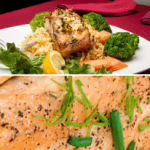 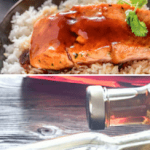 Delicious Rice Vinegar Recipes You Can Try at Home