When my good friend invited me to their wedding up in Canada awhile back, I knew I had to seize the opportunity to get a taste of the famous donair I’ve read so much about; not just any donair, but the Halifax donair in particular.

Asking him where I could find some good donair, I got as an answer a popular pizza place called “King of Donair.” Apparently their donair recipe is the best, so of course I had to try it. I can still remember when the moment of truth arrived, that donair dripping with garlicky sauce just sitting right in front of me.

After the first bite, I had to stop. Want to know why? I just couldn’t process all that awesomeness all at once. I had to pause because that’s simply how amazing it was. It was unlike anything I had ever tasted before and everything I had always imagined it would be: way better than shawarma’s and pizzas put together. The taste of the sauce was simply out of this world.

Anyways, while I was seriously munching on the delicious donair, I knew there was no way this was going to be the last time I would be eating the donair. Trouble was, I had no idea when I would return to Canada again; in fact, I still haven’t returned since this trip. Armed with this foresight, I took maximum advantage of this opportunity and learned about the donair recipe before my return flight.

Today I will be introducing you to everything you need to know about the Halifax donair.

At this point you’re probably wondering what donair is. The answer: it is a sweet, savory and tasty snack for those that really enjoy eating meat. It consists of donair meat, which is a very spicy ground beef that has a sort of loaf like shape roasted on a spit singed on a level top. The meat is beef that has been seasoned with numerous spices; it is cooked on a spinning grill to get the best out of it. The meat is then placed on a very thin pita (Lebanese style) and topped with lots of diced tomatoes, onion and mozzarella cheese.

Secondly, there’s the donair sauce, the most unique part of this dish. It is a combination of the perfect blend of evaporated milk, vinegar, powder, sugar and most importantly garlic.

The donair snack is usually wrapped in tin aluminum foil, as the pita soaks up the sauces and tends to fall apart. The sauce is garlicky and deliciously sweet; it is often used as a dipping sauce for other snacks like pizza crusts.

Although there have been claims by Nova Scotia (popularly known as the “King of Donair”) that they made the first ever donair, the history books say otherwise. According to history books, it is said that a Greek man who migrated to Canada set up an eatery that served his traditional country food. It was quite successful, but not as successful as he was hoping.

So, he decided to add the good old traditional Canadian wrap to his menu. He used beef for meat including some popular spices and the now famous delicious garlic sauce. Voila: donair was born. It was something the Canadian Maritimers just couldn’t seem to get enough. Preparing donair meat from home is quite simple and if you don’t have a meat grill, no need to panic; there are other alternatives.

Basically you just need to add the required spices for the recipe to the lean ground beef with some panko bread crumbs and form a sort of closely packed oval-shaped loaf and oven bake using a broiler pan at a temperature of 3000F for at least 2 hours. Ensure the loaf cooks properly for this length of time so you can get a taste closer to the original donair.

After cooking the meat, allow it to cool overnight in the refrigerator as this enables you easily cut the meat into thin slices and also portion everything out. This also allows the flavor to further soak in the meat giving it that perfect donair taste.

This recipe I will be showing you is one I have always used when making donair. I have worked on it numerous times to ensure I get that authentic Halifax donair sandwich taste. So far, so good, if I do say so myself!

This recipe makes enough for six persons. To prepare you will need the following ingredients:

For the donair meat

To assemble donairs, you will need:

First things first, pre-heat the oven to a temperature of about 300 degrees F.

Combine all donair ingredients except for the beef and mix thoroughly using a stand mixer. Mix for well over 10 minutes.

Once that is done, form the meat into a closely packed oval-shaped loaf and gently place the loaf on a broiler pan and allow to cook in the oven for 2 hours and 30 minutes. When the meat is thoroughly cooked, allow it to cool overnight in the refrigerator. This enables you to easily cut the loaf into thin slices.

Note: you can try using chicken for the donair as it is a perfect alternative to the beef donair.

The sauce plays an important role in giving the donair its unique taste. To prepare it, you just need to simply add the evaporated milk, sugar and garlic powder in a bowl (preferably of medium size) and mix thoroughly. Add the vinegar 1 teaspoon at a time to the mixture until it thickens to how you want it.

This is quite easy; simply take a good portion of the donair meat and heat it up in a pan with a small quantity of oil in it and heat over low-medium heat. Ensure the meat is not too brown when heating.

While the beef is being heated up in the pan, take the pita and soak it a little with some water. Once you have soaked the pita, place it gently over the meat while it cooking. Allow it steam for at least a minute and flip it over to the other side and allow it to steam again for another minute. 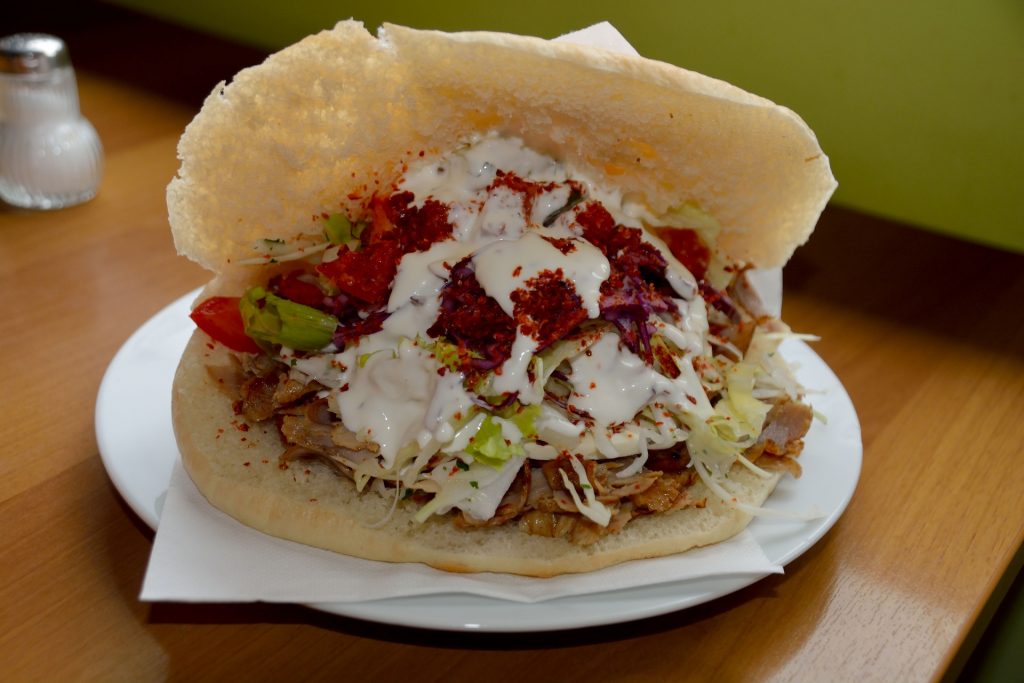 Once the pita is steamed enough, place it on a square-shaped aluminum foil and top it with the donair meat and the other spices, then add the donair sauce.

Roll up the pita and fold up its bottom. Carefully wrap it up with the aluminum foil and place it in an oven for at least 10 minutes to warm. Ensure you set the oven temperature to 350 degrees F. Repeat these for as many donairs as you intend to make.

Peel off the aluminum foil and munch on your donair. Ensure you have lots of napkins as donair can get pretty messy!

Donair is definitely a snack you should try. With everything that has been said about the donair recipe and its preparation, I don’t see anything holding you back. Make some donair and give your taste buds a real treat.