Warning: Use of undefined constant ‘do_shortcode’ - assumed '‘do_shortcode’' (this will throw an Error in a future version of PHP) in /home/customer/www/onthegas.org/public_html/wp-content/themes/yoo_bigeasy_wp/functions.php on line 32
 FLAT MEAT: The Butcher's Secret

Have you ever considered using flap meat in your cooking? While you may have some reservations, take a second and read on – I can guarantee that this delicious cut of meat will surprise you with its delectableness.

Good flap steak is one of the more versatile cuts of meat that you can find at your local butchers, and in my opinion, it’s kind of a well-kept secret that only the butcher and a few select in-the-know grillers truly understand. This part of the steak comes from the bottom sirloin butt cut of beef, and it’s often cut super thin.

In some parts of the nation they call this the sirloin tip, and this is a pretty good description for this flat meat cut. Throughout the country, this versatile cut of meat is used for a myriad of dishes; in fact, it can even be used to make a truly special burger if you own a good grinder. This cut is also spectacularly grill-friendly – I usually will buy a few pounds of flap steak when I want to grill out on the cheap because this cut of meat doesn’t tend to cost a whole lot of dough.

Having mentioned all of this, not everyone understands the ins and outs of cooking flap meat, which is why I created this handy guide. 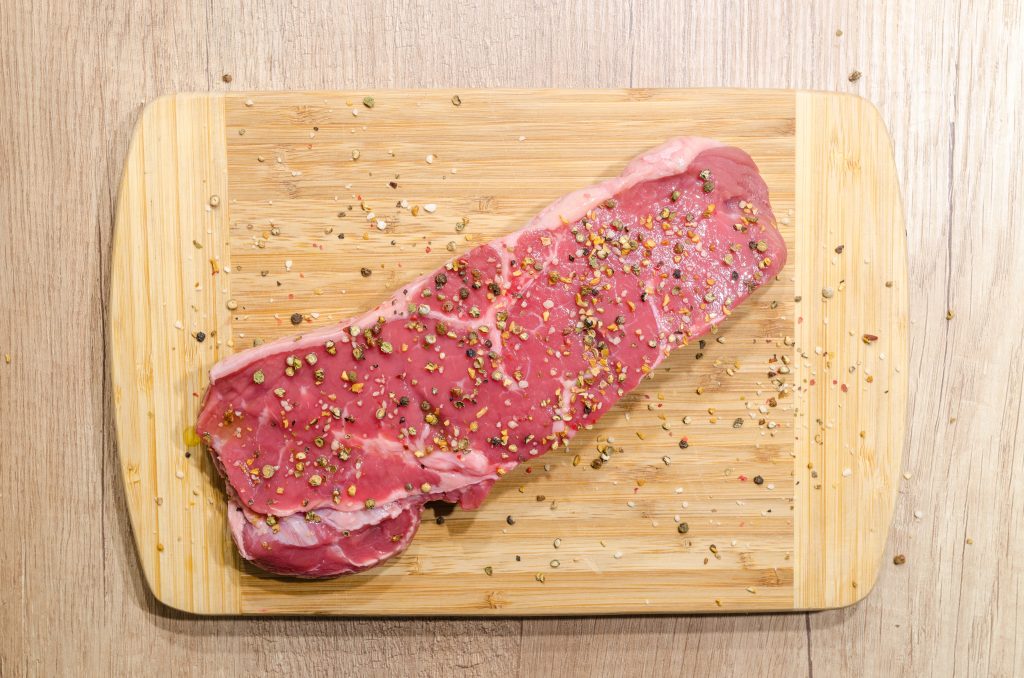 What is Flat Meat?

Flat meat, which is the colloquial description that many use for flap steaks or sirloin tips, comes directly from the internus abdominis muscle that is positioned around the bottom sirloin butt of the cow. This part of the meat has a chewier texture and usually can be bought fairly inexpensively from your local butcher or supermarket.

Additionally, many chefs, myself included, like to marinate this cut of meat because it takes on the flavor of a good marinade, so before you go out to grill, soak your meat overnight for a truly exciting experience. A little later in the guide, I’m going to show you one of my favorite marinated flap beef recipes.

The Difference Between Skirt and Flap Steak

Believe it or not, a good cut of flap meat isn’t quite the same as skirt steak, even though there is a common misconception that these are the same cut of meat. Skirt steak is the go-to steak cut for fajitas, and if you’ve ever been to an authentic Mexican joint, then most likely you’re very familiar with this seemingly flat meat. That being said, this steak is only tangentially similar to flat steak, so let’s take a look at the differences. 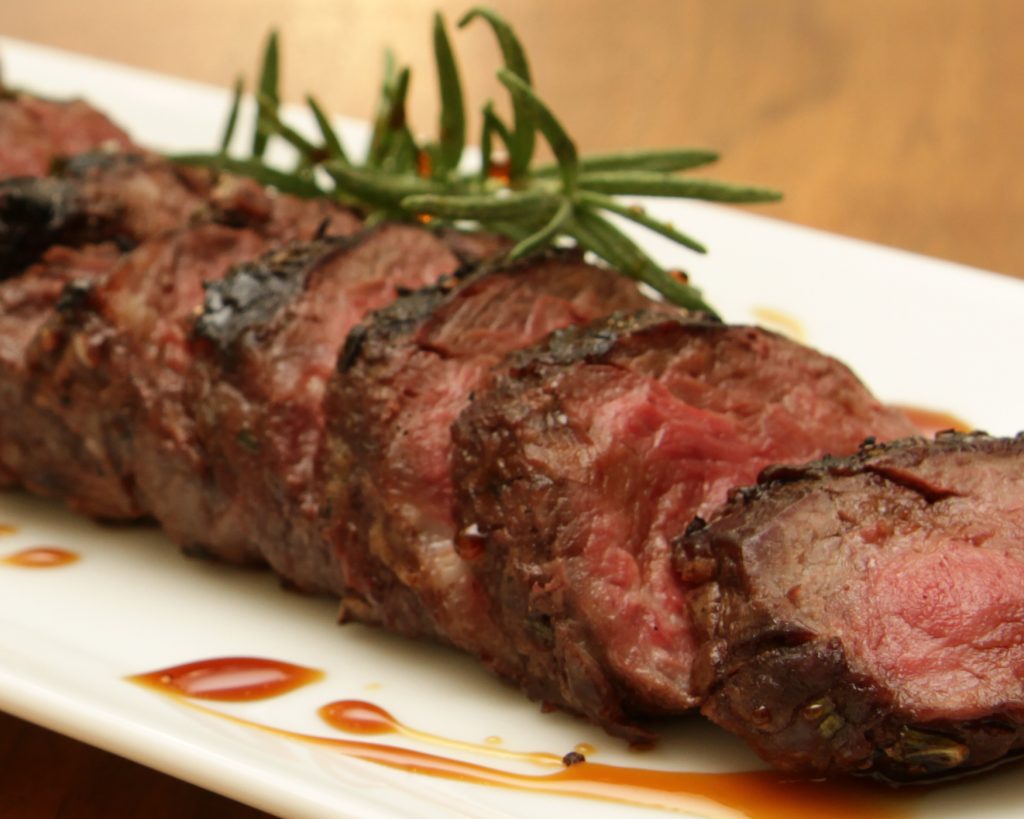 When the butcher is sourcing this part of the cow, he cuts thin and long cuts from the diaphragm area of the animal. As a result, much of this part of the beef has more than a few tough fibers.

This is also a cut that has quite a bit of fat so that you can expect more of a beefy flavor from the skirt steak portion. As a result, I seldom cook my skirt steaks any deeper than medium rare because if you cook it too long, there’s a tendency for this cut of beef to run a bit extra chewy.

Like flap meats, this type of steak benefits from marinades. If you want it to cook longer, you can avoid the tough and chewiness by slow cooking it for a few hours. Making fajitas? Throw this meat on the grill for a few minutes per side or sear it in a pan for a very short period and you’re good.

This part of the animal more closely resembles rib eye steak, and it has a far lower fat content than you would find in the skirt steak part of the beef. This is primarily because this part of the meat is harvested from a more muscular part of the cow. This type of meat can certainly be used for dishes like fajitas, and it’s very popular in Asian and French cuisine as well. 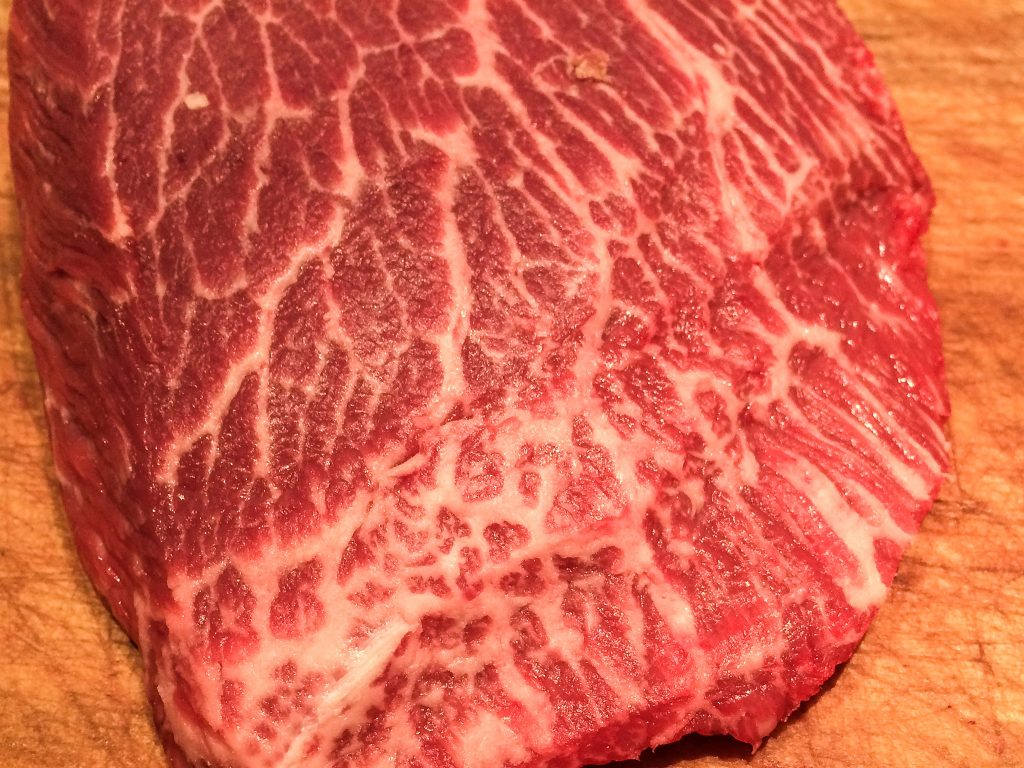 In most situations, I tend to cook my flap over high and dry heat, which ensures that it doesn’t get too tough, too fast. Having mentioned that, this steak doesn’t suffer from being cooked deeper than medium rare as skirt steaks do, so feel free to broil, pan fry, or stir-fry them without worrying about too chewy a texture.

The flap part of the cow is considered part of the short loin section of the animal, and in my opinion, this is a cut of meat that is a bit more versatile than the skirt cut.

Some people call this faux hanger steak because it has some very similar attributes to hanger steak, but if you want to optimize this unique cut, you should know how to prepare it like a pro. 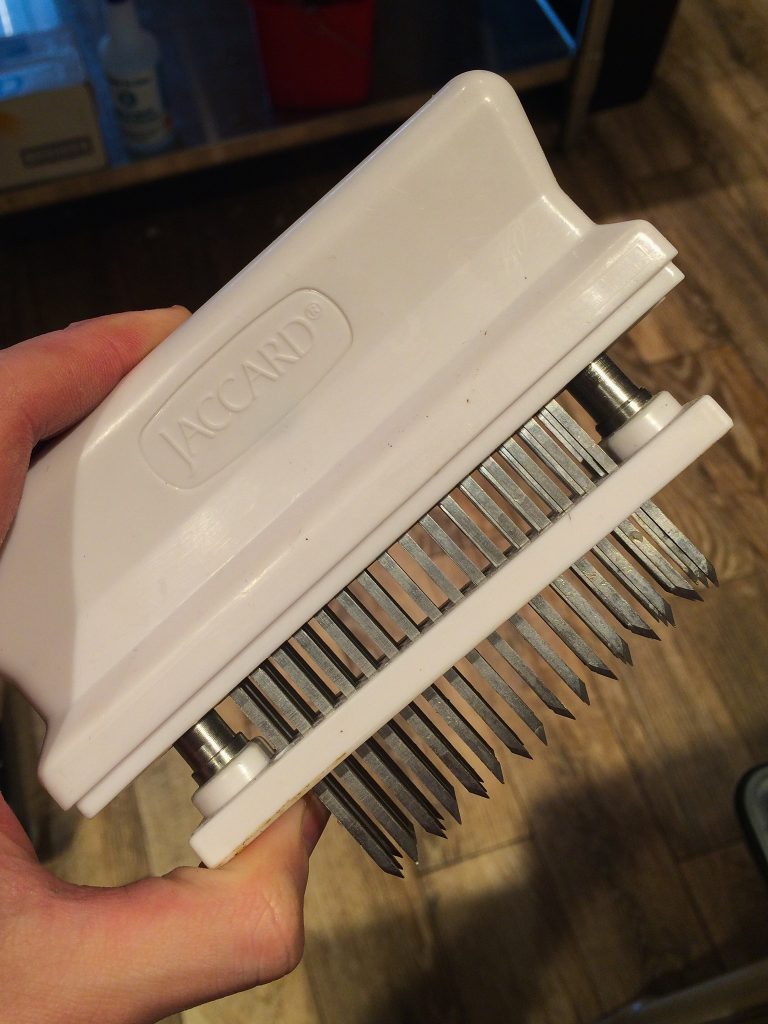 Using one of these amazing inventions is something of a best-kept secret among chefs and top-tier grillers. While the Jaccard is often referred to as a “knife,” it really doesn’t do much in the way of cutting.

The Jaccard is an invention that has several thin needle-like pokers that are designed specifically to perforate into the meat. This perforation also breaks down the muscle tendons of the flap, which means that you end up with a fillet mignon-like meat once you’ve gone over it a few times with the Jaccard.

In the past, this might have been done with a fork and Italian dressing, but the Jaccard makes what was once a arduous process into something that can be done in about two minutes.

When you’re prepping this meat, I find it best to slice it across the grain. This makes each piece of the tenderized and cooked meat much more fall-apart tender, and it’ll make your dinner guests think that you used a much more expensive cut of meat. Additionally, it’s also important to let the steak rest for a bit after cooking before you slice it, so take a second and prepare your other fixins’ first.

Don’t Be Afraid to Marinate

This is a cut of beef that can benefit from using a liberal dose of flap meat marinade. Flap meat is flavorful, but if you’re going to tenderize and make hundreds of holes using a Jaccard knife, why not use the resulting channels and add a bit of extra flavor? Marinades are a great tool for grillers, so let your meat soak overnight for an excellent taste. 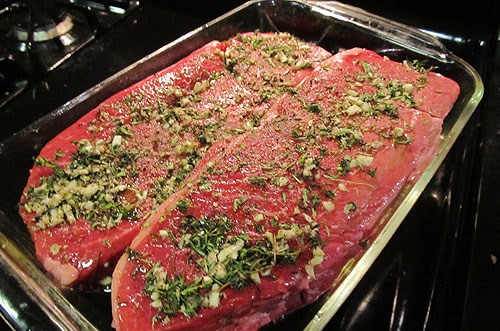 Now that you know a lot about preparing and cooking flap meat, let’s take a look at some of my favorite recipes using flap beef.

I live in a relatively sunny area of the country where I can grill throughout the year, so I am always on the hunt for cheaper cuts of meat, and flap steaks fit the bill nicely. For this recipe, you’ll need at least nine hours between the marinate process and the preparation of the steak. 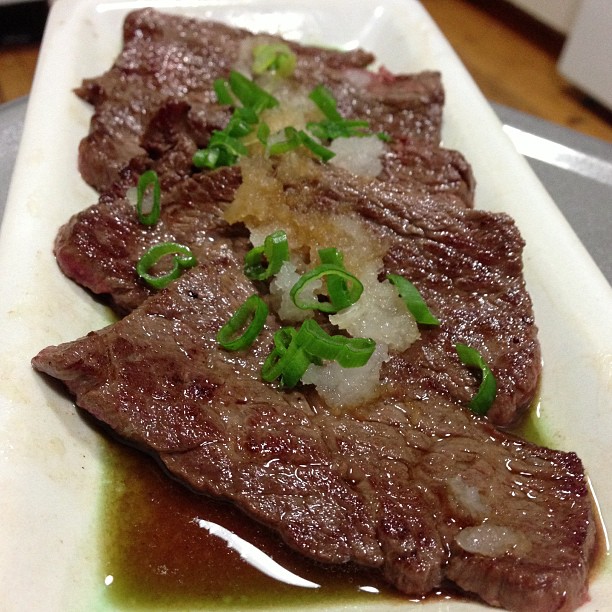 The preparation process is very simple: simply place your steaks in large zipping plastic bags. Next, combine every other ingredient and pour the mixture onto the steaks; just make sure that the entire surface of the meat is covered evenly so that the flavor can penetrate. Also, make sure that there isn’t any excess air in the bag. Place the marinated meat into your fridge and let rest for about eight hours.

Place the marinated steaks on a preheated grill that’s at medium-high heat. Cook the steaks on each side. This preparation stage should only take about 10 to 20 minutes or so. Let the meat rest for about five minutes and cut against the grain when slicing. Serve.

I love to stir-fry, and the flap is a little-known gem for stir-fried dishes. This recipe, once again, calls for marinated flat meat, but as you’ll see, there’s a decidedly Asian flavor in this recipe.

To start, prepare the steak for the flap meat marinade by using a Jaccard knife. Next, place the meat into a large zipping plastic bag. In a large bowl, mix the wine, broth, four tablespoons of the sesame oil, chili powder, cumin, ginger, salt, pepper, and half of the minced garlic. Making sure that there is no excess air in the bag, seal it and let it rest in the fridge for about 10 hours. 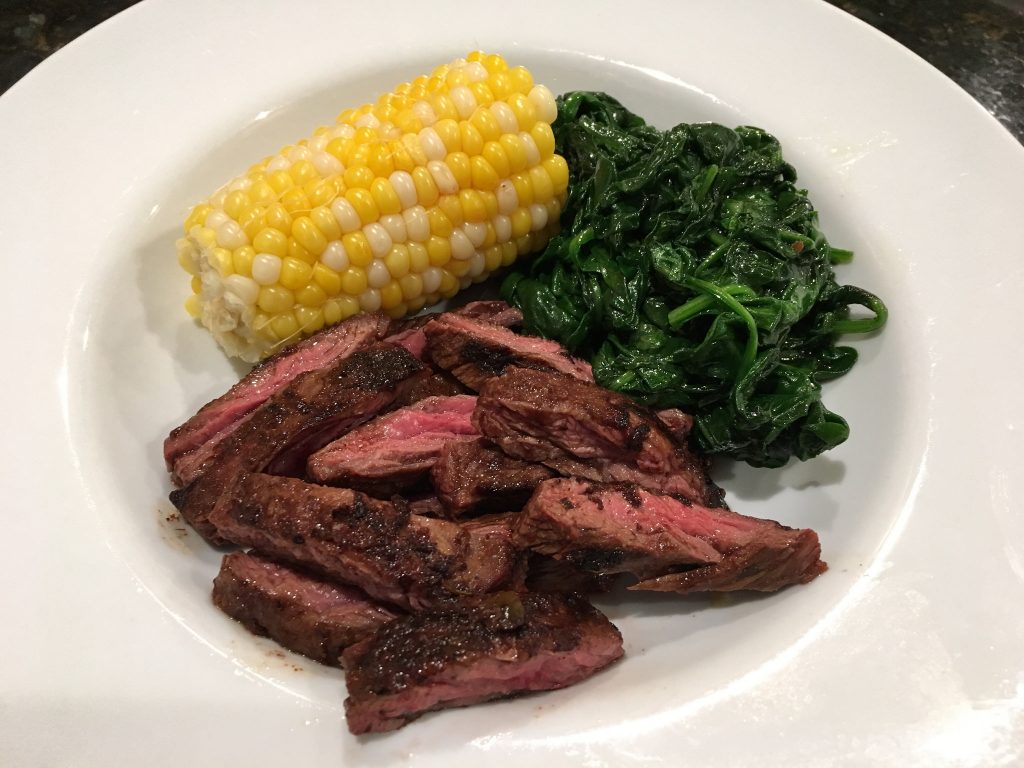 Once the meat has marinated, grab a large wok and heat it over medium-high heat. Pour in the remainder of the sesame oil and let that start to heat. Toss in the onions, carrots, and peppers and stir-fry for about five minutes or until the onions start to look translucent. Remove the veggies from the wok and drain on a paper towel.

Drain the marinade from the beef and slice it into thin strips. Toss the flap steak into the wok and cook until the meat has browned significantly, which should take about five to six minutes. Finally, toss in the stir-fried veggies and cook for about two more minutes and serve.

The flap steak cut is one of my favorite, lesser-known cuts of beef, and hopefully, this guide has taught you a little more about grilled flap steak and other recipes using this part of the cow. It’s worthwhile to find alternative cuts of meat because they are typically just as delicious as the more expensive cuts, so make a trip to your butcher’s and try some flat meat out!