Fontina cheese is in my top three kinds of cheese to work with. This popular semisoft cheese works well as a compliment to a charcuterie plate, on pasta, or even alone with a nice glass of red wine! While Fontina is a great cheese sometimes it may be necessary to use a cheese similar to fontina.

Whether this is due to a necessity such as if you are out of Fontina and can’t make it to the store, or it is due to preference, it is not the end of the world. There are a few different kinds of cheese that can be used as a substitute for Fontina. In this we will go into the history and modern production of Fontina. We will also go over a few substitutes that can replace Fontina in a pinch.

What is Fontina Cheese? 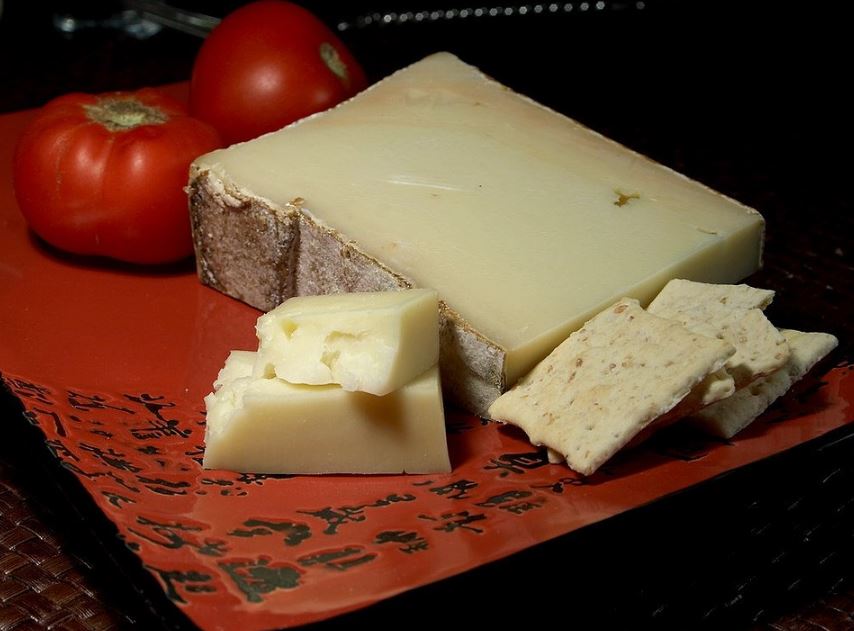 Fontina is a cheese produced in Italy which is made from cow’s milk. There are also producers outside of Italy, including the United States, Germany, and other countries. However, the Fontina produced in Italy is said to have a more pungent smell and flavor when compared to Fontina variants produced outside of the Valle d’Aosta, in Italy, which is the birthplace of Fontina cheese.

Some Fontina connoisseurs believe that the only true Fontina comes from the Valle d’Aosta, but there are very popular iterations being produced in other places in Italy, France, and even the United States. Most Fontina cheese will share a few of the same characteristics. This is independent of where the actual cheese is produced.

Fontina is known for having a very soft and gentle flavor, with a slight nuttiness. This makes Italian Fontina very popular as a vehicle to enhance the flavors in other foods. Many do enjoy this cheese on its own, but Fontina is considered to be best when paired. Fontina is a popular choice when it comes to sandwiches, omlettes, wraps, and many other different pairings. The melt point of Fontina is relatively low, which makes it a good choice for topping on a meal.

If you do not have any Fontina on hand, or prefer a similar tasting replacement, you must first consider the dish you are preparing. The many qualities of Fontina lend it to a wide variety of dishes, and while Fontina can successfully be used on a pizza pie or an Iberico ham sandiwch, many other kinds of cheese are not as versatile. Study each different option in order to find the best fit for your dish. 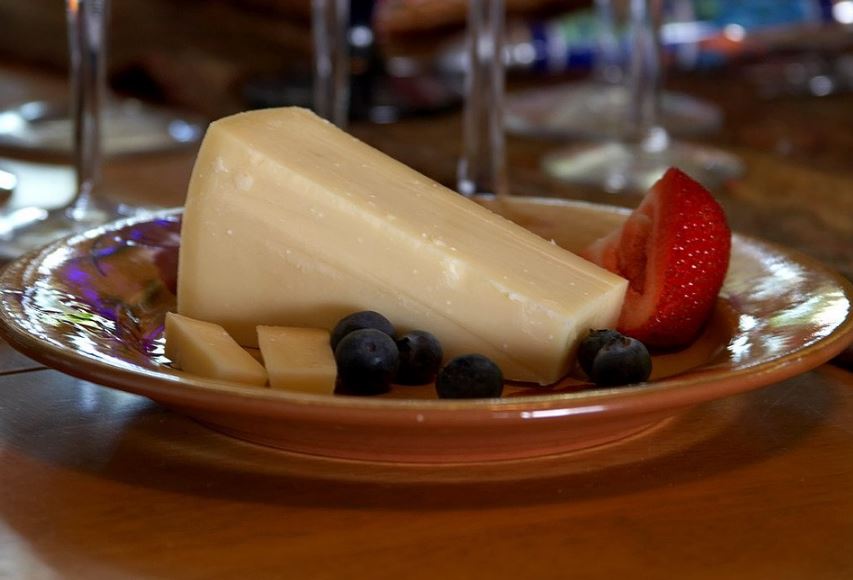 This hard, usually yellow colored cheese is originally from the Swiss cantons of Fribourg, Vaud, Jura, Bern and Neuchatel. The name comes from the small town of Gruyeres in Switzerland. The currently named line of Gruyere cheeses were once considered to be Swiss and French, but a court ruling in 2001 decided that the only true Gruyere comes from Switzerland. Comte and Beaufort cheeses are both French, but were once synonymous with Gruyere.

This cheese is distinguished by its slight saltiness, sweetness, and mild smell. Gruyere changes dramatically over time, so many enthusiasts will include the age of the cheese when discussing the flavor. Before Gruyere is fulled aged it starts like as a creamy, nutty cheese, that is closest to Fontina.

As Gruyere ages, the flavor profile changes as well as the texture of the cheese. The sweetness fades while the nuttiness is said to intensify. The texture becomes more grainy and less creamlike after about a year. While the flavor tends to develop more strongly over a year, a proper Gruyere can mature in as little as 5 months. A young Gruyere can mimic the taste of a Fontina almost perfectly- however be careful of using cheese older than a year- the flavor profile can change dramatically with age. 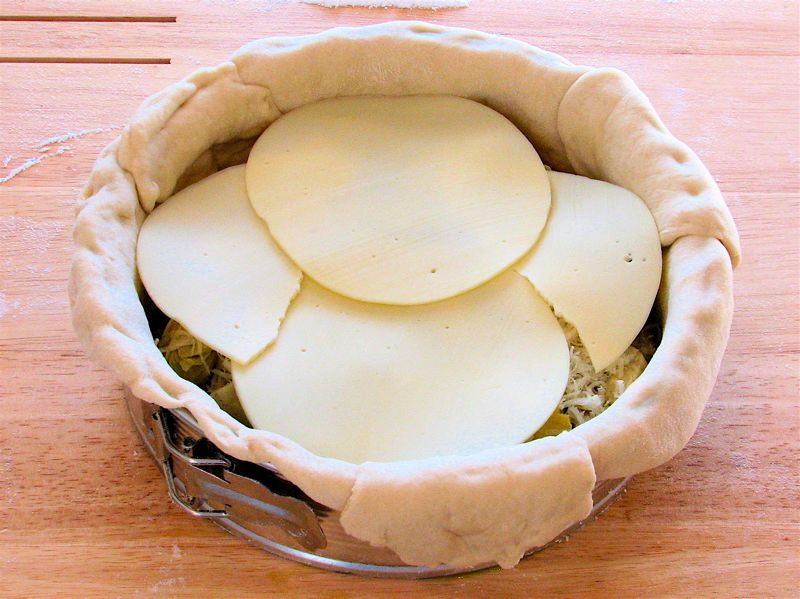 This cheese substitute comes from the Italian town of Casilli, near Mt. Vesuvius. Provolone is known as a pasta filata, or stretched-curd cheese. When provolone is created, it is stretched out into large sausage like shapes 5-7 inches in length. This helps to aerate the cheese and gives provolone a unique, creamy flavor which is a bit lighter than Fontina, but similar in mouthfeel and nuttiness.

Today, provolone is mostly manufactured in Northern Italy, in a medium sized city named Cremona on the west on the peninsula. Other variants of provolone include Provola and Provoleta. These are typically aged or smoking differently than other, basic provolone styles. The traditional style is made with full-fat cows’ milk and generally aged no more than 8 months and no shorter than 5. This is a good replacement for Fontina on sandwiches, melted provolone is a favorite for melted cold cut sandwiches in many places. 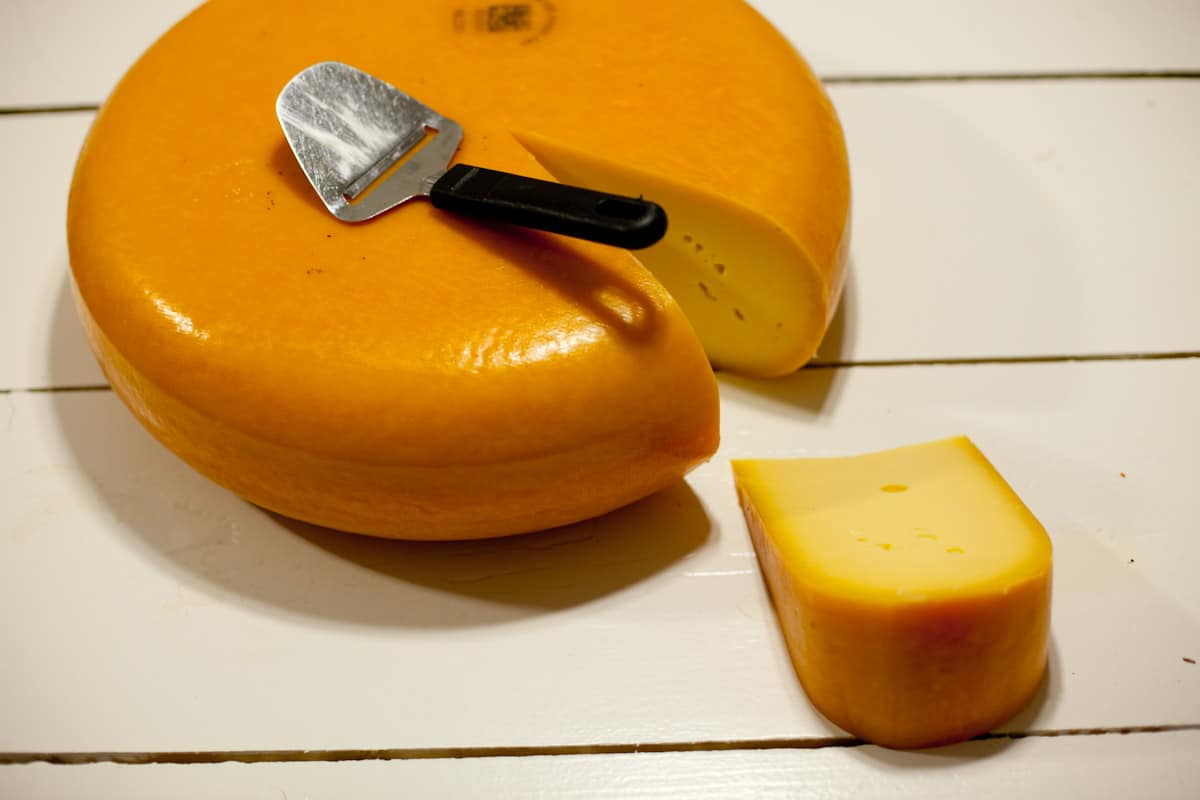 Gouda cheese is made from full fat cow’s milk, has an incredibly mild flavor and is one of the most popular cheeses in the world. It is likely that one reason for the smashing success of Gouda on the global market is that mildness. Since it is inoffensive, many people start with more interesting cheeses by trying Gouda. It is known as a “gateway cheese”. Gouda is also one of the oldest continuously produced cheeses in the world. The first written mention of Gouda dates to the 1100s- more than 1000 years ago!

This cheese is still made in the same place it was more than a millennia ago. The name of Gouda comes from the aptly named Dutch city of Gouda. Oddly enough, the cheese is not produced in this area. Gouda is actually produced all over the Netherlands- the city of Gouda is where this cheese was marketed and sold. This gave rise to the cheese being named after that particular city.

There is some disagreement as to the exact nature of gouda, some believe it is a broader style instead of being one type of cheese. Regardless, there are a few different ways to identify gouda. The flavor will always be very mild- not too sweet, not too salty. This makes it similar to Fontina. When a gouda is young it will take on the mild nuttiness that is also a characteristic of Fontina cheeses. When gouda ages it takes on a fruity, sweet flavor that some say resembles butterscotch. This sweetness generally comes around 2 years of age. 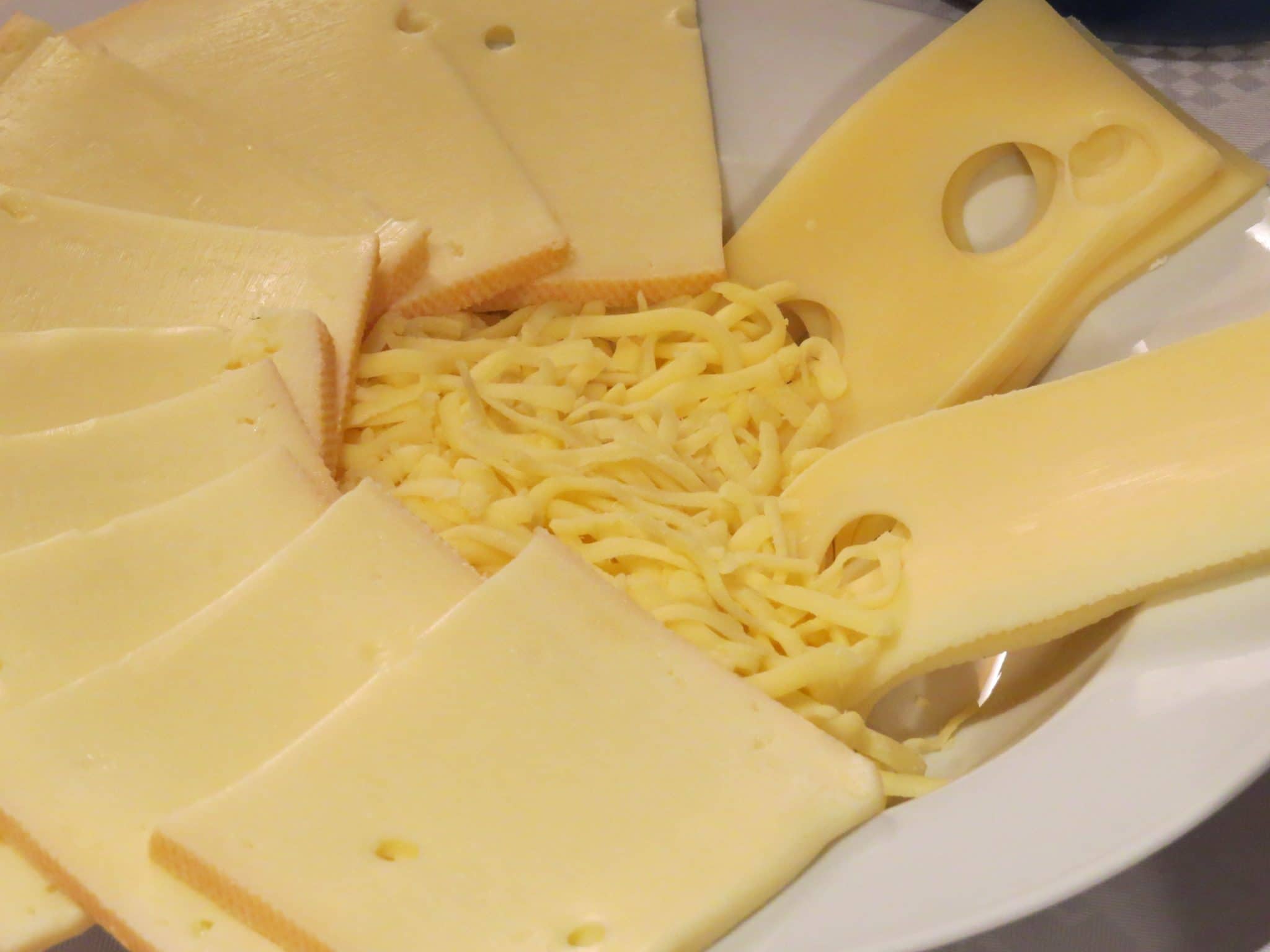 Emmental is another Swiss cheese. This cheese is also known as Emmentaler or Emmenthal, and it is a medium-hardness cheese that is yellow in color. The mouthfeel is similar to that of cheddar, with little grit. The flavor, like the other cheeses mentioned in this article, is very mild. There are two main varieties of Emmental cheese. The first is “Emmentaler Switzerland”. This cheese can only come from the Emmental, Canton Bern region of Switzerland. The more general Emmental cheese is produced around the world.

Emmental is also a very old cheese, with recipes dating back hundreds of years. While this cheese tends to be more popular in Northern Europe it is making a comeback in France and Italy. Emmental is often used as one of the cheeses in fondue, and has a very low melting point. This makes Emmental eminently workable, and thus, chefs around the world choose it as a stand-in for a mild, inoffensive flavor. A key thing to remember about Emmental is the fact that it will not stretch as well as fontina. This lends Emmental to be used as a replacement for fontina in fondues, stews, soups, etc. This makes it so that the difference in texture is not noticed by the eater. 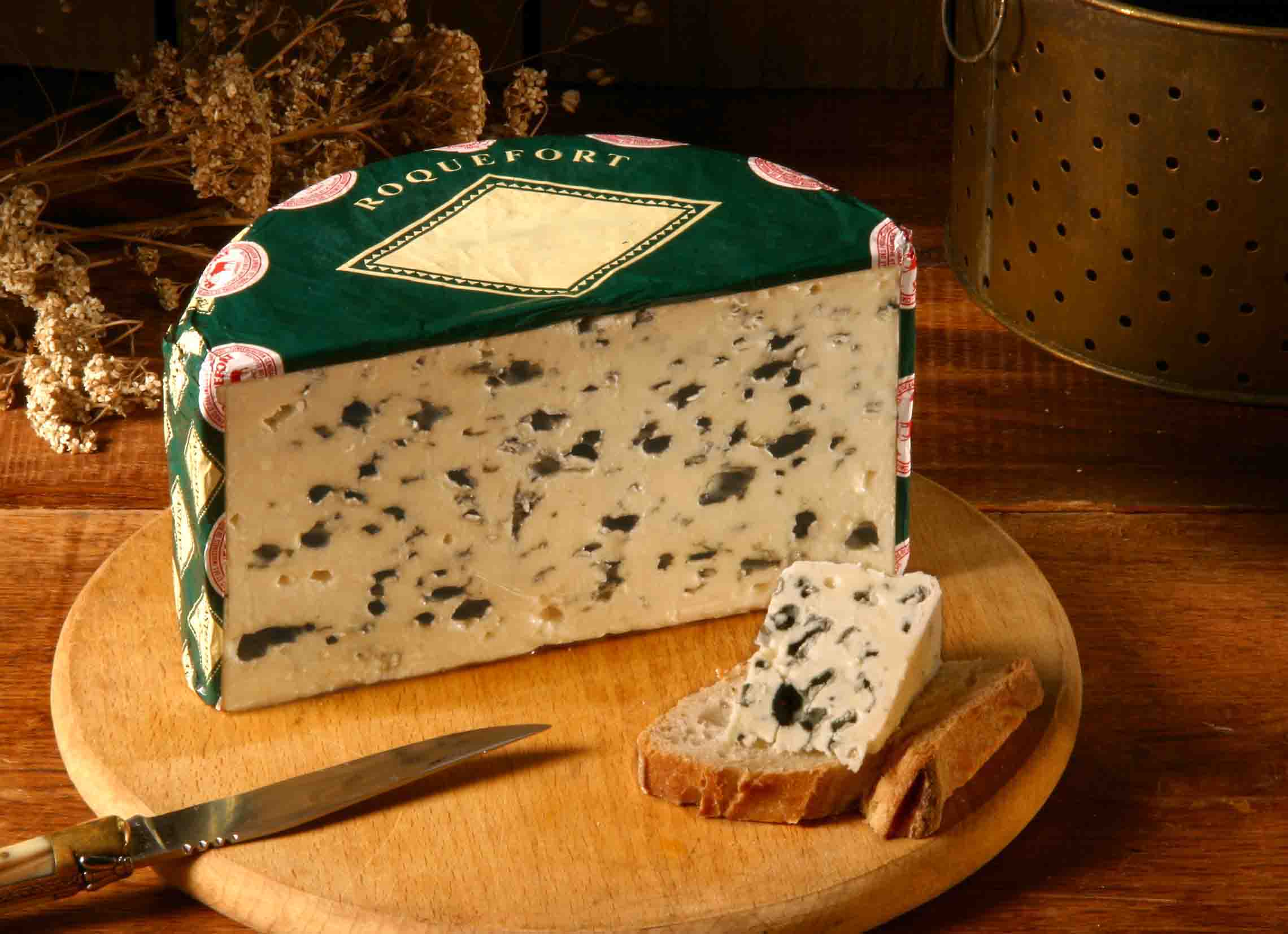 While up until now all of the cheeses listed have come from cow’s milk, Roquefort comes from sheep’s milk. This alters the taste slightly but Roquefort is still mild enough to be considered desirable for replacing Fontina. This cheese comes from the south of France and is considered by many to be one of the finest examples of cheese in the world. Under European law, any real Roquefort must be dry aged in the Combalou caves in the Roquefort-Sur-Soulzon district of France.

Roquefort is white, slightly wet, and crumbles much more readily than fontina. There are also blue veins of mold present in Roquefort, which helps to give it a unique flavor. This flavor comes from butyric acid– you can find this acid in Mozzarella as well. Since this is a dry aged, sheep’s milk cheese it does not come with a rind. This well-loved cheese is not often used as a stand-in for Fontina, but in the right situation, it may be appropriate.

Of course, if you can avoid using blue cheese in lieu of fontina try to do so. Experimenting with a Roquefort in place of a fontina may be a nice little experiment that could lead to great results! All of the best dishes and recipes came from a place of creativity and discovery. Without people willing to replace a fontina with a Roquefort on an open-faced sandwich we would have far less culinary diversity. 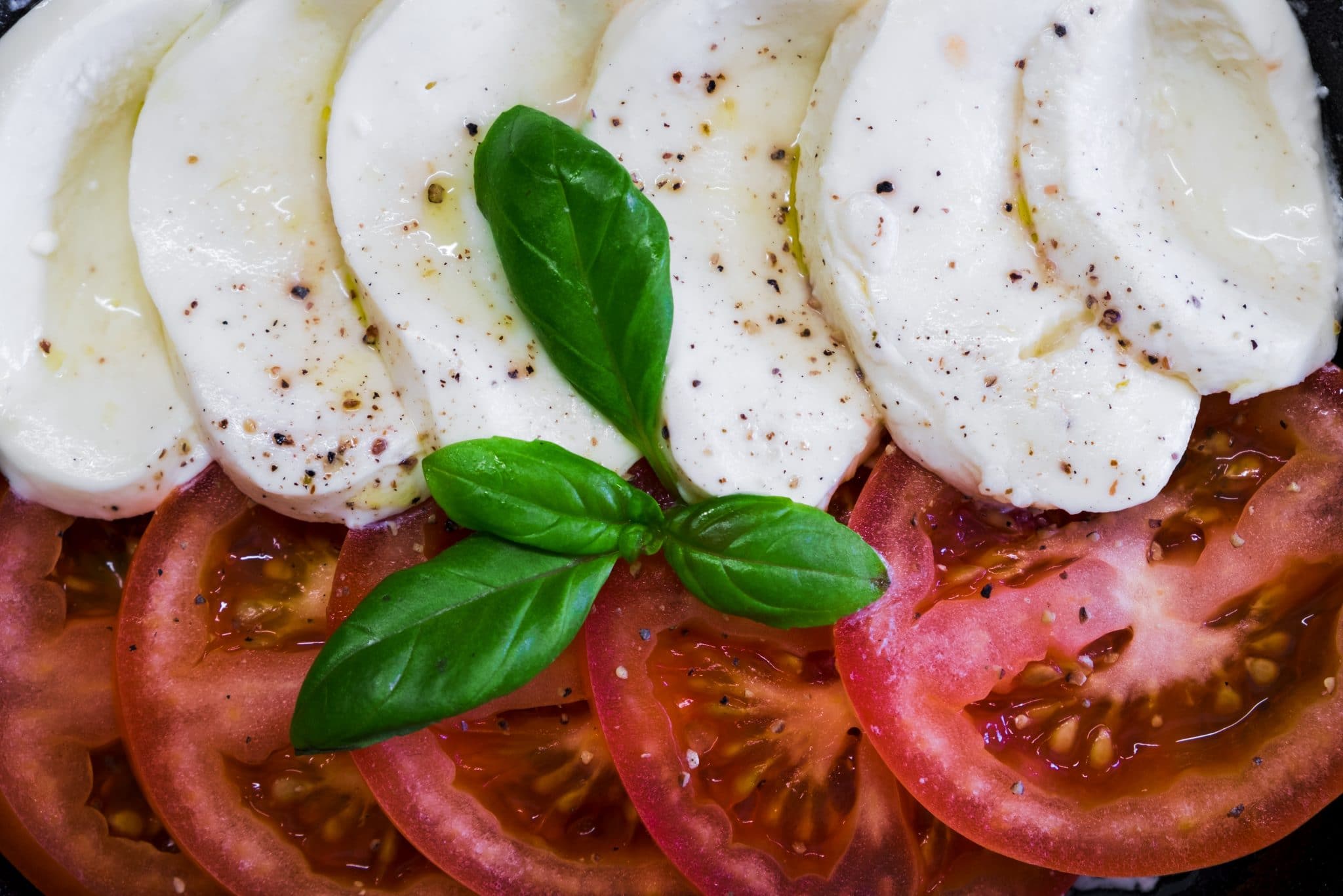 While Mozzarella may not come to mind immediately when thinking of replacements for fontina, there are many similarities between the two kinds of cheese. Mozzarella is made in Italy, in a similar manner to that of fontina. Fontina is made from cow’s milk and mozzarella is made from the cousin of the cow, Buffalo. The stretch drying process of mozzarella is also very similar to fontina. This leads to the texture and consistency of fontina and mozzarella being very similar. The coloration is also almost identical- to the point where fontina can be mistaken for mozzarella.

The difference between mozzarella and fontina would be the aftertaste. The initial taste is nutty and savory, with very little sweetness. The finish, however, is much richer than most fontina. The issue with the aftertaste is often forgotten when mozzarella is used as a substitute in acidic dishes like those that incorporate a lot of tomato sauce. While mozzarella may not be the first choice for replacing fontina, it can certainly do in a pinch. 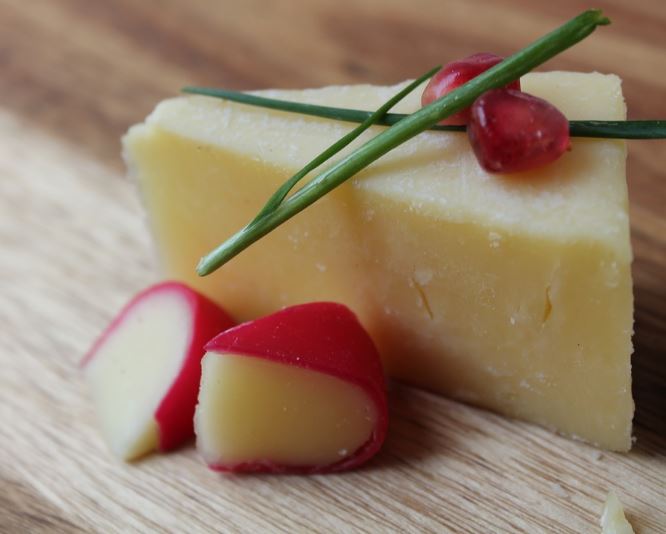 While the more popular orange hued American cheddar is too different from fontina to be an effective substitute, the original British white cheddar makes a phenomenal stand-in. The flavors on the front and back end of the taste scale for white cheddar match up brilliantly with fontina. The mouthfeel is slightly grittier than fontina, so one may want to use cheddar in ingredients where the cheese is melting or completed emulsified.

Cheddar comes from full fat cow’s milk and is only produced in the village of Cheddar in the United Kingdom. American cheddars must be marked accordingly and are vastly different in terms of their flavor profile, mouthfeel, and taste. White cheddar is a great option to replace fontina in pasta dishes, open-faced sandwiches, and eggs. Again, white cheddar is not the first choice you would make when replacing fontina but it has uses in the kitchen.

In order to make sure that you are using the right cheese for the job be sure to experiment. Cooking is part science, part intuition, and part luck. There is no cheese that can be a stand in for fontina 100 percent of the time, but different cheeses will be able to substitute fontina in different dishes. Don’t be afraid to try different combinations of these cheeses as a replacement for traditional Italian fontina- you may be happily surprised with the results!