After a particularly hectic day during a holiday in Mexico, I thought I’d round things out nicely by trying something new for dessert; fate smiled upon me that day by gracing my plate with fresas con crema.

I had never heard of it before, and afterwards it was the only thing I wanted to hear. Indeed, I gained a sort of second wind once it was all polished off, so satisfied was I at how refreshing and deliciously sweet it tasted.

Fresas con crema translated to English means strawberry and cream. After paying the bill, I was compelled to ask the chef Suarez for the recipe. Although he hesitated at first, he eventually gave it to me after my persistent pleading. Turns out it’s quite simple; just strawberry, cream and sweetness!

What is Fresas Con Crema? You’re About to Find Out!

For those that are not too familiar with fresa con crema, or strawberries and cream in English, it’s a very common and popular dessert found in most parts of Mexico.

It is not only popular but also super easy to make. 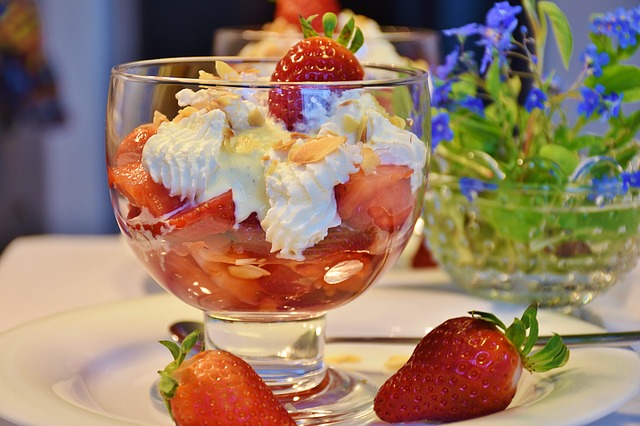 The dessert is so popular that you can find it at any roadside stand when you have that sudden craving for something sweet. As a matter of fact, it is so popular in Mexico that in recent times they have been made in convenient single serving packages in the freezer section of most Mexican supermarkets.

Although strawberries sold at the grocery store are usually large and look perfect, I still prefer the ones bought from local farmers because of their flavor and high level of juiciness.

They always remind me of the small towns in the State of Michoacán, where strawberries are sold on the roadside and farmers always stock their small stands with strawberries aplenty.

The major producers of strawberries in Mexico are the states of Estado de Mexico, Guanajuato, Baja California and lastly Michoacán Michoacán (they produce the largest quantity of strawberries compared to the other states mentioned).

During different production seasons, strawberries varieties produced in the different region vary largely in color, flavor and also sizes. Some of those varieties include the following: Ventana, Charlie, Camino Real and Aromas.

The United States, however, is known for buying a large part of the Mexican strawberry output.

One thing I find pretty amazing about the fresas con crema is that it is undeniably light and refreshing. It is the perfect way to round out a nice meal. When serving guests and friends, the fresa con crema usually looks so appealing that they would never guess how easy it was to prepare. 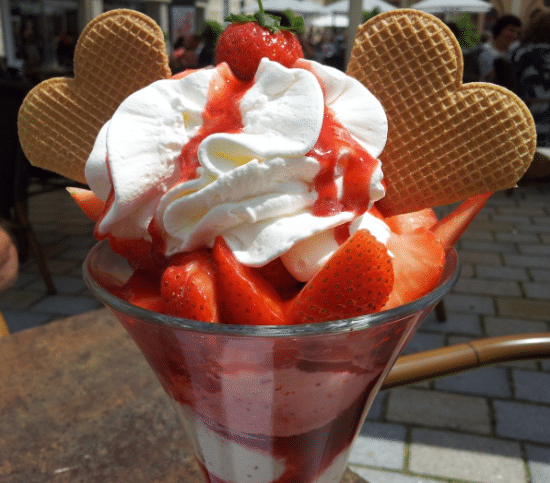 Strawberries and cream is also quite a popular dessert in England, its supposed birthplace. It is usually prepared by pouring chilled cream over freshly-picked strawberries.

I prefer the Mexican dessert. In Mexico, they sweeten it with a small quantity of sugar and cinnamon which makes all the difference. Oh yes, cinnamon is definitely going to be included in the recipe that follows!

First, there’s quite an interesting story behind the invention of strawberries with cream that I’d like to look at.

Myths behind the amazing strawberry and cream

There are a number of myths and stories attributed to this wonderful dish, many of which concern its roots in and numerous links to Wimbledon. Also, upon any amount of research, the name Thomas Wolsey always seem to pop up with every click.

Who is this Thomas Wolsey, and what is his connection to strawberries and cream, you might ask? Thomas Wolsey in 1514 was very close to King Henry VIII and he was quite a prominent figure in the Tudor era. In fact, it was he who started the building of the great Riverside Des-Res, popularly known as the Hampton court today.

As at that time, it was a known fact that the kitchen located within the Hampton court was probably the largest in England. They were tasked with the responsibility of serving more than 600 guests twice a day.

Due to this large number, the cooks were always on their toes thinking of ways to create quick desserts. This led to the creation of the amazing English strawberries. 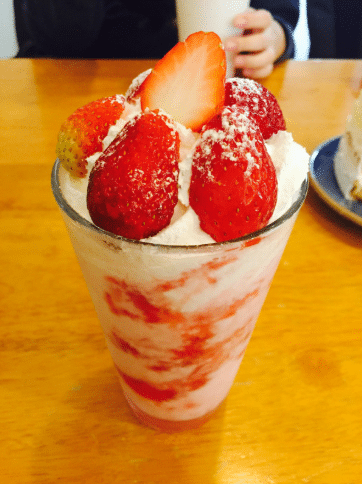 The consumption of strawberries was common for a good number of years, but it was during this Tudor era at Hampton court that someone came up with the idea of adding sweet and delicious scoops of fresh cream. At the time, cream would have been overlooked, as dairy products were thought of as a food for the less privileged.

No one seems to know the name of chef responsible for this amazing creation, so Thomas Wolsey gets all the credit. Soon it became commonplace for the well-off to enjoy while watching a tennis match. There are some who believe it was King Gorge V who introduced the combination at Wimbledon in the early 1900s, but it actually dates back several centuries!

Although there are numerous reasons why strawberries and cream would be served at Wimbledon, it was also the only fruit available at that time of year, and it was also quite a cool and fancy fruit to eat at that time. So that’s how this strawberry and cream mixture, Fresa con crema, came to be!

How to Make Fresas Con Crema

The fresas con crema dessert is the easiest dessert recipe you will ever make and most certainly the fanciest. Strawberries blend pretty well with dessert just like fried chicken wings and sauce.

To make this popular Mexican dessert you will need the following fresas con crema ingredients.

Some crema sold as Mexican crema usually does have added salt so please carefully read the ingredients on the label before buying, as too much salt will definitely ruin the taste.

If your Mexican crema comes with salt, adjust the quantity of salt to be used in making this dessert. Sometimes using salt won’t be necessary, so definitely taste before adding salt.

Other tasty variations of the fresas con crema

Strawberries with orange cream: making fresas con crema with orange and lemon works really well, as the orange adds a citrus flavor to the strawberry, giving it an amazing taste.

It is a little less easy to make; the ingredients are almost the same as fresas con crema, except, of course, for the addition of lemon and orange. The first step is to wash the oranges and lemon thoroughly and dry off water stains from it with a dry clean towel, then peel off the upper layer of the orange and zest the oranges and lemon in a clean bowl.

When you are done zesting, cut the oranges into two equal halves and gently squeeze the juice out of it into a bowl (the same also goes for the lemon). 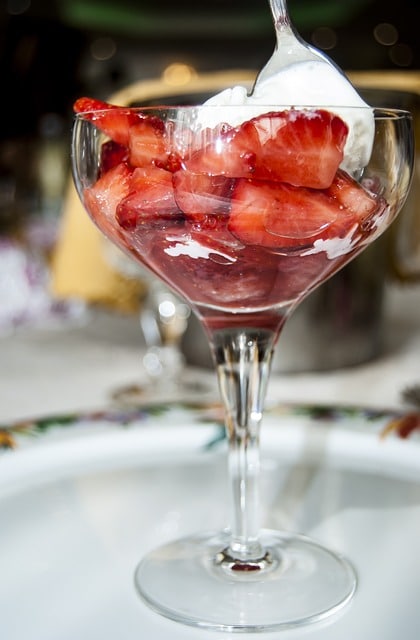 Cover the bowl containing all your mixture with a lid and place in the refrigerator to marinate for 30-45 minutes. The purpose of marinating the mixture is to allow the citrus flavor of the orange and sweetness of the sugar to soak into the strawberries, making an amazing and delicious combination of both sweet and tangy.

To serve, place a scoop of the marinated mixture of orange, lemon and strawberries in a cup, add your cream and top up with another set of strawberries and garnish with fresh mint.

Strawberries with mascarpone cream: this variation of the fresa con crema is actually very unique. The only extra ingredient to the original recipe is the mascarpone cheese, making this is also not difficult at all.

For the mascarpone cheese you simply add about 60g of it to your vanilla, sugar, Mexican crema and cinnamon, then mix thoroughly until it becomes thick. You can also add a little zest of lemon to add an extra citrus flavor.

Once the mixture is made, fill it up in a bag until it forms a star tip, cut off the tip and then squeeze the mixture to fill up the hollowed strawberries. Add a spring of fresh mint to garnish and enjoy.

Take it from me: Fresas con crema is the easiest dessert you will ever make. It is also one of the best desserts you will ever make. I count myself among the lucky ones to have tried this dessert, and so I feel obligated to share it with whomever I can. Impress your friends and family or indulge on a Sunday afternoon; make your own fresa con crema.