Fried leftover spaghetti is a great way to deal with that helping or six of pasta from the night before. It doesn’t even have to be spaghetti; fried pasta can come in any sort of shape and the frying process is a good way to incorporate your omega-rich oils into your diet without over doing them.

You can make this fried spaghetti recipe as two planned meals or as a single meal.

Cook the spaghetti according to package directions until it is al dente. While the spaghetti is cooking, combine the egg, onion, garlic and ground meat and shape them into balls. If you need to stretch the meat, you can add a little grated carrot, but not too much. About one carrot per pound of meat is plenty. The carrot will cook as the other ingredients are cooked and help make the meatballs moist. Heat oil in a heavy sauce pan and brown the meatballs on all sides.

By now, the spaghetti should be done. Drain the water off the spaghetti, then add the meatballs and sauce, mixing them until they are well coated. Sprinkle liberally with grated parmesan or your favorite grated cheese. You can serve the first meal from this mixture. 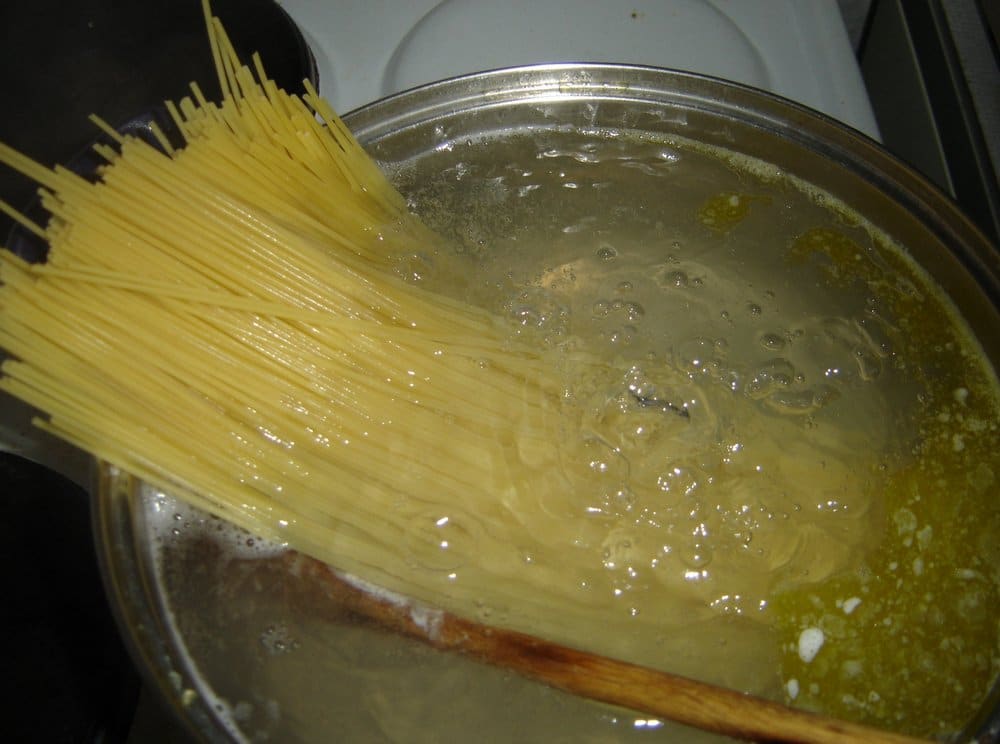 Spread the leftovers into a baking pan and refrigerate overnight. On the following day, cut the congealed spaghetti into squares. Whip the third egg into a froth in one bowl. Break some crackers into crumbs and place in a different bowl. Add some grated parmesan to the cracker crumbs. Dip the squares of spaghetti into the egg mixture, then carefully dip them into the parmesan and cracker crumb mixture, and then re-dip in the egg.

Warm oil in a heavy frying pan and fry the squares of spaghetti until the outsides are golden brown.

You don’t have to make pasta into squares to deep fry it. First, resuscitate your stored pasta. You can even prolong the life of your cooked spaghetti because part of the process of rejuvenating pre-cooked pasta is to put it back in a vat of water and rehydrate it. This means that you can bring the pasta to a boil, effectively killing off most ordinary bacteria that might be trying to make a home between the moist strands. 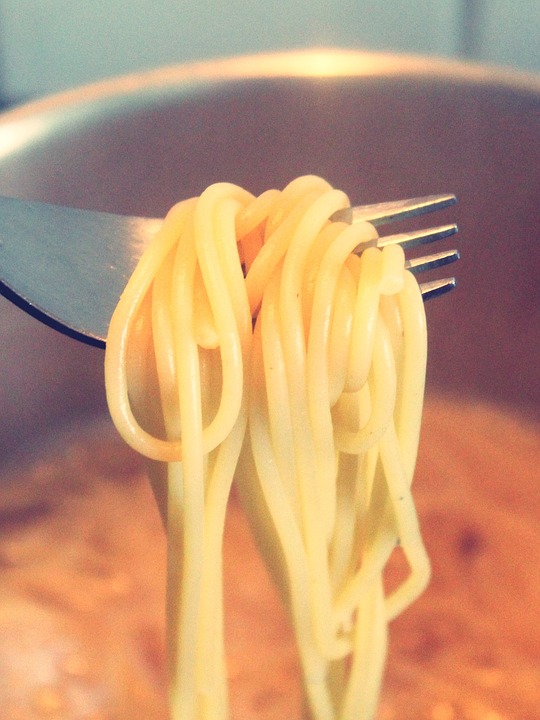 This doesn’t apply, of course, to pasta that has been in the fridge more than three days. At that point, you are better off feeding it to your tub of earthworms or other critters that assist with making compost.

If you love pasta, however, it isn’t likely to stick around long enough to become earthworm food. The morning or even the evening after the first pasta meal is a good time to make the planned-over second meal.

Plain pasta is easy to revive. Just put some water in your spaghetti pot, bring it to a boil, and drop in the pasta. Cook it for three to five minutes. This will rehydrate the pasta. If there are any crunchy bits along the edges, that will soften out and it will be ready to use in any recipe.

If your leftover spaghetti has sauce on it, that’s fine. Just go ahead and dump it in the water and treat it just as if it were plain. The water will dilute the sauce, the whole thing will cook up together. If you had put peppers or other veggies in the original sauce, they will blend, and taste even better than they did the day before. You can let the water rinse the sauce from the pasta, or you can let the sauce be part of the next step.

Now to some ways to use your revived pasta.

Best ways to use revived pasta 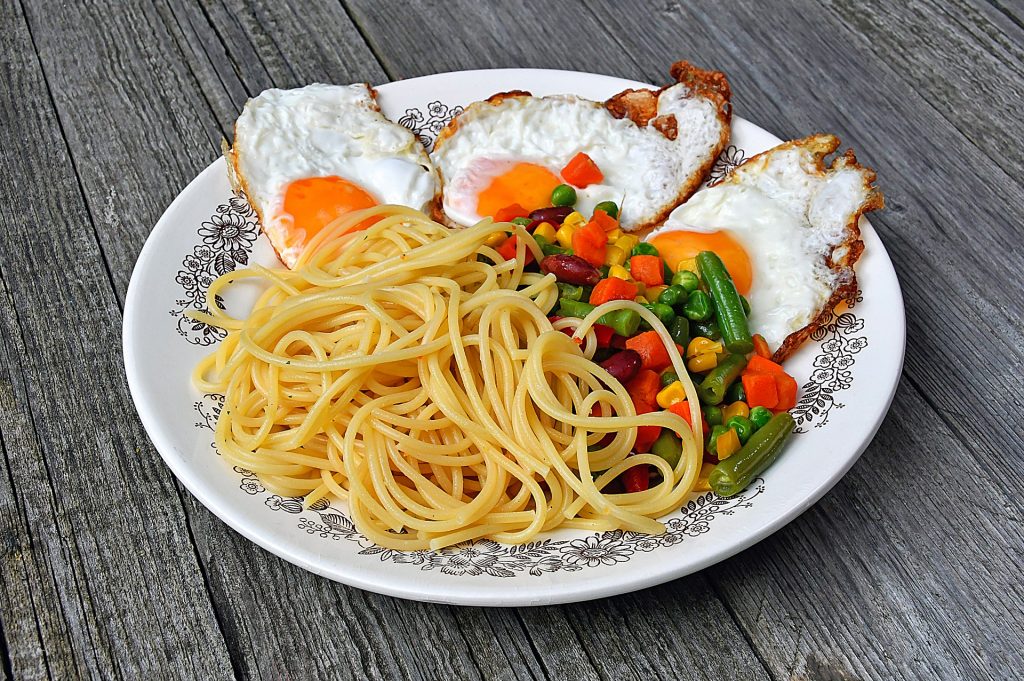 Don’t believe pasta is for breakfast? With this delicious morning-after revival of leftover spaghetti, you will change your mind. Start by reviving the pasta, as described above. Or, if it is sufficiently fresh, go straight to the next step.

In a deep pot, heat up about a quarter cup of olive oil. Throw in some garlic and perhaps a few mild peppers. You know your own taste, so let that guide the kinds of spices you add. Some other ideas include tarragon, curry powder, basil, thyme or rosemary. You can even use a Cajun spice mix, if that is your fancy. Just remember the goal is to enhance flavor, not cover it up.

Finally, grate some parmesan over the pasta and eggs, or add some other favorite cheese and top with parsley or cilantro. Accompany with some fresh fruit on the side and a cup of your favorite hot beverage and you have a meal that will sustain you well past lunch. 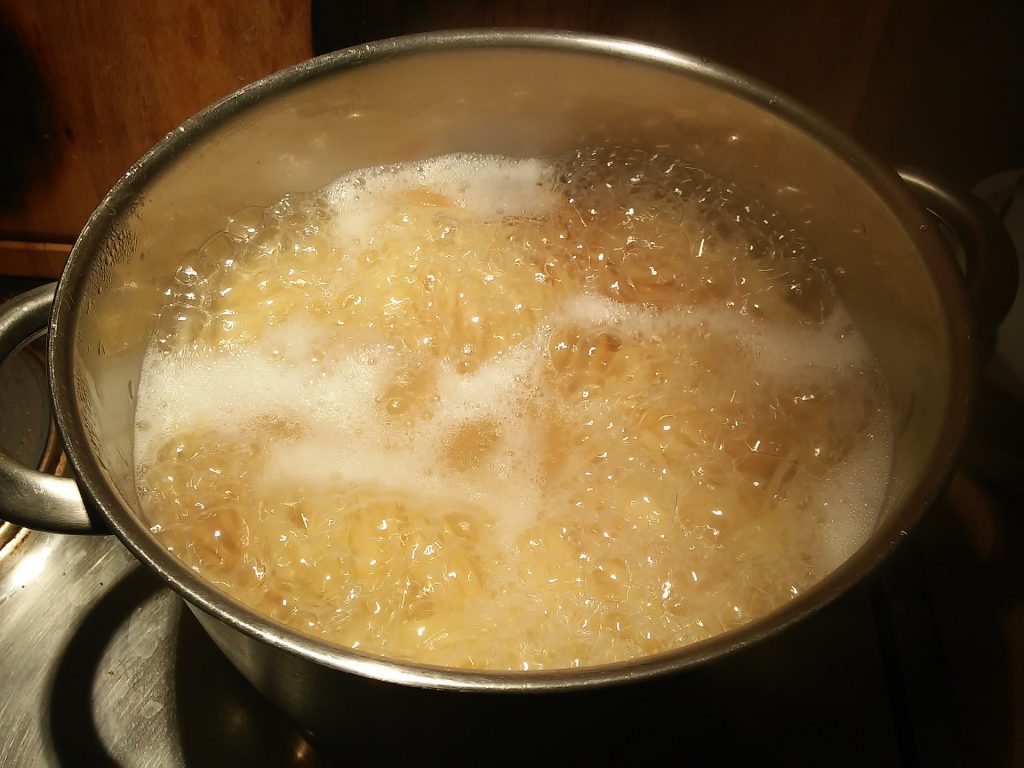 Spread your prepared batch of spaghetti and meatballs or spaghetti with just plain old sauce with sausage or hamburger mixed in, into a large baking pan. Put some plastic wrap over the container and place it in the refrigerator and forget about it twelve hours or more. It should congeal into a mass that you can cut into squares that will hold together. Pierce each square with a wooden skewer, popsicle stick or similar item.

Heat two cups of oil in your deep fryer or a saucepan. You want it just hot enough to quickly brown the squares while cooking them all the way through. Place the squares carefully in a frying basket and lower the basket into the hot oil and cook until they are crispy brown on the outside. Gently place the squares on a paper towel to drain and serve warm. It is a quick way to turn humdrum leftovers into something special.

There are a lot of ways of going about making pan fried spaghetti. The very simplest method is to warm a little olive oil or even some butter in a heavy skillet, you can use iron if you don’t have any sauce on the spaghetti but use a coated pan if tomato sauce is involved. Tomato sauce and metals don’t usually work well together.

When the oil is hot, add cooked spaghetti noodles to the oil. Stir until the noodles are completely coated in the olive oil or butter and they are heated through. Top with grated cheese, parsley, or even your favorite steamed mixed vegetables. In a pinch, you can open a container of canned meat to add. It really depends on what you have on hand. Flavor it with your favorite spices. Italian spices go very well on pan-fried spaghetti, but you can use any sort of spice that you enjoy. 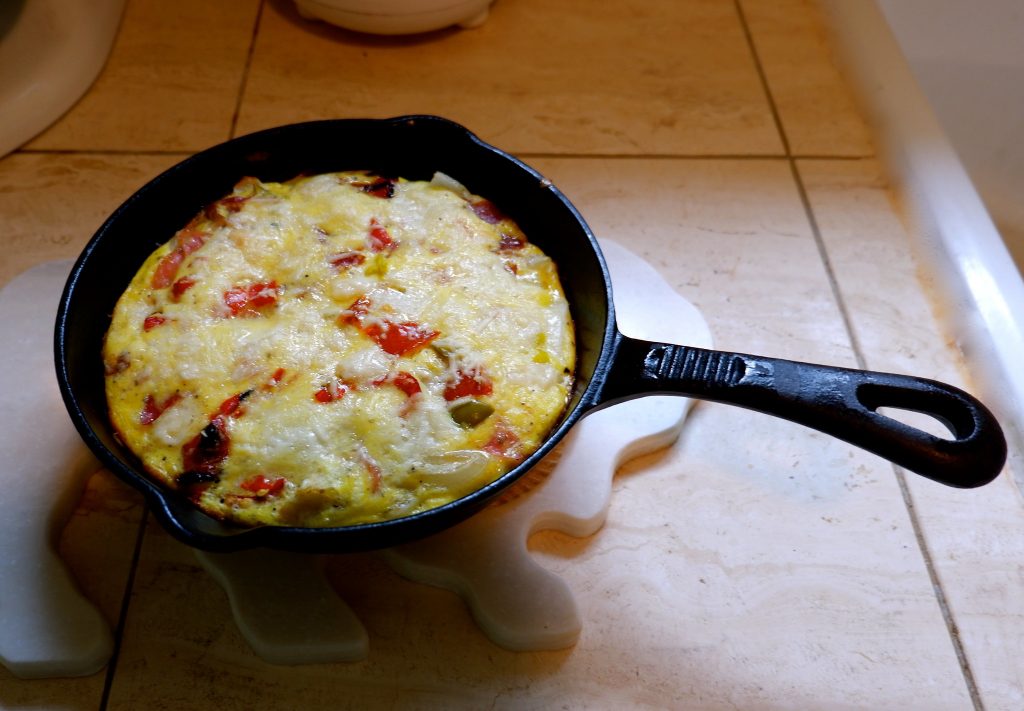 Alternatively, you can make your cooked pasta into a delicious frittata. First, cook the spaghetti or whatever sort of pasta you have on hand, just to the al dente stage or revive yesterday’s leftovers. Next, add some parmesan and butter to the warmed, cooked pasta, and add about 2 eggs for every cup of cooked noodles.

Throw in some spices. Fresh parsley, basil and a dash of ground pepper are nice, but use your own palate as a guide. The mixture should be somewhat liquid, similar to an omelet mix.

Heat butter or olive oil in a heavy pan and pour about ¼ cup of the egg and noodle mixture into the pan. Cook until golden brown on one side, then flip and cook the other side. Serve warm.

There is nothing simpler than stir fry spaghetti. In one pot, start your water boiling to revive your leftover spaghetti, or make some up fresh. Meanwhile, chop the vegetables for your stir fry. Good vegetables for this dish include mild and hot peppers, onions, broccoli or cauliflower. Good proteins include any kind of ground or shredded meat, tofu or even lentils or beans.

The wonderful thing about stir fry is that it is one of those dishes that thrive on going to the refrigerator or freezer and just looking for what you have on hand. Or it can be planned with your favorites.

When the vegetables are chopped, add the pasta to the boiling water so it can be cooking. Heat olive or canola oil in a heavy frying pan that has tall sides. Or you can even use a large pot and do the frying in the bottom of it. Add highly flavored vegetables, such as onions, garlic or peppers first, then add the milder ones such as broccoli, cauliflower, mushrooms or bean sprouts. Cook fresh meat or beans separately.

You can even cook them ahead. 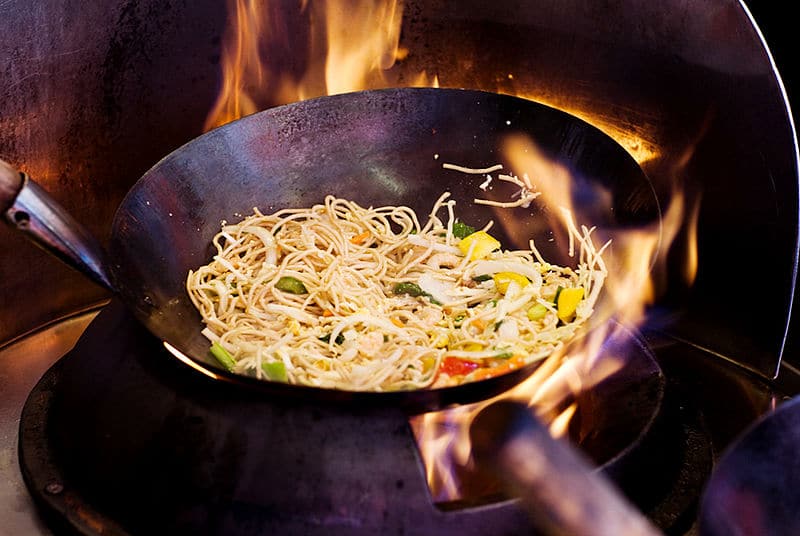 When the vegetables are heated through, add the protein and allow it to heat quickly. Then add a liquid such as apple or pineapple juice with a little soy sauce. Allow the meat and vegetables to finish cooking, then sprinkle in two tablespoons of cornstarch per cup of liquid. Stir until all the pieces are coated and the liquid thickens. Remove from the stir fry from the heat and allow it to stand. It will continue to cook in the heavy pan, and the sauce to thicken.

Drain the spaghetti, and then mix the stir fry mixture with the noodles or serve each separately so that everyone can top their spaghetti as desired.

Fried pasta can enliven and stretch almost any meal. The pasta can be any sort of shape, spaghetti, macaroni, spirals, vermicelli; and nearly any sort of grain, wheat, rice, oat, or barley. The versatility means that you can easily adjust the pasta to fit almost any diet. The exception might be someone that is on a diet that strictly prohibits starch. For those folks try using some spaghetti squash instead of pasta. 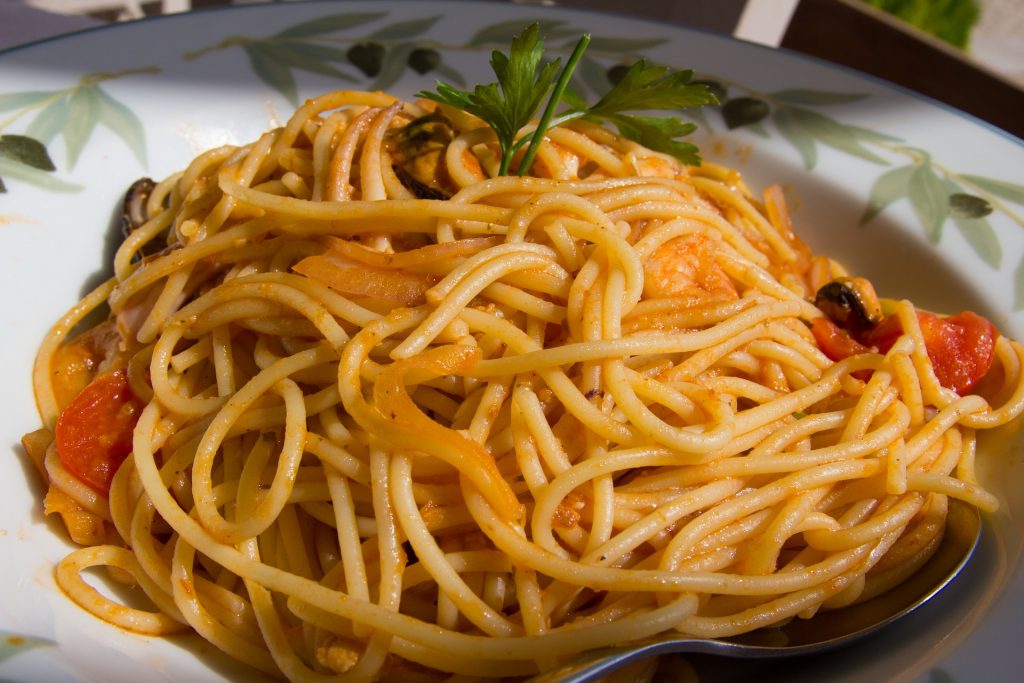 Cook the pasta according to package directions in an amount that will provide two servings per person. That makes a nice dining opportunity and prevents an excess of leftovers. When the pasta has reached al dente, that is, soft enough to cut with a spoon but still a bit chewy, drain it and set it aside.

In a heavy frying pan with tall sides or a heavy bottomed pot, heat about three tablespoons of cooking oil. Olive oil is nice, as is canola oil, but you can use whatever oil you have on hand. If you are making a large batch, you can use more oil. Add a little garlic, some sliced onion or mushrooms. Again, use your own preference and that of the people who will be eating. Hot peppers are sometimes nice in this preparation.

When the onions are translucent, add the cooked pasta. Stir it until all the pieces are coated in oil and the vegetable bits are well mixed in. Serve hot, with a sprinkling of parmesan and a bit of parsley or green celery top for garnish.

Fried left-over spaghetti might not sound appetizing if you’ve not tried it. But you might find that soon you are making a double batch of spaghetti, just so you can enjoy the many variations possible with this old favorite. 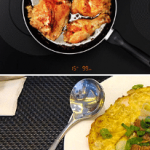 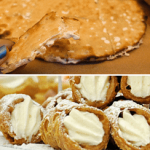