In 1998 when we were living in Australia there was a gas shortage resulting from a terrible explosion at the Esso natural gas plant in Victoria. It was September, the end of winter, and not that winters in Melbourne are particularly virulent, but at the time I recall gloomy grey skies, chilling winds, and a sense that the world was nearing catastrophe.

I was eight, my brother had moved to America, so it was the three of us, my mother, father and I, in our drafty house with its floor to ceiling windows and cold tiled surfaces. Our stove was gas, as was our heating.

My parents were self-proclaimed minimalists, we had no fancy gadgets, no electric kettle, not even a hot water bottle. But what my father did own were two gigantic electric “plaques” or “crêpières,” the iron crêpe-galette makers that the French use to make crêpes. The plaques are circular and thick and very flat. 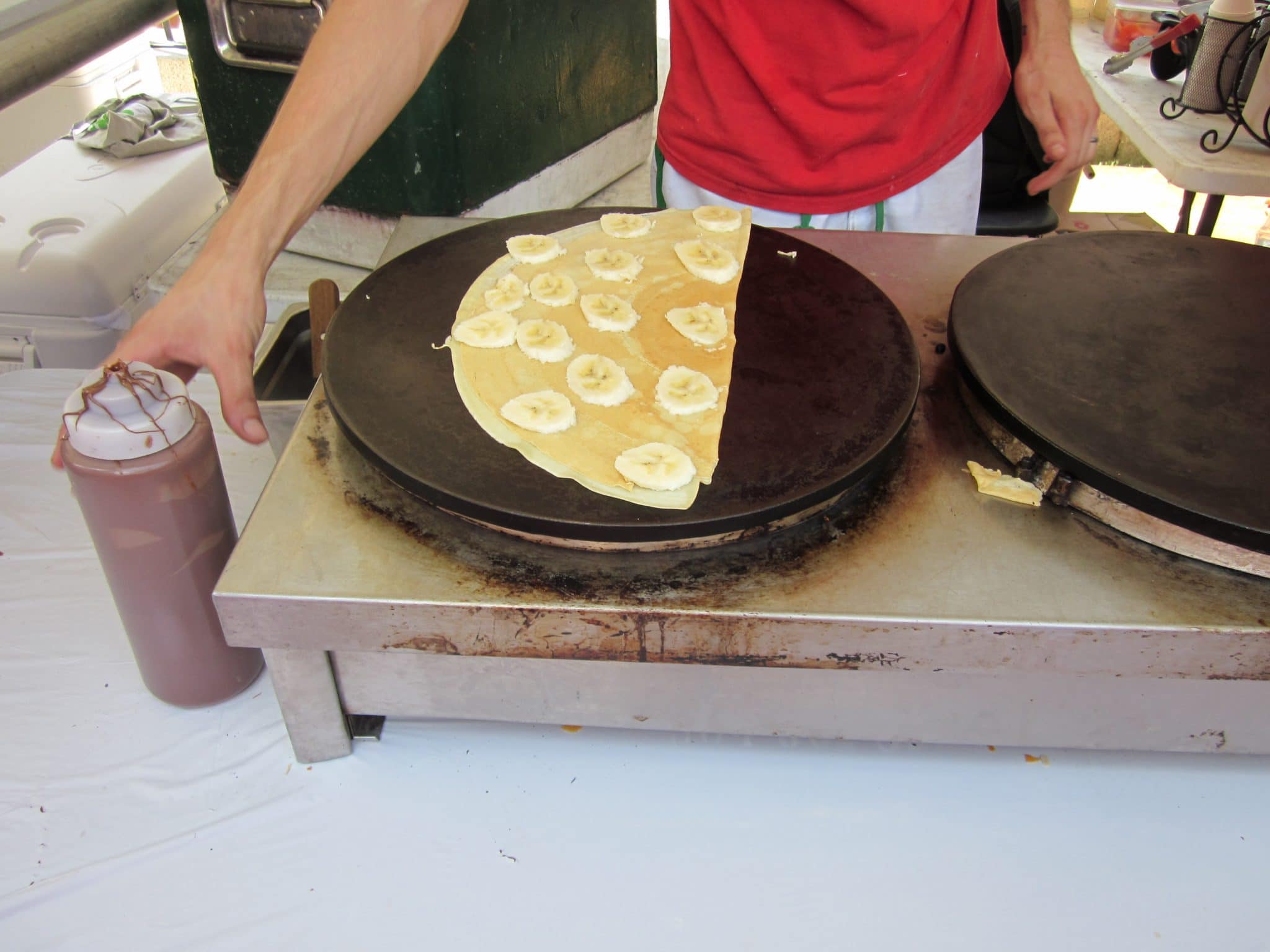 These are so heavy that I had nightmares of my father accidentally dropping one on his feet and breaking every bone in his body. My father lugged them from Brittany, France, where he was born and raised.

Usually the plaques were reserved for guests, when we invited Australian friends for festive “French” suppers in which my father wooed our new friends with buckwheat savory pancakes.

It was his rendition of the Aussie barbeque because he could cook outside as long as there was an outlet, and he loved to prepare for hours, if not days, in advance, caramelizing fat onions in the oven, grating kilos of cheese, stewing apples for dessert, and experimenting with new fillings such as a smooth ganache made with prized Valhrona chocolate that he had hunted down.

While the rest of our world watched the news and waited for the gas to return, my parents and I sat by our plaques. In our deepest pots we heated water to wash ourselves. We scrambled eggs, boiled spaghetti, and made fried rice directly on the plaques.

The house was cold, but then again my mother only turned on the heat when we were on the brink of contracting pneumonia. Our lives centered on these two miraculous plaques as they heated piping hot and kept us nourished with the same meals my parents cooked otherwise on the gas stove. 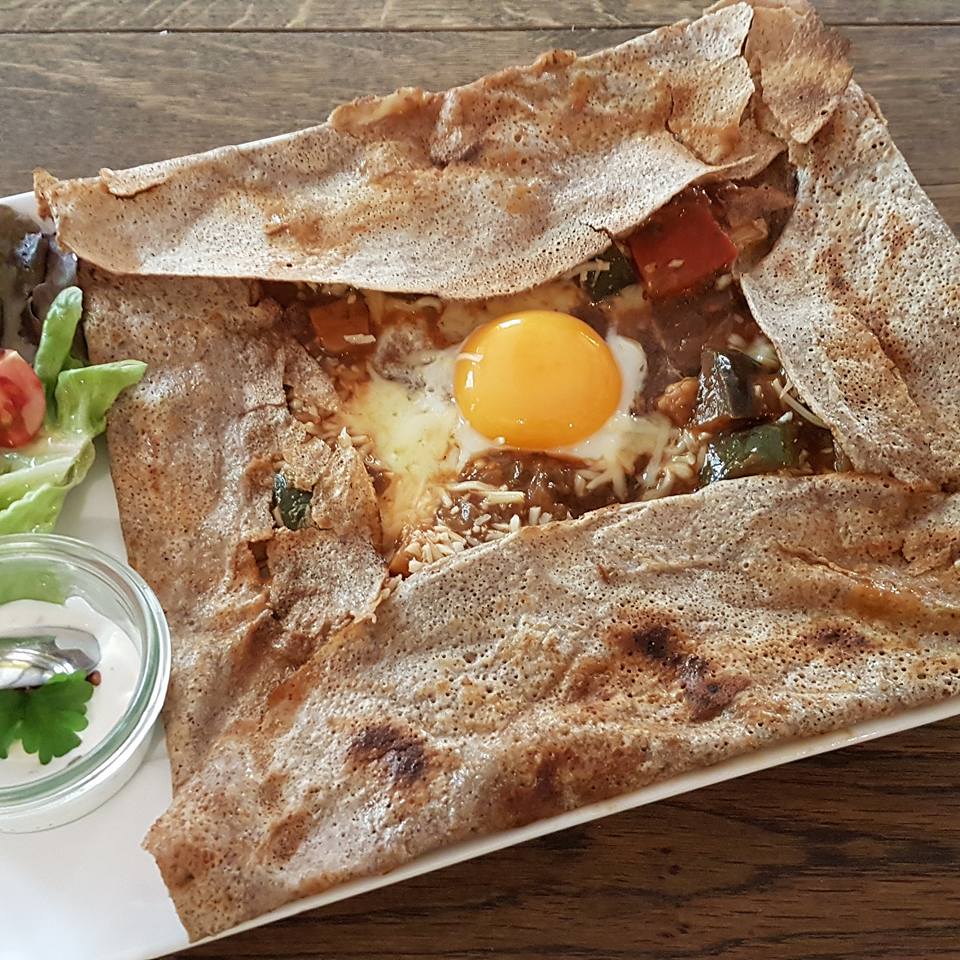 Whenever my father moves, which is often as our blood is somewhat nomadic, he sheds personal belongings, but the plaques, these stay attached to his hip, following him from France to Australia to America, wherever it is he next finds himself. Galettes, the buckwheat crêpes, are his identity.

The smell of buckwheat stirred in water is the smell of home, of sodden earth or humid sand. Today we see this greybrown dust everywhere as gluten-free flour. My Japanese mother calls buckwheat the noble plant because it grows best in poor, arid soil. In Japan pillows are filled with buckwheat hulls to cool one’s head throughout the hot summers. The hulls are no larger than pearls.

In the West of France where my family is from, making galettes is a tradition. When my father’s grandmother was sixty she moved from her farm in the countryside to Rennes. She opened a storefront where she sold galettes by the dozen. It was hard work: her kitchen was minuscule, it was very hot, and she had to wake up before dawn and stay on her feet until deep into the night. She had an apartment above the storefront where my father stayed during holidays.

In the morning he knocked on the floor with a broom and she brought him breakfast in bed, toast with salted butter and jam, to be dipped in a large bowl of hot chocolate. My father learned from his grandmother, I learned from my father when I was very young (like swimming, I can’t remember when it happened), and today my little brothers are learning the family skill. 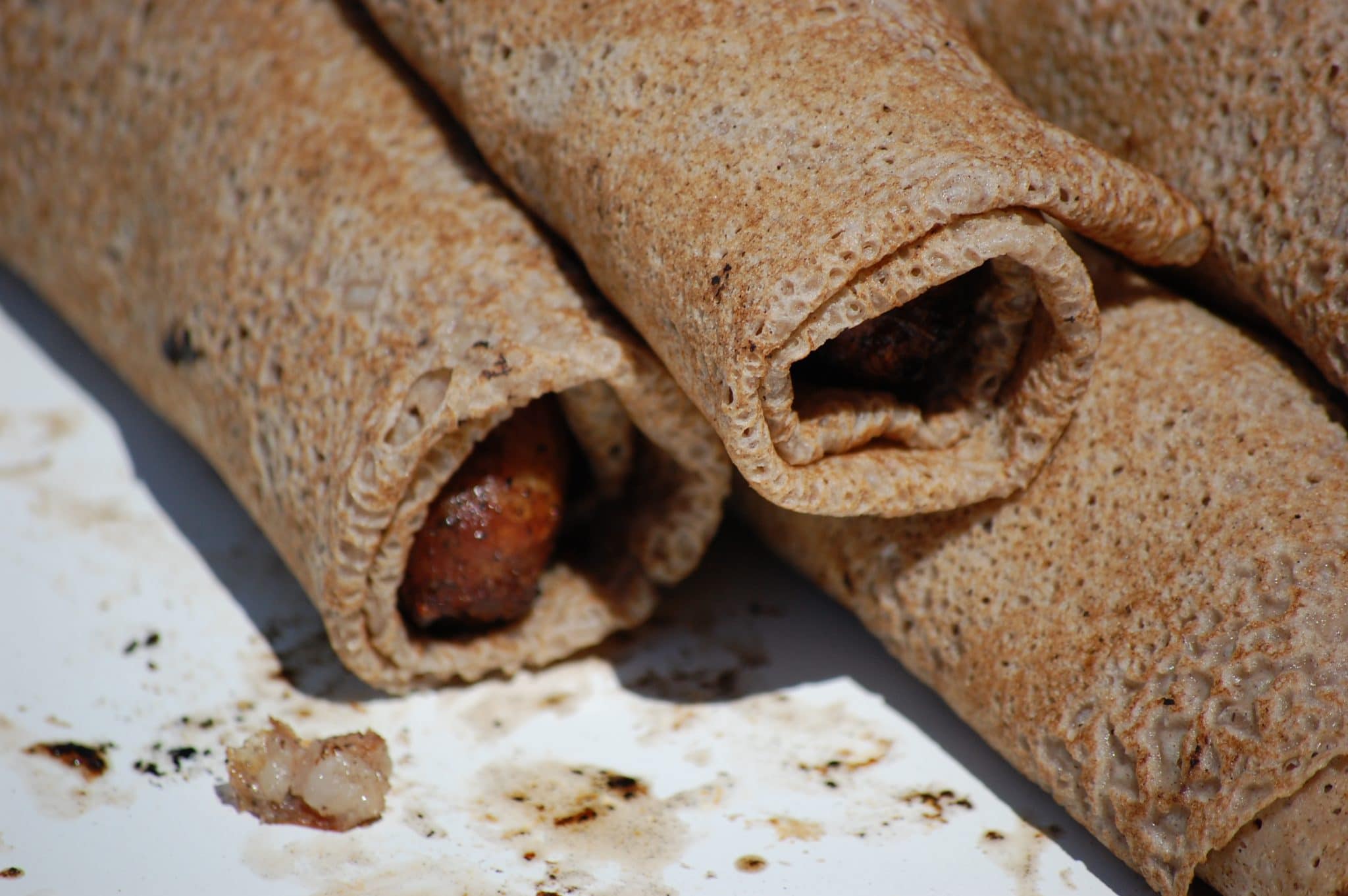 When my father makes galettes he pours a ladle onto the plaque, quickly spreads it thin into a wide disc, waits for the water to evaporate in a layer of steam as the galette cooks. The galette is flipped once, then twice. Copious amounts of salted butter are lathered, the filling nestles in its center, the galette is folded like an envelope, and ready to be consumed.

We like to eat our galettes rolled around a grilled sausage or with cheese, ham and an egg. One must eat the galette instantly and it is best savored when unbearably hot and crisp.

This is not a social event: eat rapidly and without interruption, the last bite should still be warm. But we often eat two or three galettes at once, and so the wait between our galettes is filled with chatter, sips of cider, and the anticipation of more as we watch my father at work, pulling, flipping, filling, and folding.

Sanaë Lemoine was born in Paris to a French father and a Japanese mother, and was raised in Australia and France. She is completing an MFA in Fiction Writing at Columbia University and is at work on a novel. She loves to concoct new dishes in her Brooklyn kitchen. You can read more of her food writing at The Walkin Kitchen.
Web » Twitter »