Banh bo nuong is a sweet delicacy in Vietnam. If you ask anyone, who has eaten honeycomb cake what it felt like, adjectives such as delicious, spongy and chewy will feature in the description. The Vietnamese make this cake using yeast, rice flour, sugar, and water, though there are many variations as to the same. The cake derives its name from its honey-comb appearance in that it has many air bubbles inside.

You will find that many recipes of this cake will ask you to use coconut milk and the reason behind this is to add some aroma and flavor to the result, thus making it all the more delicious. If you use a Chinese recipe, you will find that there is no coconut milk in play. However, this does not affect the cake’s taste in any way. There are many ways in which you can enjoy the Vietnamese cake. Although most people look to it as a dessert, others consume it alongside meals. It tastes great either way. 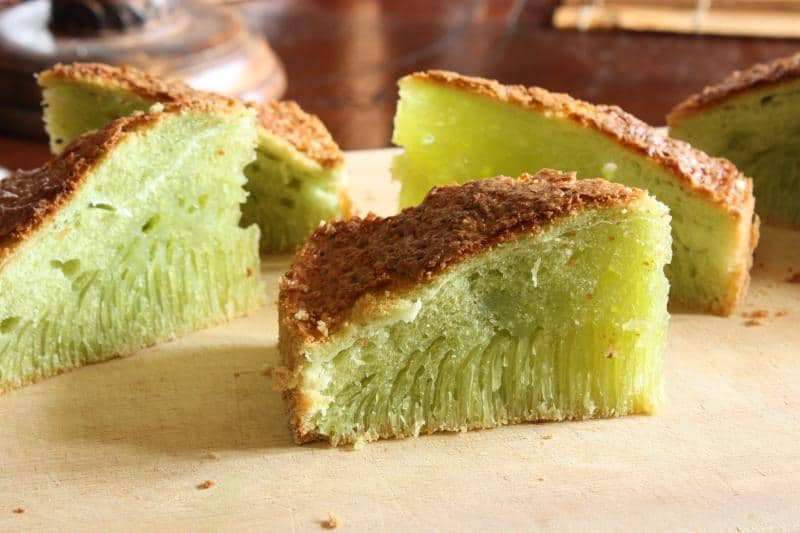 Banh refers to a cake and bo can mean either cow or the act of crawling. This name stems from how the cake crawls on the rim of the baking tin once it is ready. As such, the crawling cake translates to banh bo.

There are many varieties of the same.

The first is the banh bo nuong which many people have come across, and the delicacy whose recipe I will be sharing with you in a short while. To make this variety, you will need to cook the batter in an oven. The result has a yellowish-white hue, and it has a golden color on the outside. There is caramelized coconut milk in play, hence the beautiful shade. The cakes are usually large, and as such, most servings comprise of slices. It is quite easy to down these cakes without drinks as they are sweet and moist. 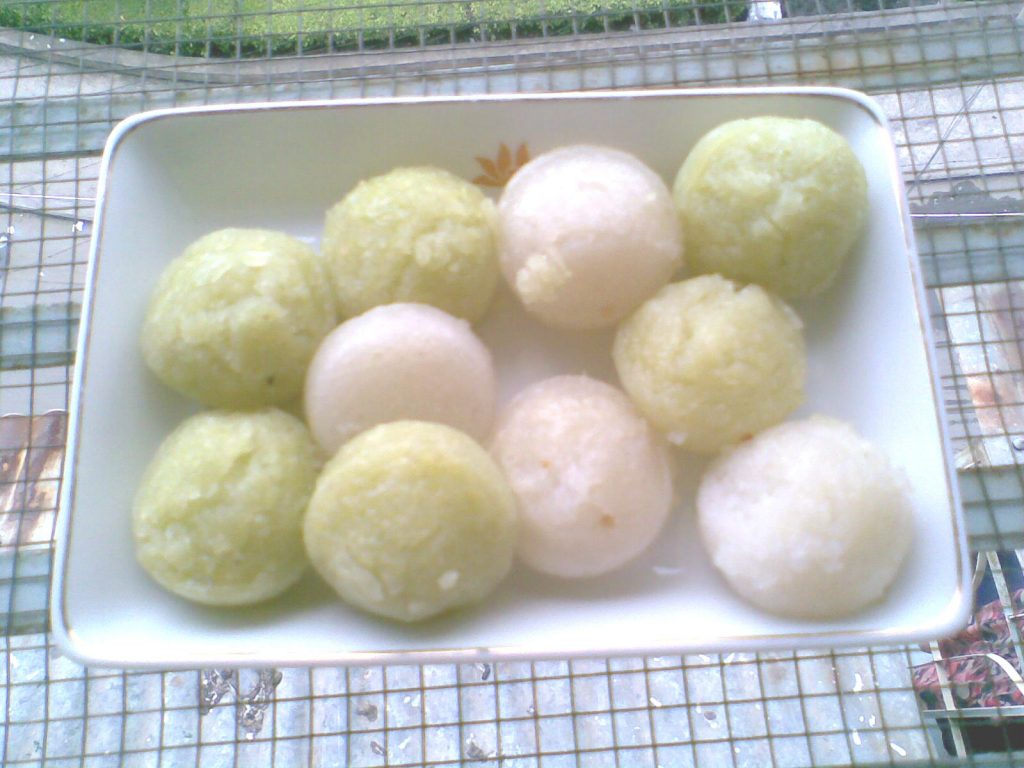 Banh bo hap is the steamed version of the cake, and it is quite similar to the baked cake regarding appearance. The difference comes in when it gets down to their sizes. These versions are small, and they come in the shape of balls. These cakes come in an array of hues such as green, white, pale purple and pink, depending on the extract in use.

There are many ways in which you can enjoy these delicacies. The first way is alone as is the case with the baked version. The second method is by placing them between hollow donuts, and the third is by adding some coconut milk sauce as an accompaniment.

You will find these two cakes in areas where Vietnamese population is high such as the US, France as well as in Vietnam.

Banh bo sua is a variation of the ban bo nuong. Where the latter version uses coconut milk, this one requires the use of milk powder or condensed milk. You need a small pan to achieve the right consistency.

Banh bo dua is another variation of the ban bo nuong, and it is more recent than the banh bo sua. The main reason why people do not look at it as a type of honeycomb cake is its ingredients. The main players in the making of this cake include sweetened coconut, wheat powder, and baking soda and chicken eggs. The result of all these variations is a leathery taste. To add onto the exceptions, you will find that the recipe for this also calls for the use of sweetened coconut with cooked mung bean in the middle of the cake. 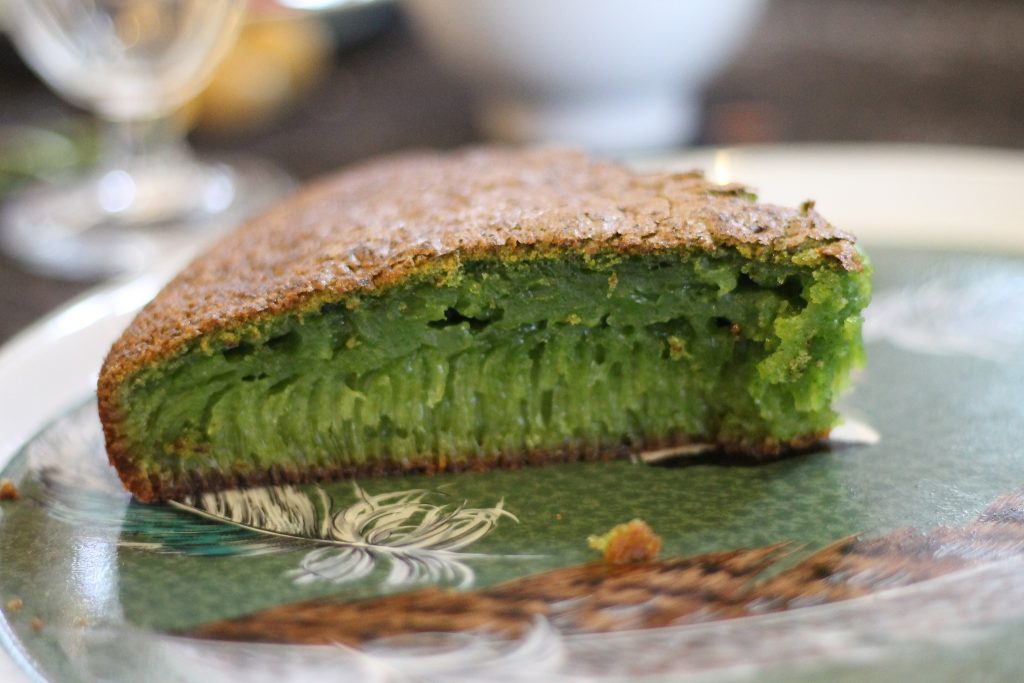 This Vietnamese green cake is indeed a delight, and it, therefore, comes as no surprise that you would be willing to learn how to make it. I will be honest with you though that the process can be quite challenging at first and it will take some time before you finally get it right. However, I have listed some tricks that will make it easy for you.

The key to making the perfect honeycomb cake lies in achieving the vertical lines such that when one slices the banh bo nuong, they can see the air bubbles. Any other result would not be a honeycomb cake.

As such, though it can be quite tempting to add a personal touch to a recipe, I advise you to follow the ingredients and steps as stated if you wish to succeed. Substitutions should only come into play when expressly asserted.

I find that it is best to give you the guidelines before getting into what you need as this will better prepare you for the tasks ahead. Kindly note that these are not suggestions; but instead, they are the things that you must keep in mind during the entire process.

When it comes to baking powder, go for that which is single-acting as opposed to double acting. The difference between the two lies in how they work. Whereas the single-acting option works in moist environments, the double-acting works in both hot and wet environments. Most of the options that you will find in stores have double-acting mechanisms, and they will not work great for this recipe. 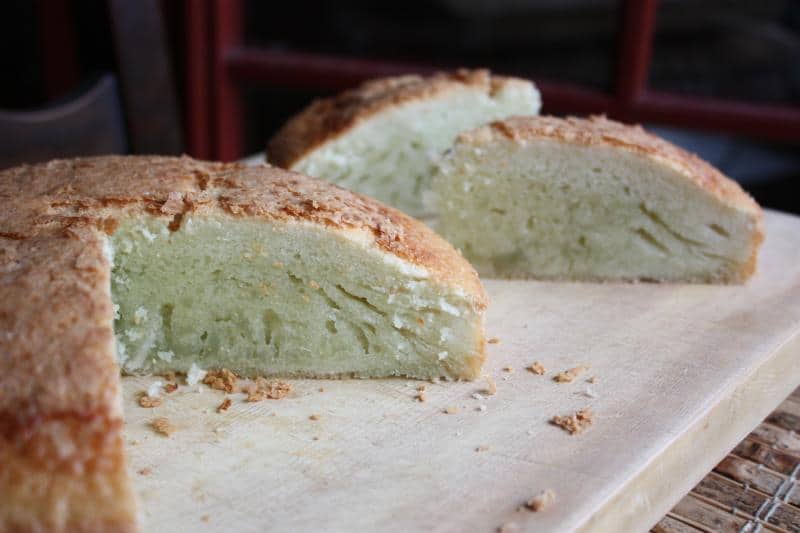 The thing with this honeycomb cake is that it rises in the oven but once it cools, it becomes flat, and this can be very disappointing. However, do not let the lack of single-acting options get in your way as you can easily make your own with two readily available ingredients: cream of tartar and baking soda.

You will also need a great deal of patience to be successful in making this Vietnamese sponge cake. The first few times I tried this recipe, the results were not all that satisfactory, and I have heard people claim the same over their tries. As such, be sure to buy lots of eggs and tapioca starch as the chances are high that you will be redoing this a few times. And one thing about the eggs; go big. This recipe calls for large eggs, and small sizes won’t work.

Coconut milk is one of the key ingredients in making honeycomb cake although some recipes call for water. Coconut milk adds flavor as well as aroma to the cakes and is hence a great option. The cakes turn out sweet, and you can adjust the sugar to your liking.

When making your baking powder, it is essential for the baking soda that you use to be valid. It could be that you have not baked in a while and it is quite easy to end up using expired baking soda. Be sure to check the expiry date before beginning the baking. Once you add your baking powder to the batter, you should not dilly-dally as the activation has started and this will affect your results.

The best pan option for this recipe is a 9-inch size. A smaller pan will help you get a thicker cake while a larger one will result in a flat cake. If you want something in the middle, this is the way to go.

Place the pan in the oven and set the oven to pre-heat at 325 degrees Fahrenheit. Failure to preheat an oven before baking means that the interior is not hot enough to bake the cake and this not only prolongs the cooking time but it also affects the results. 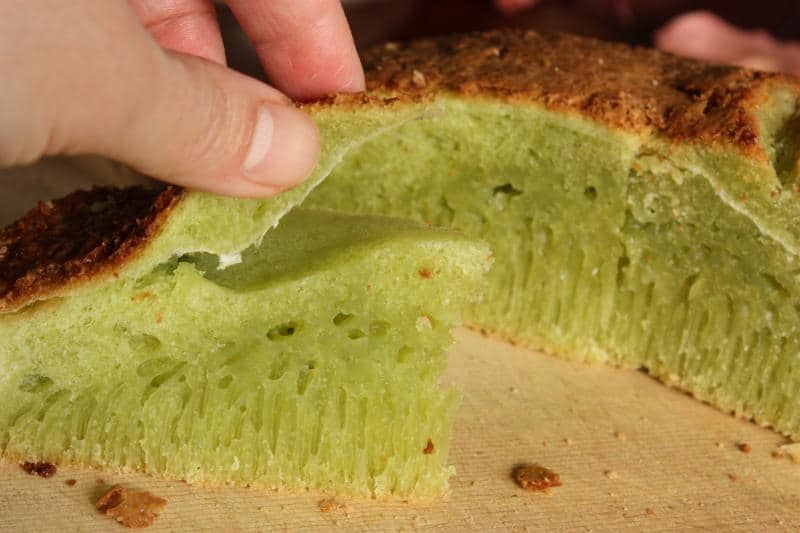 Place a small saucepan over low to medium heat and in it; add the sugar, water, and milk. Keep stirring until all the components dissolve. Remove the pan from the heat and keep the mixture in a place where it can cool down to room temperature.

In another bowl, sift in the rice flour and the tapioca starch. This process not only aids in getting rid of unwanted large particles but it also adds air into the rice flour, thus increasing your chances of achieving air bubbles. As such, you can opt to sift the flour more than once for best results.

If you could not get single-acting powder, combine the baking soda and cream of tartar in a bowl, and this will be a great alternative to the same. Kindly note; that these two ingredients will not play a part in this recipe if you already have a single-acting option. Instead, you will substitute the two with baking powder of equivalent amounts.

Get hold of a big bowl and in it, add the vanilla extract, the eggs, and the oil. It is essential that you do not introduce air to this mixture. As such, gently whisk all the components together until evenly combined and avoid whipping or beating the eggs.

From here, add the cooled coconut syrup to the egg mixture and continue whisking the ingredients. Add half of the sifted flour and combine the ingredients until they are almost evenly combined. At this stage, add the rest of the flour and continue gently whisking the components until the combine. This process takes time as the mixture is quite lumpy in the beginning. In three to five minutes of gentle whisking, the lumps will dissolve. Add some pandan paste to the mix and combine the ingredients. 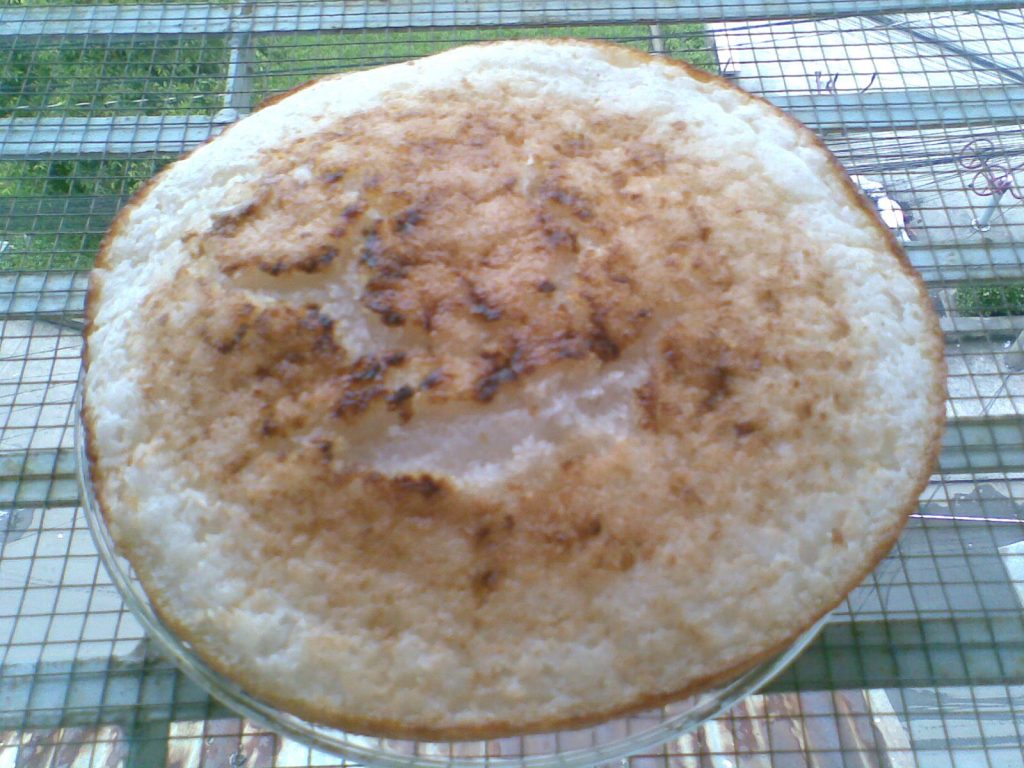 Add the baking powder to the batter and mix for about a minute to allow for even combination. You will notice that the dough will react with the powder, resulting in a foamy substance.

However, this should not worry you as it is part of the process.

Remove the baking pan from the oven and spray it with non-stick cooking spray before straining the batter in the pan. If there are any lumps left, break them down and add them to the mixture before placing the baking pan in the oven for thirty minutes. From here, commence checking for doneness with a toothpick. As is the case with all cakes, if the toothpick comes out clean, your cake is ready.

Remove the cake from the oven and allow it to cool before you start serving. If any of the honeycomb cake remains, you can store it outside the fridge for one to two days. If you are using a refrigerator, this Vietnamese green dessert will be good for a week, and you can warm it up before enjoying it. 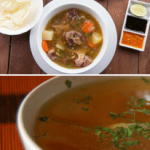 Ways to Use Beef Bouillon Granules in Your Cooking 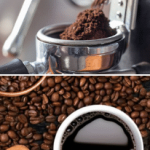