Barbecue is an ancient art form. It’s thought to be one of the oldest forms of cooking, with its roots stretching back thousands of years. Whether this is true or not, it certainly predates microwaving by at least a few decades.

This culinary seniority doesn’t make it any easier, however. Instead, the simple tools and primitive methods you tend to use while you cook a brisket can actually make things harder. If you don’t use the proper steps and techniques, it’s easy to turn a succulent cut of meat into something tough, chewy, and unappetizing.
If you need help telling when your brisket is done or you’d like some extra tips to elevate your barbecue skills, we’ve got you covered. These top tips will help you produce savory, tender brisket with a minimum of effort. 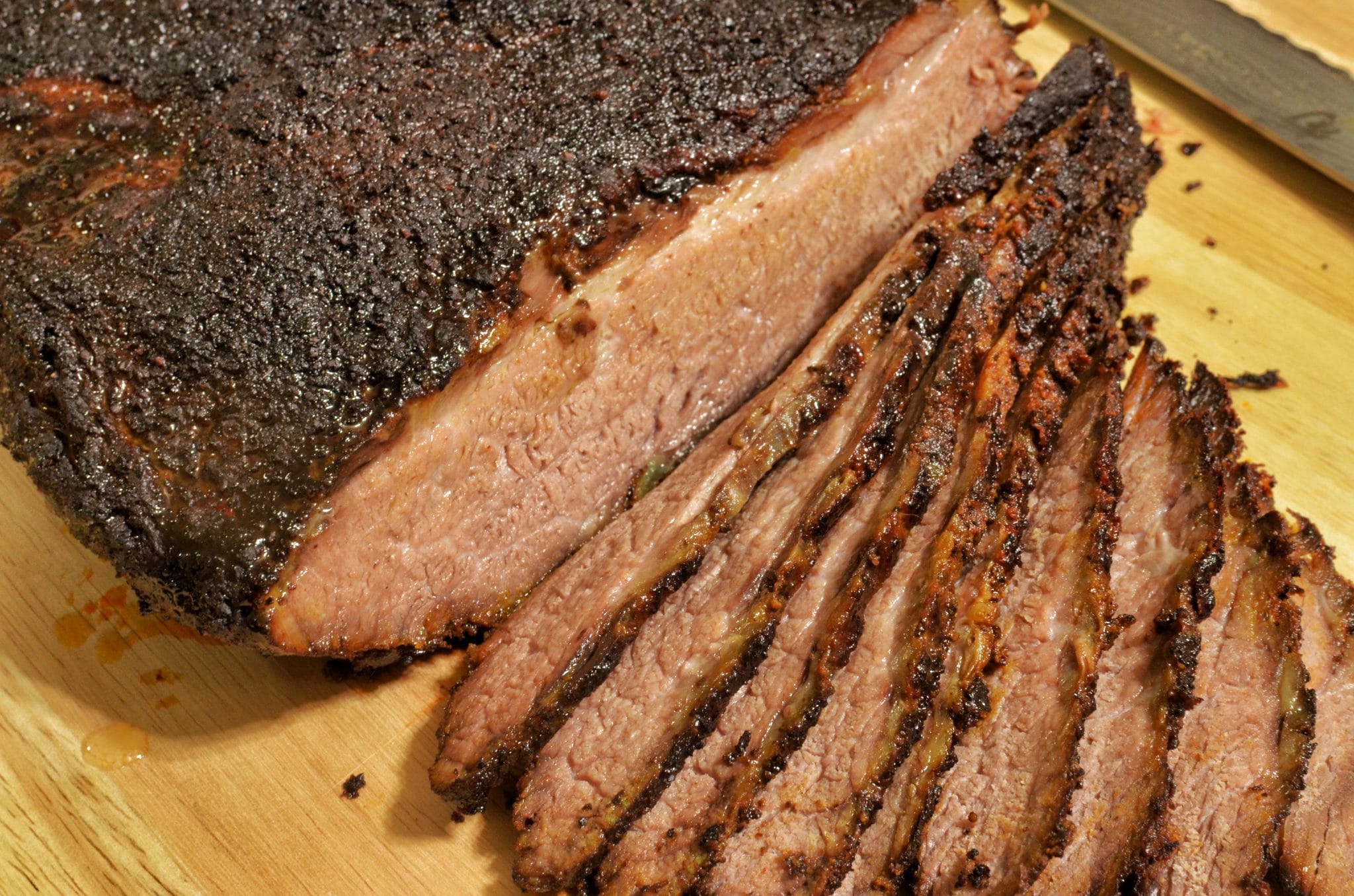 1. Use At Least One Thermometer

Even though I just called BBQ an “art” above, it’s got quite a few things in common with science. Using the right measuring tools and keeping things precise will go a long way towards improving your cooking.
With brisket, this means you want an instant-read thermometer. Stick it in the middle of your brisket and check the internal temperature. So when is brisket done? There’s a pretty big range of acceptable temperatures for brisket, with most cuts needing an internal temp of between 195 and 215. If you’re in that range you’re probably good. 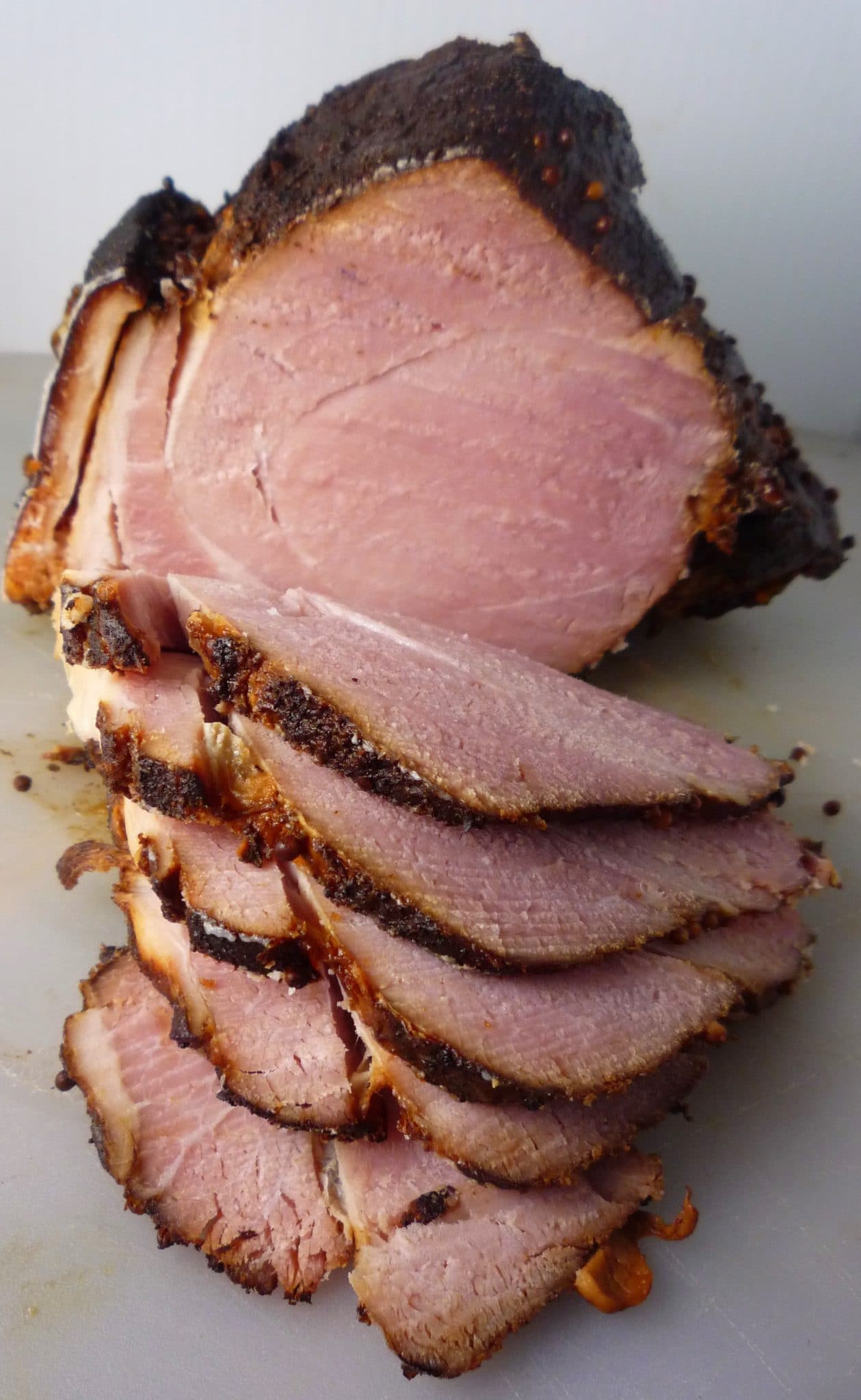 Now, that said, brisket isn’t steak. It’s an entirely different beast. The exact cut of brisket you’re cooking, the thickness, and how you’re cooking it will all play a role in determining the exact internal temperature that you want. In other words, 215 may be too low in some cases, while 195 may be too high in others. Generally speaking, if you’re cooking your meat over lower heat for a long time, it’s more acceptable to have a temperature at the lower end of this range.
When you get a bit more serious, consider getting a grill thermometer to measure the temperature of your grill or smoker. Managing the heat in your cooking environment will ensure that you cook consistent meats from one session to the next. With a bit of experience, a grill thermometer can be even more helpful than a probe thermometer at letting you know when your meat should be done.

Even if you don’t have a thermometer at all, the so-called “probe test” is a great way to test your brisket. Simply poke your meat with a knife or another sharp object. If you get basically no resistance your brisket is done.
Use some moderation with this test, of course. While you won’t ruin the flavor of your brisket if you stab it preemptively a few times, you will let out some of the heat that’s built up in your smoker (or oven or grill). Try to reserve this test for the later stages of cooking so that your brisket gets as much undisturbed cooking time as possible.
And yes, I am quite sure that poking meat doesn’t impact the flavor. Test it for yourself — buy two briskets, enthusiastically performate one brisket with a fork, then cook them both side-by-side. You won’t notice much of a difference at all.

Just like with steak, the brisket temperature done-ness is achieved at isn’t the temperature you want to serve it at. It’s important to remove your brisket from the grill, oven, or smoker and let it sit for a few minutes to help things even out. This will allow the inside to continue cooking while the outside cools off.
Professional cooks tend to rest brisket by wrapping it in paper or foil. You can do either (or both) at home if you’d like, but you can simply throw it in a cooler instead. This has a slightly different effect on the brisket since the insulation creates an environment where your brisket will cook itself for a bit longer. It’s a great way to add a little bit of extra tenderness to your brisket without any extra work. 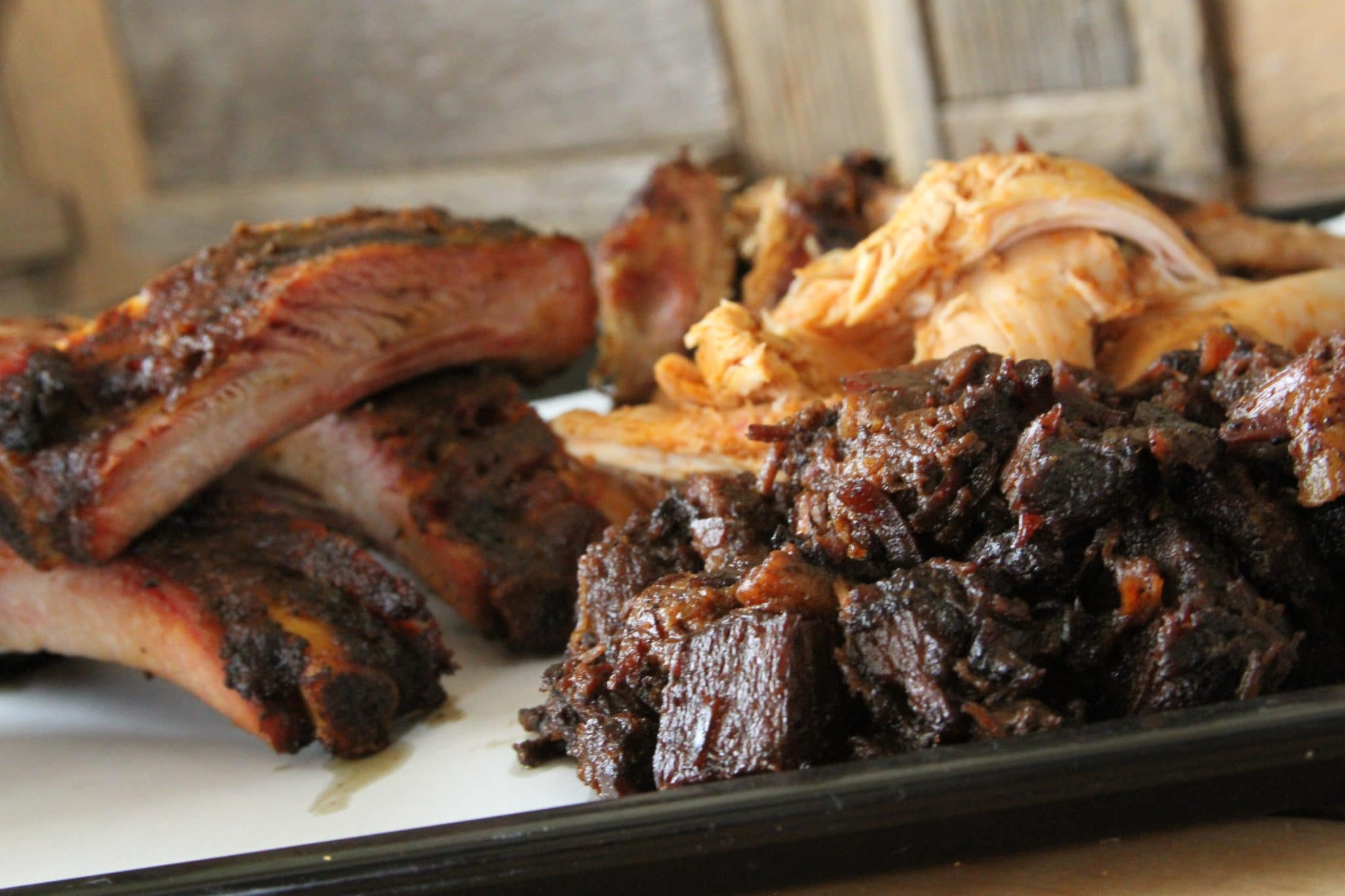 Remember how I said cooking was a science earlier? Science is all about doing something, observing the results, and then doing it again slightly differently. Cooking is no different. In order to become a brisket expert, you’ll have to cook quite a few briskets while varying cook time, cook temperature, seasoning, the exact cut of meat, and other factors.
This shouldn’t sound hard. Instead, it should sound delicious! The point of this process is to have fun while you find out what effects these factors have on the finished product. You’ll learn a lot about barbecue along the way. You’ll also build up a fantastic set of tasting experiences that you can use to figure out exactly how you like your brisket.
One important thing to note: not every brisket during this process will turn out great. Some will be mediocre. Others may even be inedible. This isn’t a problem. Instead, you’ll learn from these mistakes and find out what to avoid when cooking your brisket in the future.
Now that we’ve got the basic tips out of the way, here are a few other questions that people ask with regards to brisket.

Is All Brisket The Same?

No.
Brisket can refer to one of several related cuts of meat. The one you’re usually looking for when you barbecue is called “packer cut.” It’s a big, two-muscle piece of meat with a fat cap still attached. Proper brisket is always over 10 pounds before you trim it. You can still cook the other stuff, of course, but it won’t be quite the same.
The other common type of “brisket” is lean and flat. It’s usually used in pot roast. While you can still slow cook it, you’ll get worse results due to the lack of fat. 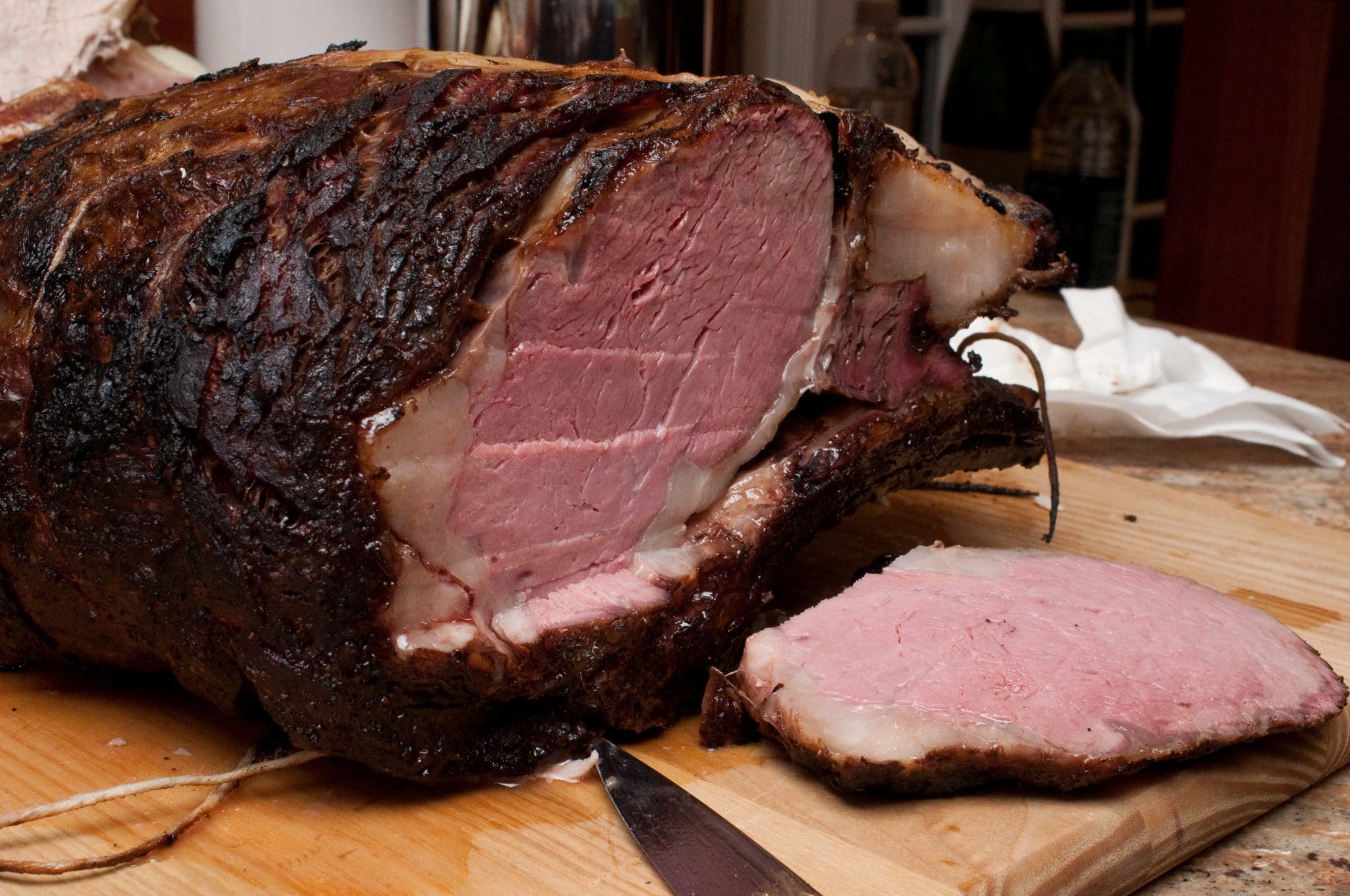 Marbling is the appearance of fat mixed into a cut of meat. Marbled cuts are very attractive (due to the even mixture of white fat in with red meat) and fairly expensive. When it comes to cooking, however, you usually want the most marbled cut you can afford.

The reason for this is simple: when you cook meat, the fat melts and adds flavor to the surrounding meat. Brisket with lots of marbling has lots of natural fat mixed in all throughout the meat, meaning that every bite will be full of succulent flavor.
Leaner cuts will have less fat in fewer places. They can still taste good, of course, but you’ll have to be more careful when you cook them and you may not get quite the flavor you want.

How Should I Season My Brisket?

Cooks all over the world season their briskets differently. You’re free to subscribe to any of their seasoning methods. This might include peppers, spices, pickle juice, mustard, or even liquid smoke.
Regardless of which of these additives you use, the base of your seasoning will be plain old salt and pepper. Be sure to use LOTS of salt. While it’s possible to over-salt a brisket, it takes quite a bit of deliberate effort. You’re unlikely to over-salt a brisket unless you really try. 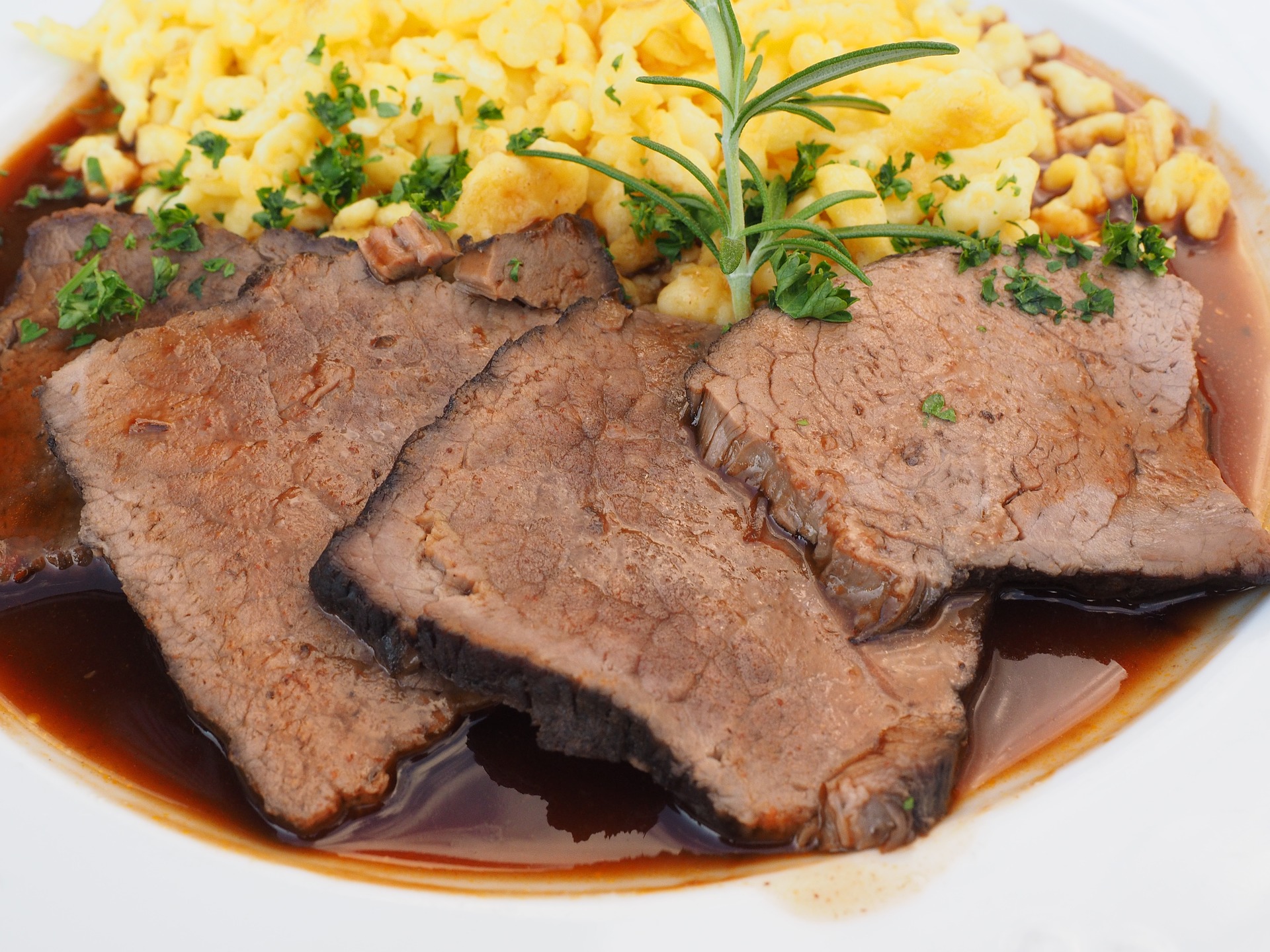 For me, the most important flavoring is the wood that I use to smoke my brisket. As it cooks, the smoke from the wood condenses and drips down onto the meat, giving it a nice smoky flavor. Different hardwoods have slightly different smoke flavors, meaning that you can customize your brisket to your liking. I’m a fan of hickory these days, although oak and mesquite smoke are also popular.
In order to get this smoke flavor without an actual hardwood smoker, try using liquid smoke, smoked spices, or even bacon. All three of these products were smoked by someone else, meaning that the flavors you’ll get are fairly “authentic.”
Liquid smoke is simply the collected condensation from someone else’s smoker, while smoked spices (like smoked paprika) and bacon were placed in a smoker to give them their distinctive flavor. You can use these to season (or accent) your brisket in order to pass that flavor along to your cooking.

The tips above will help you tell when your smoked brisket is done. Be sure to check the internal temperature of your brisket, use the probe test, and then rest your brisket for a few minutes once it’s done. If you’re still having trouble, make sure you’ve selected the right cut of meat and that you’ve seasoned it properly. A little bit of extra salt can sometimes be the difference between a bland brisket and one that’s so delicious you’ll remember it for weeks.
5 / 5 ( 27 votes )