Some of the world’s most popular and beloved noodles are from Asia, including the Japanese noodle.

Asia is home to a wide variety of noodle dishes, while Chinese and Japanese noodle dishes always seem to stand out at the forefront.

Made with the best condiments and seasoning, these noodles are tasty and flavorful. They are quite filling and could serve as dinner any day. 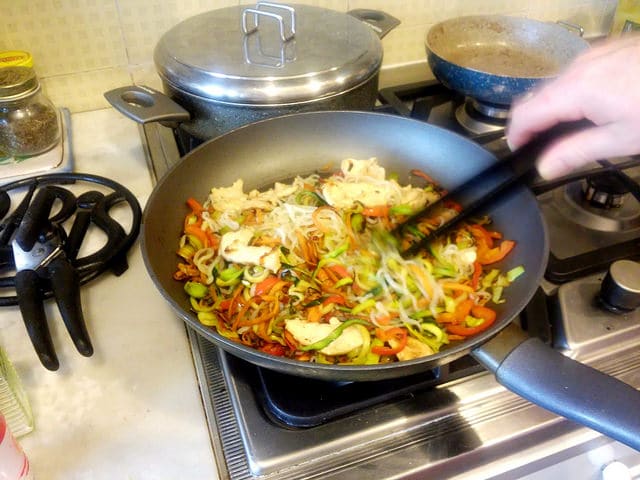 You can eat them for lunch too, and if you like, breakfast—a refreshing meal to start the day. And also, it doesn’t matter if the weather is hot or cold, summer or winter, because there are cold Japanese noodles as well as Japanese hot noodles for all seasons!

What’s more is that these dishes could be made strictly vegetarian if you so desire, and still smell and taste great. I’m suddenly feeling hungry, are you?

There are so many types of Japanese noodles and they’re very distinct from each other in texture, appearance, shape, size, and even taste.

While some of these noodles will be strange to you, especially if you haven’t been eating enough noodles at that Japanese restaurant down the street, a few should definitely ring a bell, like ramen, yakisoba, and udon. If they don’t, then welcome to Japanese noodles 101—your specially-designed introductory class. 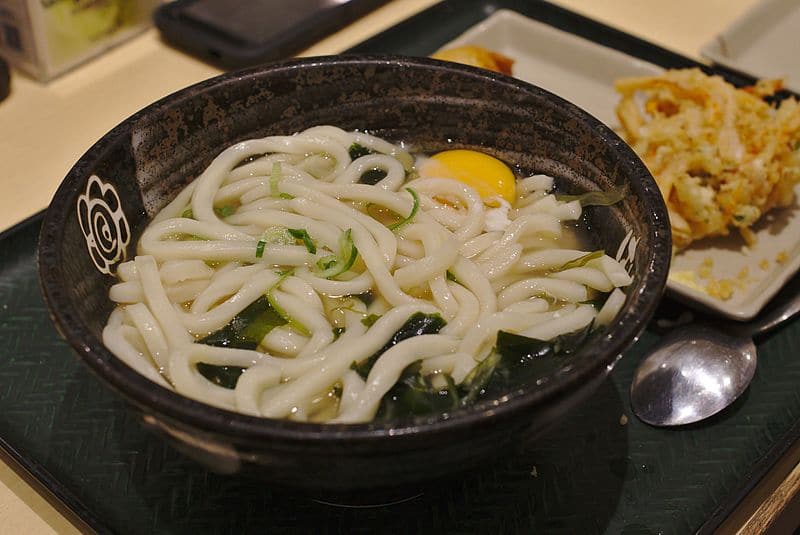 Udon noodles are made from wheat flour and are really thick, white noodles, perhaps the thickest of all Japanese noodles. They can be served chilled during the summer season along with a dipping sauce.

They can additionally be incorporated into hot dishes and soups where their chewy texture is also very appreciated. Thus, they are useful both during the hot summer months and the cold winter months. Practically speaking, they can be eaten all year round. Common dishes made with udon include:

The famous dish sara udon, though bearing the udon suffix, is actually made with a different type of crispy noodle.

Udon generally comes as both dried udon or precooked udon. Hence, before buying, read the label. Precooked udon is easier and faster to make, and it’s also mainly used in recipes that call for stir-fries or barbecued noodles. Dried udon, on the other hand, will take a longer time to prepare and is best suited for simmering or boiling. 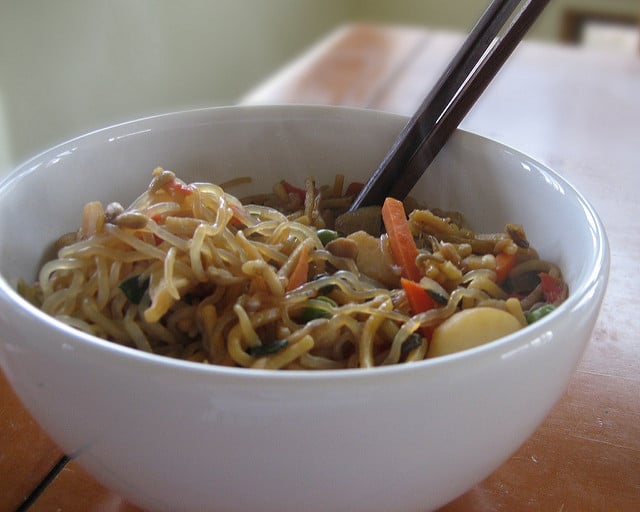 Made from the konnyaku (konjac or devil’s tongue yam), these are extremely low in carbohydrates and calories, though by themselves they offer little in terms of flavor. They are thin, clear, gelatinous, and chewy, preferably used in dishes needing texture, like sukiyaki.

Shirataki noodles are also known as ito konnyaku, or yam noodles, among a few other names. They are of two types: the dry shirataki and the soft shirataki, which is usually sold in liquid. Soup stock and sauce are two ways by which the noodle is commonly enjoyed.

Ramen is both a noodle dish and a type of noodle itself. The dish is made using the ramen noodle. Though originally from China, this noodle has become part of the Japanese cuisine after its introduction many years ago.

Ramen is made with wheat flour, salt, water, and kansui. Ramen is considered one of the Japanese egg noodles since it contains whole eggs. The noodles are thin and usually long with varying shapes and a firm texture. They are slightly yellow in color and usually served in broth. Some common ramen dishes are: 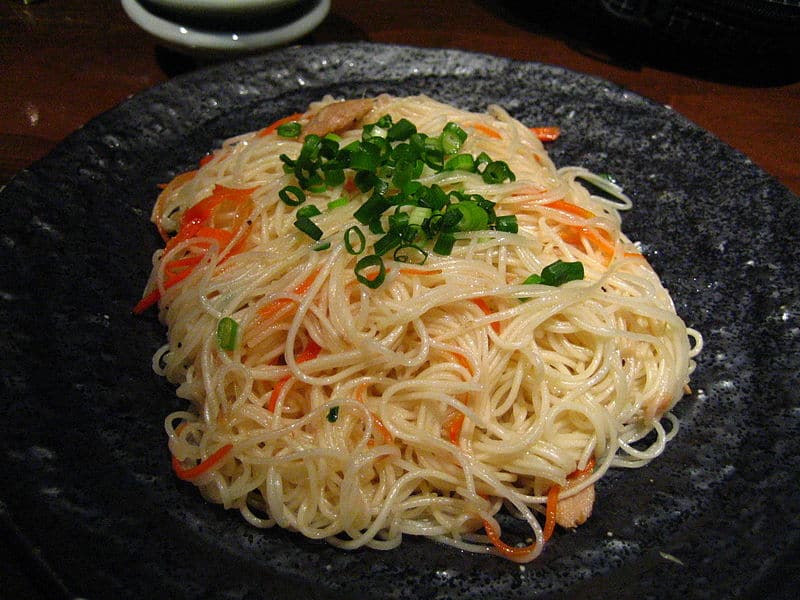 Here’s another noodle made from wheat flour. If not for their thinness (1.3mm in width), these could easily be mistaken for udon or hiyamugi noodles.

They are usually served as a cold Japanese noodle along with dashi dipping sauce, though sometimes with soy sauce, during summer. They can also be served with tsuyu—a sauce with Japanese bunching onion—ginger, or myoga.

Apart from a summer snack, these noodles can be made into hot soups and are called nyumen when this is the case. The origin of the dish is not yet certain, it is credited as both a Chinese and Japanese noodle, however, it features prominently in Korean cuisine too.

Though usually white in color, a few other colors have been spotted, although these colored somen are more common in Korean cuisine.

These are usually white in color too, but it’s no surprise to encounter slightly pink or brown hiyamugi. The wheat flour noodles are a lot like the somen and the udon; the noodles of this trio are most times distinguished on the grounds of size. The smallest are somen, udon are the biggest, and hiyamugi fit comfortably in the middle of it all.

Another important difference between somen and hiyamugi is that hiyamugi noodles are sliced by a knife to get the right size, while somen noodles are made by stretching the dough. 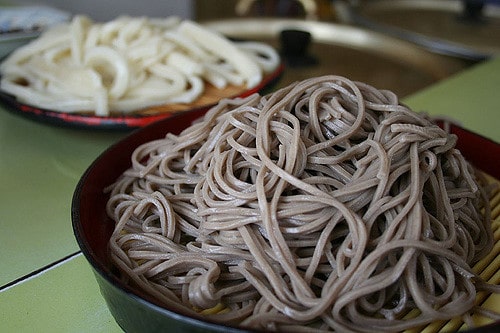 These noodles are not made primarily from wheat flour, though it could be added to the primary flour used—buckwheat. They serve a dual purpose too, as they can be made into hot broths or chilled with a dipping sauce, and sold either fresh or dried.

Note: Yakisoba, the very popular and delicious Japanese noodle dish, is not made with soba as the name implies; it is made with a chukamen, a Chinese-style noodle.

Other types of Japanese noodles are:

9 of the Best Japanese Noodle Dishes 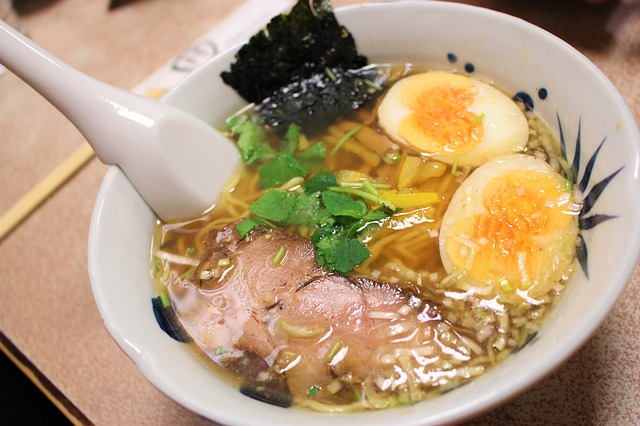 Some have already been mentioned while talking about the different types of Japanese noodles. Some of the dishes might be simply referred to as the type of noodle they are made with. For example, the Japanese curly noodles, also known as ramen, are technically a type of noodle, but the name is commonly used to refer to any type of dish made with ramen.

If you just started your journey into the world of Japanese noodles, the following are a few delicious dishes you SHOULD start with:

These are just a few dishes of many you could make right at home!

Japanese noodles were originally never served cold; they were only served hot. However, local diners realized that during the summer months, they made very little in sales. Most of their customers would stop coming in to eat delicious noodles. Thus, they decided to create noodle dishes that could be eaten during the hot weather.

After many attempts, cold noodles were made. These noodles are always served with a dipping sauce, which could be a basic sauce or a classic one like tsuyu sauce. Here are some of the best chilled-noodles to order during summer:

The Right Way to Eat Noodles

While we all love eating noodles, they can serve as a great challenge to pick up, especially when you’re unskilled with chopsticks. With a fork, we can always find a way to be in charge of the slurpy noodles. So, if you’re yet to master the art of using chopsticks, make do with a fork.

If you ordered some type of soup noodle, a spoon will most likely come along with it. Use the spoon to drink up the soup, but not to eat the noodles. You can also drink the soup out of the bowl, it’s acceptable.

For those who love making slurping sounds when eating their noodles, you can do so without judgment while eating these Japanese dishes. Slurping in Japan shows that you’re truly enjoying the dish, so slurp on.

The best way of knowing how to eat any of these Japanese noodle dishes is to have a bowl right in front of you. That’s a start, and later you can follow the rest of the advice as you have more bowls. But for now, enjoy! 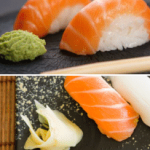 Wasabi and Ginger: How to Use Them Together The Right Way 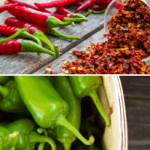 Flare Up the Spice with the Pepperoncini Peppers