A unique dish found in East Asian cuisine, is jelly dishes and drinks made from the gel substance harvested from the seeds, leaves, and stems of certain plants. One such dish found most commonly in Taiwan, is ai yu jelly. The common name for the delicacy in Taiwan is Ogio and also known as ice jelly. Although this dish is not commonly found in other parts of the world, it can sometimes be found in areas where there is a large China town or areas where specific Asian cuisine is found.

This dish is traditionally served with a slice of lime for accent, and can also be served with other fruits to add a depth of flavor. If you are unfamiliar with this Asian specialty, then keep reading as I explore the complexities and methods of making this traditional jelly fig seed dish.

In addition to aiyu jelly, there is another popular plant-based jelly dish that is quite common across several Asian countries and is making its way onto the worldwide radar. It is known by its common name grass jelly but can have many different names depending on where it in the world it is found. Both types of jelly dishes can be found as drinks too.

The jellies themselves have distinct flavors but combined with other fruits, citrus, and sugar, they become a refreshing treat. 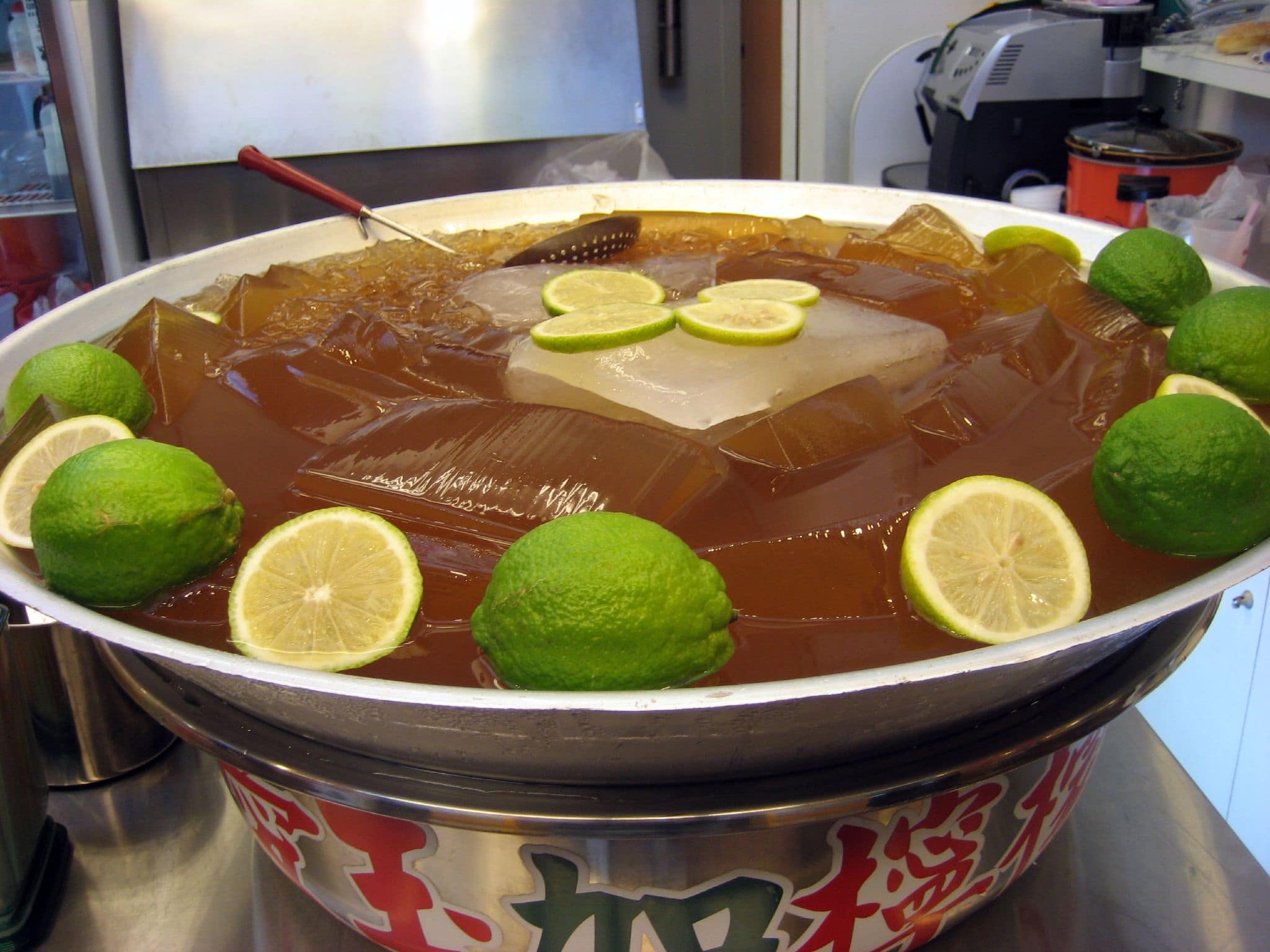 This specialty dish can not only be found in Taiwan but is also popular in Singapore. It has also found in some stores in Malaysia that specialize in Japanese foods.

It is most commonly found in Malaysia in the town of Ipoh.

The dish itself is believed to be discovered by accident when a Taiwanese businessman discovered a type jelly in a stream of water he drank from. Upon tasting this jelly he discovered he felt more refreshed and noticed some nearby fruits on trees that had dropped into the water.

He opened the fruit to discover that the seeds produced a gel when they were pressed. He decided to prepare the jelly as a beverage and later a snack. The successful business venture was named after his daughter Aiyu, as well as the plant and vines themselves. The legend states that he became a very wealthy man as a result of his accidental discovery. 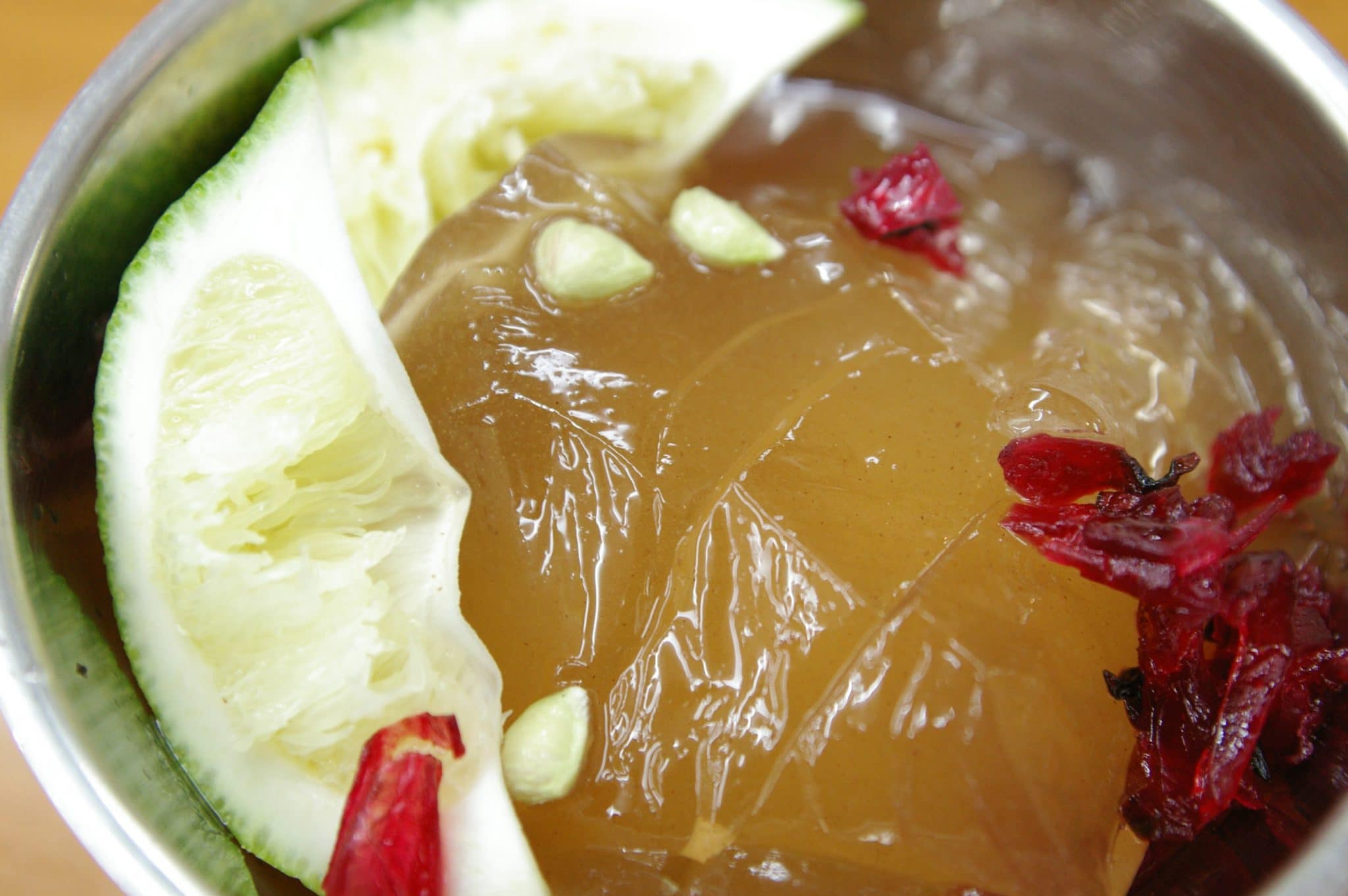 There are also other similar versions of this substance used in creating specialty dishes in Europe. For example, there is an Austronesian dish named igos that is very similar. This is also true in Spain, where they have a jelly dish called higo.

This goes to show that the concept of plant-based jelly dishes isn’t limited to a certain part of the world, but tends to be more culturally significant and popular in certain areas of Asia today. For example, a similar jelly dish in an Asian country may be served fairly plain accompanying some type of citrus or fruit, while it may be completely incorporated into a savory dish in another country with a different culture.

The process of extracting the jell from the aiyu seeds of the fig fruit is simple. The seeds are placed in a porous sack and then submerged in cold water. The seeds are then rubbed until they secrete the jelly and it is then collected and flavors are added. It may either be heated or served without the use of heat. It can be thickened and molded to a desired shape and consistency. It is usually sliced into squares or into serving sizes. 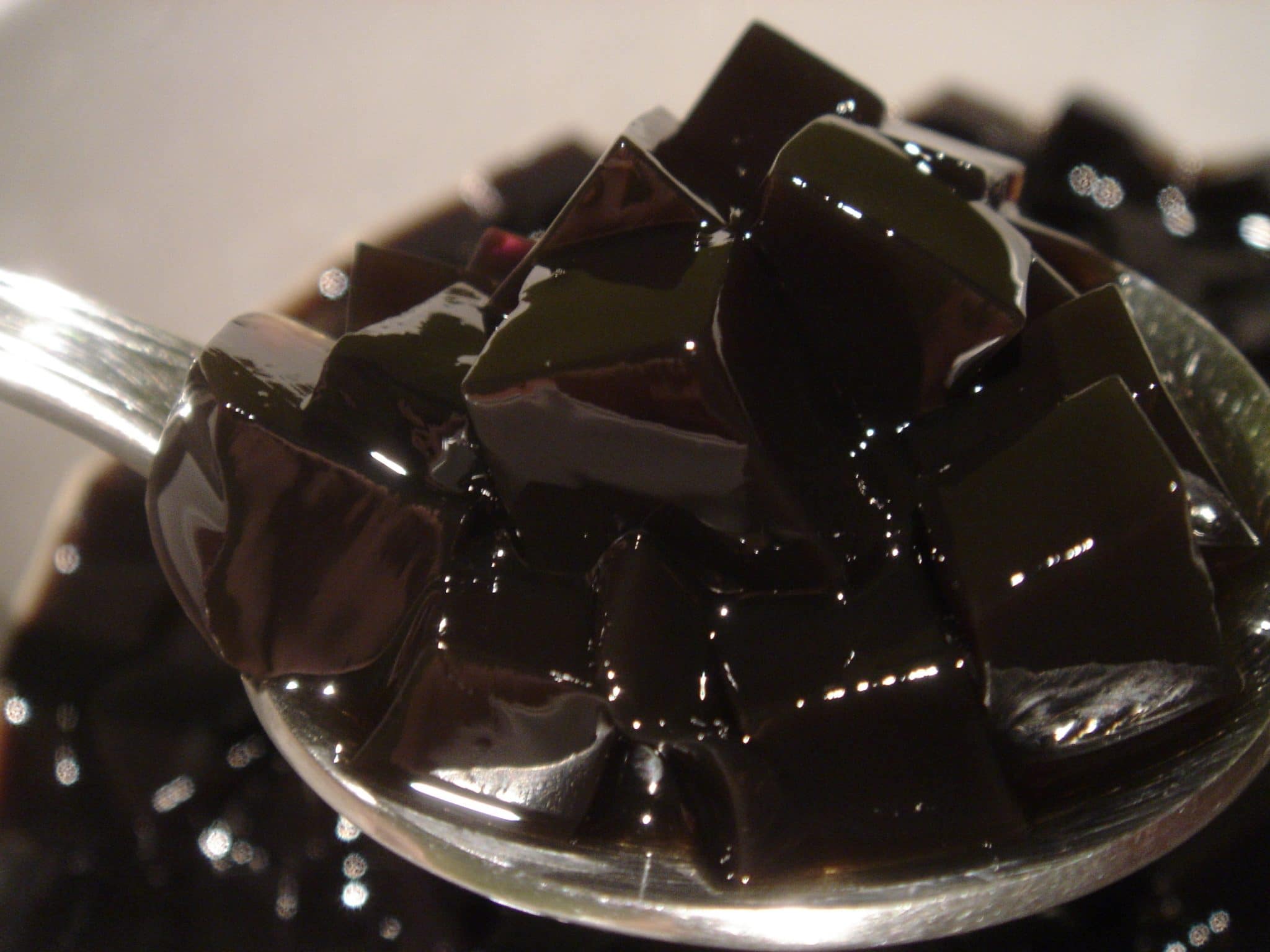 Grass jelly is another Asian delicacy similar to fig seed jelly. Grass jelly is made from the leaves and stalks of the Platostoma palustre or mesona chinensis and is part of the mint family. Growing in the wild, this grass-like plant gives no hint of its capability to produce such a delicious and versatile product that has become economically significant in many of the Asian countries where it is commonly served.

In order to achieve the right consistency, this plant is mixed with potassium carbonate. Oxidation of the plant is allowed to occur before it can be processed to help give it a special flavor. Once the jelly sets it is then chilled and cut into cubes. It can be mixed with a special syrup to create a popular drink.

There are several different versions of this jelly.

Some of these versions call for the mixture to be cooked while others can be served without the assistance of heat. Not only is this jelly versatile when it comes to using it in dishes and drinks, but it can be mixed with a variety of flavors to easily create a tasty and refreshing snack. For instance, some of the most common flavors that are mixed with the jelly and can include melon and guava. 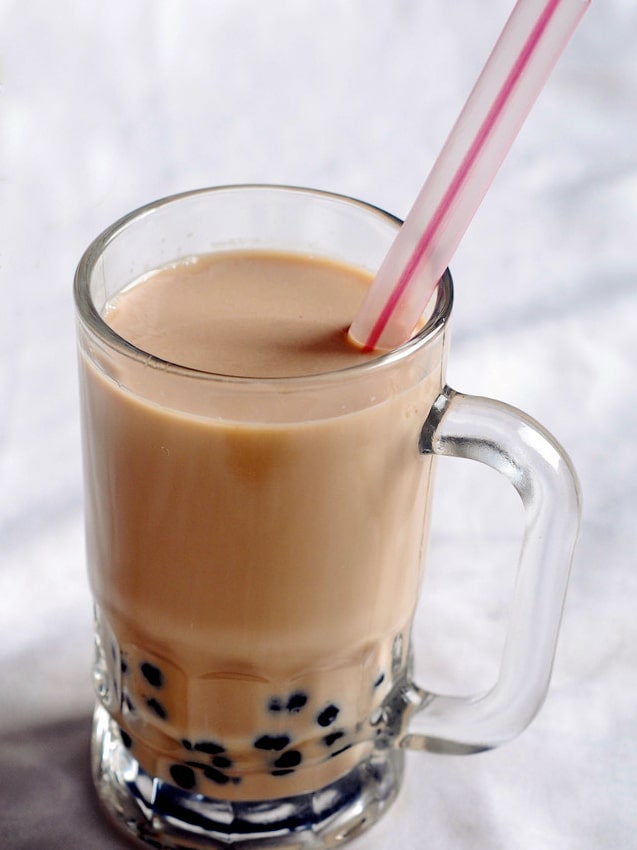 Grass jelly is known as cincau in Indonesia. Grass jelly can be made using a few varieties of plants growing in Indonesia. The process is slightly different than the version you find in mainland China. Additional mixing processes and temperatures create a different product with a smoky flavor. Some of the ingredients used to create distinct flavors include a coconut milk variety of syrups and sugars in addition to the starch which gives it a thicker texture.

Common preparations call for the mixture to be cooled and then cut into rectangular pieces or squares. These types of squares tend to be very dark brown or colored with additives to give the jelly a black appearance.

One of the most common ways to find grass jelly at a restaurant near you is in the popular drink bubble tea. Some bubble tea is made with grass jelly and the bubble tea’s jelly balls, or boba is mixed with the specially blended tea and a milk mixture. In fact, this drink is so popular in the United States, you can find it in almost every city across the country.

In Vietnam, there is also a version of grass jelly which is similar to its Indonesian counterpart, but they also have another variety of grass jelly which is made with different types of algae. The people of Vietnam, especially enjoy eating sweetened grass jelly in the summertime as a refreshing treat. They also blend it with other juices and sugars to make a smoothie-like beverage. In the Philippines, grass jelly is allowed to set and cut into squares and served with a touch of brown sugar. It is a simple, yet refined desert that is loved by many in the islands.

Each Asian country has their own special version of plant-based jelly dishes and drinks that range from simple flavors to exotic combinations you wouldn’t expect. What makes each version special is the flavors native to their areas and the preferences of the palettes of the inhabitants. It is amazing how a simple plant jelly dish can vary so greatly in presentation, color, flavor, and texture. If you already have a preference for a particular type of Asian food, it may be safe to say that you would likely prefer that culture’s presentation and flavors used to make grass jelly dishes and desserts. 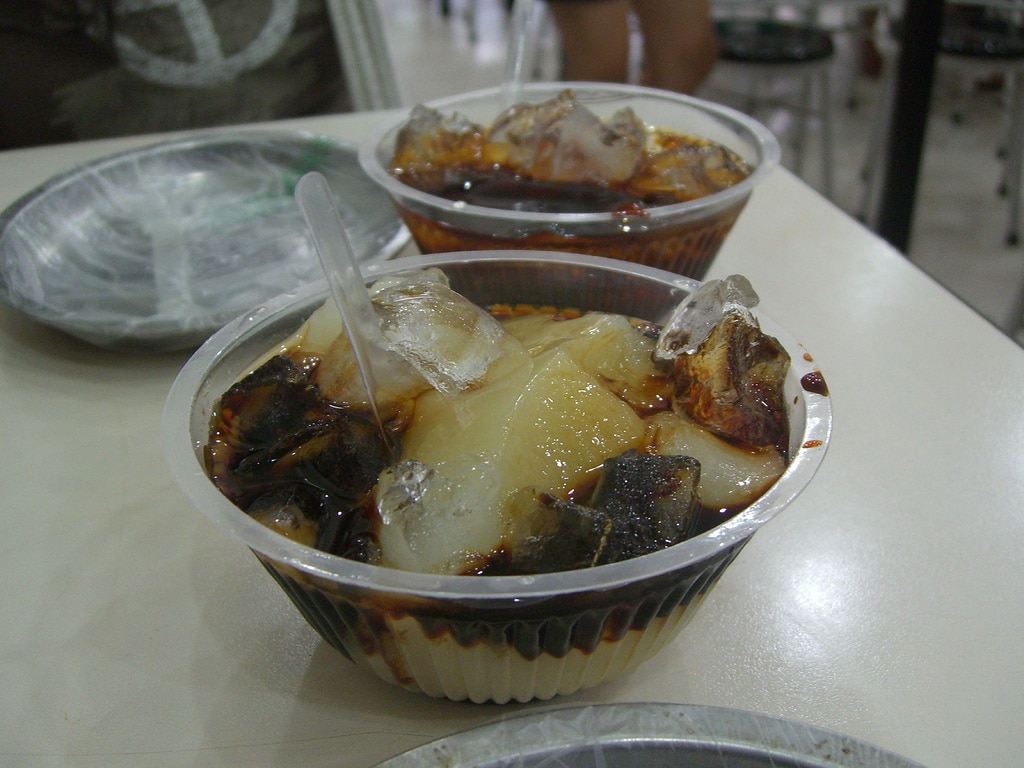 You may have encountered either aiyu jelly or grass jelly at some point in your life. You may have just read this article that seemed to cover an exotic dish you only thought you hadn’t experienced yet, only to realize you had it in a bubble tea, or other preparation while you were at a restaurant or an Asian market. I was surprised to discover that I had actually enjoyed grass jelly on more than one occasion but didn’t realize what it was at the time.

The flavors and dishes that rely on this plant-based jelly concept can range from the simple version like they served predominantly in the Philippines, or can be part of a complex fruit dessert or drink with several ingredients. Its range of preparations may fool you and prevent you from realizing what you are enjoying especially if it is blended with several other complex flavors or savory dish.

Hopefully, this information has piqued your interest and made you want to sample some of the versions available in your area. If you aren’t able to go to a local Asian market or restaurant that has these unique treats and dishes, they are available online through large online retailers such as Amazon.

Of course, it will be much harder to find the Aiyu jelly, but if you have a large population of Chinese people in or around your area, you may get lucky. I would urge you to try either jelly fig seed dishes or grass jelly because honestly, you may discover something new and exciting to add to your list of new and exciting dishes from around the world.

There are just too many delicious flavors out there to limit yourself, especially with something that can be so versatile and diverse. Keep in mind that just because you may not like it the first time you try it, you may like it if you try it prepared in another fashion. It may also come down to who and how it’s made. 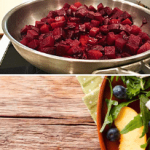 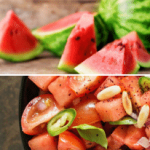 Love watermelons? Find out how to tell if a watermelon is ripe