There are some essentials you need to have with you on a cold, windy night: a blanket, a scary book and udon and tempura. Udon is one of those meals that you have that just tend to make you feel good about yourself and life in general. It’s soupy, it’s slurpy and it’s filling. What’s not to like?

But you probably already know how great udon is. I’m here to talk about kakiage udon, another one of the many wonderful ways to eat udon. For the benefit of those that do not know, I’ll talk a bit about udon first.

Udon is a type of noodle that is made from wheat flour that is used very widely in Japanese cuisine. It is most commonly served hot as a noodle soup known as kake udon but can also be served chilled, and in this format it is called zaru udon. This makes udon perfect for a cold winter night or a humid summer day.

Udon can also be served in a mildly flavored broth called kakejiru and topped with thinly chopped scallions, tempura (could be prawn or kakiage), aburaage and fish cake. The flavor of the toppings and broth used differ according to region.

The origins of udon are not quite clear. Some people believe that in AD 1241, a Rinzai monk by the name of Enni introduced flour milling technology from Song Chiba to Japan. As a result, floured crops were then made into pancakes and noodles like udon and soba.

Another group of people believe that udon was introduced to Japan by a Japanese envoy who found themselves in China during the Tang Dynasty. The envoy was exposed to about 14 different types of confectioneries which they took back to their native Japan. Wherever udon came from, we are delighted to have it.

Where can you buy udon noodles?

The noodles are sold dried, fresh or frozen. They are available at any Japanese or Asian grocery store. And if you’re lucky, you might get them at your local grocery store. The dried noodles are quite convenient and handy but the fresh ones have the best texture. And if you can’t find any in your local grocery or any store, you could always order it online. 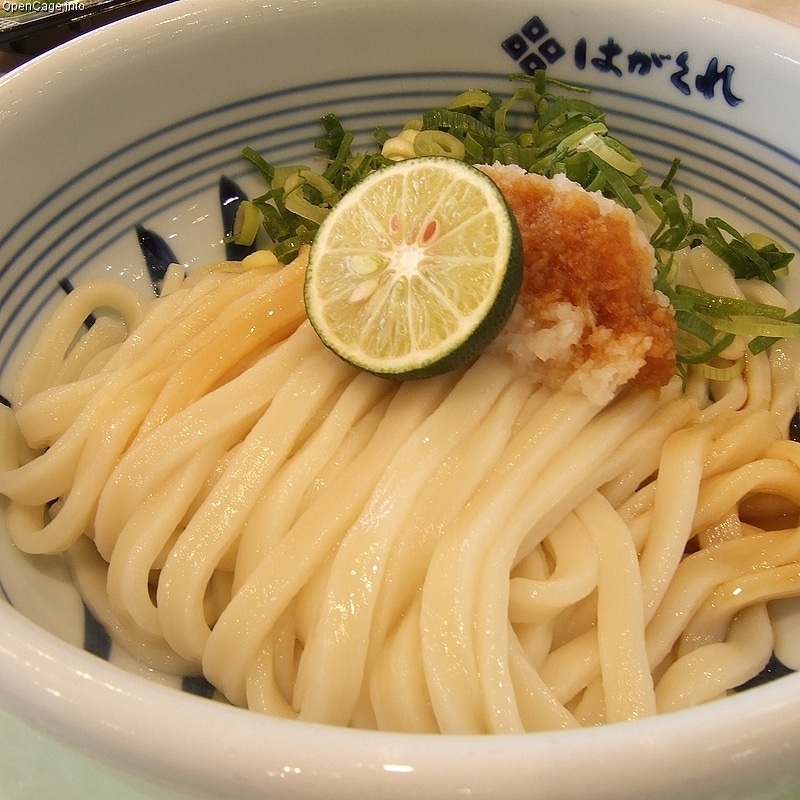 Udon has so many benefits, and it’s super healthy. If you eat udon made from quality wheat flour, you can get a significant amount of complex carbs. Not the fatty kind, the good kind that is high in fiber. Also, because of the fiber, it’s easily digestible. Try it and see if your bowels wouldn’t be happy.

Udon is also rich in crucial B vitamins like Thiamine, Niacin, Riboflavin, and folate. B vitamins are needed by the body to turn carbs into fuel for energy. So with udon, you get to taste, flexibility, health, and satisfaction. Where has udon been all my life!?

Udon is mostly used to make noodle soup, and because it doesn’t melt down or become sloppy (except if overcooked), you can get that solid, soupy, slurpy experience. But it can also be used in a stir fry hibachi style or as a side.

Kakiage is a popular type of tempura in Japan that features a lot of vegetables and seafood; you could call it a vegetable tempura. A tempura is a traditional Japanese dish consisting of sea food or vegetables that have been battered and deep fried.

The batter is made with cold water and wheat flour. Sometimes, eggs, baking soda or powder, starch and oil may be added. Kakiage is different from all the other tempuras because it sometimes features whole eggs. This is great as it gives better consistency and taste to the kakiage.

Kakiage can be made with the vegetables already residing in your fridge or with leftovers from a previous meal, say salad. But usually, kakiage uses vegetables like onions, carrots, burdock root (i.e gobo in Japanese), trefoil, mushrooms, bamboo shoots, bell peppers, broccoli, butternut squash, eggplant,  green beans, kabocha, okra, pumpkin, potato, sweet potato, lotus root, shiitake mushroom, shiso leaf and yam. Basically any vegetable that doesn’t have too much moisture. Combine three or four of these and you’ll have an amazing kakiage. 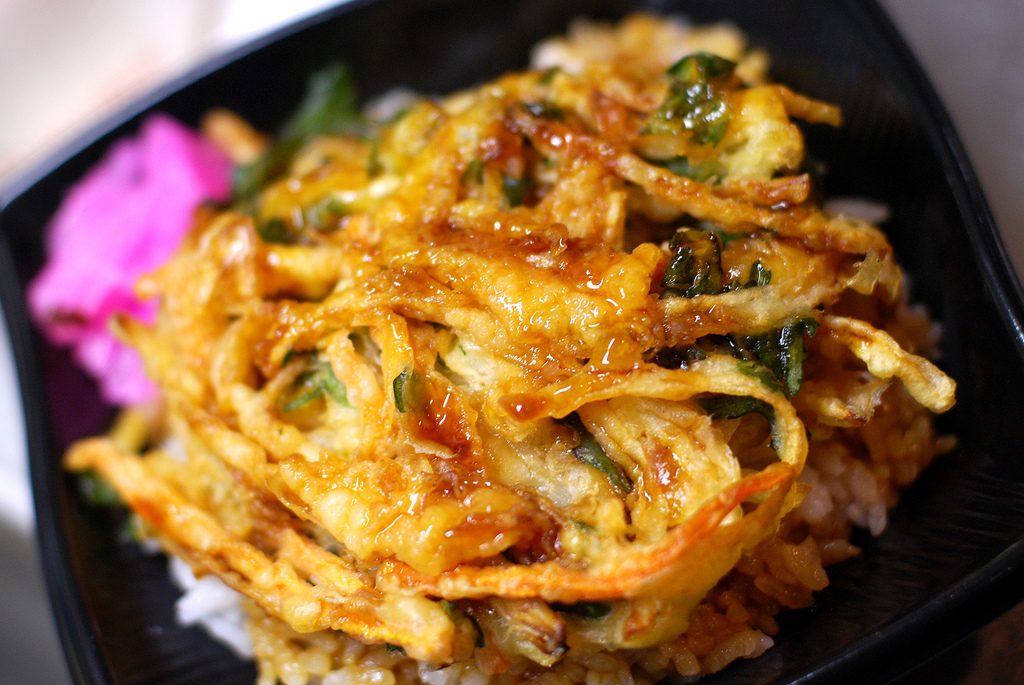 The vegetables and seafood used in the making of kakiage must be thinly cut or chopped to tiny pieces. Mix these up in batter and deep fry and you’ll have made yourself a crisp, crunchy tempura.

One of the things that make a great meal is the ingredients used. Sure, a chef’s culinary expertise is required, but with terrible ingredients, there’s not much a good chef can do to produce a good meal. With these kakiage udon ingredients, you can’t go wrong.

For the tempura batter: 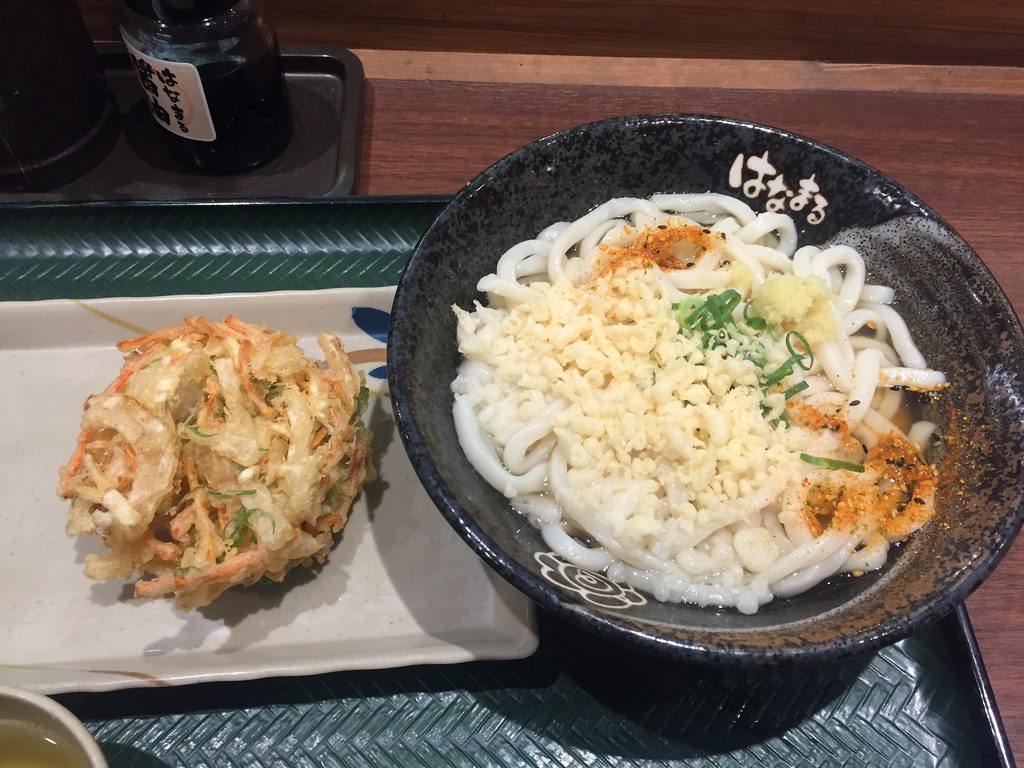 Apart from kakiage udon, kakiage tempura can be eaten as is with a dipping sauce of your choosing. Sometimes it is eaten salted without the sauce. There’s nothing like cold udon noodles with kakiage tempura for a hearty summer lunch.

Fascinating fact: did you know that the Japanese didn’t always deep fry their food with batter? True story. The idea of batter came toward the end of the 16th century when a fritter-cooking technique using flour and eggs as batter was gotten from Portuguese missionaries and traders.

The Portuguese initially used this flour and egg batter to carry out the fasting and abstinence rules for Catholics during the quarterly ember days (Quatuor Tempora). And this is where the word tempura came from. But the tempura in those days was deep-fried in lard with a batter made of flour, eggs, water and salt and was eaten without a dipping sauce. Interesting.

And… it’s a wrap! Do try and make this kakiage udon recipe sometime and enjoy the wonderful flavours from Japan. 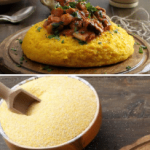 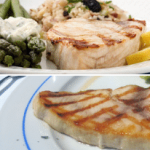