What lives in the ocean, has eight legs, a round head, and a knack for scaring the living daylight out of people? You’re right, it’s an octopus! This sea creature is truly a wonder. When it’s not entertaining you at an aquarium, it’s scaring you in a voyage-themed horror movie or perhaps, simmering softly on the stove and getting ready to be your dinner.

Can you eat Octopus Head?

You’ve probably heard of people who “eat” octopus—as in, put it in their mouths and chew it raw kind of “eat”—and in hearing this you’ve probably also wondered what parts of the octopus are actually edible and what parts aren’t. It turns out you can eat the head, tentacles, and other body parts with the exceptions of the intestines, ink, and beak. So that means, yes, you can eat the head of an octopus.

What does an octopus taste like? This is a question that gets tossed around a lot and for good reason. People often think that the octopus is slimy and tough. Well, that’s true for a raw octopus. But once cooked, the octopus head doesn’t taste slimy. If it were tough, that would mean it was undercooked.

An octopus is comparable to a crab in that it tastes more like chicken than seafood. Cooked octopus has a similar texture to lobster or large prawns. However, the taste of an octopus will ultimately be influenced by whatever seasoning you use on it and also the cooking methods you employ.

How to Prepare Octopus 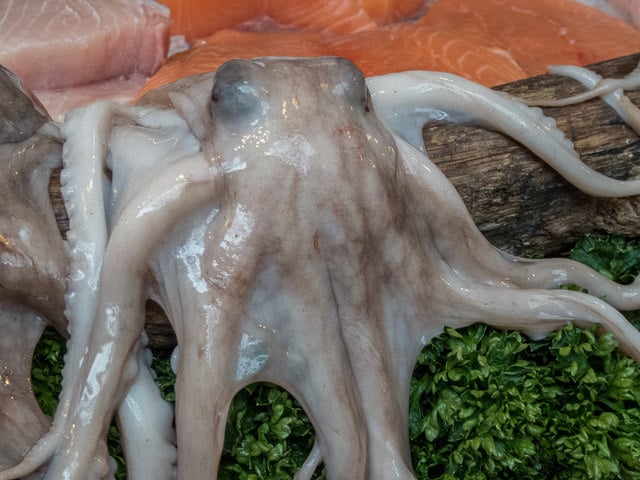 It’s not that complicated really, and this recipe is here to guide you and give you the octopus head meal you’ll never forget.

The first thing you should note about an octopus is that it’s protein, meaning it’s versatile. It can be cooked in a number of ways in various exotic dishes. It isn’t peculiar to any one culture, but it is universally delicious. It can be boiled, seared, grilled, stir-fried, fried, served with pasta or salad, made into stew or soup, or even barbecued. All you need is a basic knowledge of how to work an octopus and then you can let the chef in you go wild.

Another important point to note about the octopus is that contrary to popular opinion, it’s actually very easy to cook as opposed to chicken or pork and it often takes less time.

Different cultures around the globe have different ways of cooking their octopus. Some cultures actually eat octopus raw!

Just imagine a tentacle slapping its way down your throat as you note these basic steps all methods have in common:

Get the octopus. This is a simple but crucial step, as eating the wrong octopus can haunt you forever and affect your descendants. Lol, I’m just kidding. But seriously, octopuses aren’t all that hard to get. Just go to your local fish market and get one.

It can be frozen or fresh.

Here’s a fun fact: the octopus is one meal where buying the frozen version is actually better than buying it fresh. This is because the frozen type is already cleaned and you don’t have to go through all that slime-induced stress cleaning it up on your own. Unfortunately, the frozen type is more expensive and a bit harder to find (no pain, no gain huh?). If you’re only able to access the fresh version, no problem. It will work just as fabulously, the only downfall being that you’ll have to do the cleaning yourself (or pay a fishmonger to do it). 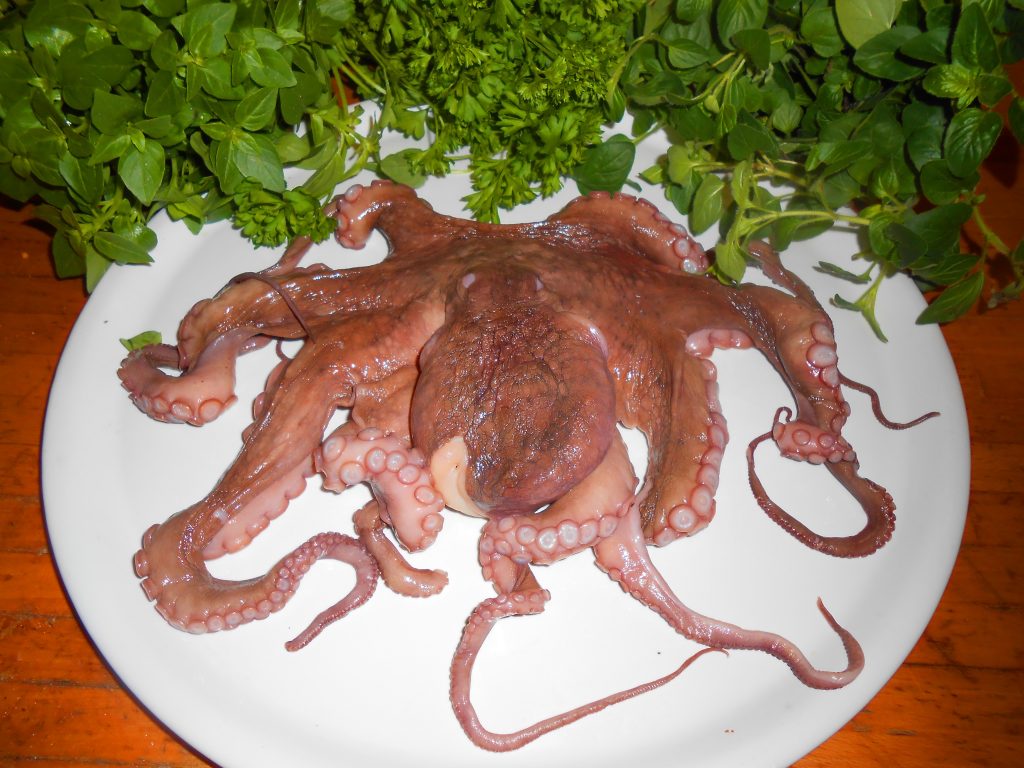 A quick tip: fresh not-frozen octopus is highly slippery and smells like the ocean. If the octopus you’re about to buy smells strongly of fish, then it has probably already gone bad. Now that we have our octopus, let’s move on to the next step.

Clean the octopus. Like I said above, if the octopus is coming straight out of the ocean, it’s going to need some major cleaning. This step can be skipped with frozen octopus as it already comes clean. To clean your fresh octopus, make sure your hands are clean and put the octopus in a clean bowl.

There are a number of recipes on the different ways you can cook your octopus head. However, boiling the octopus is a favorite way and your recipe for boiling an octopus is down below. The octopus has a natural dull-white color and a jelly-like feel to it. This is because the octopus does not have a skeletal framework to make it sturdy like humans or some fish do. The body of the octopus tends to just lay flat.

When the octopus is boiled, the heat congeals the body and makes it firm and less squiggly to eat. Some people grill or sear their octopus straight away after cleaning, but I like to boil first.

Quick tip: keep your octopus cold until you’re ready to use it. After cooking, its mass will be greatly reduced, so bear that in mind when you’re considering the size of octopus to buy.

Octopus Recipes From Around The World

So now that we have our cooked octopus, what next? Now the fun begins! You could do anything (and I mean anything!) with this octopus. The octopus is a staple meal in several cultures around the globe. Let’s look at a few of them and see what ideas they give us. 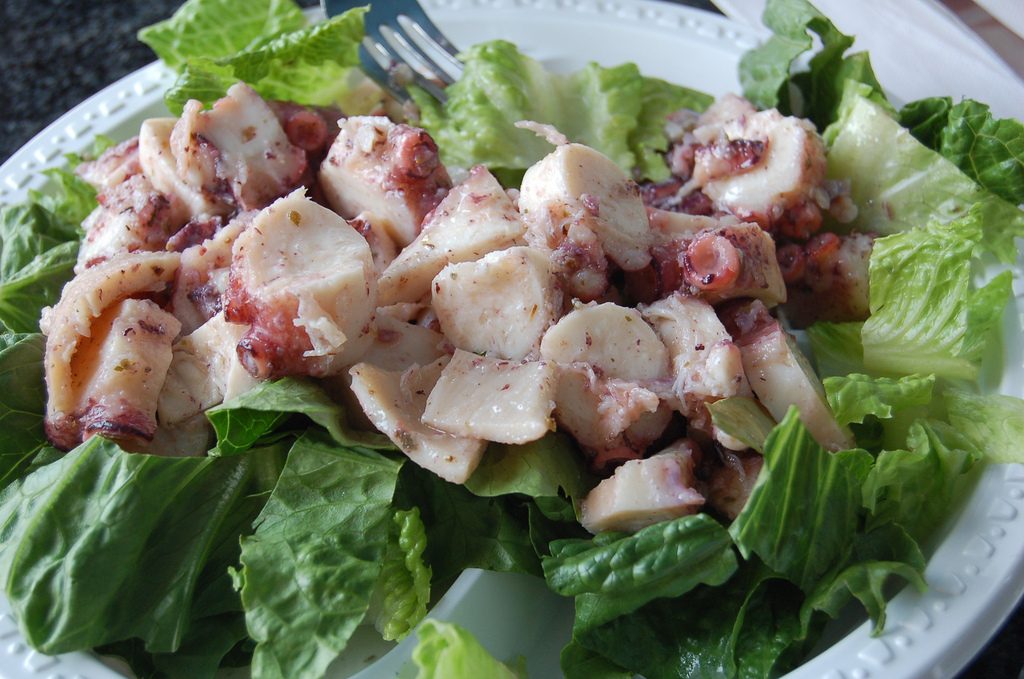 Japan: This is probably the home of raw octopus dishes. What does octopus taste like when you use it to make sushi or takoyaki? That’s a common dish in Japan so maybe when you visit Japan, you can try it out or make it yourself.

Korea: A delicious dish to try with your octopus from Korean cuisine is muneo-sukhoe or blanched octopus. After boiling the octopus as stated above, you simply slice it up, make a dipping sauce (for example, of sesame seeds) and enjoy the meaty goodness.

Portugal: In Portugal, the octopus is roasted with onions, potatoes, garlic, some herbs, and olive oil. It can be stewed with rice, and it’s called “Arroz de Polvo.”

Greece: The Greeks have a special way of preparing their octopus. The octopus is made tender by hitting it against a rock or hard surface. Then it will be grilled over an open flame. It’s served either hot a la carte or cold over salad. 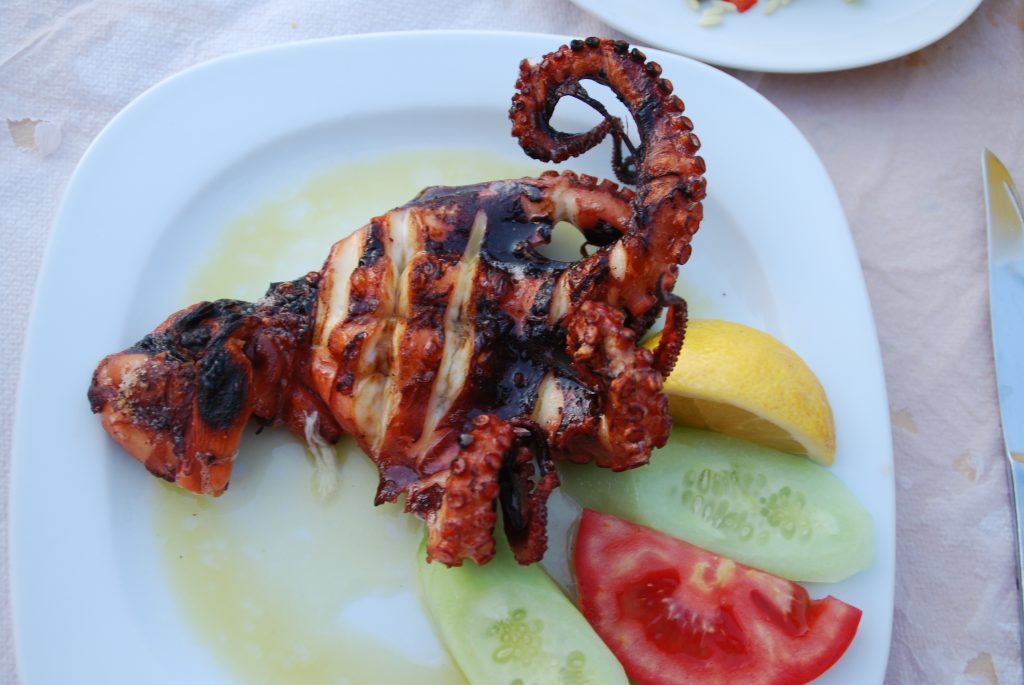 This is very important: it doesn’t make sense to stuff ourselves full of this incredible product of nature and then not live to tell the tale because of poor health choices, after all.

Exactly how healthy is it to eat an octopus?

According to the USDA Nutrient Database (2007), cooked octopus contains about 56 Calories for every 100 grams, and it’s a source of vitamin B3 , B12, potassium, phosphorus, iron and selenium.

Octopus is lean and has low calories (most seafood does). For instance, a 3-ounce serving of octopus has less than 150 calories and more than 25 grams of protein. To keep your octopus healthier, low-fat cooking options are ideal.

Make sure you have a wonderful experience cooking your next octopus head. Here’s a hint: if your family doesn’t like octopus, it might be a good idea not to tell them what they’re eating until they’re already enjoying it. Trust me, they won’t believe it…and it will be hilarious to see the looks on their faces. 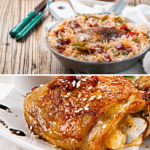 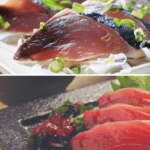