Italian plum tomatoes have a special place in cuisine, especially Italian. No sauce is complete without the proper use of tomatoes, and gravies don’t taste as good without some tomatoes or puree for the base. Tomatoes, whether freshly chopped or pureed, are an important part of many recipes no matter where you are in the world.

From soups to salads, stews, gravies, lentils, sandwiches, sides, and appetizers, there are several areas where tomatoes fit squarely into the frame. Owing to such a diverse use of tomatoes, they are grown everywhere in different varieties. You can confirm this with the wide variation of sizes, colors, and softness of the tomato. Plum tomatoes are one special kind of tomato which are grown on a wide scale for certain culinary uses. 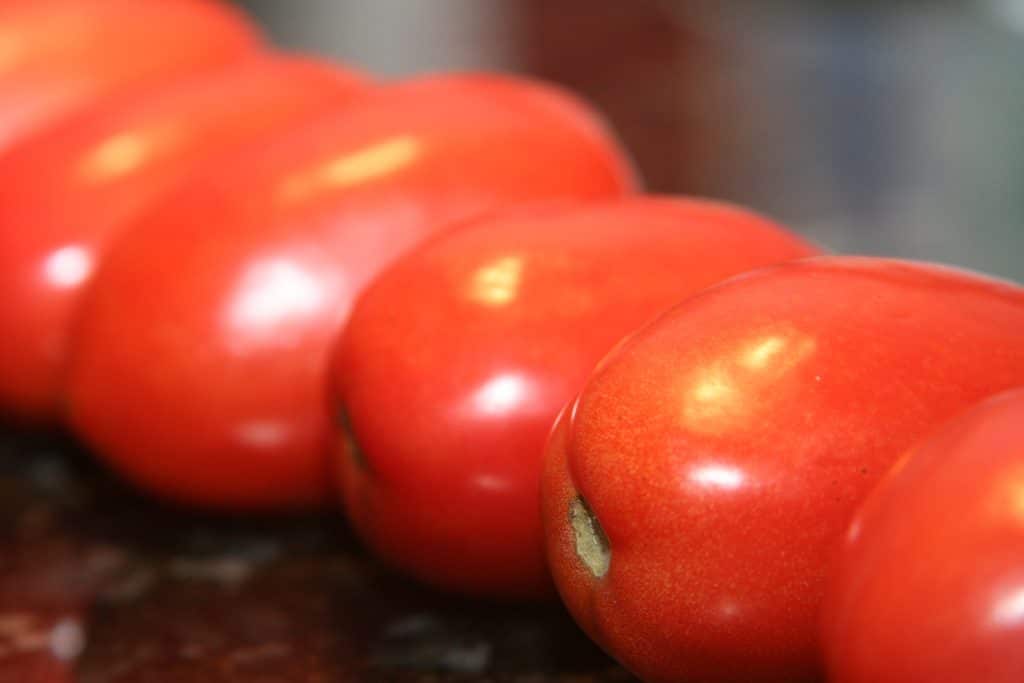 What is a Plum Tomato?

Each variety of tomato is grown for a suitable purpose. Plum tomatoes are the ‘sauce tomatoes’ meaning that they are specifically grown for making tomatoes sauces or tomato paste which can be used in recipes. You can identify a plum tomato from other tomatoes by its look, shape and internal anatomy.

From the outside, they are slightly cylindrical or oval in shape. On the inside they have fewer locules, the seed compartments of a tomato, with usually about 2 compartments. Their flesh to juice ratio is greater than an ordinary tomato, which means the solid part is more fully represented. That is why they are excellent for pastes. Moreover, these tomatoes are every chef’s darling vegetable, as they allow easier handling and prove to be life-savers during the tomato offseason.

Plum tomato is itself it’s own group which is further categorized into a number of subgroups. This categorization makes it easier for anyone to find and select the most suitable form of plum tomato without roaming from market to market.

These are the following known types of plum tomatoes: 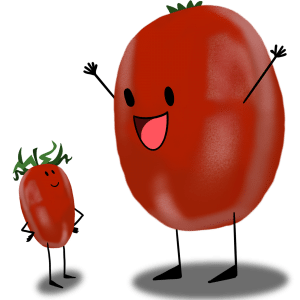 These tomatoes are also known as ‘grape’ tomatoes, because of their small size. They are not only smaller in size but also appear more oval than round in shape.

They have a South East Asian origin and grow in the climate of that region. They are bright red in color and slightly oval, which makes them distinct from cherry tomatoes. 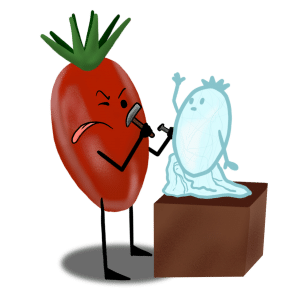 They are larger in size and appear bright red in color with firm structure. If you are cooking something meaty, Italian plum tomatoes are the one you should be opting for. 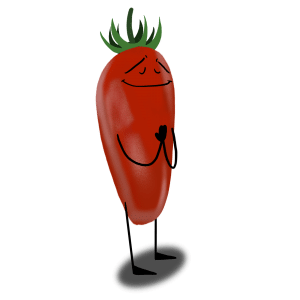 These tomatoes are somewhat more cylindrical in shape and have an extended tip.

Their name comes from the town of San Marzano, Italy, where they were first grown.  They require a warmer climate for better growth. 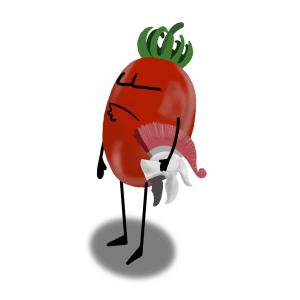 Roma VF is a special variety of plum tomato, which is grown through an openly pollinated variety of plants rather than a hybrid.

Most commercially produced and distributed plum tomatoes are Roma VF. They boil faster, and they are easily canned.

This vegetable (or fruit?) turns out ripe and pear-shaped. 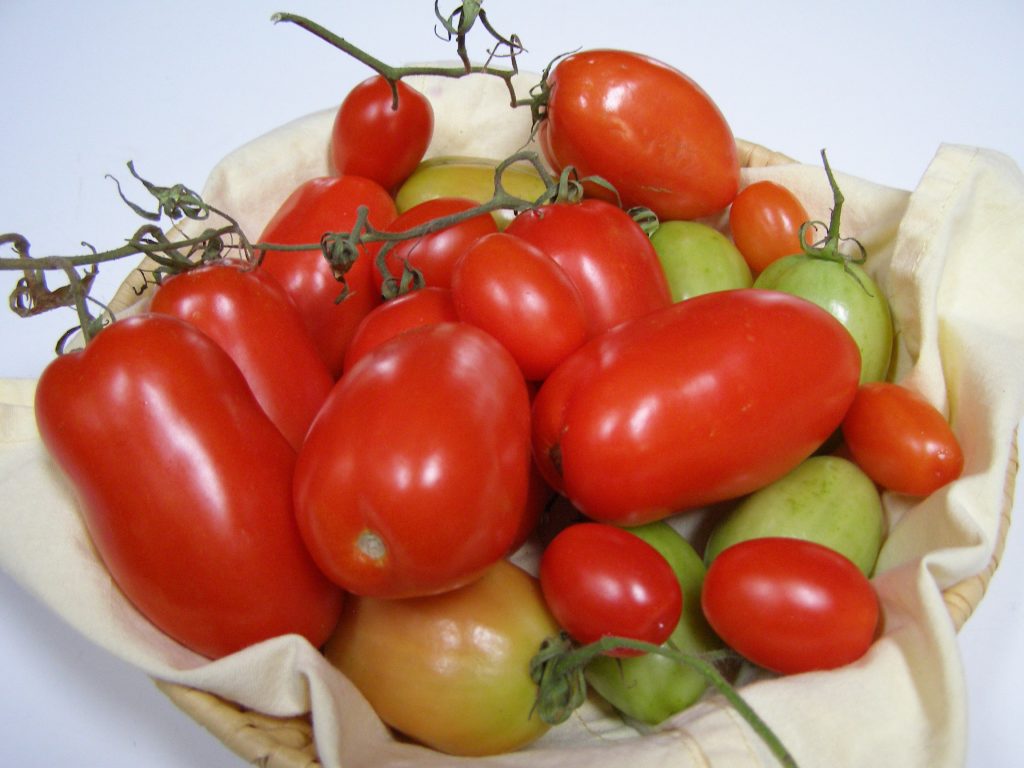 Plum tomatoes are not a type of vegetable that can only be found in fancy supermarkets. You can find it all its variety of subtypes at every grocery store.

Roma VF and Italian plum tomatoes are found in the nooks and crannies of every city, but for grape tomatoes or San Marzano, you would need to look in certain stores in your respective city. If you do not enjoy the taste of commercially grown tomatoes, you can always grow these at home, in your front yard or the kitchen garden.

Trust me! Homegrown vegetables indeed have no parallel in flavor.

How hard can growing a plant in your home be?

Just sow the seed, water it and wait! Right?

No, actually. While growing a plant does sound easy, it gets difficult when if you are not familiar with the basic technique. Each variety of tomato demands a certain kind of attention and special tips to keep growth up to the mark. The following steps are necessary to follow while growing a plum tomato plant at home:

You would be amazed to learn about the incredibly large tomatoes variety that exists today. There are hundreds. Only some are edible, and some are commercially produced and used on a large scale. Plum tomatoes have easier accessibility, but if you can’t find them anywhere for one reason or another then there are some substitutes you can look for. These tomatoes closely resemble plum tomatoes and may give the same results during cooking. 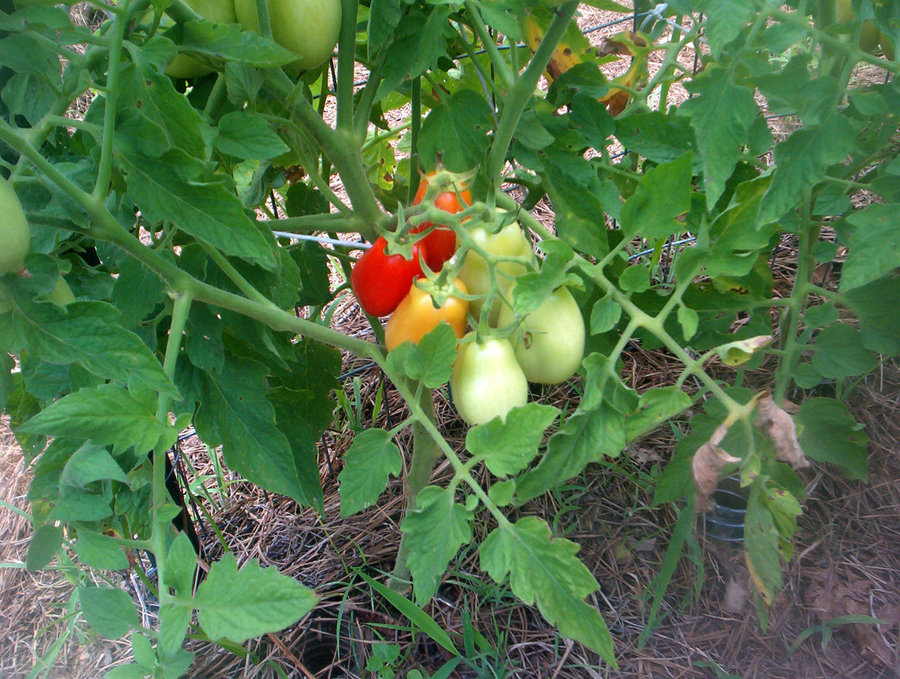 The Amish Paste tomato has its origin in Pennsylvania, the center of the Amish state, hence the name Amish Paste. The second part of their name suggests that they are great for making pastes or purees just as are red plum tomatoes. They are heart-shaped appearance and have a bright orange-red color. They also have more solid content than juice.

This is a hybrid variety of tomato which is available in a classic red color in a smooth round form. They contain a lower amount of acids and carry a mild taste. When sliced they can be used in sandwiches, burgers or salads.

This one is a Bulgarian variety of tomato which was brought to the US in 1995. These are deep red and round in shape tomatoes. They are sweet and juicy in flavor. Their sweetness brings them closer to the taste of plum tomatoes.

This variety of tomato is from Czechia and Slovakia and has rich red flesh and beefsteak shaped fruit. It is rich in flavor and contains a blend of sweet and acidic flavor. It is great for making bright red sauces. 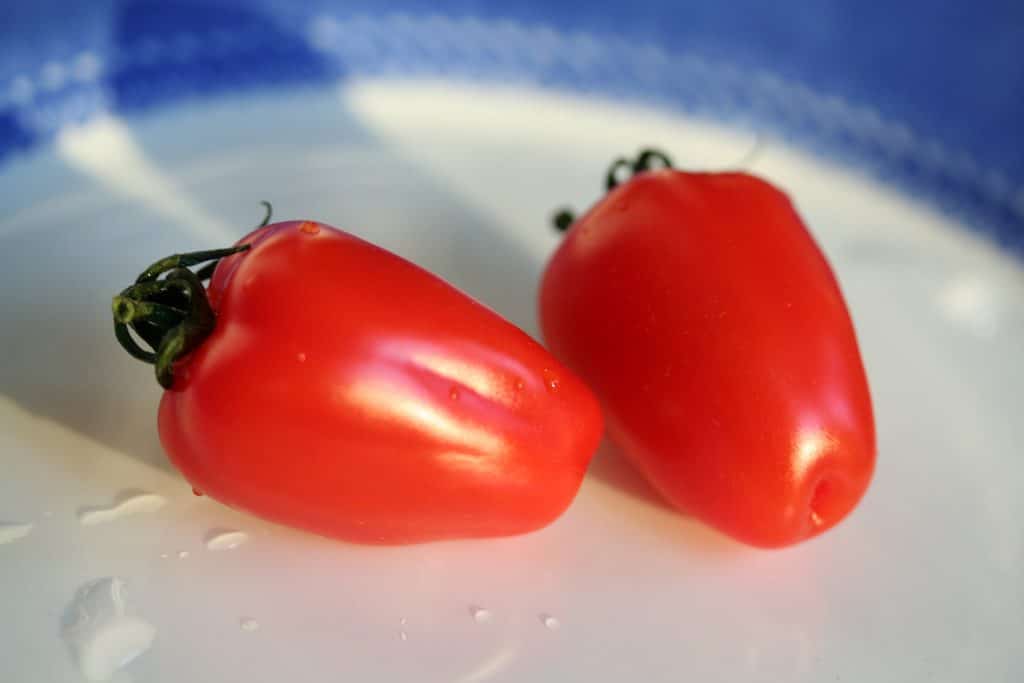 Preserving vegetables is important, especially for the offseason. Tomatoes, when kept at room temperature, are susceptible to rot. Hence they need to be preserved for longer durations. There are two methods to store plum tomatoes at home:

Freezing is comparatively a simpler technique which does not require long cooking time and saves a lot of precious time. There will be no peeling of the skin and or overnight cooling. 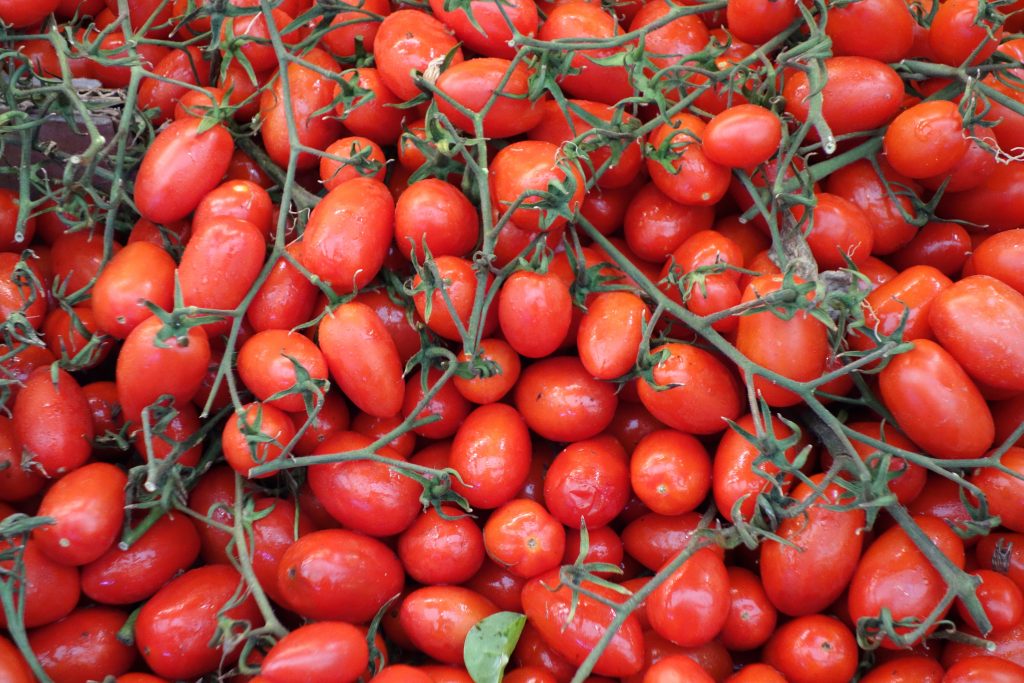 When it comes to tomatoes, there are many health benefits which are associated with them. Tomatoes are rich in nutrients and contain lots of essential vitamins.

According to the reports released by the USDA National Nutrient Database, tomatoes contain a good amount of vitamin K, vitamin A, and vitamin C along with thiamine, folate and vitamin B6.

A number of basic minerals are also present in tomatoes including copper, manganese, potassium, magnesium and phosphorous. The flesh and skin of tomatoes is a good source of fibers and protein.

Tomatoes are famous for their health benefits and have been in use for it since time immemorial. They have many properties which allow them to act against the threat of cancer and other harmful diseases:

Tomatoes contain a sufficient amount of lycopene in the flesh. Lycopene is an antioxidant which kills cancer-causing agents or other harmful radicals released in the body. Even when you cook or process the tomatoes, the amount of lycopene is retained and defends the body from cancer. Recent research by Harvard School of Public health students revealed that tomatoes are effective in fighting prostate, cervical, breast, esophageal and stomach cancer.

Protection of the Heart

Lycopene has another great quality. It stops lipid oxidation in the body which prevents the accumulation of fat in the vessels. This can save us from several cardiovascular diseases. According to the British Journal of Nutrition, a daily intake of tomatoes can reduce the amount of bad cholesterol in the blood.

Tomatoes contain a handsome amount of vitamin A. These vitamins are essential to maintaining the form and function of the retina in our eyes. Thus, tomatoes can improve our eyesight and prevent night blindness. Vitamin A is also an antioxidant that can detoxify the body from free radicals. 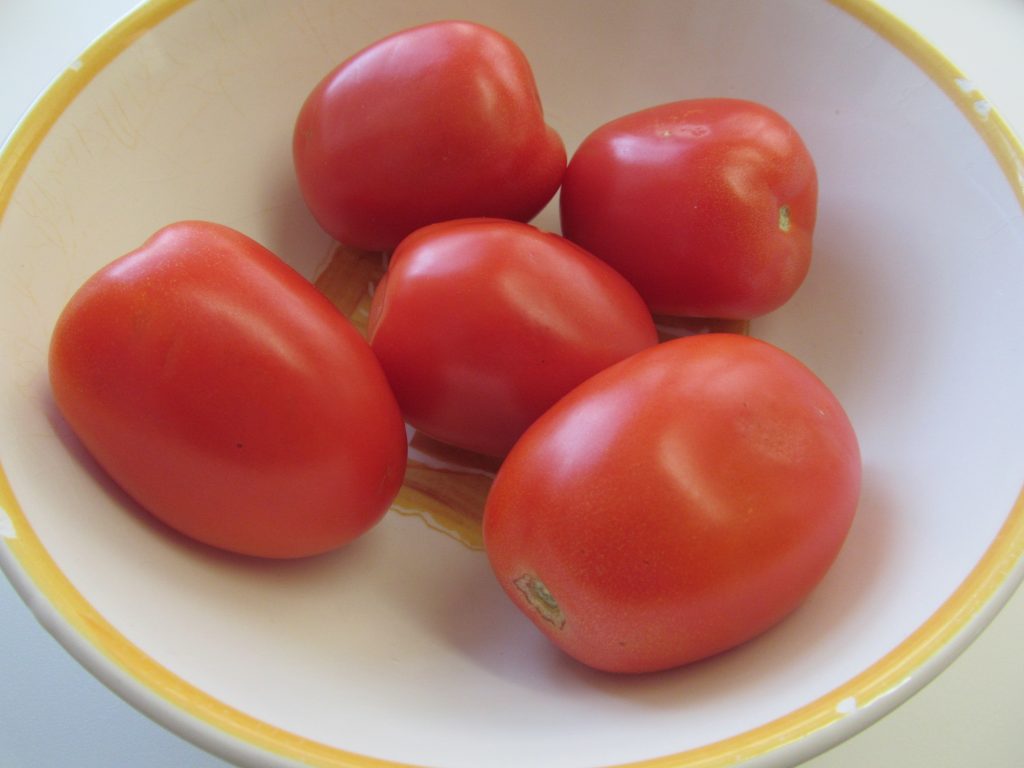 With its loads of fibers, juices, and minerals, tomatoes can also aid digestion and actively prevent diarrhea or constipation. It maintains the internal environment of the gut. Therefore, they are good for peristaltic motion and bowel movements.

We know that our kidneys work by a critical sodium and potassium balance maintained inside. People having hypertension have disturbed levels of potassium or sodium in the kidneys which mess with fluid retention in the body. Potassium is a known vasodilator, decreasing tension in the blood arteries and veins. Tomatoes contain a sufficient amount of potassium to make them effective in reducing hypertension.

Tomatoes contain protein, so they are great for skin and hair health. When tomato juice is applied on a sunburn, it can cure it. If consumed daily, tomatoes also protect our skin from UV light-induced erythema problems. They also have anti-aging properties.

And the list does not end here, tomatoes are also an antiperspirant, meaning that they treat excessive sweating! No sweat indeed! 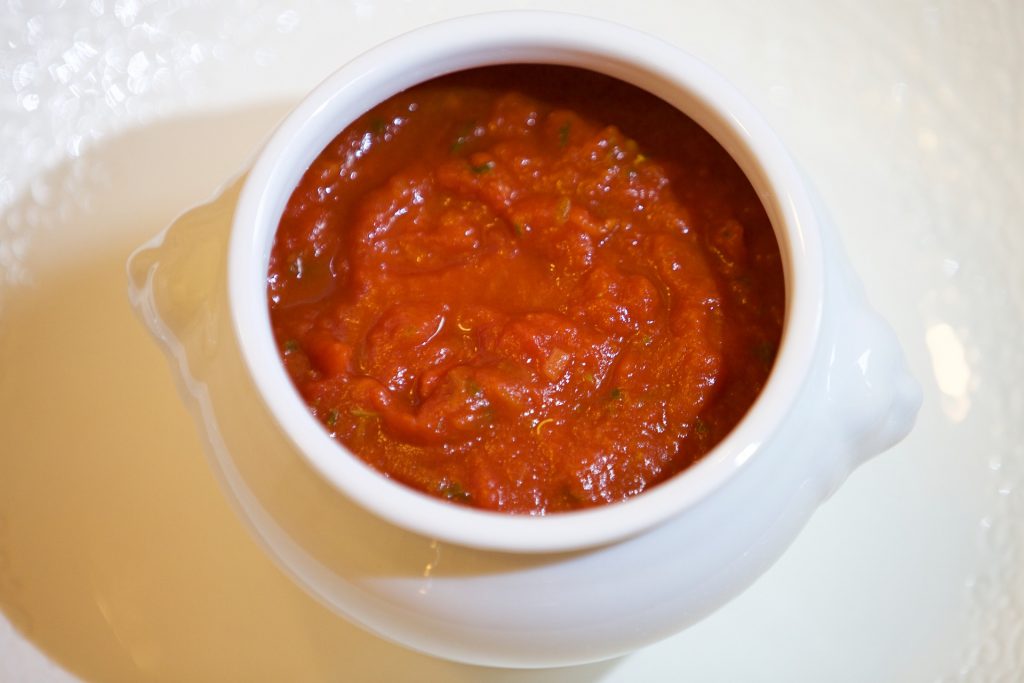 How to Make it:

Tomatoes are indeed a miracle fruit (or vegetable?) with so many varieties available filled with so many great benefits. Plum tomatoes are even more special as their solid content is far greater than any other type, with a lower proportion of seeds and juices. These tomatoes are best for all types of sauces, whether you are trying out some Italian cuisine or a French variety.

Read through the details of each variety of tomato before hitting the grocery store, as you may get confused between the simply good and the very best. Your selection should always depend on your particular use. Do not go for a raw, firm product to make sauces or purees as that will not result in the desired color or consistency. Stick to the basics, and you will do fine!