Warning: Use of undefined constant ‘do_shortcode’ - assumed '‘do_shortcode’' (this will throw an Error in a future version of PHP) in /home/customer/www/onthegas.org/public_html/wp-content/themes/yoo_bigeasy_wp/functions.php on line 32
 ᐅ QUAIL EGG SUSHI • Sushi on whole different level

If you are a big fan of sushi, then tobiko with quail egg, also known as quail egg sushi, is something you have to try. It is sushi on an entirely new level. A quail egg yolk nestled atop tobiko is a remarkable sight, truly like nothing you’ve ever had before.

Quail egg sushi is definitely one of my favorite types of sushi. Once while working in Japan, I went into this sushi eat-out which was barely a hole in the wall and ordered inari sushi. The chef suggested, then insisted, I try out the quail egg sushi. Initially I was a bit skeptical about the idea because I felt she was just trying to promote it.

I tried it anyway, and it was quite the experience. The feeling of the raw egg yolk popping open, along with the slight crunch of all the flying fish roe — it all created possibly the most unique food experience I’d ever had.

What is quail egg sushi? 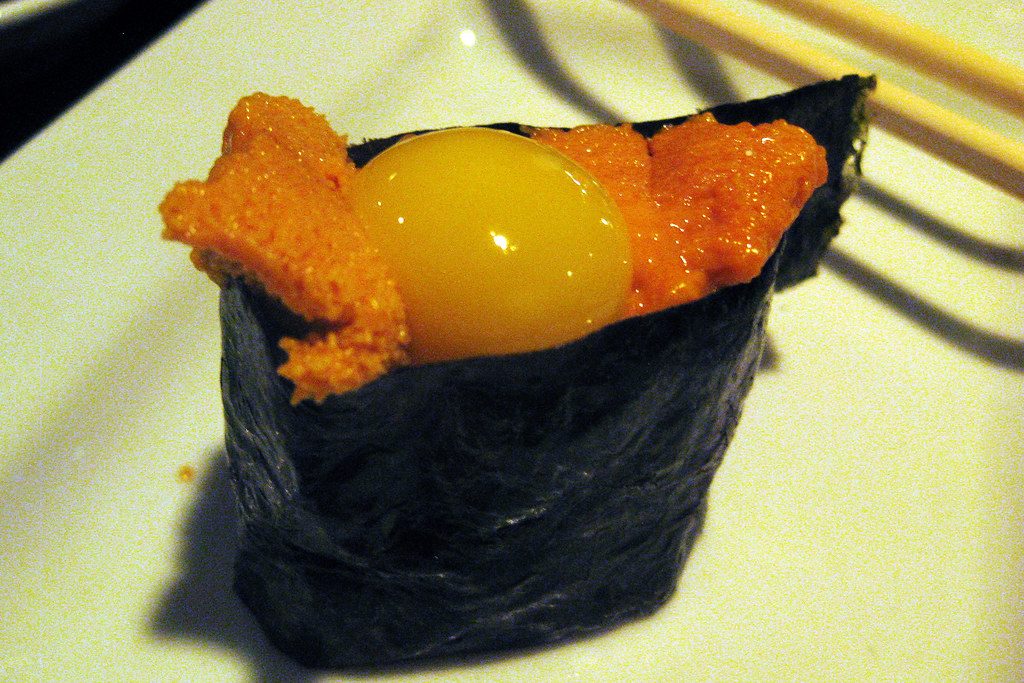 Quail egg sushi otherwise known as tobiko with a quail egg is a type of Japanese sushi that consists of quail egg yolk in combination with tobiko (flying fish roe) and other ingredients.

This sushi consists of rice wrapped all around by carefully cut out thin strips of nori. This is done in such a way that a hole tends to be in the middle like a cup. The hole in the middle is usually filled with tobiko after which the quail egg yolk is then placed on top of the tobiko.

Note that the yolk is usually very slippery, so one must ensure that the rice and nori combination should be constructed carefully so that the height of the nori is slightly above that of the sushi rice so it can support both the tobiko and quail egg yolk.

It may interest you to know that this sushi is also very nutritious.

Sushi isn’t a fattening food and it’s quite low in calories, with the rice bringing in some carbohydrates. It’s also quite rich in fiber due to the seaweed. The quail egg is rich in proteins and vitamins which are, of course, very good for the body. The yolk has a high level of cholesterol and saturated fats, so you might want to be careful of that.

As for the origin of this sushi, there isn’t much to say about it aside from the fact that it originated in the 1820s to 1830s or around the same time the nigiri style of sushi became popular in Tokyo. I’m not sure who discovered the genius idea of adding quail egg to sushi or the restaurant where it was first tried out, but there have been statements made by some individuals claiming that they discovered this sushi. 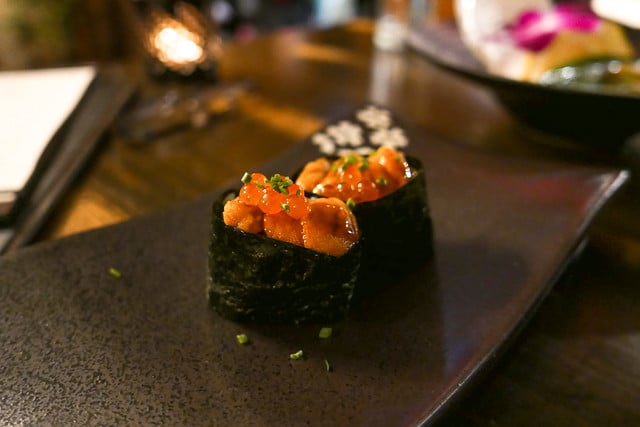 Quail egg nigiri or nigirizushi, otherwise known as hand-pressed sushi, is an oblong mound sushi made by compressing the sushi rice in between the palms to form a sort of oval-shaped ball. On most occasions, it can be served with a small amount of wasabi. The sushi rice is bounded with strips of nori and topped with the yolk of the quail egg.

The quail egg gunkanmaki, otherwise known as warship roll sushi, is also oval-shaped, made by a hand-formed mold of sushi rice that has a segment of nori folded over its edge to form a hole loaded with delicate, slippery ingredients that require the support of the nori. It is then topped with the quail egg yolk.

It is said that Gunkanmaki was concocted at the Ginza Kyubey eatery in 1941. Its creation did nothing less than increase the list of possible delicate toppings utilized in sushi by one. The gunkanmaki also happens to be a very popular quail egg sushi compared to the others. The quail egg temarizushi, commonly known as ball sushi, is made by squeezing rice and fish into a ball-molded structure by hand, utilizing a cling wrap.

Note: For those that don’t know what tobiko is, it is flying fish roe (small fish eggs) found in many types of sushi. They are usually very small in size, ranging from red to orange, bearing a mild smoky and salty taste and a very crunchy texture. 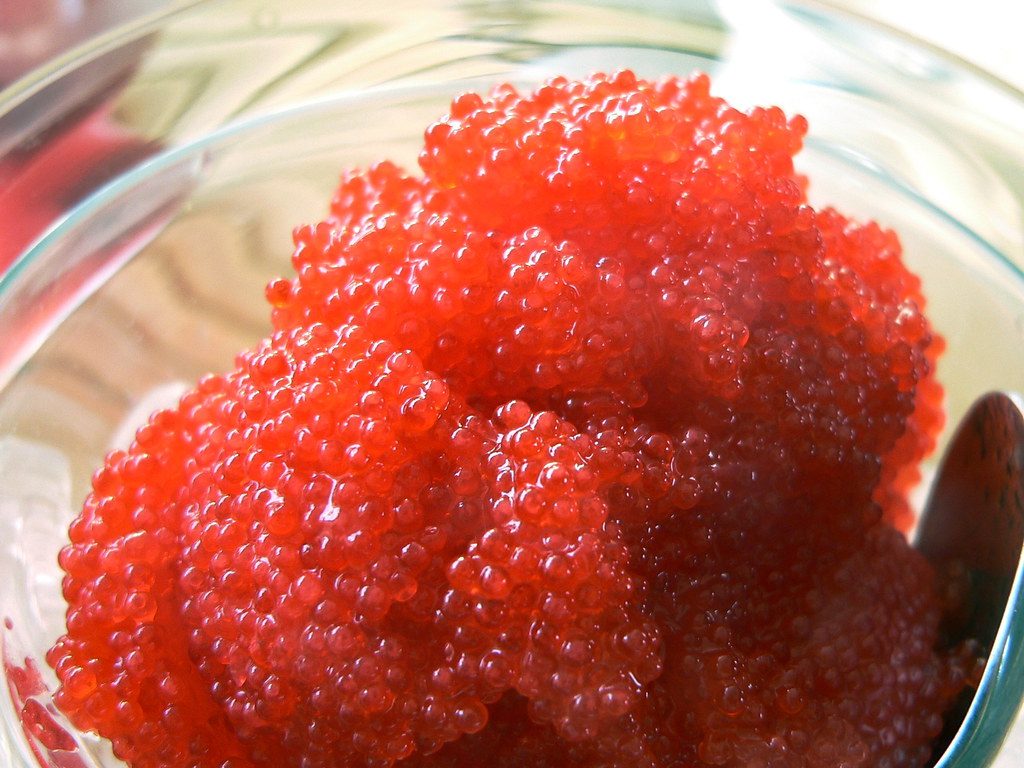 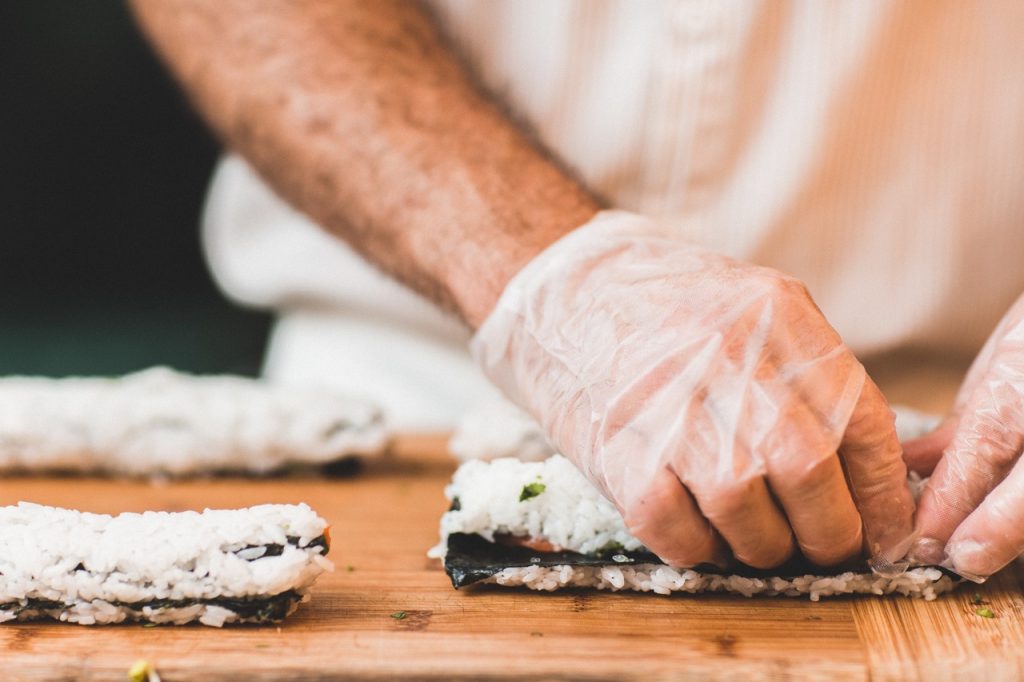 For the sushi rice, you will need the following ingredients: 5 cups of short-grain sushi rice, 4 cups of water or more, ½ cup of rice vinegar, 2 tbs of sugar and 1 tsp of salt. To prepare, wash the rice with clean water. Over medium heat, place a pot with some quantity of water in it and bring to a boil before pouring in your washed rice.

While the cooking is going on, pour the rice vinegar in a bowl, add the sugar and salt then mix thoroughly. Pour the mixture into the boiling rice and allow to cook for 20-25 minutes. Turn off the heat when all form of water has dried up in the rice.

Note: most people usually just take the egg yolk and place it on top of the tobiko, maybe to avoid the slippery texture of the egg white. Some others like myself will just use the whole egg. Either way, the taste, and texture remain the same because once the egg is broken you won’t even notice the egg white.

So, if you are one of those that prefer only the yolk of the egg, simply use your hand or a spoon to remove the egg yolk from the white and carefully place on top of the tobiko.

If you’re a fan of sushi, the quail egg sushi is a type you should definitely try out. The above is more than enough information to bring you closer to this strange little oddity in Japanese cuisine. Give quail egg sushi a try and let me know what you think!