Have you ever had rabbit? It may sound unenticing until you’ve had a rosemary rabbit recipe. This is the type of meal that my grandmother used to make and I’d always turn my nose up and hate the idea of eating it until I actually ate it. My recipe has perfected the different flavors of rosemary rabbit by braining rabbit in a rosemary, tomato, and white wine sauce.

If you’ve never had rabbit meat, you should know that while it does have its own taste, it has a similar texture and flavoring to chicken. You can cook it in many of the same ways. Nowadays, you can actually get it at many supermarkets and from butchers. You can also catch rabbit.

People have been working it into their diets more and more because it has some great nutritional qualities and it makes for a new kind of meat to work with because it is easy to digest. Many people, including bodybuilders, will use it as an alternative to red meat.

If you want a new form of protein or you are looking for a meat that is low in fat but high in vitamins and minerals, give this rabbit recipe a try! 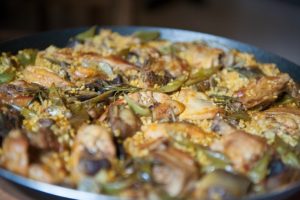 If you are looking to make rabbit and want to start with an easy recipe, this is a good one. Don’t let the longer ingredients list fool you. You can absolutely make this in about 30-45 minutes for about 6 people (even though it is so good that you might not get as many).

Each serving will have about 330 calories, so it is a great meal to pair some starchy sides with for calories.

When you go to pick up your rabbit at the butcher, ask for it to be cut into pieces or cut the rabbit yourself. Be sure to use a very sharp knife and take your time. You should also warm your serving plates so that the meal stays warmer longer, as rabbit tends to cool quickly.

You can use the sauce to top off the rabbit dish or you can use it on top of the side dishes to really bring the entire meal together. 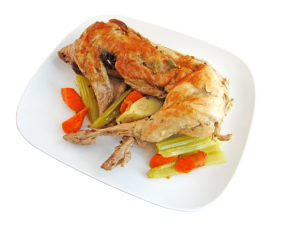 Since rabbit is such a strong dish by itself, you will need to add some starchy sides. I like to pair my rosemary rabbit with noodles, rice, potatoes, and a side of roasted vegetables.

I’ll start my meal with a salad and then end with a good dessert. Since rabbit tends to be lower in calories, you can splurge a little bit with an extra piece of cake.

Why Should You Eat Rabbit?

In certain areas of the world, rabbit meat is as common as other meats. It has never really become a meat staple in the United States, however.

This could be because we often have them as pets or because of the Easter Bunny. Some grocery stores will carry rabbit and many local butchers and meat markets can get them. Even so, many people do believe that we should eat more rabbit meat to help with health.

Rabbit is one of the leanest, healthiest, and tastiest meats that you can eat. When you compare it to almost every other major meat (beef, pork, lamb, turkey, veal, and chicken), it has fewer calories per pound and more nutrients. Rabbits tend to eat greens and health foods, and they cannot rely on corn or soy, so they are some of the healthiest animals. Even better, rabbit meat is one of the most environmentally friendly meats to harvest.

How Else Can I Prepare Chicken?

The meat itself is like a chicken with a stronger taste. You can prepare it in so many different ways, and you can almost always substitute it for chicken. You can saute it with oil or butter, or put into a sauce. I’ve had it with noodles, in soups, and even in sandwiches.

The fat that does burn off of it does make it easier to cook than most other meats, especially if you don’t have the best cookware. You can also roast a rabbit like you would a chicken.

Where Can I Buy Rabbit Meat?

Where can you actually get rabbit meat if you do not have a good relationship with a butcher or you aren’t really a fan of catching your own rabbit? It isn’t even legal to catch or kill rabbits in all parts of the country.

Rabbit is really difficult to source and find for most people. You can sometimes get it at more international markets, but you sometimes have to ask for it specially as they don’t have it on display. 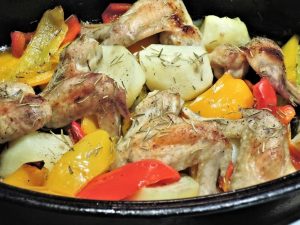 Often, you will have to drive pretty far to find rabbit meat. You can start your search by talking to your local butcher and move on from there. If you live near an area where there is a farmer’s market, you can ask around there as well.

You should know that rabbit is often sold whole, but you can ask your butcher to cut it apart for you. I learned how to cut up my own rabbit by watching a YouTube video. It is very similar to breaking down your own rabbit. You need to find specific joints and remove certain parts.

There are a few tricky areas, so make sure that you have a very sharp knife and enough space to break it down. The ribcage is pretty difficult, but once you’ve done it a few times, you will be okay.

Your first few attempts at rabbit aren’t going to be great, but if you follow this recipe, it will be quite good. You will get better and better at making it as you go. Try starting with smaller pieces of rabbit so that you can ensure that it is cooked through, which is the hardest part. 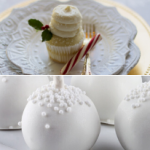 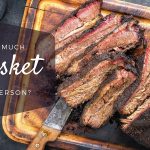 How Much Brisket Per Person?