While most people wouldn’t think to use a substitute for shortening (well, because shortening is awesome), what happens when you run out of this awesome fat? You don’t need to stop cooking—you can use a shortening substitute!

There are shortening substitutes all around you in your kitchen. There’s no way you wouldn’t have at least two of these substitutes available… Um, unless you don’t have a kitchen at all.

Just as you can use your shortening for baking pastries, cookies, cakes, and desserts—even for greasing pans—there are substitutes available that can replace all these same functions. But note, just one substitute can’t do all the tricks.

That’s why you have to know the right substitute to use. A substitute that works great for baked goods won’t necessarily work well for frying. Before we learn our substitutes, let’s make sure we know our shortening well enough, to begin with.

Does the “Shortening” Only Refer to Crisco?

For starters, Crisco is just a brand of shortening—the most popular and the very first. The term shortening often brings confusion when it is used. Some people understand shortening to mean any fat that’s solid at room temperature, which would include butter, lard, margarine, and of course, hydrogenated vegetable oil ( also known as vegetable shortening). 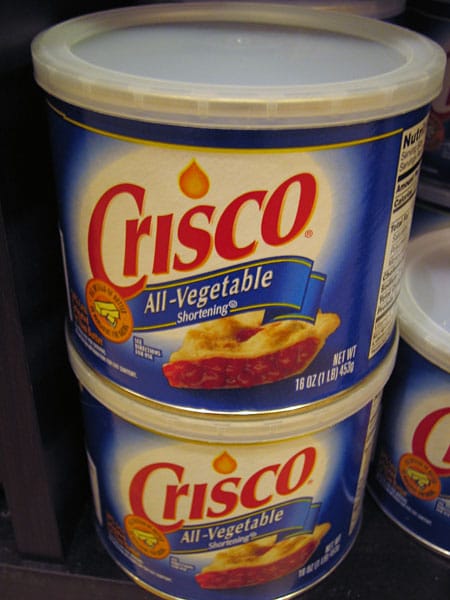 Vegetable shortening is actually different from lard, butter, or margarine, even though they’re all closely related. At room temperature, it is a fat that’s used mainly in baking, for example when it is used to make crumbly or mealy pastries. In cooking, it’s used especially during frying. Some recipes call for it only because they need it to act as grease for pans, which it does quite well.

Note: Shortening from here on out means vegetable shortening, so let’s not get it mixed up.

There are quite a number of options available and you don’t have to travel too far for any—they’re already in your kitchen.

Butter or margarine: Both fats share very similar characteristics, and everything written above for butter works just fine for margarine as well. Like butter, it is an ideal substitute for shortening in cake, cookies, bread, and other pastries, but not suitable for deep frying and pie crusts. 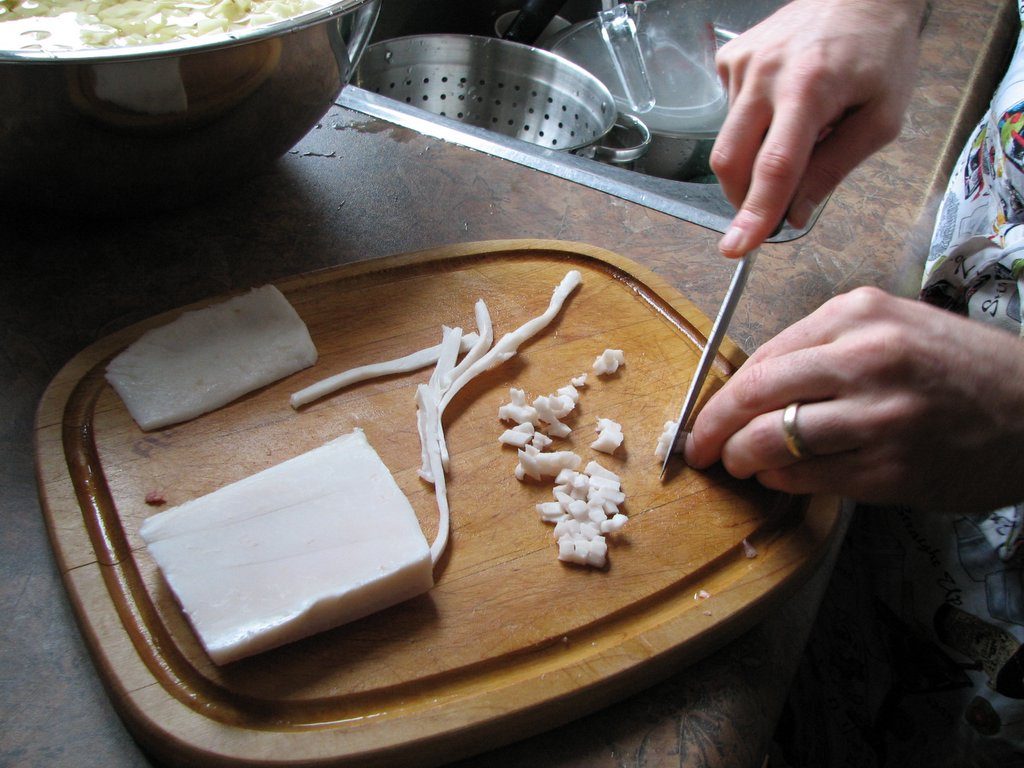 The rule for swapping in margarine is the same for butter: for 1 cup of shortening, use 1 cup plus 2 tablespoons of margarine. Or, you could do a combination with one part margarine and one part shortening. It’s also better you start using both when they’re cold, as that will slow down the melting time.

Lard: The best thing about using shortening for baking is that it inhibits the formation of gluten because it has no water. Lard is just like that too—it is 100 percent animal fat, and as such, it is perfect for making flaky pie crusts and light, tender baked goods where the fat and dry ingredients won’t completely mix.

Lard can also be used for frying once it has been melted (it shares the same qualities as shortening). For recipes that call for short or stretchy dough, lard is your go-to substitute. Plus, it’s gluten-free.

Unlike shortening, lard is a tasty non-hydrogenated fat which contains no artificial additives. It’s rich in saturated fats, meaning it is not considered a healthy option. Other than that, lard is the closest substitute available. To substitute 1 cup of shortening, use 1 cup of lard but subtract 2 tablespoons from it. Another good animal fat to consider as a substitute is suet.

Oil: This class of substitute is best suited to swap into your recipe when you’re frying something. You can use these in baking, however, they just won’t feel right. Olive oil, coconut oil, vegetable oil, and peanut oil are all very good oil options.

Coconut oil is solid at room temperature, so you can use it for creaming and as a spread too. It is a healthier alternative, though it has more fat. Olive oil is another super heart-healthy oil that’s just perfect for you. It can be a replacement in grilled sandwiches, though it is not ideal for sweet baking-products. For deep-fried recipes, peanut oil is your go-to oil.

Vegetable oil is also good for frying and can be used in baking by substituting four parts shortening with 3 parts vegetable oil, while also increasing the number of eggs and quantity of sugar in your recipe. To substitute any of these oils for frying, use the same quantity as shortening required.

Note: Cakes made with oil have a very different texture, but that shouldn’t come as a surprise. 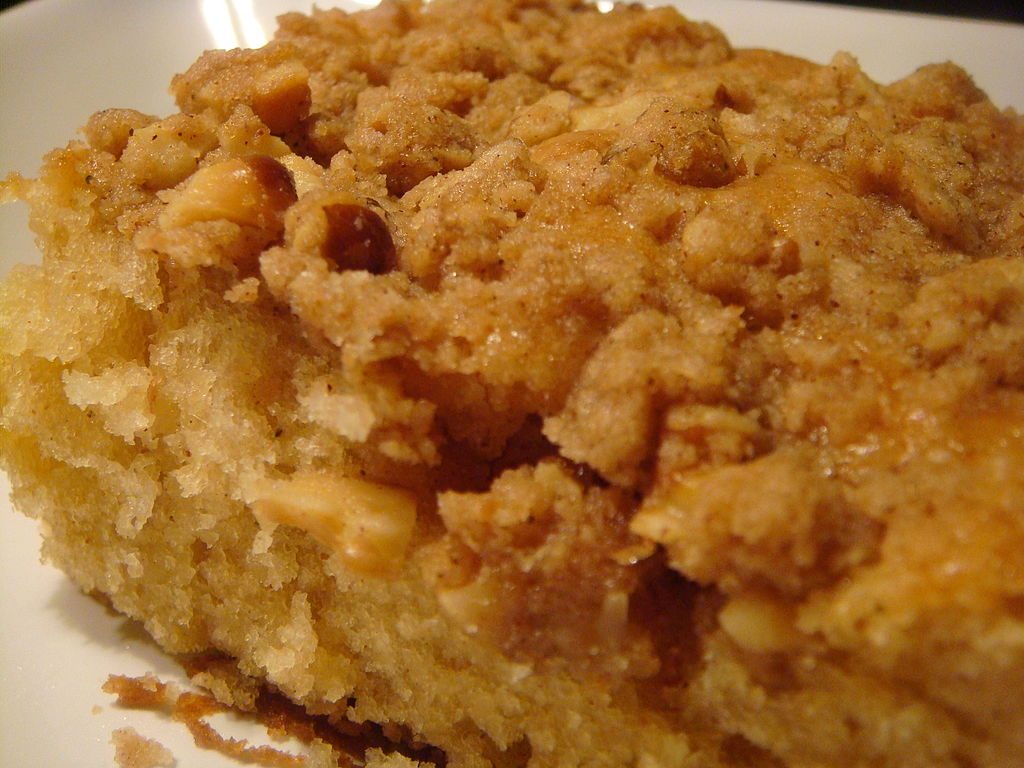 Applesauce: Equally good as a substitute for baking cookies, cakes, and batters. Use just half a cup of applesauce to replace one cup of shortening. It yields nutritious, moist, light, yet dense baking-products. If you’re using sweetened applesauce, reduce the quantity of sugar in your recipe.

Fresh cream: This works only as an alternative when making milky-flavored baked goods like milk cookies. If the recipe calls for 1 cup of shortening, use 1 cup of cream. For chocolate-flavored baking goods, pureed prunes work fine and ½ cup is enough to replace 1 cup.

Mashed banana: Simple to work with and all that’s required is a 1:1 substitution.

Smart Balance and any other vegan alternative that’s available. Your Smart Balance is also useful when it comes to greasing pans.

When it comes to substituting, extra care has to be taken to ensure that you don’t mess things up, especially if it’s your first time experimenting with the substitute. The 7 options above are superb and work well in recipes where shortening is used as a fixative, as a moistening agent to hold batter together, or as a greasing agent to prevent sticking. If you simply don’t like the shortening, organic and hi-ratio shortening are good options to explore too.

What Purpose does Shortening Serve in Our Recipes? 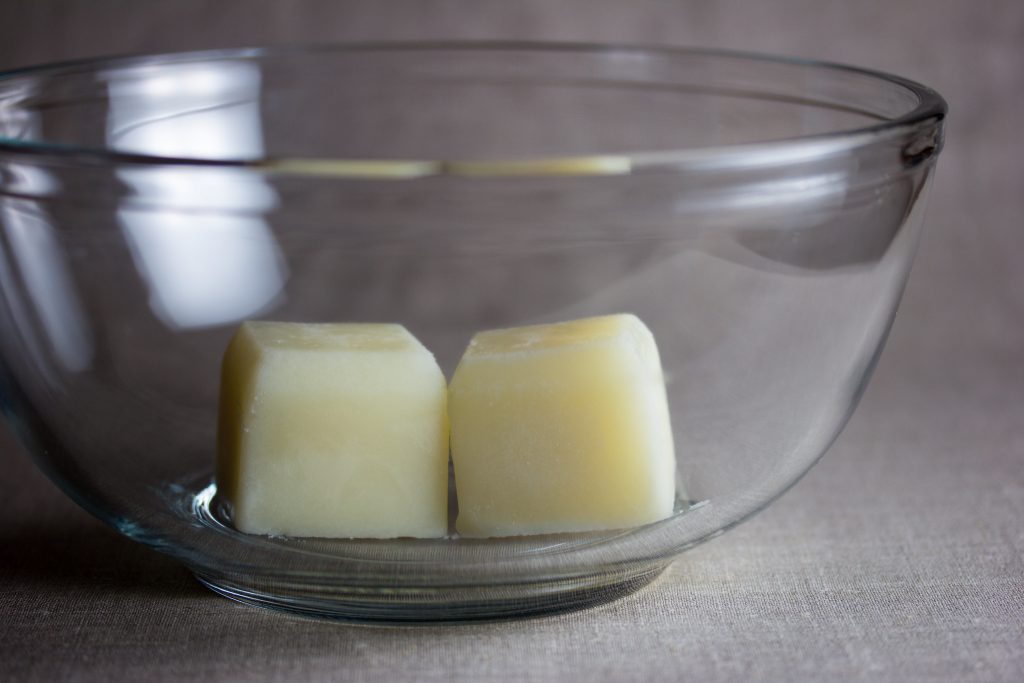 If you intend to substitute a product the right way, the first step is to know what purpose it serves in the recipe. If you’re substituting out an ingredient in a recipe that serves as a leavening agent with one that serves as a flavoring, then you’ve gotten it all wrong and your end product will definitely be a far cry from the standard.

We use vegetable shortening in frosting recipes, baking recipes (pastries, cakes, cookies), for frying, and as a greasing ingredient. It serves well for these purposes because:

The bad news is that sometimes, we do need that flavor. What if you want to make a really basic cookie that wouldn’t have much flavor on its own, and the recipe calls for shortening? Maybe you know quite well that with shortening, the cookie won’t satiate your sweet tooth. Use a shortening replacement.

Remember, these benefits are achieved better if you’re using a good shortening brand. Use brands such as Crisco or Cooken, which have been reformulated to get rid of trans fatty acids. If you’re not sure if your shortening contains trans fat, check the label—if it does contain trans fat, drop it and pick another brand.

Yes, You Can Substitute Shortening for Butter

Some can’t help but wonder if they can use butter instead of shortening. Maybe you actually meant to ask if you could substitute shortening for butter when you asked about shortening alternatives. And yes, you can. Butter is a good substitute, so in those recipes calling for shortening, you can easily swap it out with butter. 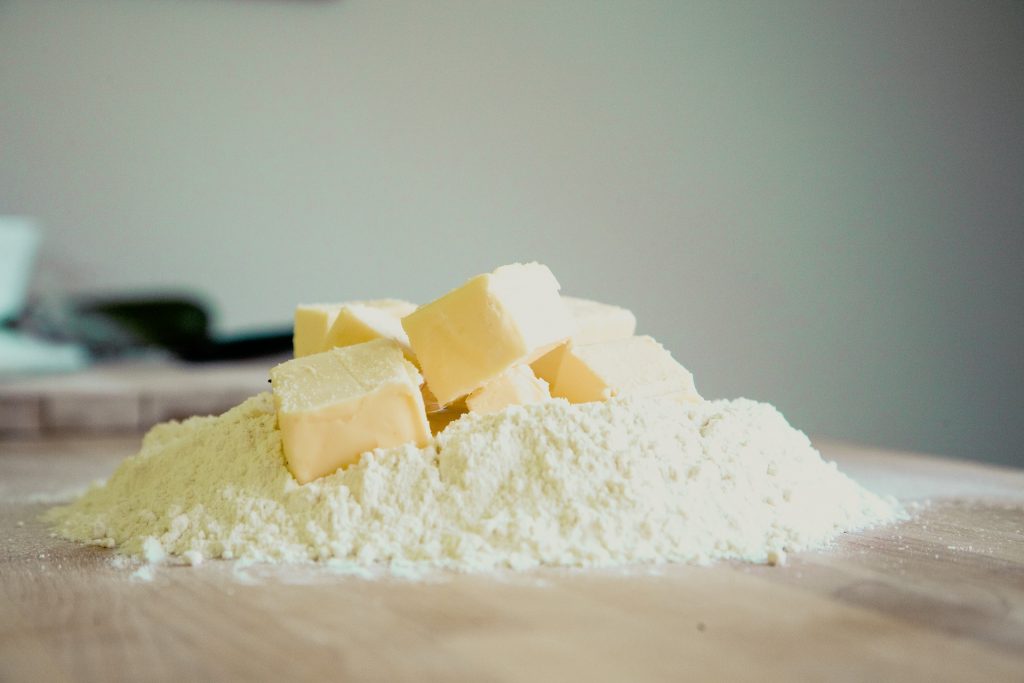 Butter, just like your hydrogenated vegetable oil, is a semisolid at room temperature. However, it is a much softer fat. It is about 80 to 85 percent fat and 15 to 20 percent water, though the exact amount varies from brand to brand. As a substitute for Crisco shortening, it doesn’t work well for all shortening functions.

Due to its relatively high water content, butter is not suitable for deep frying since there’ll be splattering, and moreover, it has a lower burning point and will to start to smoke up easily.

What about in frosting recipes?

A lot of us already use butter as our go-to frosting fat, and it works just fine for that, especially because of the flavor it adds. But the sad thing about using butter for frosting is that we’re almost always worrying about how long our frosting can hold its shape. We can try to ensure that the temperature is cool enough to prevent melting, but butter has a really low melting point.

It will easily go soft if the temperature is no longer cold. Even at room temperature, butter is already soft, so you definitely don’t want the temperature to go beyond that. Even if it tends to melt easily, let’s not forget the wonderful flavor it adds to our buttercream and all things frost. The bottom line is that if you’re using butter, keep your cake away from warm rooms so the shape doesn’t fall apart.

What about for baking?

Yes, it still is a good shortening substitute. The water content of butter comes in quite handy here as it alters the texture, consistency, and even the flavor of the baked goods. Its lower melting point also greatly influences the texture of your baked goods, making them less flaky, less fluffy, and less crisp. The cake will turn out as light and tender as one made with shortening if you cream the ingredients properly. The difference is hardly noticeable with cake and bread. 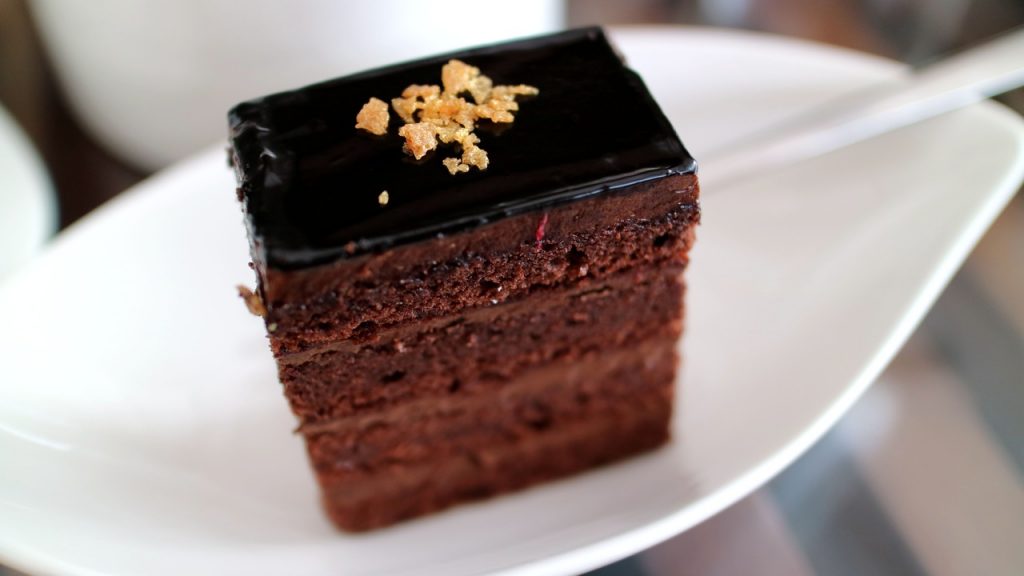 However, if you’re planning to make pie crust, which is supposed to be flaky, using butter might not be the best option, as the flakiness will be noticeably absent. For cookies, it works perfectly fine—it imparts flavor and makes them crispier, darker, softer and more spread-out.

If you’re worried about how healthy your butter is, opt for organic, brown, and low-fat butter as a healthy substitute for shortening. Also, do not use whipped butter or blends if you’re baking, as these won’t turn out well. You can of course also use butter as an alternative for greasing pans.

You can also add ¼  teaspoon of salt to have salted butter as a substitute. If you’re adding salt to a recipe that calls for it, reduce the quantity of salt originally called for. In weight measurement, 25% more butter will do the trick.

Tip: To get the perfect blend of flavor and texture, especially if you’re making cookies or frosting, substitute 1 cup of vegetable shortening with ½ cup of butter plus ½ cup of shortening. This will help the frosting or cookies keep their shape and still taste divine. I absolutely recommend this unless you have no shortening around.

You can also mix part flaxseed powder and part butter for use as a substitute.

Shortening substitutes are really worth giving a try, especially if you want a change from the regular use of shortening. Or, just because you were too lazy to get more after you ran out of shortening! 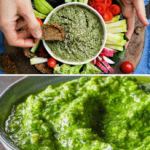 How to make Pesto 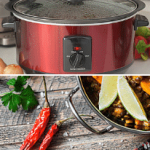 Using The Best Slow Cooker Made In USA