I’ll be honest, I didn’t always know the best sides for fish dinners, and as a result, I think that I may have made some poor choices in my pairings. Over the years, I’ve learned what flavors pair best to make great side dishes for fish, and I’ve even expanded my knowledge to the best veggies and salad dishes as well. In the next few sections of this article, I’m going to show you some of my favorite side dishes to accompany various seafood main courses, which include salmon, shrimp, tilapia, and lobster.

Now’s an excellent time to incorporates some seafood dishes into your diet because the later part of the year is typically better for seafood yields. In fact, as a kid, I was often told to only eat seafood in months with an “r,” which I later learned is due to red tides. In any situation, seafood is just more plentiful and cheap during the later part of the year, and you can make this plentiful bounty work for your dinners.

What to Serve with Fish 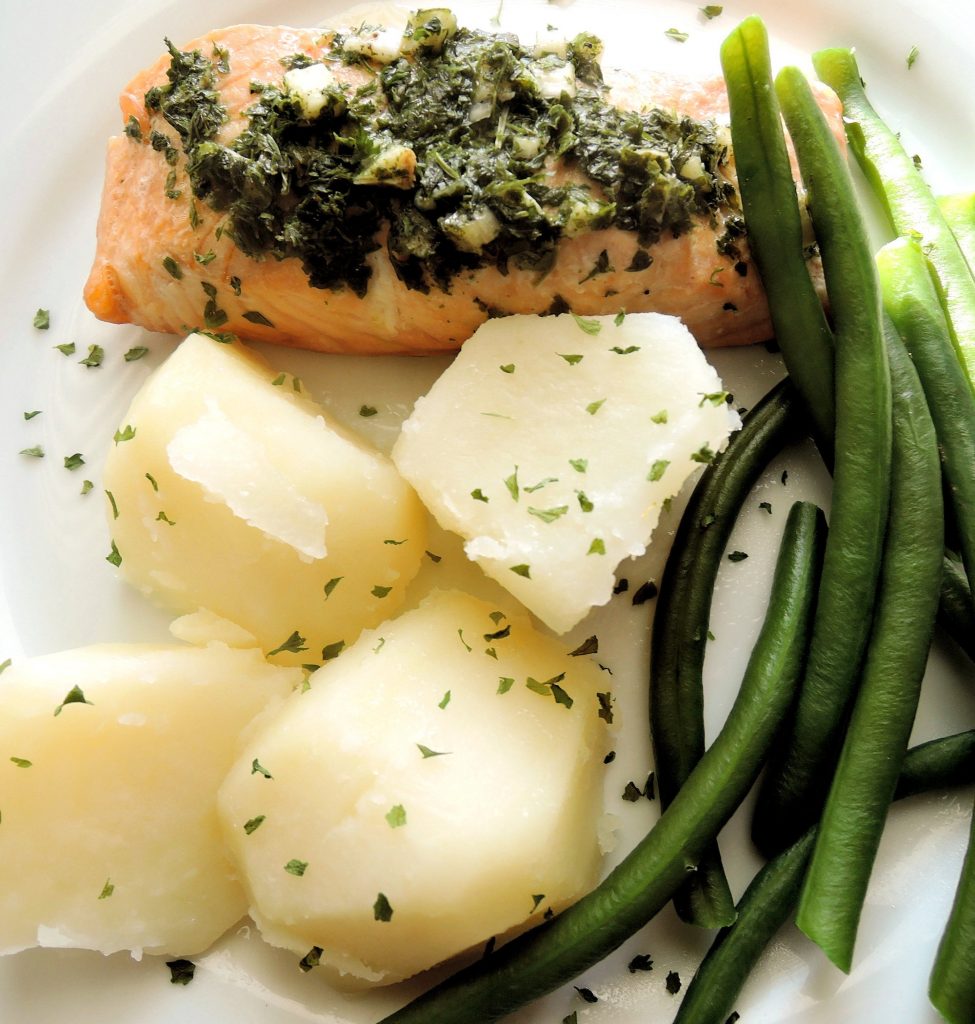 Side Dishes for Salmon

When I cook salmon, I tend to go with Atlantic varieties because they just taste a bit milder and smoother than wild salmon. It’s also lower in fat content, which means that this dish is pretty good for you.

For my salmon dishes, I love roasted potatoes.

This is one of the best side dishes for baked fish in general, and what fresh herb goes better with potatoes than rosemary? 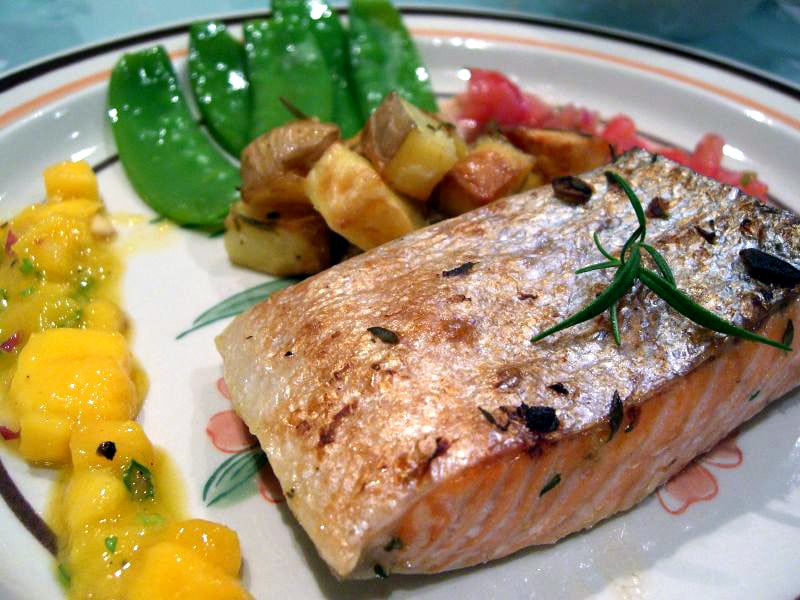 For this recipe, you want a very hot oven, so preheat it to about 400 degrees Fahrenheit. Slice the potatoes in half so that they have a flat surface to catch the seasonings, and toss them with the oil, the peppers, the garlic, and the fresh rosemary leaves.

Line a baking sheet with aluminum foil and place your seasoned and halved potatoes on top. When you’re placing your potatoes, make sure that they aren’t touching and are sliced portion up.

Roast them at 400 degrees for a full hour or until the skin begins to become very crisp and the tops are brown. Serve with your favorite baked salmon dish.

Side Dishes for Shrimp

When you’re making shrimp, you want to have a nice balanced side dish that will bring out the unique flavors of this often-overlooked shellfish. Shrimp is fairly versatile, so you can grill it, fry it up in batter, or boil it in the shell, but in my experience, one dish goes well with just about any variety of prepared shrimp: pasta. 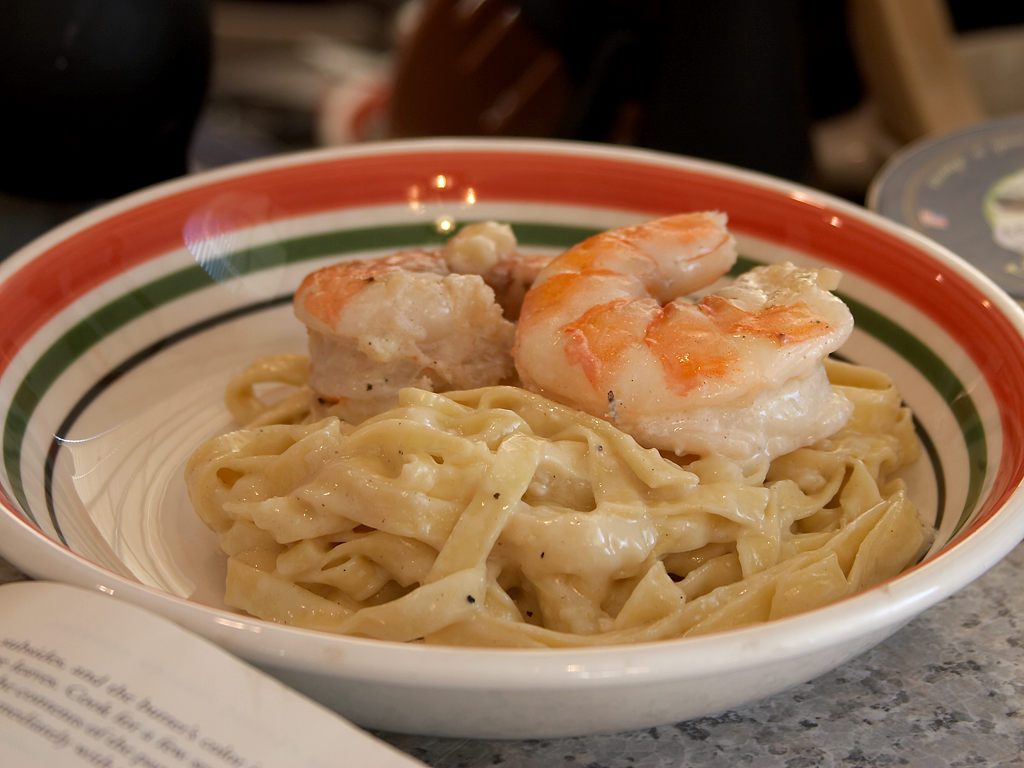 In a large pot, bring some salted water to a boil. Toss in the fettuccine noodles and let boil for about eight minutes. This should provide al dente noodles, but you can take them out a few seconds earlier if you like a firm texture. Drain all of the water out – you want fairly dry noodles at this stage.

In a saucepan, melt the butter and sauté the garlic and onions until the onions start to become translucent and the garlic becomes golden. Combine these cooked veggies with the remainder of your ingredients so that you get a fairly creamy sauce. Toss in the cooked fettuccine and serve with your shrimp dish. 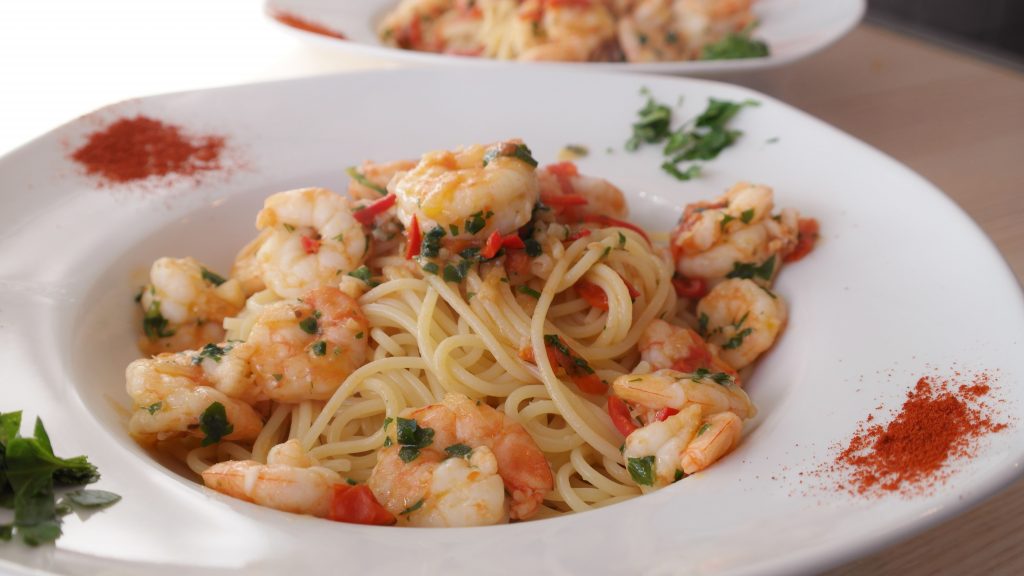 Side Dishes for Tilapia

Tilapia has become a very popular style of fish. Despite this, it’s also very hard to find fish that is flavorful and wild, so sometimes you end up getting tilapia that tastes bland. Fortunately, this is a perfect excuse to prepare a side dish with a lot of flavors to bring it all together. 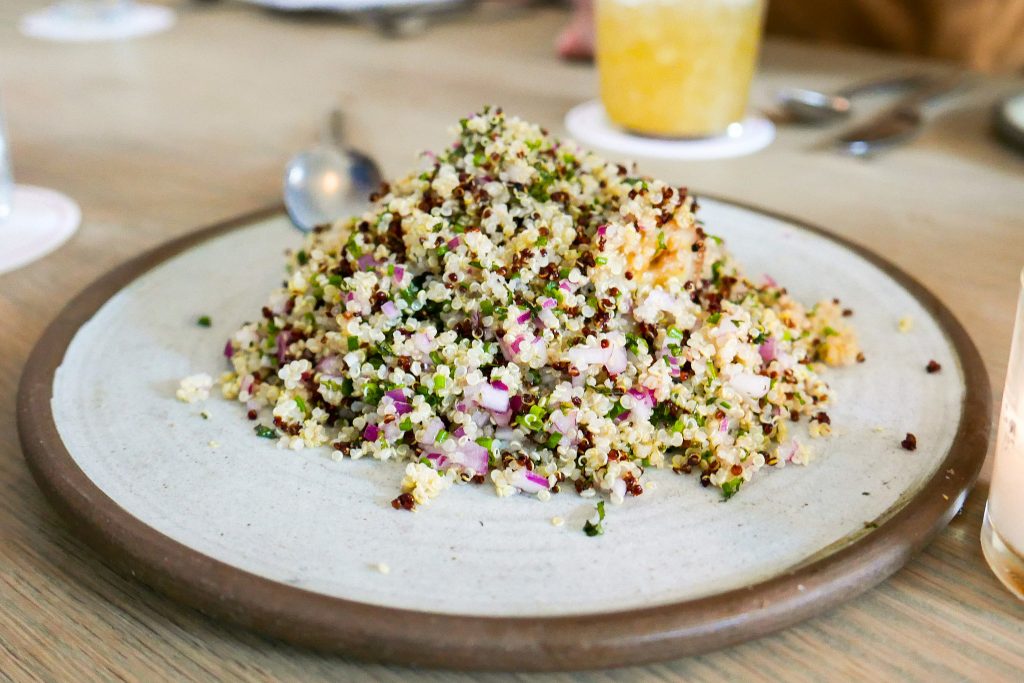 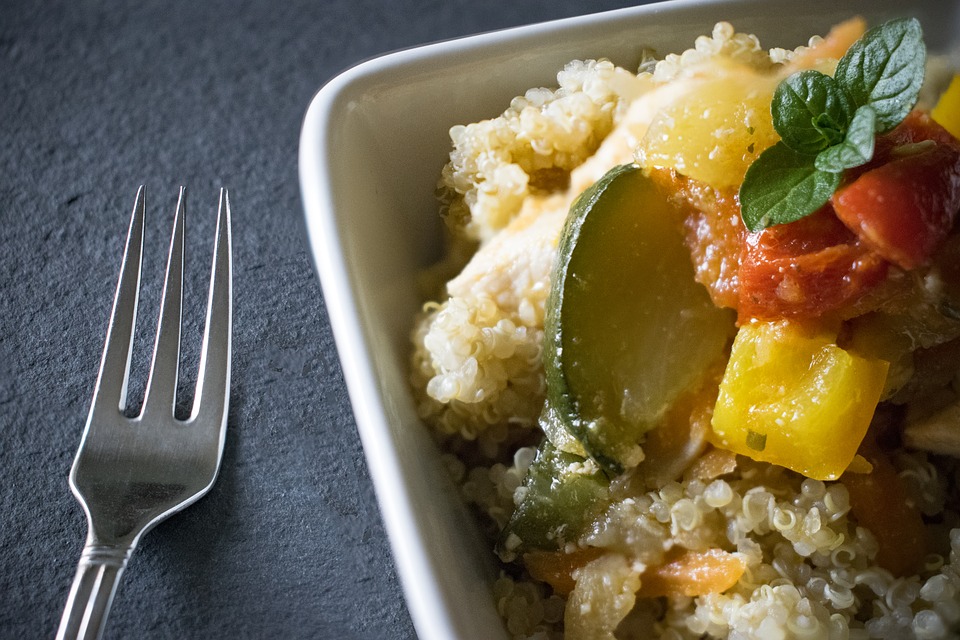 First, you’ll need to prepare the quinoa, so in a large pot, bring the two cups of water to a boil and add a pinch of salt. Place the quinoa in the water and allow it to cook, while covered, according to the package’s instructions, which typically will range from 12 to 15 minutes.

Once the quinoa is cooked, remove it completely from the heat and allow it to absorb any leftover water, which should take about five minutes. Once it’s absorbed, place the quinoa aside so that it has time to cool – you can also fluff it a bit during this time.

In a skillet, cook the bacon until it’s very crispy and drain it on a paper towel-lined plate. Once it’s cooled a bit, break this bacon up into pieces. In a separate bowl, combine all of the remaining ingredients, which include the cooled quinoa, onion, parsley, and basil. Let this salad sit in the fridge for about 15 minutes and serve with your favorite tilapia dish.

Side Dishes for Lobster

In many circles, lobster is considered the king of shellfish, and as a result, it’s often served with a plethora of expensive side dishes that are meant to wow, but I don’t always want to take it to that level. For this recipe, I’m going to double down on the seafood motif and show you how to make up my favorite scallops. 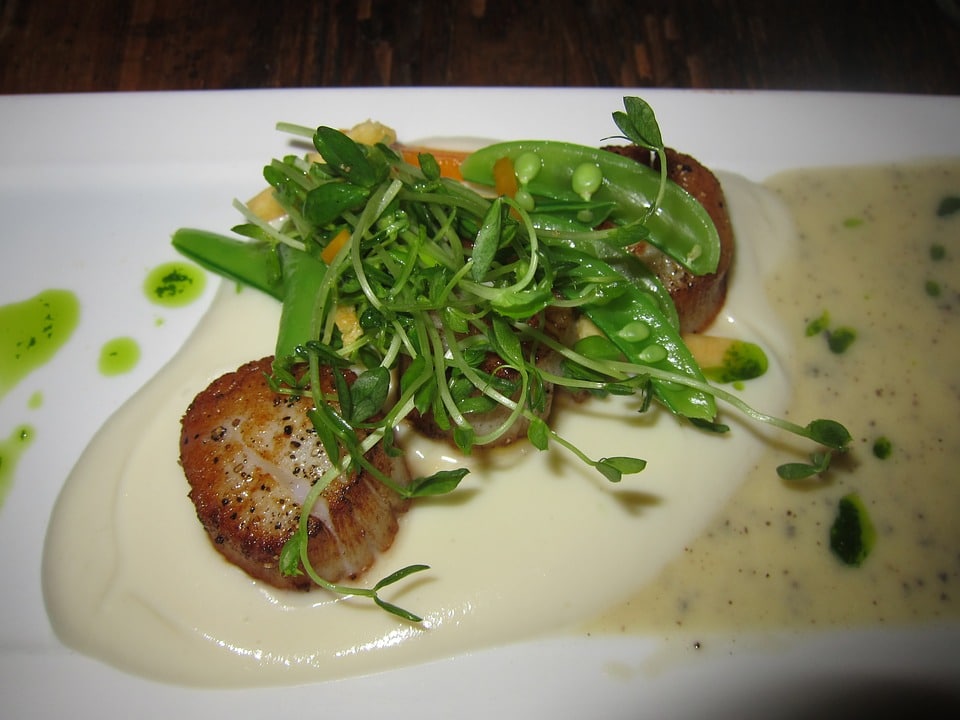 Pat the scallops dry with a dry cloth or paper towels and set aside. Heat a skillet with the olive oil over medium heat and place the scallops inside in a single layer. Dependent on the size of your pan, it may be a good idea to split the ingredients into thirds or even fourths. Season the scallops with salt and pepper to taste and cook until they are a dark golden brown. Transfer the cooked scallops to a paper towel-lined plate to drain. 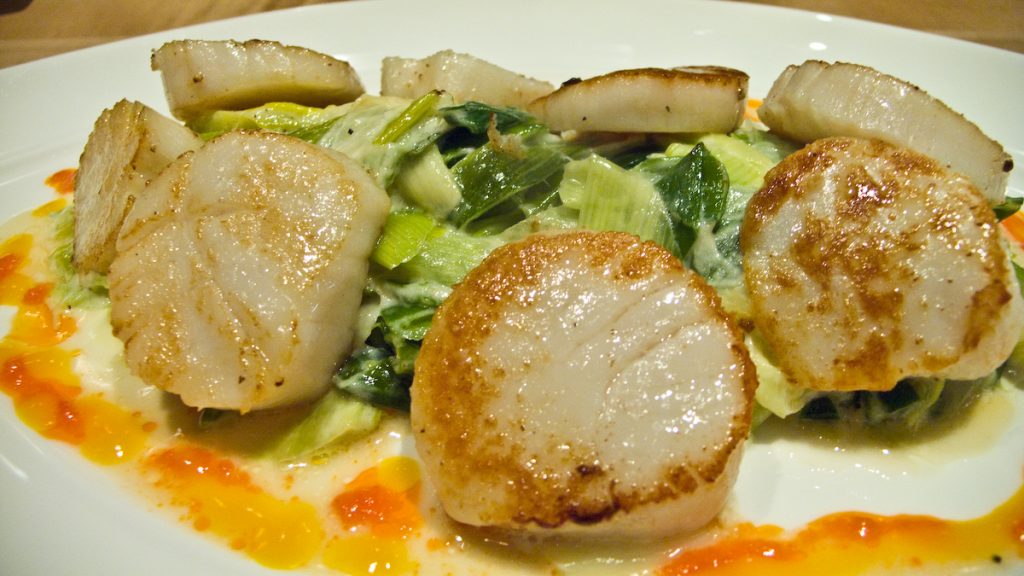 In the same skillet that you prepared the scallops, melt the butter and scrape any of the leftover scallop material from the bottom of the pan. Throw in the garlic and cook for about a minute. Next, pour in the chicken broth and simmer until the broth reduces by half. Next, pour in the cream and cook until it begins to get thick. At this point, your sauce is nearly complete – just add in the lemon juice and throw in the cooked scallops. Finally, garnish this scallop side dish with the basil and parsley, and serve with the lobster dish.

The Side Dish that Goes with Any Seafood

In my opinion, one of the best dishes that seems to go really well with just about any form of seafood is rice pilaf. I admit I came upon this realization as a result of being served so much pilaf with the dishes that I used to order at my family’s favorite chain seafood restaurant, but in any situation, I really feel that it’s the perfect seafood side dish.

Note: Even though pilaf goes with almost any seafood, this is one of the best side dishes for fried fish. 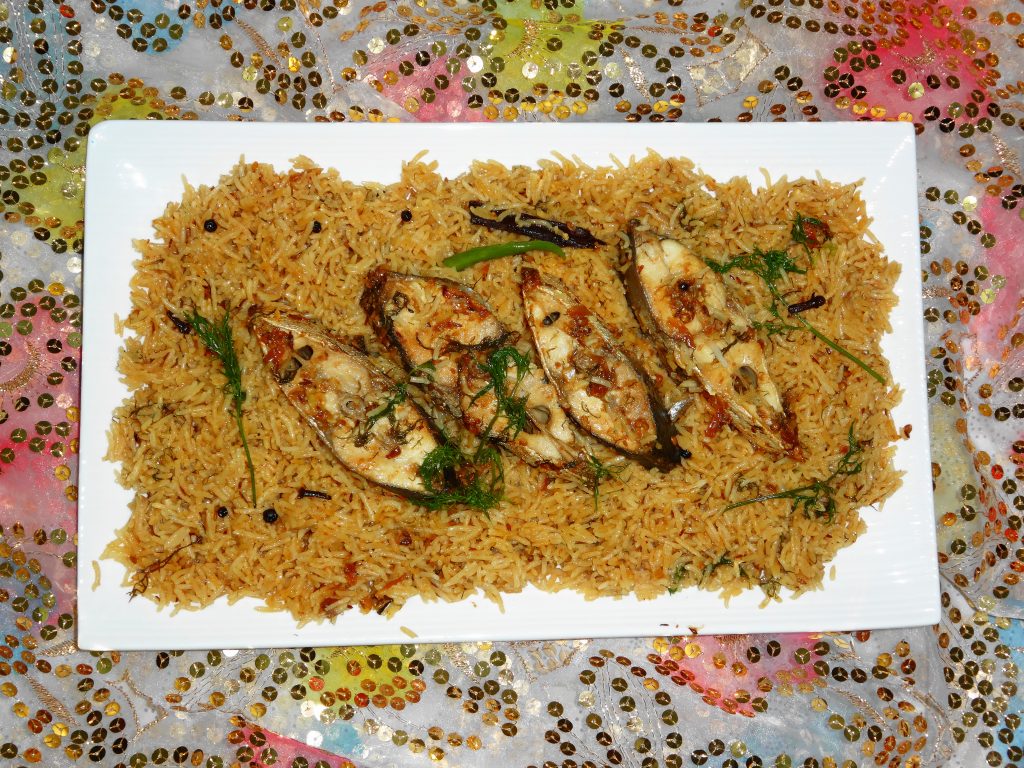 Prepare the rice according to the instructions or toss it in a rice cooker. While the rice is cooking, use a Dutch oven to dry toast the uncooked orzo until it is a deep golden brown and set it aside for later in a bowl. 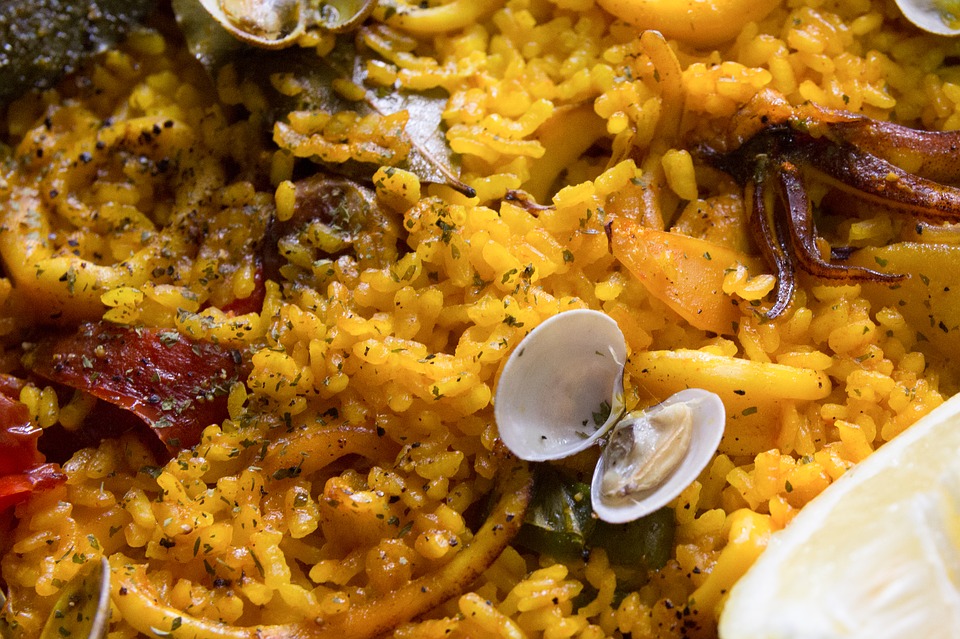 Thinly slice the mushrooms so that they are almost paper-thin, and heat a large skillet under medium-high heat. Add the finely sliced mushrooms to the skillet, and then heat until they have a spongy texture. In this same pan, add the onions and garlic and simmer until the onions start to become translucent. When this happens, add the cooked rice and simmer for about two minutes.

Next, add in the toasted orzo, the chicken broth, the almonds, the parsley, the salt, and the pepper to the pan. Reduce the heat and simmer at medium-low. At this juncture, you’ll notice that the broth has bubbled a bit, which is completely normal. Stir for a few seconds and then simmer for 30 minutes covered. Serve it up with your favorite fish entrée.

Vegetable Side Dishes for Fish

If you’re thinking to go with veggies for an awesome sense of variety, then you’ll be happy to know that there are a ton of options out there for you. While I find it easy to just pair most seafood entrees with an old standby like broccoli, you’ll also find that there are many other delicious veggie choices to pick that will go with a wide variety of fish. In this part of the guide, let’s take a look at some that are bound to make your guests truly satisfied. Just a note: some of these side dishes for seafood are salads.

Each of these relatively simple veggie dishes can make for spectacularly healthy side dishes for fish and all taste absolutely delicious!

I love seafood, and you shouldn’t have to fret over the best side dishes for fish dinners. Each of the recipes that I’ve posted here is fairly easy to make and work as excellent accompaniments for your favorite fish entrees. In fact, you can even mix and match some of the recipes that I highlighted here for a truly interesting dinner composition. 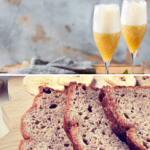 Monkeying Around with Fermented Banana 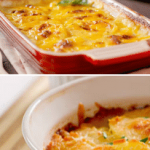