Mmmmm, spicy nacho cheese sauce over crunchy tortilla chips and topped with green onions, peppers and chopped tomato bits. My very favorite comfort food, perfect for watching television, for entertaining guests, and for distracting a crowd of children. In fact, it is hard to think of a time or occasion where it isn’t a delicious treat.

Spicy nachos can be made in so many different ways, but there are some things that every nacho recipe will have in common: cheese, peppers, and tortillas. The cheesy mixture will be spread over tortilla or corn chips. Spicy nacho cheese sauce is easy to make and can sometimes even double as a spicy nacho cheese dip.

Spicy cheese sauce begins with good cheese. There are several options for making cheese sauce, these include purchasing canned cheese sauce, using boxed process cheese, or adding grated cheese to a creamy white sauce. Each approach has its merits and its drawbacks. Your personal taste, the amount of time available, and the occasion are all likely to influence your selection.

This is the answer for unexpected visitors or event, with little time to prepare. It is exceptionally portable, which makes it a good answer for those workday dinner bring-a-dish luncheons. Brand names are mentioned but use the brand or type that is available in your area or that appeals to you. 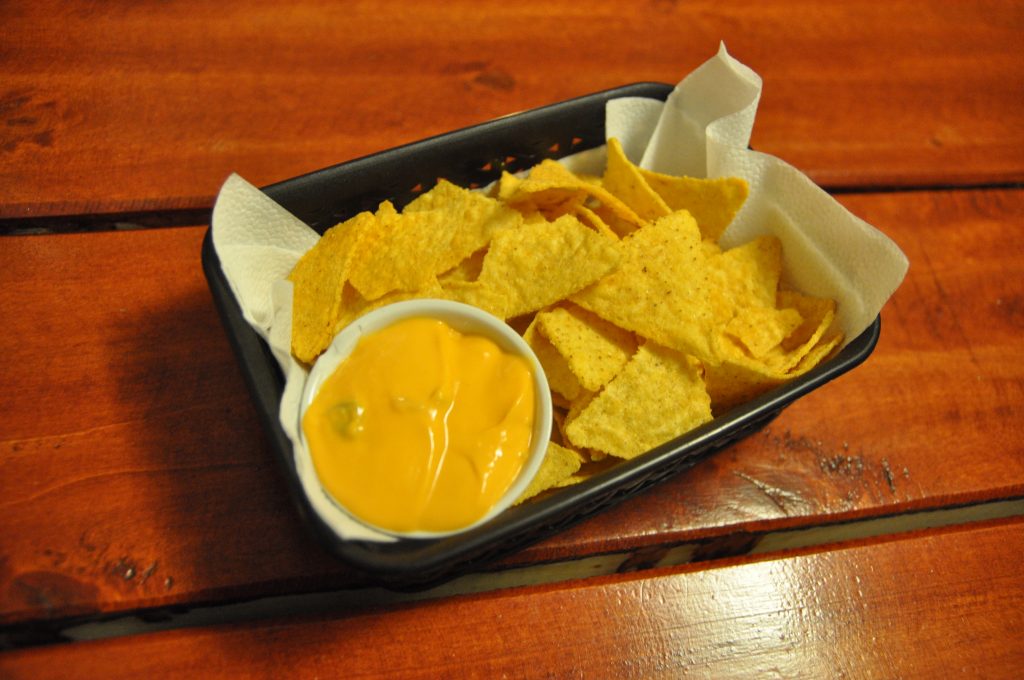 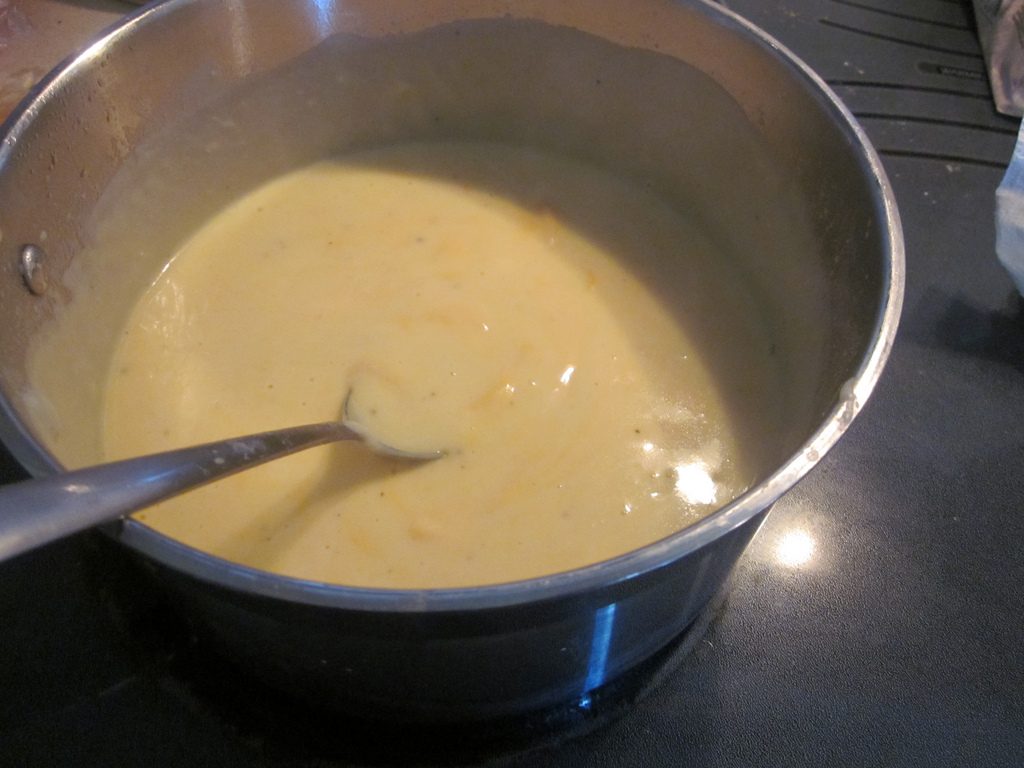 Empty the double cheese sauce into the pan and place it over low heat. Pour the ¼ cup milk into the cheese sauce bottle, put the lid on, and shake well to get the last of the cheese out. Pour the contents into the saucepan. Stir to prevent sticking or scorching. Open the can of diced tomatoes and add them. Stir until well blended, adding any additional spices desired. Cumin lends that authentic chili flavor, and the hot sauce can heat up your cheese sauce if the mild spices just don’t quite have enough fire.

When well blended pour into the crockpot and set it to “warm”. It should be just hot enough to keep the cheese melted.

In a pinch, if you have a crockpot with variable temperatures, you can combine the ingredients directly in the pot. Stir until everything is well blended.

Process cheese spread isn’t really cheese. There was a time when you could purchase a brick of soft, yellow cheese and get the real thing; unfortunately, those days seem to be behind us. Still, as a base for other ingredients, process cheese spread can serve. It tends to be higher in salt and fat than real cheese, and is probably a less healthy choice, but can fill a need, especially for a household operating on a restricted budget. 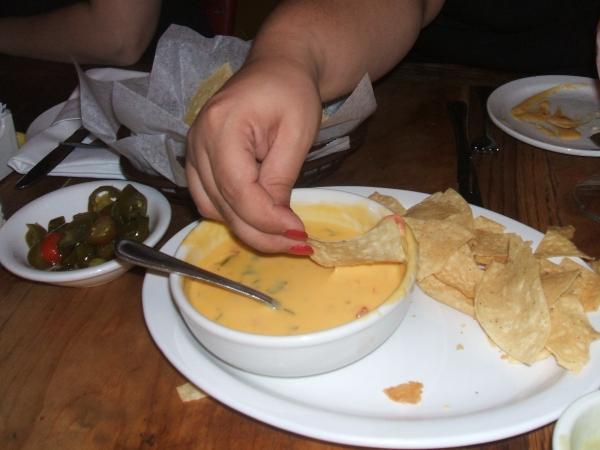 Start the water boiling in the bottom half of the double boiler. Place the top half over the hot water and pour the milk into it. Cube the block cheese into the warming milk and allow it to begin to melt. Add the diced tomatoes and stir until well blended. Pour the mixture into the fondue pot or small crock pot to keep it warm until needed. Alternatively, the sauce can be poured over cooked pasta or crispy chips as part of a dish.

Grate the hard cheeses and cube the cream cheese. Place the butter in a medium sauce pan to soften and add the peppers and onion. Whisk together until the vegetables are heated through, add the half and half, and bring mixture to a simmer. Whisk in the cornstarch and allow it to continue to simmer. Add the cream cheese. When it is melted, slowly begin adding the shredded hard cheeses until the mixture is smooth and creamy.

Serve over pasta, rice or crunchy chips. Top with the tomatoes.

To turn any of the above sauces into a spicy cheese dip, reduce the moisture or add a little extra cheese. Turn up the heat a little by adding some cayenne pepper or a little hot sauce. Make it more piquant by adding a dash of powdered mustard to the mix.

To make the chips extra special, warm them for a few minutes in a hot oven to give them a little extra crispness. Serve the dip in individual dishes, or in a central dish for generalized scooping. 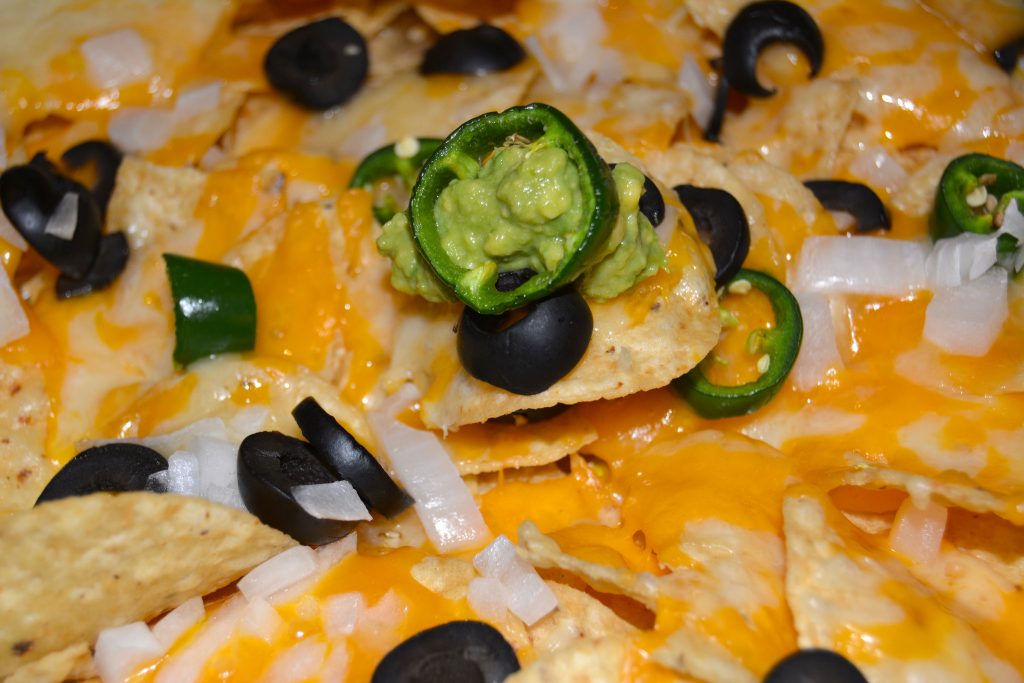 The supreme test for your spicy cheese sauce is to use it in your favorite Nacho recipe. But before you get out the double boiler, let’s take a quick look at the origins of Nachos and a few of the many variations.

The first nachos are credited to Ignacio Anaya, a maître d’hôtel who needed a quick snack for some officers’ wives who were on a shopping trip in Piedras Negras. Ignacio, whose nickname was Nacho, quickly invented a hors d’oeuvre that he hoped would appeal to them.

He cut tortillas into quarters, fried them, topped them with grated cheese and added a slice of pickled jalapeño pepper. When asked what they were, he said they were Nacho’s especiales. Eventually, they were simply referred to as Nachos. You can make these quick originals yourself.

Warm the butter in an iron frying pan or griddle. Place the tortilla quarters in the pan, one or two at a time, and fry until they are heated through on one side, flip and fry on the other. They should be lightly golden on both sides when you are done. Place the tortilla piece on a small plate, sprinkle with cheese and put the jalapeno slice on top. 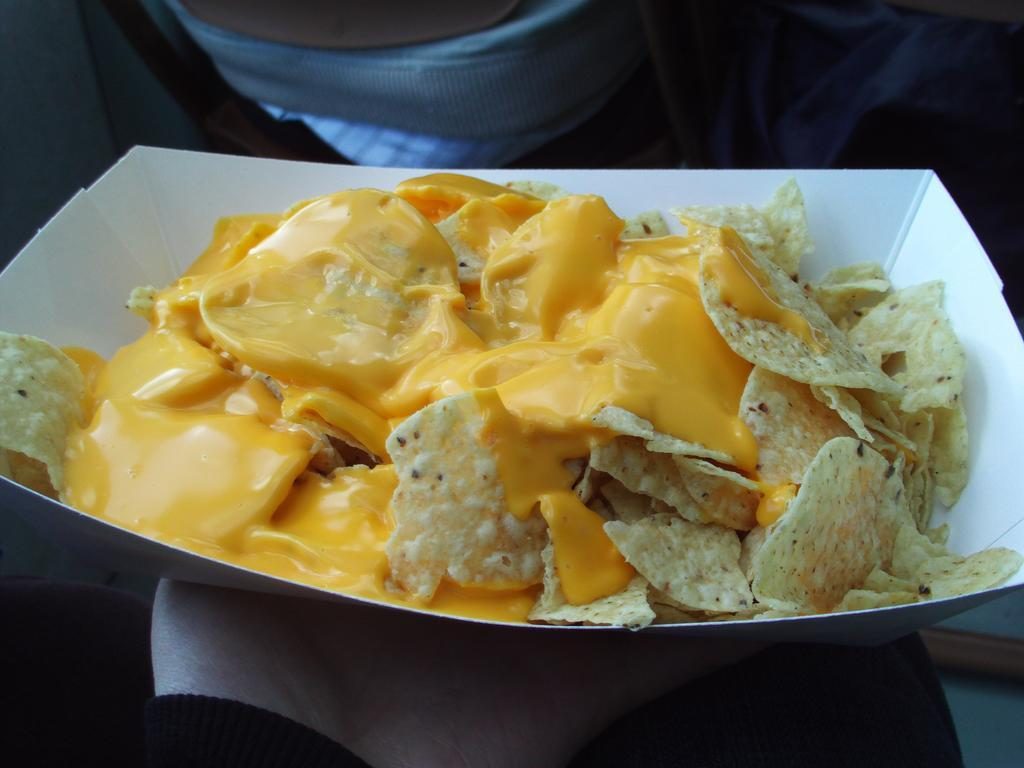 As nachos have traveled northward, milder forms of the original recipe have been invented. This nacho recipe can be served as a refreshing snack or as a meal.

Note: you can increase or decrease the peppers and change the spices to taste. 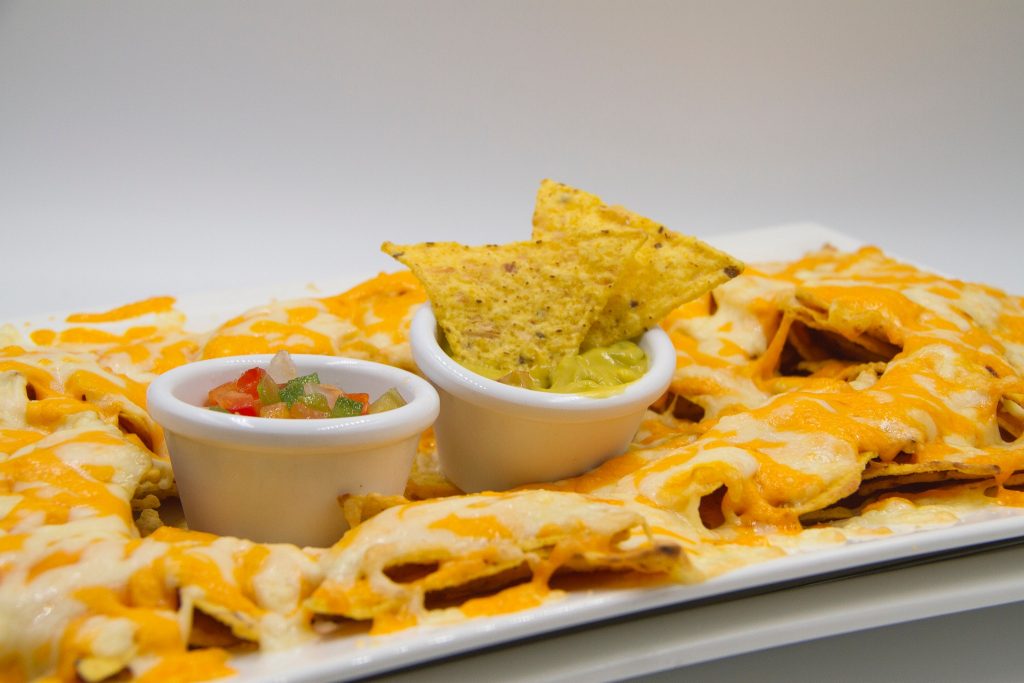 Place the chips on a large baking sheet, and heat in a warm oven for three or four minutes. While they are heating, cut up the peppers. When cutting hot peppers, it is a good idea to wear gloves. Be careful not to rub your eyes after cutting a hot pepper.

Brown the hamburger in a frying pan. Drain off the fat and add the seasoning mix or the spices. Add the spicy cheese sauce and stir well together.

Remove the chips from the oven and arrange on warmed plates. Ladle the sauce and burger over the chips, top with the chopped vegetables, or allow guests or family members to select their own toppings. Add a dollop of sour cream, if desired.

What makes a good nacho? It really depends on the person eating it. The basics of nachos are that they start with corn tortillas, or corn chips. There has to be cheese, and there should be something spicy. Once you have those basics down, you can add almost anything and still have nachos. You could even go so far as to make home made tortillas, which are always a treat. 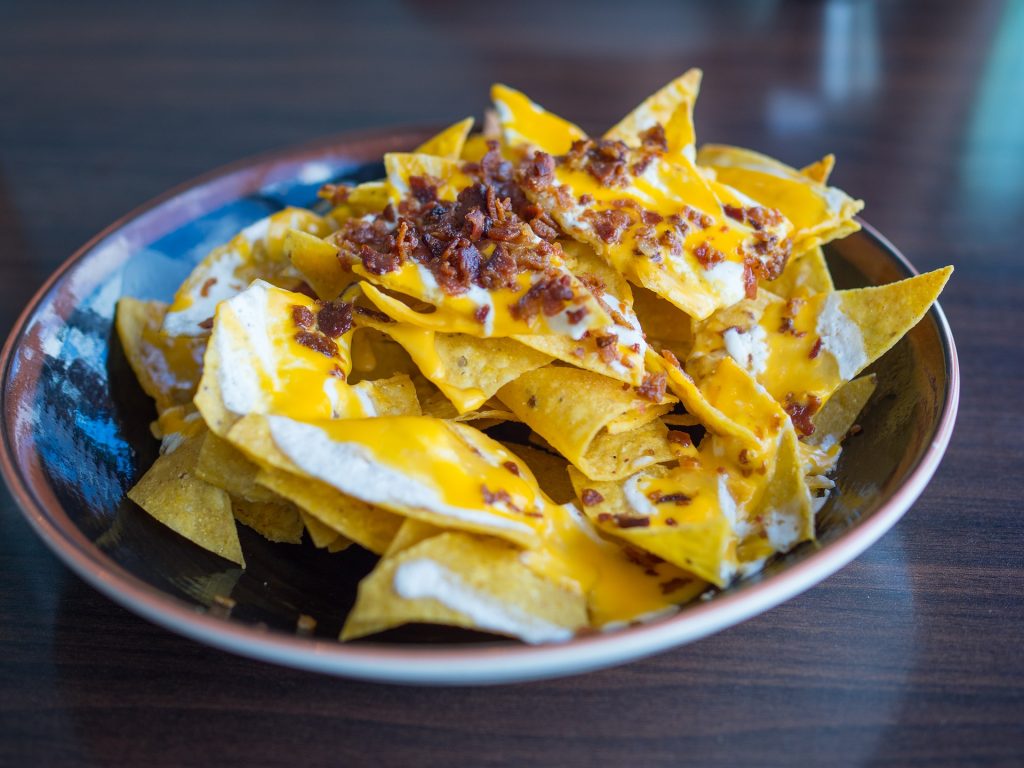 Put the masa harina in a wooden, ceramic or plastic mixing bowl, and begin to add small dashes of water. Stir it with a wooden spoon until the crumbs begin to adhere, then mix it with your hands. It should be stiff enough to form a soft ball.

Let it rest for about thirty minutes, then divide it into balls about the size of a large walnut. Flatten the balls. You can use a tortilla press, place the dough between two layers of plastic and roll with a rolling pin, or flatten them with your hands.

Cook on a hot griddle or iron frying pan, until golden brown on one side, flip over and cook the other side. As you cook them, place them in a bowl lined with a cloth towel and keep the stack covered. They will continue to cook in the stack. Serve from the bottom.

For nachos, cut the tortillas in quarters to form wedge shaped pieces. 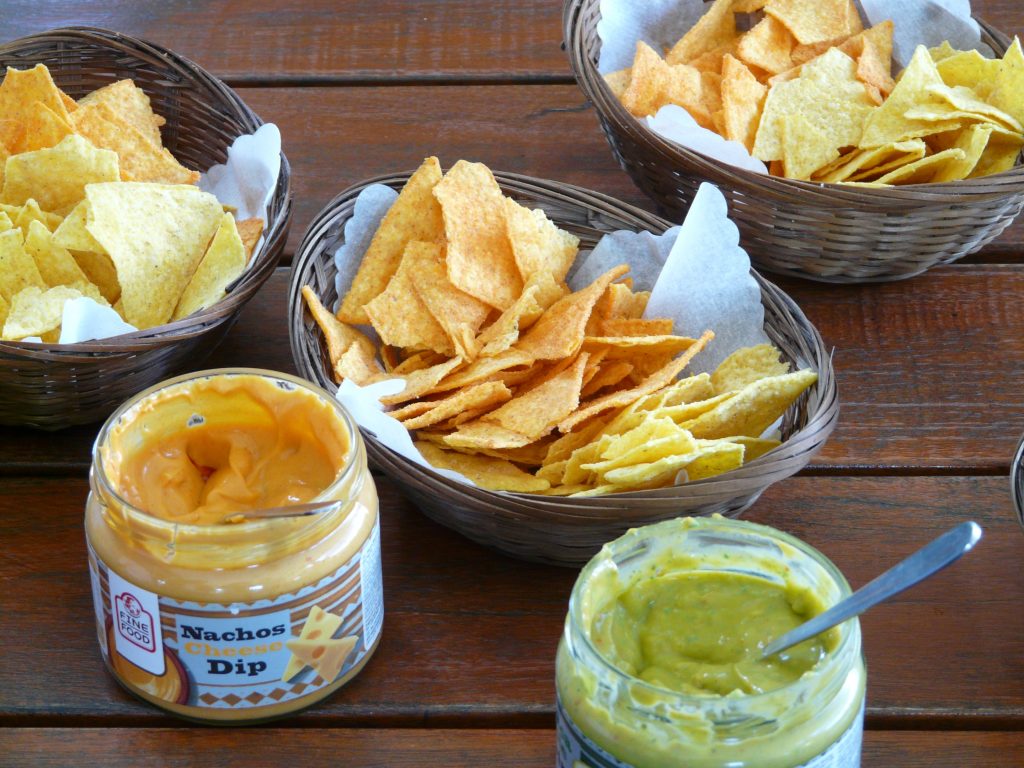 In a sauce pan over low heat, combine the butter and flour, stirring it with a wooden spoon. Cook until it develops a creamy texture, but not until it browns. Add the milk and continue stirring.

Slowly add handfuls of the grated cheese, allowing it to melt. This needs to be done slowly because cheddar tends to clump and become grainy if it is too hot.

Finally, stir in the spices.

Use the suggested ones or add some of your own if you wish. Pour the sauce directly on your tortilla pieces or keep it warm in a crock pot or fondue pot for family or guests to top up their own plates.

Nachos are sort of like pizza in this regard. There are some basic requirements to make the dish nachos, but there are so many possible variations that you could have nachos every night for a month and still have more ways to dress up those tortilla pieces and cheese. You can find time to try out the spicy nacho cheese recipes in this article, and you will never get tired of them. 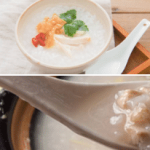 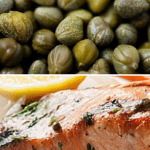