Tasting Kishka brought home the fact that I am a self-confessed food lover! So many great cultures with great food make me wish I could do a tour around all 195 countries of the world. To savor food from each culture – what a truly global experience that would be!

It reminds me of a quote by James Beard. “Food is our common ground, a universal experience.”  There is nothing like hearty homemade food to break down the barriers between strangers and turn them into friends. Food is the great leveler across all cultures and generations – this is what happened to me!

I first came across this delicacy when my Jewish neighbors invited me for a meal to observe the Sabbath. I had it as an appetizer, and after my first bite I was in love – it hit the spot!  It was hale and hearty soul food at its best, and I knew that my love affair with Stuffed Derma had just begun.

I thoroughly enjoyed it and still remember the first bite as if it were yesterday. Being the foodie that I am, I asked my hosts for the recipe and began experimenting and “voila!”, my Stuffed Derma journey began.

What is Stuffed Derma or Kishke?

So, what exactly is Stuffed Derma, and what makes it so scrumptiously delicious? Stuffed Derma is also known as “Kishke” which means intestine or guts.  It is also sometimes referred to as a Jewish sausage.

It is an ancient delicacy, traditionally of Jewish origins, although today it is eaten not just in Israel but in Europe and North America. As mentioned, it is made from beef intestines, stuffed with vegetables including onions, flour or matzo meal, chicken or goose fat (schmaltz), and baked.

Onions are crucial in this recipe as they infuse most of the flavor into the dish.  Some recipes sauté the onions in the salt, pepper, and paprika before blending them into the rest of the ingredients. 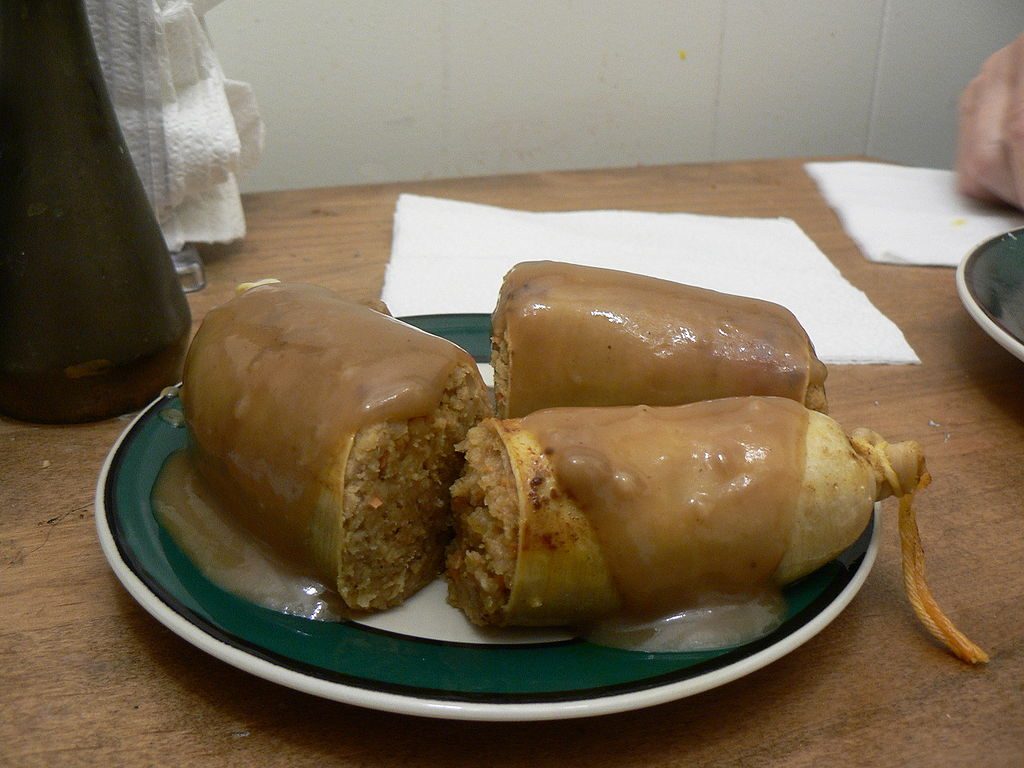 This dish has traveled with Jewish communities through the ages and is very popular in Eastern Europe amongst the Polish, Romanian, Lithuanian, Russian, and Ukrainian communities. But it is now made similarly to sausages and black pudding. In the USA, it is also popular amongst Polish communities, but Kosher versions leave out pork products.

History tells us that homemade Kishka was more about resourcefulness as it was made from leftover scraps of food. Just like the origin of pancake day, when all the leftover flour, milk, eggs, and oil were used up and turned into pancakes just before the beginning of Lent. Similarly, every last spoon of schmaltz, scrap of vegetable and bit of flour is used up to create something genuinely delicious out of leftovers!

I can’t think of a better thing than a recipe like homemade Kishka where you can truly make something beautiful out of nothing.

Stuffed Derma or stuffed kishke like most Jewish foods is a recipe that has been passed down from generation to generation. And with each passing, a new twist has been added to make it more modern and quicker to prepare without losing its Jewish roots and authenticity.

Modern versions can include rice, suitable for vegans and vegetarians, diced chicken livers and ground gizzard. Some recipes season the onions with paprika, salt, and pepper and then fry until slightly brown before blending with the rest of the stuffed derma ingredients to add more flavor to the overall taste. Despite the different varieties and modern twists, it is still a Jewish food for the soul!

On a different note, please don’t be put off by the intestines – Stuffed Derma is to Jews what Haggis is to the Scottish, and Black Pudding is to the English. Just think sausages, and you will be alright, as traditionally sausages are formed from a casing made from the intestine! 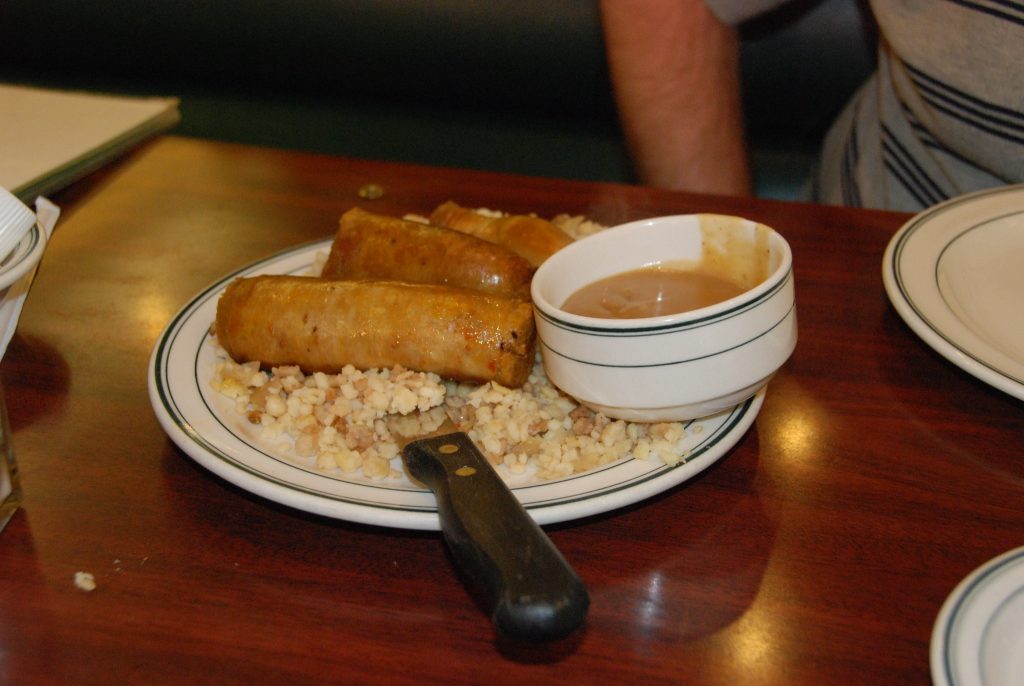 However, if you do not relish the idea of eating intestines, they can be replaced with inedible synthetic castings.  The blended ingredients result in a dough-like texture, which can be shaped into a log using foil or parchment paper and then baked. It will not lose any of its appeal taste-wise.

As you can imagine, the varieties of Stuffed Derma Kishke are as varied as the different Jewish communities across the globe. Depending on who you ask, there are many different recipes and ways of making stuffed Kishka.

I hope I have whetted your appetite enough to tempt you into trying out one of the two recipes below (dare I say both recipes?!) Both have a modern twist to them, but according to my Jewish neighbors who sampled both recipes, they are “just the way grandma makes it”!

The first recipe is a simpler version of the traditional dish but just as tasty. Animal fat or schmaltz is usually used with a few vegetables, while the second one is a vegetarian kishke, which is suitable for vegetarians and pescatarians. Both recipes use foil and parchment paper to replicate the traditional shape formed by beef castings.

Alternatively, you can bake for 90 mins, then unwrap from the foil and parchment paper and bake for a further 15 to 30 mins until brown and crispy. 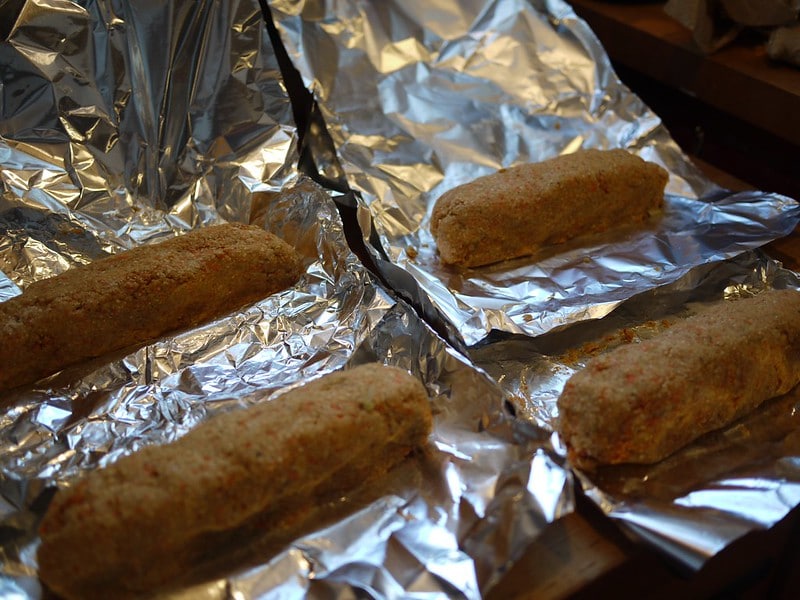 For the vegetarian version, you can use coconut oil or olive oil.

Stuffed Derma Kishke can be cooked in Cholent as well. Some recipes I have seen add brisket scraps to the mixture to give it an added flavor. Stuffed Derma Kishke is traditionally served as a starter or appetizer at Jewish Weddings, Bar Mitzvahs, Shabbat and other Jewish holidays.

Others boil the Stuffed Derma first before baking for about a quarter of an hour. Although this is a more traditional method, the downside is that it can be pretty tricky to stop the mixture from seeping out into the water. White sewing thread has been known to be used to tie to each end of the sausage-shaped dough, very tightly to prevent it from leaking through. Choose the recipe and version that is most convenient for you.

How to Serve and Eat Stuffed Derma Kishke Stuffed Derma Kishke is traditionally served as a starter or appetizer at Jewish Weddings, Bar Mitzvahs, Shabbat and other Jewish holidays. Both of these homemade recipes I’ve described can be served as a starter or side dish with Cholent. And the vegetarian kishke can be eaten as a meat substitute for the main course. Once baked, you can store the Kishke in a fridge for up to 3 days.

It can also be eaten in a variety of non-traditional ways, and not just with Jewish stew or Cholent.  It can be eaten as a burger topping (I can almost hear all the Jewish grandmas shout a resounding “no!’). Also, it can be stuffed in chicken breast or eaten with salad. You can also drop it into a bowl of your favorite soup, or eat it with freshly baked bread rolls.

They say curiosity killed the cat. But, in my case, my curiosity with Stuffed Derma kishke has led me on a whole new journey of not just aromas and flavors, but of history and culture. And who better than my Jewish neighbors to confirm that this has paid off when I see them thoroughly enjoying the different varieties of Derma food I’ve prepared.

They are proud of their heritage and culture. Proud of the fact someone with no Jewish heritage would take such delight in their food. So, go on, be adventurous, and try it out! Happy baking! 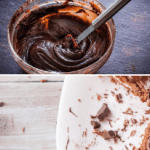 This Brown Derby Cake Will Win the Race! 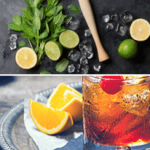