What is a good leek alternative? Leeks are a somewhat confusing vegetable that people misunderstand and misuse on a regular basis. They are the relatives of onions, shallots, scallions, and ramps. Often, people think that they are just onions, especially when they have been chopped up.

They are also fairly difficult to get. Many grocery stores won’t carry them or if they do carry them, they don’t last very long. This is likely due to the fact that not many people will buy them, they don’t have the longest shelf life, and they aren’t easy to spot amongst the other greens.

So what can use a replacement for leeks in recipes? How much will you need to get an accurate substitute? There are, surprisingly, quite a few different things that you can use as substitutes. Some will give you a different texture or a slightly different flavor whereas others are more direct substitutes 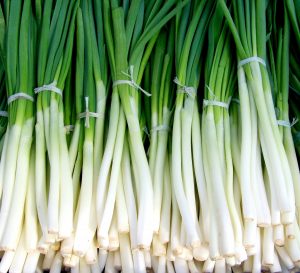 Leeks are interesting plants that are related to garlic and onion, even though it doesn’t have quite as much flavor as they do. Leeks look like an extremely large scallion.

Leeks aren’t used all that frequently, but when they are, they are used in soups and other cooked dishes. Some people will cook them on the side and eat them alone.

If you want to try raw leeks, only eat the whitest portion of the bulb.

Leek Substitutes – Which Ones Are The Best?

Most recipes that call for leeks will call for a specific number or, if you are lucky, you will get a measurement in ounces. In recipes, you only use the light green and white parts because the darker greens are far too hard for your body to process. You can use those for soup or you can compost them.

But what about if you don’t have leeks at all? Here are some of the best substitutes for leeks:

If a recipe calls for leeks and you don’t have them, you can substitute mild sweet onions or green onions. You should test them before you use them to ensure that they aren’t too strong. With these substitutes, you can sub in one for one by weight or by volume. 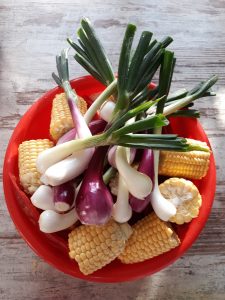 If you don’t want to use onions, you can also sub in shallots. These won’t have the bite that some leeks will have, but you will get an additional garlic flavor. You can sub one for one by weight or by volume here as well, or got a little bit over if your recipe doesn’t have a lot of other flavors in it.

If you don’t have any other options, you can use onion powder in your recipes. These won’t give you any substance in your recipe, so it won’t work for recipes that are primarily leeks. Instead, it works well in soups or stews when leeks only make a percentage of the ingredients.

To sub in onion powder, use one teaspoon of onion powder as a substitute for one cup of raw, chopped leeks.

Just by looking at leeks and celery, you might think that they are a great substitute for each other. Unfortunately, this isn’t the case. You may be able to substitute it in some recipes, but celery does not act like leeks do, especially in soups and stews. 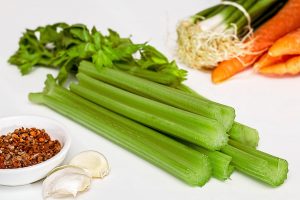 Celery tends to breakdown and gets mushy much faster than leeks. If you are using them as a replacement, you may want to check on the cooking times to see what works best.

Leeks are also known as wild ramps, so if you do see those in a supermarket somewhere, you are probably looking at leeks. There is such a thing as a wild ramp, but you usually don’t see it anywhere in the Western world.

Even if you do see true wild ramps, you can substitute these into any recipe with leeks directly. If they call for a specific amount, you can just transfer it over.

The best and closest leek substitute that you can get almost anywhere is a scallion, also known as a green onion. You can use this in recipes that call for fresh leeks, such as salads. Certain scallions will have a slightly stronger taste than leeks, but you should be pretty safe.

In cooked recipes, scallions do have a slightly different texture, but you should be safe using them as a substitute for leeks as well. 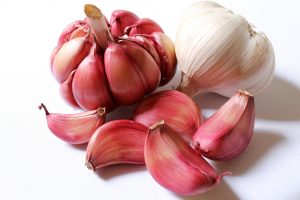 Garlic is quite a bit stronger and more pungent than leeks are, but if you only need to use them for flavor, it can be a worthy replacement. Use a small amount of chopped or roasted garlic can help to add the flavor and aroma in many dishes.

Once again, this won’t work if you are trying to keep the same texture or amount of leeks, but it can work in a pinch.

What Should You Look For In A Leek Substitute?

When you are trying to find a leek substitute, there are a few different things that you want to think about. Leeks are very closely related to many of the vegetables and spices on the list above, including onions, garlic, scallions, and shallots. However, they have a different flavor and feel in the mouth.

Leeks are mild and have a very firm texture, which is why they are so commonly used in rich and creamy dishes. They often offer a contrast to some of the other ingredients in the recipe. Most will only use the dense white stalk at the base instead of the green leaves at the top.

If you have a recipe that is a soup or that has a ton of other fresh ingredients, you can worry less about the substitutes. If it is a side dish where leeks make up the majority of the dish, you will have more trouble with finding a direct substitute.

Why Should You Try To Find Leeks?

While you can use those substitutes if you are in a pinch for time, you should try to find leeks if you can. They have quite a few different health benefits that you won’t be able to find with the leek replacements on this list. 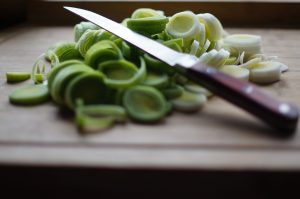 Leeks have flavonoid antioxidants, which can actually help to protect your blood vessel linings from damage. They are some of the best foods to get this protection.

If you have high cholesterol levels or you have a fatty liver, leeks have also been shown to improve your lipid profile.

If you see leeks in a recipe, don’t worry if you don’t have the time to search for them or you don’t want to go to the grocery store. While nothing will taste exactly like leeks do, you can use these substitutes in a pinch.

If you have a recipe that you really want to get right, you might want to try it a few different ways if you really cannot find leeks.

Luckily, you won’t have to worry about ingredients reacting strangely since leeks are mostly water. 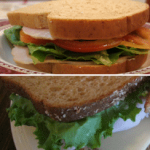 How Many Calories Are In A Turkey Sandwich 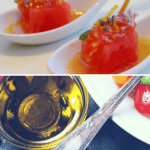