No matter why you need a substitute, you are in luck that there are a few different options that will give you the same texture or taste as poppy seeds do.

What Are Poppy Seeds? 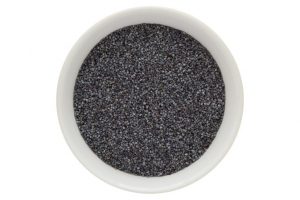 Most poppy seeds that you will see in recipes are black poppy seeds, though they can sometimes look gray or even blue. They are tiny seeds that are used to top breads, bagels, muffins, and more. They can also be used in fillings. Often, they will be combined with other spices.

I love to use them as part of a homemade “everything” seasoning that I use on everything from avocado toast to potatoes.

Black poppy seeds are common in the United States and European cooking, while Indian cuisine will use white poppy seeds.

Poppy seeds have Omega-3 acids, can help to keep your heart healthy, have analgesic effects, decrease cholesterol, stabilize blood pressure, help fight against cancers, boost your immune system, regulate digestion, prevent kidney sones, give energy, and even add a bit of protein to your meals.

From a nutritional standpoint, poppy seeds contain many minerals like iron, copper, potassium, calcium, manganese, zinc, and magnesium. When trying to find a substitute for poppy seeds, we kept these facts in mind as we know many people try to make recipes that are healthy and part of a balanced diet.

(Even though baked goods probably aren’t included in that category.)

Where To Buy Poppy Seeds

If you are looking for a substitute for poppy seeds because you don’t know where to buy them, you are lucky. Poppy seeds are easy to find in the spice aisles or seed section of most grocery stores. You shouldn’t buy them in bulk because they have a very, very high oil content and they are likely to go rancid. It is best to buy them only if you think you will need them for a recipe.

If you don’t like poppy seeds or you just don’t want to buy them and instead want to use your spice rack, there are a few different options that you can choose from. Many recipes will only use poppy seeds as a decoration or a topping, so you may be able to eliminate them altogether. If they make up a bigger part of the recipe or there are few other ingredients, then you will need to find a substitute for poppy seeds.

Unfortunately, there aren’t that many ingredients that will substitute for the taste and texture of poppy seeds. You are more likely to get one or the other, so you will need to figure out which one is most important to you.

Regardless, here are our choices for the best substitutes for poppy seeds in most recipes: 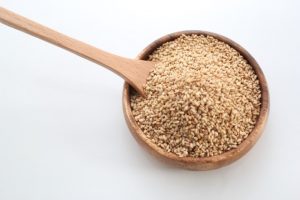 Toasted sesame seeds are going to be your best substitutes for poppy seeds. They are light and nutty, just like poppy seeds are. If you have regular sesame seeds, toast them to enhance their flavor and make them even more like a regular poppy seed. If you can’t toast them, you can still use untoasted seeds but they won’t be as close.

With sesame seeds, you are getting a flavor that is extremely close to that of poppy seeds, but you won’t get the same feeling. Sesame seeds tend to be a bit bigger and coarser. You can try to cut or squash them.

Chia seeds have increased in popularity over the years because of how healthy they are, which is why you are more likely to have chia seeds than you are to have poppy seeds.

They look and taste similar enough to poppy seeds that you can use them in most recipes. They are small, dark, and have a bit of a crunch like poppy seeds do. They work best in dry applications like on muffins or as a topping to the surface of a bread. One thing to consider is that some people think that chia seeds are too crunchy.

Remember that chia seeds do absorb liquids and they will expand because they have so much fiber. When they are mixed with a liquid, they slowly become a gel that you can use as a binder or to make chia pudding.

Unfortunately, this can complicate their usage as a substitute for poppy seeds. You will end up having a chewy, slimy flavor instead of a crunchy one. It can be a bit jarring if you make this mistake, so you should probably save this substitute for recipes where you don’t have a lot of moisture.

If you don’t want to use either of those options, you can also use nigella seeds. Nigella seeds come from a flowering plant that is actually in the buttercup family. If you were to see these next to poppy seeds, it would be difficult to tell them apart.

However, nigella seeds are much harder to find than poppy seeds are. They are limited to mostly Indian cuisine and they aren’t found in most grocery stores. Even so, they have a unique flavor that will make them a good poppy seed substitute in savory dishes. They do have a bit of an onion taste, so they might not be great in baked goods. However, many naan recipes will traditionally call for nigella seeds, so you can use them in certain baked goods.

Another good alternative is hemp seeds, which you can use in a pinch if you are willing to do some extra work. Take your hemp seeds and grind them so that you get a texture that is similar to poppy seeds. They will not look like poppy seeds (you probably won’t even see them at all), but they do have an incredibly similar taste.

Hemp seeds are probably best used in recipes that call for poppy seeds in the filling.

Flax seeds are another great alternative if you are looking for even more health benefits. However, flax seeds will not look anything like poppy seeds and can actually be a bit of a turnoff on the top of breads or muffins. 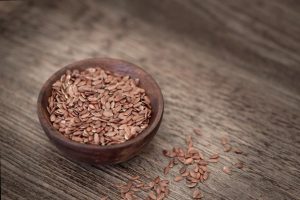 If you need to mix the poppy seeds into the recipe, then you can use flax as a substitute.

Flax seeds have a good taste, but they aren’t very strong. You won’t be able to use them in recipes where you want a really nutty flavor. However, they will be a good option to add some crunch.

To be honest, as someone who bakes and cooks on a very regular basis, I never really understand the need for poppy seeds. They do not have a lot of taste on their own and they really only add color. Add in the fact that you always get people making opium jokes or quoting that aforementioned Wizard of Oz line, and it just doesn’t seem worth it to me.

They add some good color and visual interest, but that’s about it. 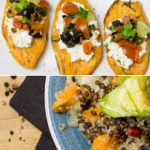 Jamaican Pum-Pum Yam: What Is It & How To Cook It