Dishes made with vinegared rice, vegetables and seafood are generally referred to as Sushi-like Tekka maki. They are only referred to as sushi rolls when seaweeds/nori is used to cover them.

Are you one of the Sushi newbies? Do you want to know more about tekka maki? Need a guide on its recipe? Do not worry, I have got you covered.

Tekka Maki or Tuna rolls are one of the most consumed Hosomaki sushi in Japan. Hosomaki or sushi rolls are meals made of sushi rice, fish – gu, nori – algae, gari-ginger, kan-crab, shrimp – ebi & amaebi and some other seafood. Tekka Maki is prepared with high nutritional ingredients which make it a medicinal and tantalizing meal.

Technically, preparing Takka Maki is not a complex task; it is made and served in small rolls that are covered by nori sheets. This is just a preamble; there are more things I need to inform you about Tekka Maki.

What is Tekka Maki?

Before delving into the benefits and how to prepare Tekka maki, let me inform you about Tekka maki. Tekka Maki is one of the various subtypes of sushi appetizers. It is under a variety of sushi called Hosomaki. Homosaki rolls over the years are earning more reputation because they are snacks which are simple and light to consume.

Hosomaki in the English language means “thin roll“. From this, it is apparently the word was formed from its shape which is cylindrical and having up to diameters of 2.5. Under Hosomaki sushi, there are other types which are Kappamaki, Negitoromaki, and Tsunamayomaki. Out of them, the most consumed in Japan is Tekka maki. Tekka Maki or tuna rolls means “red hot iron” the name is derived from the tuna’s color. 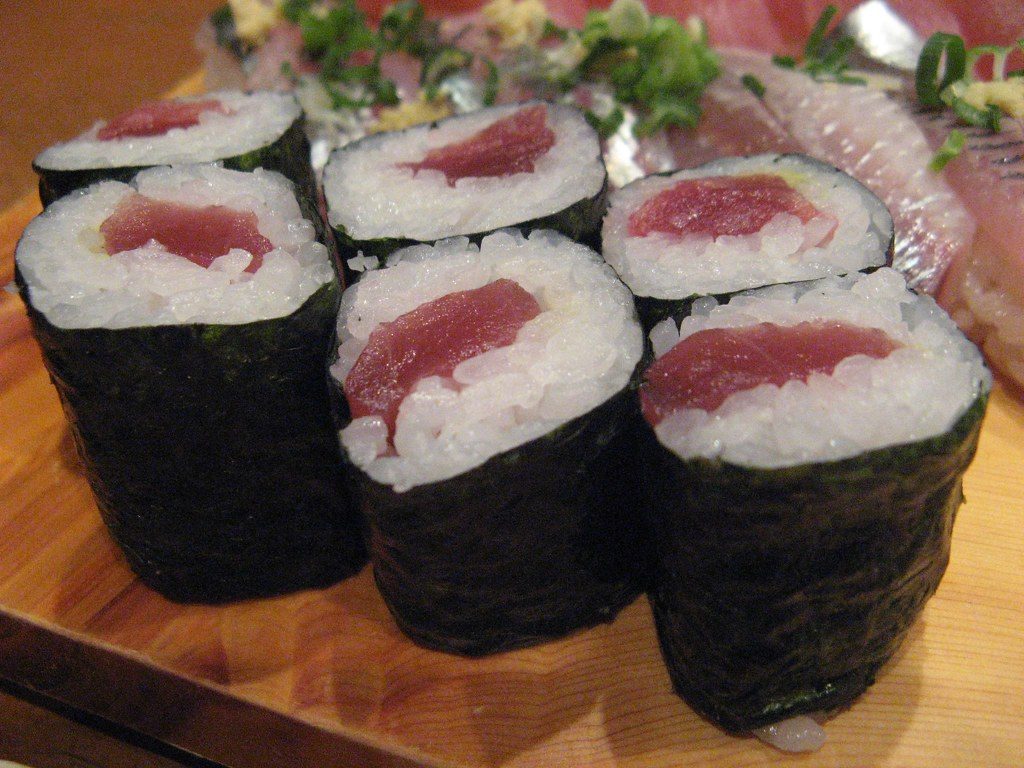 Today, sushi roll which has its origin in Japan has been flavored and changed in ingredients and additives in other parts of the world. Outside the Japanese borders, we now have different varieties of sushi rolls such as Philadelphia roll, California roll, Hawaiian roll, Alaska roll, British Columbia roll, and many others.

People from these countries in preparation of their sushi rolls add some ingredients which may not necessarily be in the original sushi roll – Tekka maki. Some of these ingredients are avocado, salmon, mango paste, cucumber, cream chess, and many others. Below are some of the ingredients of Tekka Maki;

What is in a tuna roll?

There are three basic ingredients you will need for the preparation of Sushi roll, I would list and give every important detail on each ingredient which are;

Sushi Meshi: Sushi Meshi is also referred to as Gohan. It is a making of Japanese rice of little white grains. The preparation is done with salt, sugar, and vinegar. After it’s preparations, when it is cool it is then stuffed in sushi which conforms and makes it sushi-meshi. 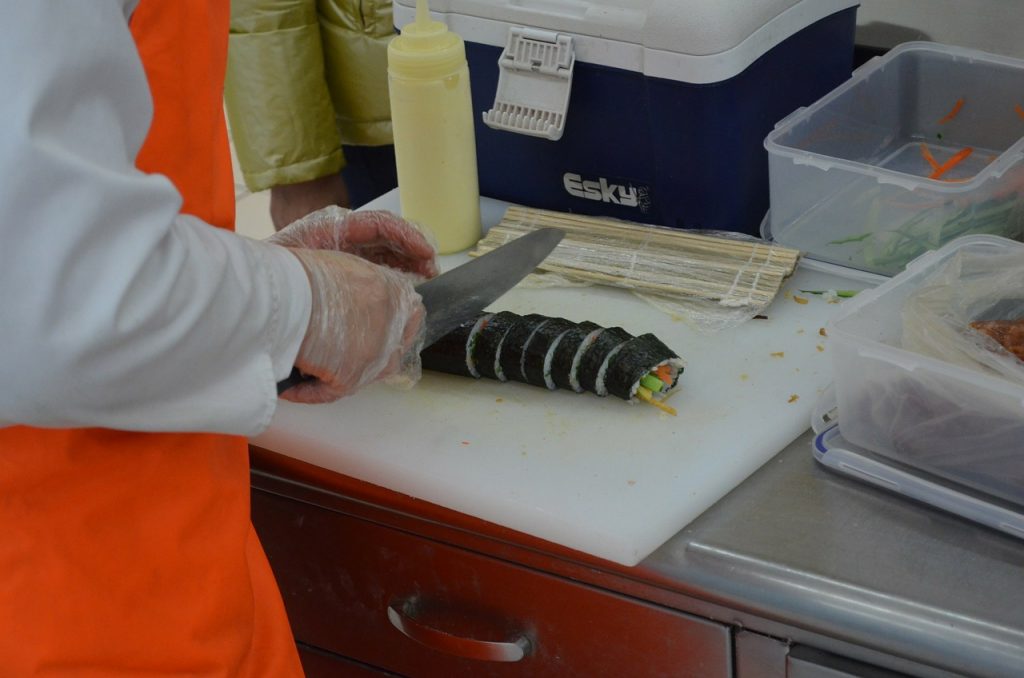 Sushi-meshi in different destinations and residents is made in different forms because of different culinary methods in its preparation. An evident difference is the method of wrapping the rice. Some places use more sugar while some use more salt. An example for the former is West Japan while for the latter is East Japan.

Nori: Nori is a black sheet of seaweed which is used for wrapping the sushi. In preparation of the sushi, different sizes of seaweed sheet are required for different types of sushi. For Hosomaki, the variety that Tekka Maki is under, just half of a full-sized sheet is required unlike a variety like Futomaki which requires the full sheet of Nori or Gukan which requires smaller sheet than the two.

The sheet of seaweed is a snack on its own.

It can be eaten independently. They are made in two varieties; it may be salt concentrate or flavor concentrate. For quality and desirable outcome, seaweed made with salt is more preferred than the flavored.

Gu: Gu is all the interior additives in making Tekka maki. They are different types of fish. While preparing, fresh/raw fish, as well as cooked fish, are used but the quality and quantity of the raw fish should supersede that of the cooked one.

There are no specific fish to be used but as peculiar to your region or destination. But some general of these fish are; Tuna, Yellowtail, Snapper, Mackerel, Salmon e.t.c. Apart from fish, other ingredients for interior usage in preparation of sushi are seafood such as shellfish of varieties; prawn, scallop and abalone, sea urchin-Uni, Anago and unagi(ell) Roe(masago, ikura), Octopus, pikes conger(hamo), shrimp and many others. 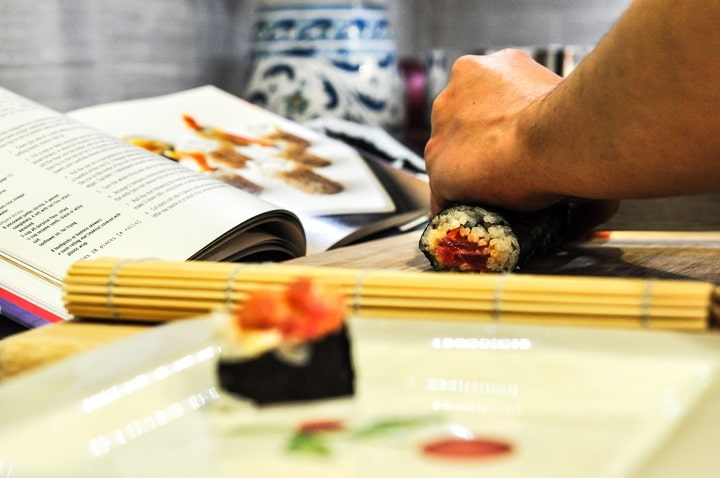 The selection of the interior ingredients is to be done painstakingly because the sushi roll would only come out best if there is coherence in the texture, color, taste, in all the ingredients chosen.

The Bamboo mat: the bamboo mat is a very important tool needed for the production of Tekka maki roll. I would say a quality mat of this type is needed. The bamboo mats are made from pieces of bamboos which are joined by strings. It is a very imperative tool which is recommended by professional chefs for beginners because it enables easy rolling and it would be used as an object where ingredients would be placed.

How To Make Tuna Sushi Rolls

After your familiarity with the various ingredients used in making Tekka Maki, the next thing is a tutorial on how to make the Tekka sushi roll but before that, I want to know if there are any skills required in making Tuna Sushi rolls.

Food and culture in Japan the origin of Tekka maki are not flimsy matters.  A professional chef there may pass through culinary lessons or training for the purpose of learning the steps involved in making a sushi roll. Some of these pros go to the extent of having the skill of ingredient placement or arrangement, measuring and cutting accuracy.

Flowing from the above, the making of sushi might be seen as a cumbersome task but it is very lucid to make at home. Truth be told, you might not perfectly shape the sushi rolls (if you do not pay attention to my guidelines below) but trust me the taste would tantalizing.

The steps to follow in making Tuna sushi rolls. 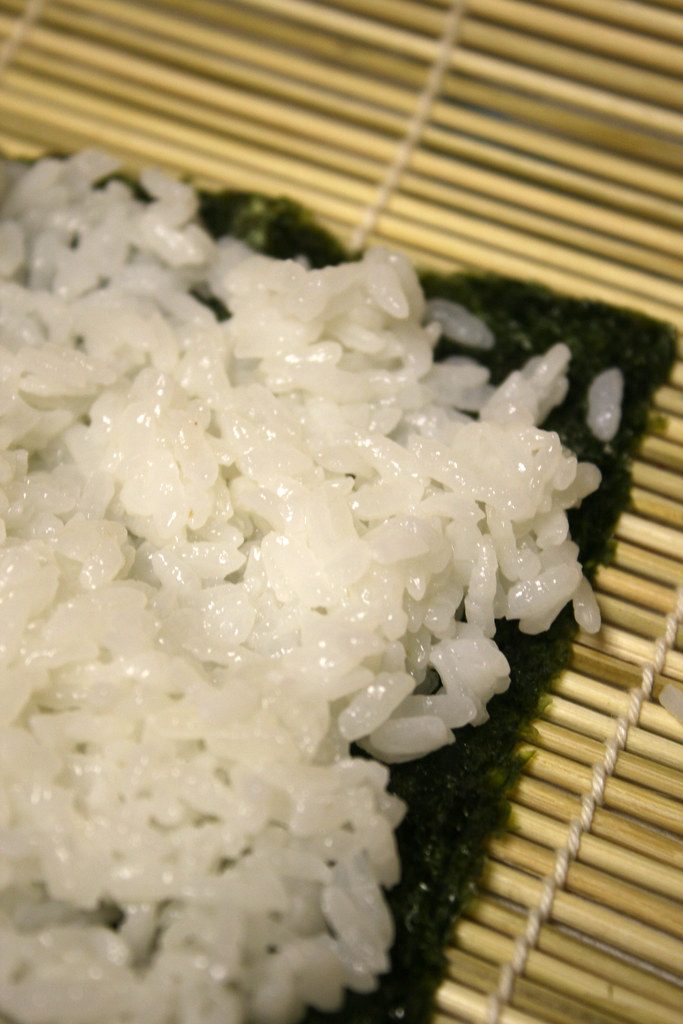 Note: it is better to use a wooden bowl because when mixing, the rice is hot and steamy, so the wooden bowl would absolve the excessive moisture that is in the rice till it gets cold.

After making the sushi rice and all other ingredients aforementioned are available, you are ready to go.

Note: if you want to add other ingredients which I had mentioned earlier or you are not contented with the ingredients used for the illustration, the procedure is still the same;

After adding the sushi rice on the sheet of nori, you add your preferred ingredients, roll the sushi up then you are done making the Tuna roll. Serve it right away to have the taste of the ambrosial banquet.

Apart from being a nice food, tuna sushi, like other sushi have numerous health benefits. The list of ingredients of sushi, it is apparent that the meal is very healthy and nutritious. Sushi contains seafood which is generally known to be highly nutritional. Vegetables are also in its ingredients which are rich in vitamins. It can be deduced that Sushi does a dual task of satisfaction and purification. Below are the numerous benefits of sushi;

I am sure I have raised your urge to consume Tekka maki. Do you wish to make some by your self? It is pretty easy; the knowledge on tekka maki which I have explicitly stated earlier should guide you in the preparation of the sumptuous delicacy. Make sure you get all the necessary ingredients and then you are ready to go. You would enjoy the pleasant taste of the role and the numerous nutritional advantages. What are you waiting for? Start now!