Warning: Use of undefined constant ‘do_shortcode’ - assumed '‘do_shortcode’' (this will throw an Error in a future version of PHP) in /home/customer/www/onthegas.org/public_html/wp-content/themes/yoo_bigeasy_wp/functions.php on line 32
 What Does Triggerfish Taste Like and How to Cook it Perfectly?

If you’ve ever experienced the triggerfish taste, you know that eating triggerfish is a real treat. It is a great fish to try if you are a fan of crab.

The reason being, the white meat contained inside this fish is quite similar to sweet crab meat when prepared properly. If you don’t like crab so much, think about the taste of grouper. It’s identical to that in terms of sweetness. 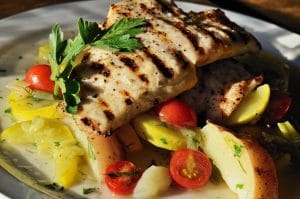 You can bake, fry, or grill triggerfish. And you don’t need to add a ton of spices or flavors—this fish tastes fantastic all by itself. Roasting it in the oven is an excellent way to bring out the natural and delicious flavors.

Plus, this method of prep is very easy and makes for an elegant dinner whether you’re having guests over or just a romantic meal in your home.

So, let’s get right into it – and show you how to make that triggerfish good to eat!

What Is A Triggerfish?

Some of you that are into fishkeeping might have gasped when we suggested that you eat a triggerfish. After all, aquarium fish don’t make good eating.

You should know that there are 40 species of triggerfish found around the world. Fish lovers and divers know all about them. The largest is the stone triggerfish, which can grow up to 3.3 feet long. This particular species is found in the Eastern Pacific Ocean, in the stretch from Mexico to Chile.

Triggerfish are bottom feeders, but don’t let that sway you. They are pretty impressive predators, using their teeth and jaws to consume sea urchins and other creatures that live on the reef.

They get their name from the spines they possess. These spines help them lock into cracks, crevices, and other hiding places. The spine is unlocked when they press a trigger—which is just a piece of their spine.

Triggerfish look a bit feisty due to their toothy mouths, and their appearance is reflective of their nature. They have mean attitudes and are known to bite divers and fish when they come near, especially if they happen to be near a triggerfish nest. 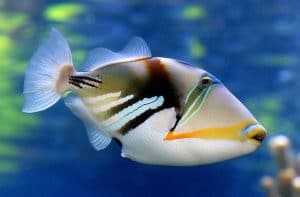 The grey triggerfish is the one to look for when you are ready to try this great meal. These guys tend to be rather small in stature, but the taste is enormous.

In the past, commercial fishermen ignored this species.  But they are now considered a delicate dish and are thus caught along with other popular species.

The meat is clean and white and features a sweet flavor when it is cooked. It’s quite different from other seafood and is excellent for people who aren’t so big on fish, especially if they have an aversion to “fishy tasting” seafood.

Queen triggerfish are another great species to try. People have been eating these for over a century—one article from 1917 discusses the people of Bermuda skinning and then stewing this fish.

Preparing this fish is not difficult, either—in the forthcoming sections, we will talk about ways to make this great meal without stress.

We understand many of you will simply go to the grocery store or head to your local fish market when you have a hankering for triggerfish.

But we also know our audience has a lot of fishing enthusiasts, so read on for how to catch your own triggerfish. After all, there is a certain feeling of pride that comes with catching, cleaning, and preparing your very own meal.

You can find triggerfish in many different places. One great place to catch them is in Florida. The Floridian waters are conducive to the triggerfish as a species. You can also find these fish in the Mexican Gulf near the shore, as well as offshore.

You can also get lucky in the warm waters of the Caribbean and even the East Coast.  In places like Cape Verde, Ascension, and Southern Angola, you can find the triggerfish as well. Even if you live in Canada and Massachusetts, you can pull the trigger on the triggerfish!

Depending on whom you are fishing with, you might hear different names for the animal. It depends on the region too—some names we’ve heard in the past include Reef, Grey, Clown, Balistes, Lagoon, Titan, and in Hawaii the humuhumunukunukuapuaa (don’t worry, you can just call it HumuHumu for short).

If you need a little advice on how to catch yourself a gray triggerfish, here’s what we’ve learned so far.

Firstly, rigging correctly is critical. These fish have small mouths filled up with teeth.

Finding triggerfish won’t be so hard. You likely will find them without even looking. Here’s how to go about reeling in your own.

Remember, these guys are feisty. Use the utmost care and caution when getting the hook out of the fish. They can and will bite with those teeth.

The spine on the dorsal fin is no joke—when turned up, it cannot be pushed back down. You must push down on the second spine to unlock the dorsal fin, which you can then push down.

Now we will talk about the cleaning triggerfish process. We have listed the steps, but it may be more helpful to consult a video or ask a fellow angler for assistance. 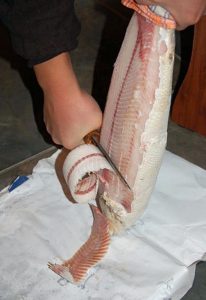 These fish cannot be cut from the outside.

Cooking triggerfish is the fun part. Whether you want to fry or bake your triggerfish fillet, we have you covered!

To Bake Your Triggerfish:

Preheat your oven to 350 degrees F. and cover the bottom of your baking pan with olive oil so that your meat does not stick.

Now put your triggerfish into the pan and sprinkle a bit of lemon or lime juice over the top. You can also season with salt and pepper to your taste.

Once they are flaky and opaque, they are done and ready to enjoy. Serve hot.

Broiling is one way we make triggerfish edible.  It’s another easy way to enjoy this delicious fish.

Baste your broiler pan as well as your triggerfish using olive oil. Put the fillets into the pan. Use a bit of lemon juice or lime juice over the top and season with salt and pepper as you like.

Now put the broiler pan into the oven. Broil it for two minutes. Now turn over the fillet and baste it with some more lemon or lime juice—only if it looks dry.

Now put the fillet back into the oven and broil it for two more minutes. Make sure you keep a close eye on this so that you don’t overcook the meat. Once these fillets are flaky and opaque, you can serve them.

Pull them out and serve while they are nice and hot.

Fried fish is always a treat. Begin by cracking two eggs into a bowl. Now season them with salt and pepper. Mix it all up with a whisk. 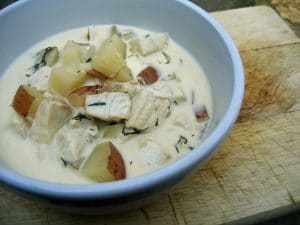 Now in a separate bowl, pour in some flour. For us, 2 cups were enough. Dredge the pieces (that means dip the meat into the egg mix and then into the flour). If you like your coating extra thick, repeat the dredging step.

Now heat 4 cups of vegetable oil in a deep skillet. Use high heat for this. Once the oil is at 375 degrees F, it is ready to fry up your fish chunks.

Now carefully add the triggerfish chunks a small bit at a time, frying for ten minutes. Turn them over and make sure that they are evenly cooked.

Now use a skimmer and place them on a plate covered in paper towels. Serve the chunks fresh and hot. You might also add a lemon slice and some tartar sauce on the side, but this is truly not needed for such a delicious fish.

With a tasty flavor, pleasing texture, and sustainable existence, the triggerfish is a favorite among seafood connoisseurs and people who typically say, “I don’t like fish.”

After all, the sweet triggerfish taste is great just on its own. Unlike some fish that people tend to cover in lemon pepper, tartar sauce or other toppings, the triggerfish is truly perfection all on its own.

How do you think you will prepare your triggerfish? The best thing to do would be to try all three different ways and then research some different recipes that call for this sweetmeat.

It will no doubt become one of your favorite meals!