Of all the things that come with your sushi order, wasabi & ginger just so happen to be two of the most important staples.

Sushi is widely known all over the world. I doubt there’s anyone who hasn’t heard of sushi. Wasabi and ginger,  accompanied by the wide variety of seafood with rice, constitute this dish we know as sushi.

Sadly, wasabi and ginger are two ingredients that many sushi eaters, including some sushi-lovers, do not know how to use. Whether we end up with extra wasabi or add the ginger straight onto the sushi, we all get a little confused on just how we are supposed to use these ingredients.

And as if that’s not enough trouble, there are also the chopsticks to consider. Some say eat with chopsticks, others say don’t, but what exactly is the right way? You’ll find out soon, but before then, let’s have a little introductory lesson on sushi. 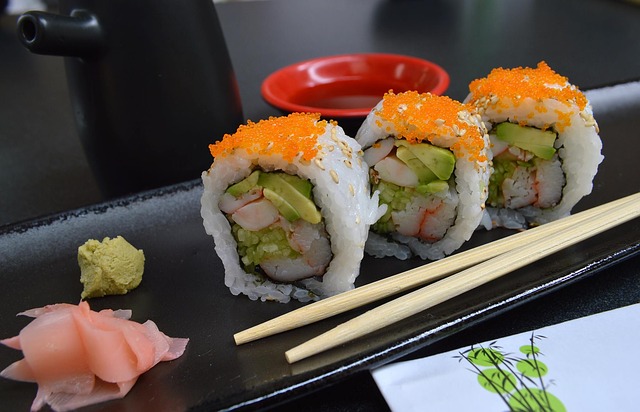 The first thing to know about sushi is that it’s a Japanese dish, but of course you already know that (my 10 year old self didn’t, she thought it was Chinese). Sushi as we know it is different than in the past. It used to be fermented fish preserved in rice. During the Edo period of Japan, the dish evolved to what it now is.

A dish is generally considered to be “sushi” if it is made with vinegar sushi rice (shari). The dish also comes with raw fish or other raw seafood, except in very few cases where the fish might come cooked, as seen with eels.

You can get vegetarian sushi too. There are so many kinds of it around and all are really delicious choices.

Here’s a quick list of some basic kinds of sushi to get started if you’ve yet to try it:

This dish has a wide variety of flavors and textures, and there are different types of sushi too.

Though there are different types, they all have one basic thing in common—the sushi rice, called Shari, which is vinegar rice. That means that if it looks like sushi but doesn’t have rice, then it ain’t sushi. It’s probably just another variation of the dish.

Is Sashimi a Type of Sushi or Another Dish Entirely?

Sashimi is made without rice and that’s pretty much enough to disqualify it. Yet, many people still consider sashimi a type of sushi. These terms have also been used interchangeably, but technically this is wrong since they’re two different dishes. 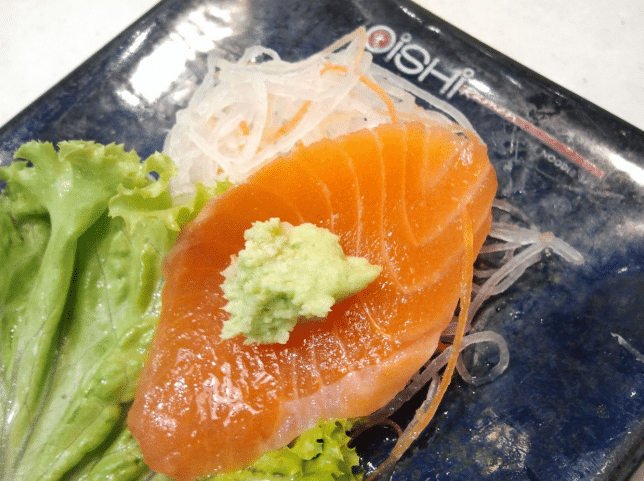 Sometimes, sashimi is served alongside sushi orders in a restaurant, but that doesn’t make it sushi. Some basic differences exist between sushi and sashimi, and they are:

The placement and purpose of wasabi: Wasabi is actually placed in between the rice and fish slice for sushi while for sashimi, it isn’t.

The wasabi is served on the side of the plate, and though it is commonly mixed into the soy sauce by some people, that’s not how the chef was hoping it would be used, or else he would have mixed the wasabi in soy sauce himself. Mixing it in ruins the taste and flavor of both the wasabi and the soy sauce.

To eat sashimi, add a little quantity of wasabi on one side of the slice of fish, dip the other side into the soy sauce, and eat it that way. The wasabi should not make contact with the soy sauce.

What To Eat With Sushi

Sushi can be served as either an appetizer or as the main course, though it is more frequently served as the main course. This Japanese dish can be eaten without anything else. On its own, it provides you with a wide array of flavors and can be quite filling. 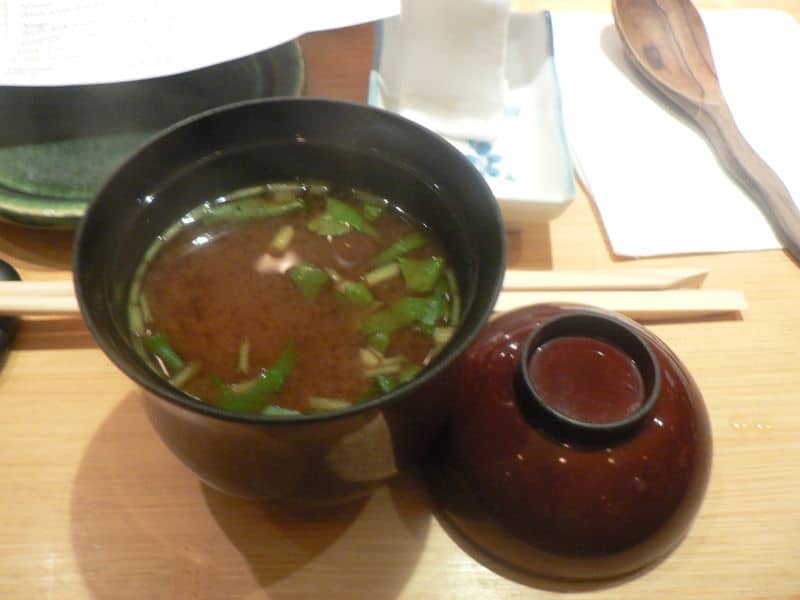 But then, if you decide to not eat your sushi alone, there are some really delicious side dishes, condiments, and drinks that could go with sushi. 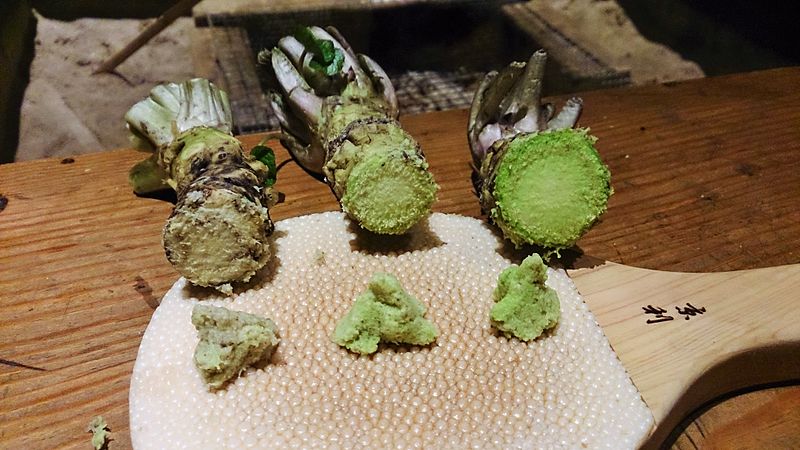 If you know something else that can be eaten with sushi, then, by all means, add it to the list.

How to Eat Wasabi With Sushi

Wasabi, or Japanese horseradish, is made from a plant of same name, wasabi. It is a paste made from grating the rhizomes, or the stem. It is a spicy pungent, condiment for sushi and other foods.

This spicy condiment stimulates the nose more than the tongue, so don’t be surprised if your nose starts prickling even though you can’t feel any burning sensation from your tongue—that is sure to happen if you eat too much of this.

The paste is freshly prepared by most sushi chefs, especially those in the high-end restaurants, who prefer to ditch the wasabi that comes in a tube. The paste is somewhat volatile, and as such, will lose its flavor in less than 10 minutes if left uncovered. That’s a good reason why Itaeme serves well with wasabi between the shari (sushi rice) and the neta (slice of fish or seafood).

The proper way to eat sushi with wasabi is to not order extra wasabi, nor mix it in the soy sauce. Though common, the whole idea of ordering extra wasabi is very wrong. First, your sushi chef considers it slightly insulting. For each sushi, the chef has taken accurate care in adding just the right amount of wasabi that would go well with each fish so as not to overpower the fish’s subtle flavor. 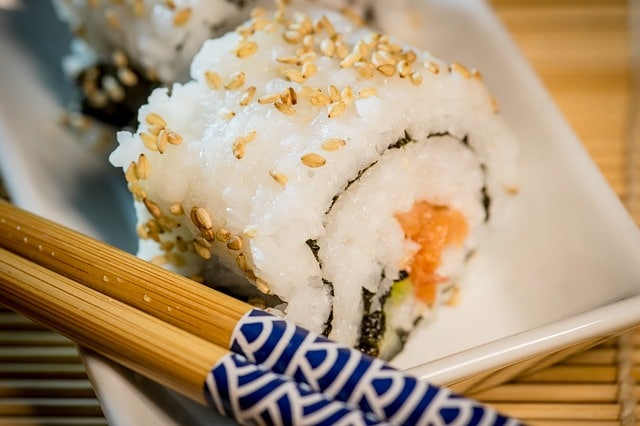 So there’s really no need in having extra. Besides, this will give your chef a good reason to keep his best fish for the customer who won’t be having extra wasabi.

Because he knows that a customer who asks for extra won’t be able to tell the difference between the good fish and the best fish, due to the overpowering nature of the extra wasabi. Instead of enjoying the sushi, you end up enjoying a spicy condiment.

And just as with sashimi, do not mix the wasabi in the soy sauce. It ruins the taste. Considering the fact that the chef freshly prepared it, you owe it to him to use it rightly.

The purpose of the wasabi is not only to soften the smell of the fish. It has antimicrobial properties and helps to kill any bacteria that would have the potential to cause food poisoning. Wasabi is different from American horseradish, which can be modified or mixed with mustard and food coloring to serve as an inferior substitute for wasabi.

If you can’t handle the wasabi burning effect, don’t forego it. Instead, drink a cup of freshly squeezed lemon juice with a little vinegar an hour before you eat wasabi. Saltwater and vinegar can do the trick too!

That’s how to eat wasabi with sushi. 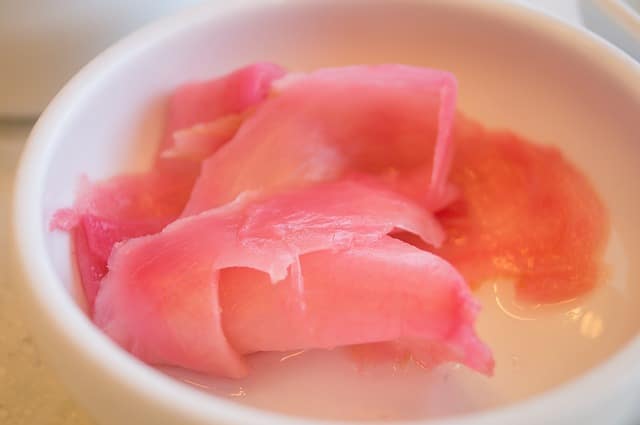 How to Eat Ginger With Sushi

The sushi ginger, also known as gari, is sweet, pickled, and sliced. It has antimicrobial and antifungal properties which are particularly useful since it’s accompanying a dish that has a raw ingredient.

The gari is always served with the sushi, and it is meant to be picked up with chopsticks, not with bare hands. The pickled ginger actually serves as a palate cleanser and aids the digestion process.

As a palate cleanser, it is not meant to be picked up by the chopsticks and dumped on the sushi. It is to be eaten on its own between sushi bites. That is, it refreshes your palate for the next sushi piece that goes into your mouth; that way, you get to enjoy the taste of every sushi without the previous bite overpowering the flavor of the next.

If eaten with the fish, as most people do it, its stronger flavor overpowers the very subtle flavor of the fish. Another good reason why your chef might wince from offering you the best fish.

Think of the ginger like a drink—you only sip from it after chewing. So it is with the ginger…it is eaten only after a piece of sushi has been completely devoured.

How to Eat Sushi the Right Way 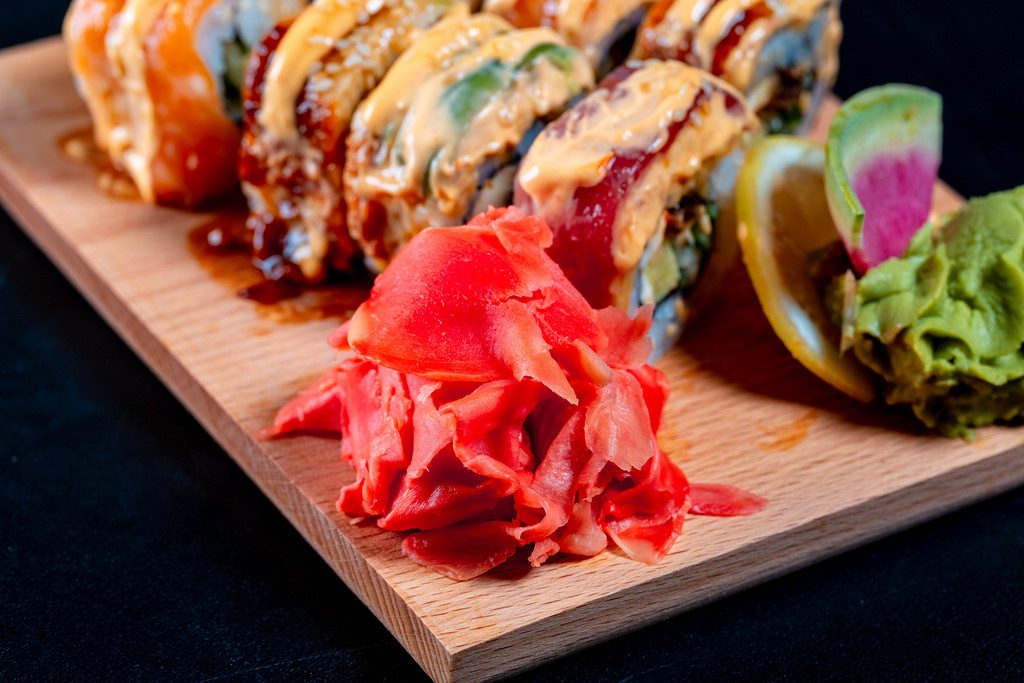 Learning and mastering the art of making sushi can take years, and these sushi chefs have spent a good part of their life learning this art. So, the best you can do is to eat it the right way and really, the right way is also the most enjoyable way to eat sushi.

Of course, no one is going to scold you if you decide to make a sweet mess of mixing your wasabi in soy sauce or split your one piece of sushi into two. Just remember what you’ll be missing out on.

Enjoy your sushi with wasabi and ginger.