Eggplants can be a little confusing to some people. You might know them as their other name, aubergines. They are actually fruits, so there are seeds and a slightly sweet taste when you make them.

Eggplants are distantly related to peppers, tomatoes, and potatoes, making them a member of the nightshade family. However, they were misunderstood for a really long time. Looking back into history, people thought they were poisonous. 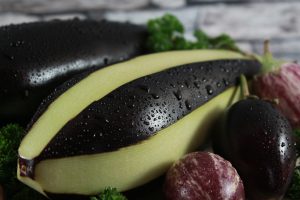 Eggplants are an extremely nutrient dense food, which means that they have a great amount of vitamins, minerals, and fiber within its calorie count.

On average, a one cup serving of raw eggplant has the following nutrient breakdown:

There are also small amounts of other nutrients that you need in your diet, including niacin, magnesium, and copper. Eggplant is an excellent food for brain health, antioxidants, and cardiovascular health. You do need to be careful how you prepare it, because many of the recipes that call for frying or battering the eggplant will completely nullify the nutritional value. Be sure to balance out your meals.

When Should I Eat Eggplant?

Eggplants taste the best in late summer when they have reached their full maturity. You want to get your eggplant as fresh as possible because they do go bad after some time. There are a few different varieties and they become ripe at different times, so you should purchase them from August through October for the best flavor. However, eggplants are pretty good even when they aren’t in peak season.

How Does Eggplant Taste?

Eggplant can taste radically different, depending on how you prepare it. When you eat eggplant raw, it is somewhat bitter. Some people love the taste and some people don’t. It is spongy when it is ripe but can quickly become mushy. 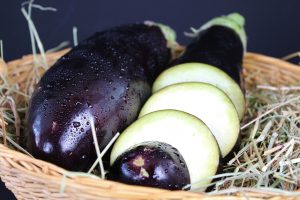 Once you have cooked the eggplant, most people will agree that it tastes much better. The taste becomes far milder and the texture is creamy. People will actually use eggplant in sauces because of how creamy it can get.

How to Choose an Eggplant

When shopping for eggplant, it is important to take your time. Not all eggplants are going to taste the same. You want to pick up the eggplant and feel it. The heavier your eggplant is, the better off you will be. If it surprises you with how heavy it is, you should definitely pick that one.

Look for skin that is vivid and glossy. It doesn’t have to be perfect, but try to avoid too many scars or blemishes. You should be on the lookout for bruising, however, as that indicates there is something wrong with the flesh on the inside.

How Can I Store Eggplant?

To start, you shouldn’t store eggplant for a long time. Try to use it within 1-3 days of purchase because that is when it will have the best flavor and will be easy to work with. Eggplant is a delicate fruit and won’t store well, especially if you store it near other produce.

Store your eggplant in a cool, dry, and dark area. However, do not keep it in the refrigerator. Eggplant should be kept in a more temperate climate as this best mimics where it was grown. Do not cut your eggplant until you are ready to use it. Cutting it will speed up decay. 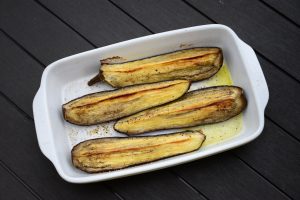 If you are just starting out learning how to cook with eggplants, there are a few different recipes you could try. These are tried and true recipes that aren’t too difficult.

The most basic recipe is just to puree a roasted eggplant, mix it with garlic, tahini, lemon juice, and olive oil to your preferred taste. This is called babaganoush, and it has plenty of uses.

You can use it as a dip for your favorite cut up vegetables, use it in place of mayonnaise on certain sandwiches, or use it alone in a sandwich.

You can also mix cubed eggplant into your favorite roasted vegetables or steamed vegetables. It will break down a bit, but the flavor is great. Top baked eggplant with garlic, onions, and balsamic vinaigrette for a tasty salad. If you love stir-fry, try to add it to your next vegetable mixture.

There are just so many ways to try eggplant that won’t be too difficult if this is your first time working with the fruit.

Can I Eat Eggplant Raw?

There is a lot of controversy over whether or not eggplants can be eaten raw. For a long time, people thought that eggplants were poisonous, then the myth became they were poisonous until you cooked them. However, we know the truth is that you can eat eggplants raw.

This rumor stems from the fact that nightshades, like eggplant, have an alkaloid called solanine, which can be dangerous. However, you will need to eat 36 raw eggplants before you get too much solanine. You’d have to eat them in a very short amount of time, which is basically impossible. When you cook the eggplant, most of the solanine goes away.

Now, some people have reacted to the flowers and leaves of eggplants, as they are toxic.

There is no need to be concerned about eating a serving of raw eggplant. (However, do not eat raw green potato, as that does have a dangerous level of solanine in it.

Some people have discovered that they cannot eat raw eggplant because they are allergic to it, but they are not allergic to cooked eggplant. Sometimes, people will be allergic to the skin of the eggplant. As long as you cut the skin off, you should be fine. The skin can cause rashing in some people, but it goes away quickly.

The only problem with eating eggplant raw is that most people just don’t like the taste.

How Can I Make Eggplant Taste Good?

Taste is subjective, so you might think that eggplant tastes naturally good. While you can eat it raw, the best way to make eggplant taste good is to incorporate it into another dish or to grill it. Some recipes will tell you to salt the eggplant before you cook it to take out some of the bitterness.

Other people will tell you to cut out the inner core and remove the seeds. Truthfully, there isn’t a “one size fits all” answer to how to eliminate the bitterness of eggplants.

The best way to make an eggplant taste good is to buy it fresh, store it properly, and use it quickly. The older your eggplant gets, the more bitter it will become (it is kind of like people in that way). When you buy an eggplant at a farmer’s market or directly from the farmer, you are getting the freshest possible eggplant. 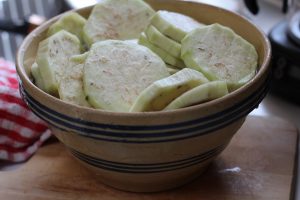 If you buy from a grocery store, it has likely traveled some distance and is already older when it gets to the store. Then, it sits on the shelf until you purchase it. You are already starting out with an older product.

If grocery store eggplants are your only choice, you will need to take some further steps to make it taste better. Everyone will tell you different ways to make your eggplant taste less bitter, but the best method is to salt cut or sliced eggplants and then allow them to sit for a few minutes.

Eggplants are a great addition to any meal, and the more you learn how to cook with them, the better you will be. They can make a great replacement for certain fattier foods, so if you are learning how to cook healthy, this is a great place to start. You aren’t going to get everything perfect on the first recipe, so keep working and learning the different flavors.

Once you’ve mastered it, you can start looking into different kinds of eggplants. While they may be harder to get, it will be worth it to explore the different options you have.