Depending on where you live, lobster can be very expensive. Of course, if you live near where lobster catches are brought in fresh daily, it can be cheaper than chicken. You might be surprised to learn that not all lobster taste the same. The lobster flavor can change with the cooking method and with the type of lobster.

If you are like me and live in a landlocked area that is thousands of miles away from a seacoast, lobster is a special occasion treat. I was an adult before I ate even a tiny bit of lobster or crab, although freshwater crayfish are a local dish.

My personal take on lobster flavor is that it is just a tiny bit fishy, a little bit like white fish only a lot richer and more delicate. I like to have just a bite or two with other food. I have a friend who loves lobster and crab, so dining together is perfect for us. We can split one order of lobster or crab, and both be perfectly happy with our portions.

There are two primary types of lobster: Cold water lobster and warm water lobster. Each is unique in taste although both share that oddly bland yet extremely rich flavor. It should be noted that different parts of the lobster have a slightly different flavor.

Cold Water lobster are often caught near Canada or Maine in the United States, off the coast of Europe, or in cold water areas near Australia, as well as some other areas. Cold water lobsters are the ones with the big claws. If you love the claw meat, then you will want to purchase cold water lobsters. They tend to have a stronger, more robust flavor.

Warm Water Lobster do not have the large claws. Instead, they have large antennae. There are several varieties of warm water lobster including three species that are sometimes referred to as red lobster. These are Eunephrops bairdii, palinurus elephas, and Panulirus interruptus. 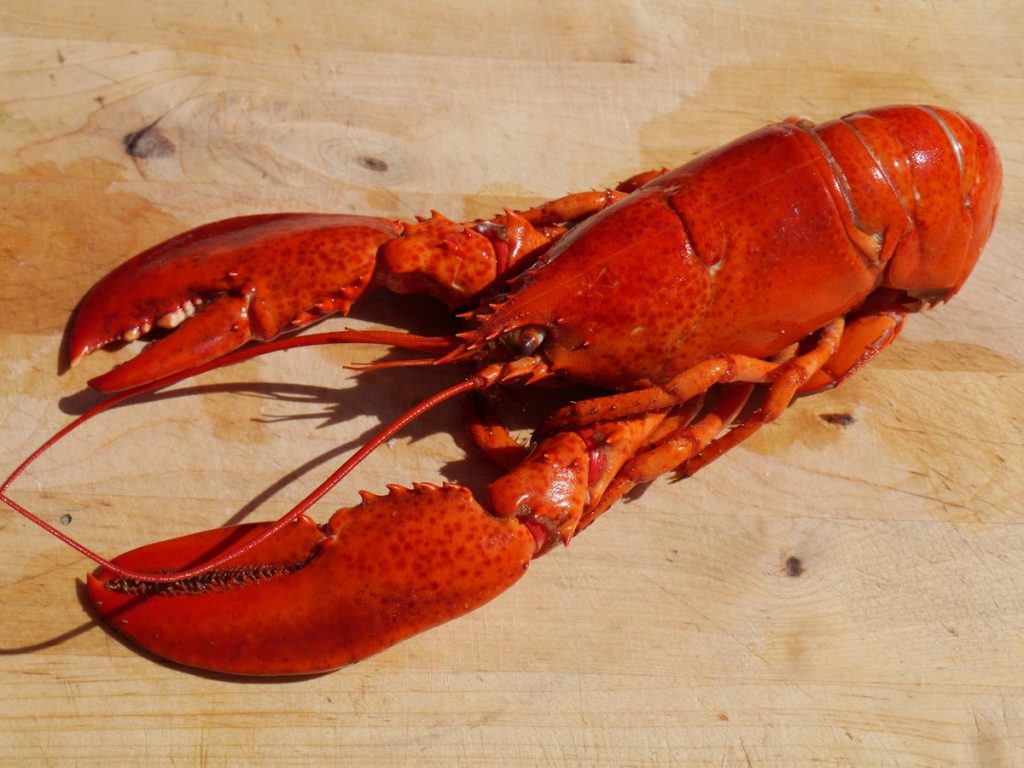 Eunephrops bairdii is a rare sort of lobster that is found in the Caribbean Sea, off the coasts of Panama and Colombia. It is red in color before it is cooked, but the species is too few in number for commercial use.

Palinurus elephas is sometimes referred to as red lobster. It is a spiny lobster, no big pincer shells, just lots of legs and stalks. Its other common names are European Spiny Lobster, common spiny lobster, and crayfish, or cray. They are reddish brown, with spots. It can be found in the Mediterranean and off the coast of Europe.

Panulirus interruptus is also known as the California Spiny Lobster. It is a reddish brown with stripes on the legs. It has enlarged antennae, but no claws. It can be found in the Pacific Ocean along the southern coast of California and the western coast of Mexico.

It is prolific and is often subject to commercial and recreational fishing. It has a more delicate flavor than Maine lobster, for example, and is in great demand in China. Consequently, its price has gone up considerably since the year 2000.

Lobster season is subject to fish and game laws in most areas. This is to protect them during their molting season or to spread the predation of them around so that excessive numbers are not captured during their most vulnerable time.

Lobsters all go through a molting stage. 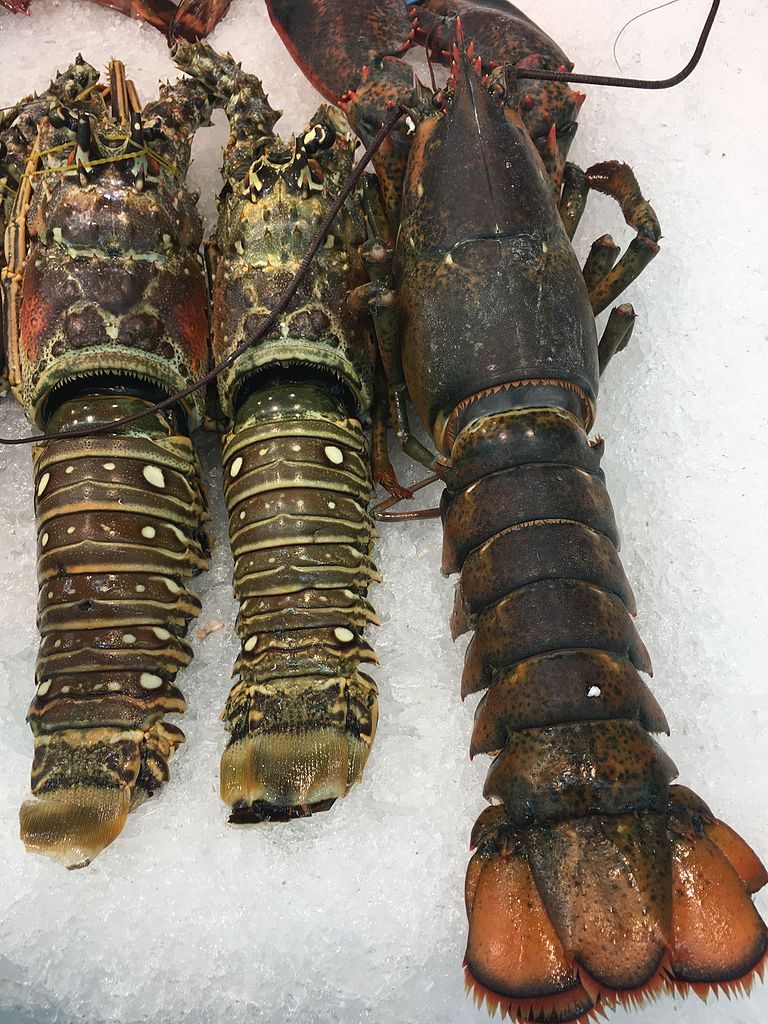 As they grow, they become too large for their shells. When this happens, they slip out of their carapace, and grow a new one. Lobster that have hard shells are easier to ship than those that are soft shelled from going through a recent molt. Lobster can often be more expensive during a molting season, unless you live close to an area where they are grown.

In any case, the safest way to make sure that your lobster isn’t a bacteria factory is to purchase a live lobster or a frozen one and cook it just before dining. Frozen lobster tails are a good choice, and mean that you don’t have to deal with killing a live lobster at home. You cook them by simply taking them directly from the freezer and popping them into a large pot of boiling water. Simmer for eight to twelve minutes or until the carapace turns bright red.

The most basic lobster flavor comes from boiled lobster. Meat from a boiled lobster is similar to a meaty shrimp, but a less fishy and a lot richer. When the lobster is boiled for twenty minutes in hot water, you have the essential red lobster taste. Red lobster, or warm water lobsters, tend to have a more delicate flavor than their cold-water cousins.

Lobster can also be soaked in marinade, dipped in butter, and served raw as lobster sashimi. Lobster has such a delicate flavor, it tends to take on the flavor of the sauce or butter that it is dipped in. Raw lobster flavor is reported to be sharper, more piquant and to not be as chewy as boiled lobster. 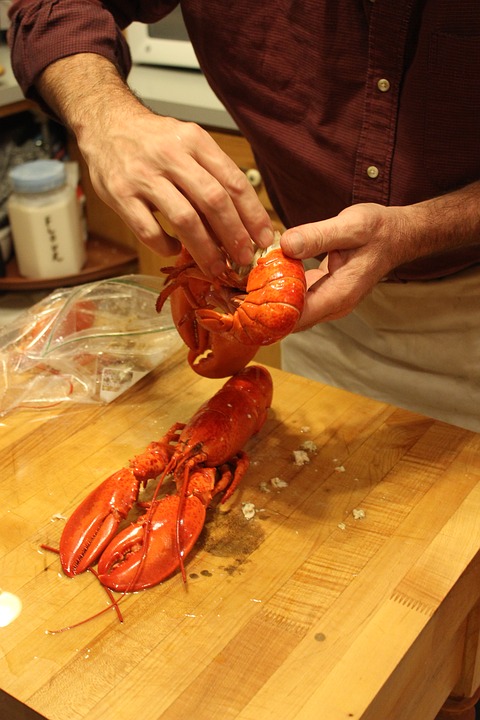 Lobster is traditionally alive when placed in the boiling water. This is because lobster harbor vibrio bacteria which multiply rapidly on their carcasses, even after cooking. Vibrio can cause humans extreme gastronomic distress, and even death. Boiling kills most of the bacteria, making the lobster safe to eat. Even so, it needs to be eaten soon after preparation because even cooking does not completely destroy vibrio.

The big problem with vibrio is that it can multiply in shellfish and lobster at an extreme rate. Even cooked lobster can become unsafe within a few hours. Fortunately, it isn’t hard to tell if lobster can be eaten. The vibrio bacteria give off a distinctive ammonia smell. If your lobster smells like floor cleaner, best not to eat it. 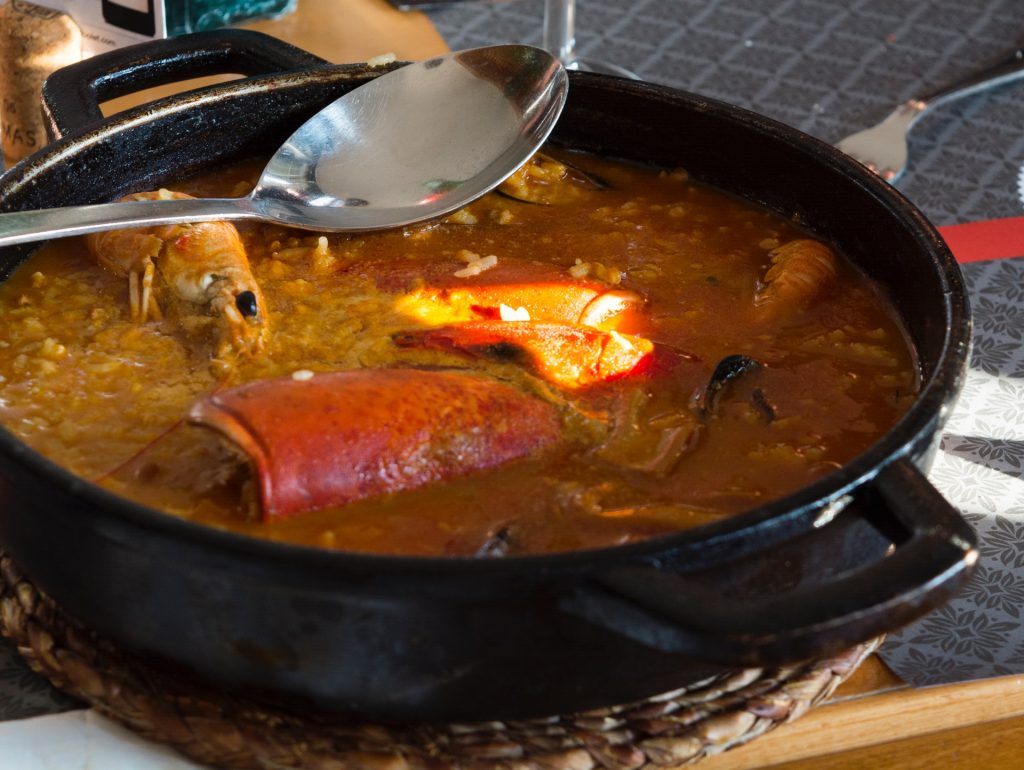 Live lobsters are often preferred by epicureans to frozen although both can deliver that wonderful lobster taste. Some chefs prefer the sharp knife method for dispatching a lobster. They believe that plunging a live lobster into boiling water causes the lobster meat to be tough.

Once the lobster is dead, it should be grilled, boiled or steamed right away to avoid those microscopic hitch-hiking bacteria. Sometimes it is even served raw, as lobster sashimi. Again, it should be prepared and served within one or two hours. Like other seafood used for sashimi, it is a good idea to know the source of the lobster.

When served raw, the lobster is dispatched using the knife between the eyes method, and the tail meat is served immediately. The rest of the lobster is used in miso soup. Again, the key is to eat the lobster right away so the bacteria doesn’t get a chance to multiply. Still, lobster sashimi is considered somewhat risky eating. 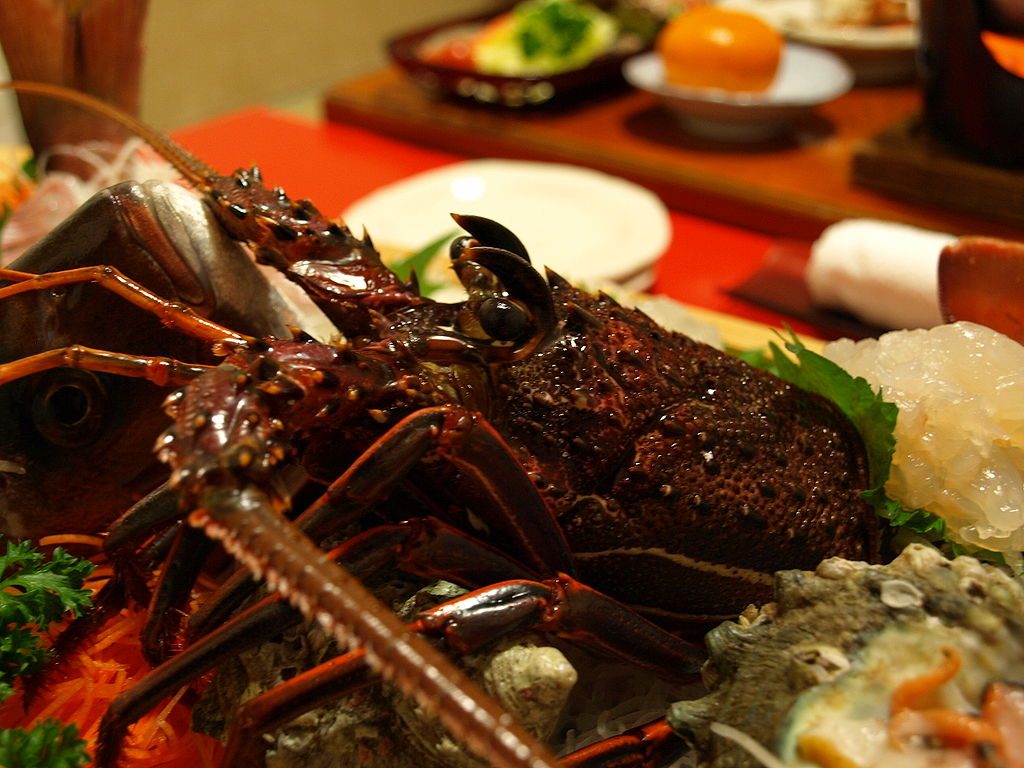 With that said, it is also reported to be delicious. One diner commented that oysters are just as likely to harbor vibrio bacteria and that more people become sick each year from eating oysters than from eating lobster.

For those of you who love sashimi, it just might be worth trying. Personally, I tend to be a little more conservative with my food choices. I don’t even like rare steak, so my lobster is likely to be cooked.

What to Serve with Lobster

Lobster is rich, and a little bit of it goes a long way. The flavor is delicate, so it is a good idea to keep the sides simple. Depending on your mood and the meal, they can be light or they can be more robust and filling. The light taste of white wine is considered to be a better choice than red wine.

By extension, a lemon-lime soda is probably a better selection to serve with lobster than a cola drink. Here are a list of foods that can go well with lobster. 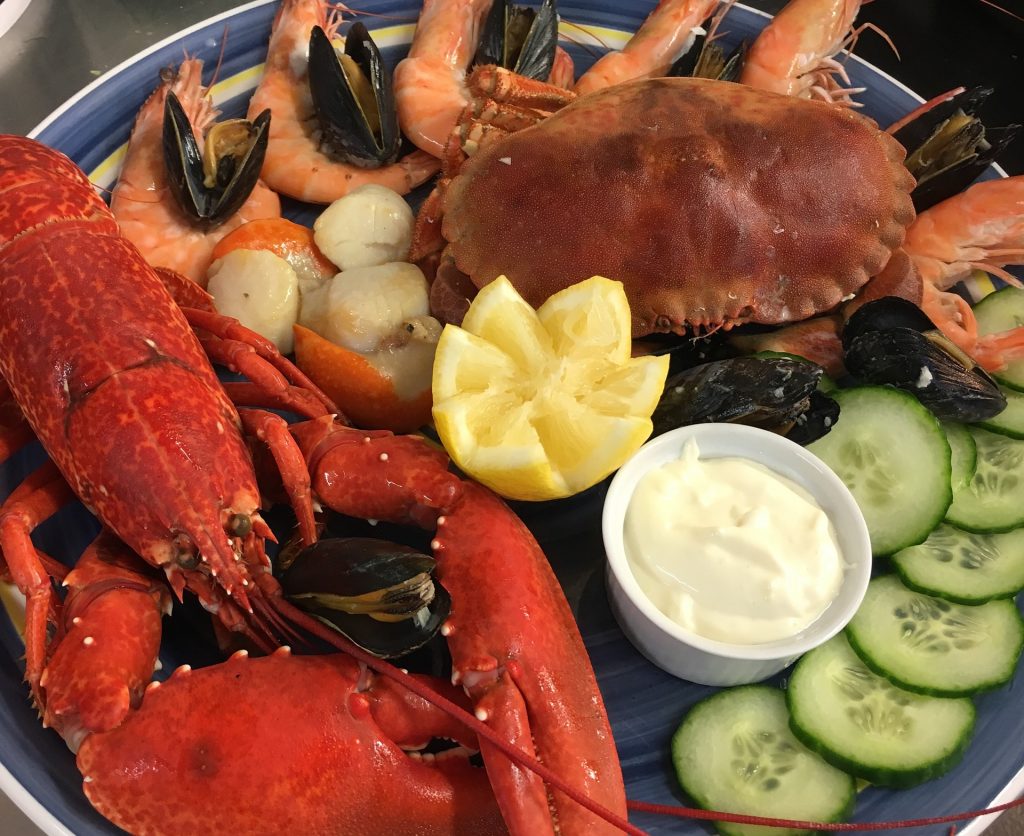 Comparing lobster taste vs crab taste is like comparing chicken vs duck. You have a similar flavor. Crab is sweet, delicate and only a tiny bit fishy. It is as if shrimp grew up and became sophisticated, only so much better. A small amount of crab goes a long way because it is so very rich. Again, different types of crab will have different flavors. Alaskan king crab has a robust, incredibly rich flavor, while snow crab is lighter and more delicate.

Like lobster, you can serve crab legs with nothing more than a dish of clarified butter and bread or baked potato to counteract the rich flavor. The above list of foods to go with lobster also work well with crab. You know the saying, “It takes two to tango.” Crab legs and clarified butter tango beautifully together. Add a fresh salad and you have a symphony of flavor that just can’t be beat.

Remember that part about lobster being cheap if you live next to the ocean? That holds true for crab, as well. That is probably how New England Style Crab Boil originated. It isn’t very different from a regular boiled dinner, other than it takes a lot less time to cook crab than it does to boil beef of any kind.

To make a New England Crab Boil, first boil the seasonings. Onions, thyme, bay leaf and your favorite cooking wine are good choices when added to a large pot of water. Next, add new potatoes, baby corn, and smoked sausage. Cook fifteen or twenty minutes, or until the potatoes are tender. 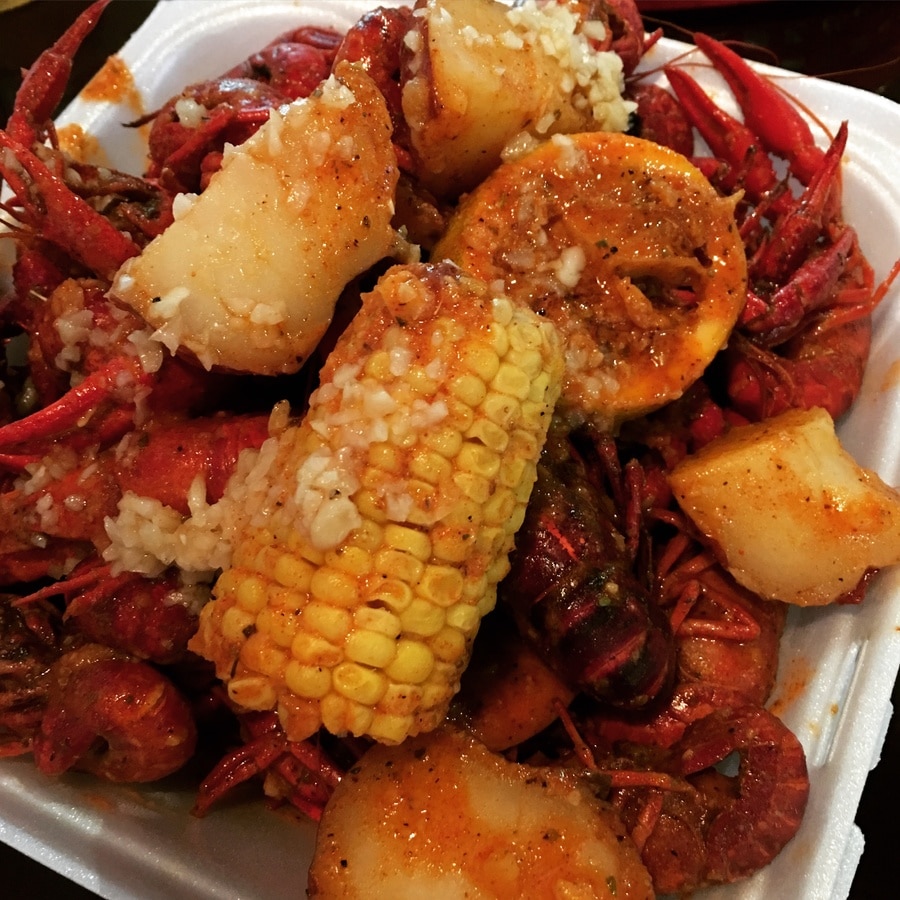 Finally, add deveined shrimp and crab clusters. Continue cooking five to eight minutes until the shrimp are pink and fully cooked. You can serve it on a platter garnished with shrimp, or you can serve it right out of the pot.

One of my favorite fantasy books describes making New England boil in a large pot right on the beach. There was moonlight and dancing involved. It sounded incredible, so I had to try the dish. Even minus the dancing and moonlight, it is a scrumptious feast and not at all difficult to make even if you are from a landlocked part of the world that only sees salt water in a fish tank.

Summing up Lobster and Crab Cookery

There are regional delicacies that don’t measure up to their reputation. This is not true of lobster or crab. Both are delicious and can easily be prepared by the most amateur cook, especially if frozen. All you need to have an excellent meal is a pot of boiling water, some clarified butter, a crisp green salad and your seafood selection. In less time than it takes to make fried chicken, you can serve up something both delicious and special.

Watch your local supermarket for a sale on seafood. They do happen occasionally, even in the midwestern part of the United States. I’m sure you now have the answer to the question ‘what does lobster taste like?’ Use the opportunity to serve your nearest and dearest an unusual feast or just treat yourself. You won’t be sorry. 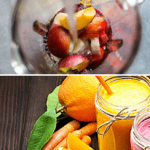 Vitamix 750 Review • Could There Be a Smoothie Superhero 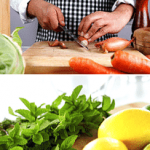